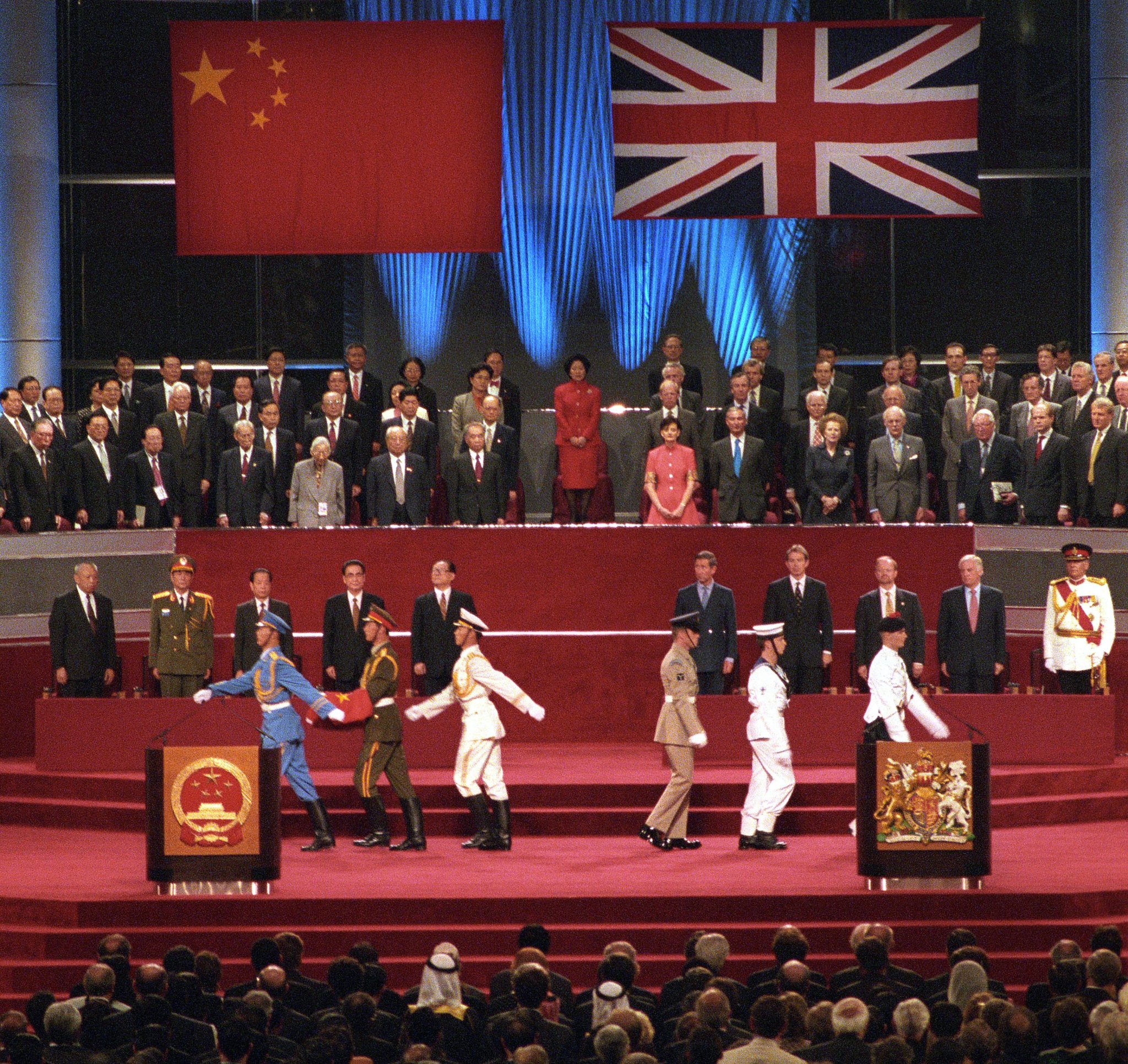 In 1997 Hong Kong was facing an uncertain future. Optimists clung to the promise of ‘jam tomorrow’ while pessimists took the first flight out. Twenty years on, realist Keith Richburg, says China’s growing involvement in Hong Kong’s affairs is here to stay, so get used to it.

The official handover ceremony was a lavish display of Chinese pomp and pageantry.

There were fireworks and flyovers. There was pageantry and protests. There were bagpipers and lion dances, colonial-themed dinners and raves. There was even a flotilla of illuminated giant pandas floating in Victoria Harbour.

There was also the Handover kitsch — postcards, T-shirts, coffee mugs, “Red Dawn” beer, commemorative Reebok training shoes in the red and yellow colours of the Chinese flag, even a Handover-themed Barbie doll in an empress dress and long black tresses.

And then, when it was all over, when Hong Kong was officially handed back to the People’s Republic of China and after Chris Patten, the 28th and last British governor boarded the Britannia with Prince Charles to sail away, there was, for the most part, quiet.

For all the anticipation and drama leading up to that momentous day 20 years ago, the weeks and months that followed seemed strangely anticlimactic.  Business went on as usual, the shopping malls were full, the streets and bars of Lan Kwai Fong and Wanchai were just as packed on weekends, and Hong Kong settled into what appeared to be a period of mundane normalcy. The flags changed, and the police replaced the old British crown insignia on their uniforms with the new bauhinia flower emblem.  But things remained remarkably the same.

A bird flu scare briefly made headlines, but the legion of foreign reporters based here, including myself, were soon heading to Southeast Asia or to Seoul, where the biggest story in the region was the unfolding economic crisis that had collapsed local currencies in South Korea, Thailand, Malaysia and Indonesia and brought angry protesters out into the streets. Other foreign journalists rebased to Shanghai or Beijing, as China was seen as the bigger story.

If Hong Kong in those days became an afterthought, it was because many of the most dire predictions did not come to pass. The People’s Liberation Army, despite sending a 500-man contingent over the border before the official midnight change of sovereignty, kept a decidedly low profile. There was scarcely any visible mainland presence at all.

Among Hong Kongers I spoke to at the time, including those in the pro-democracy camp, there was a general feeling of cautious optimism. Hong Kong’s new rulers in Beijing appeared to be keeping to their pledge to grant the territory “a high degree of autonomy” and refrain from meddling in its internal affairs. The untested formula known as “one country, two systems,” that was supposed to allow Hong Kong to maintain its independent courts, its competent bureaucracy and its free press, free speech traditions, just might work after all, many believed.  And in two decades time, Hong Kongers would be allowed to vote freely for their own leader under the principle of universal suffrage, one person, one vote.

It was democracy delayed, to be sure.  But democracy was coming, at a fixed date in the future.

China’s president at the time, Jiang Zemin, tried to sound benignly reassuring during the Handover ceremony.  This former colony, he said, measuring his words carefully, “shall gradually develop a democratic system that suits Hong Kong’s reality.”

The PLA arrives in Hong Kong.

In 1997, twenty years seemed like a long time off.  China itself was changing rapidly, becoming more affluent and more open — and surely, it was thought, eventually more democratic.  China was taking over Hong Kong, but in twenty years, surely it would be Hong Kong’s free and open system that would eventually take over China?

Among certain China scholars — academics and journalists — there were even open predictions that the Leninist party was in its final throes, following the collapse of Communism in the former Soviet Union and across Eastern Europe and the fall of Suharto’s crony capitalist regime in Indonesia.  There was much talk about “the Singapore model,” where China’s Communist Party would remain dominant, but compete in elections with other smaller parties.

But twenty years goes by quickly.  And China’s Communist Party is arguably as strong as ever under Xi Jinping.  Xi is this year about to be reelected to a second five year term, and will have a chance to assemble his own team around him in the powerful Politburo Standing Committee; there is even talk he may stay on beyond the traditional two terms. His anti-corruption drive has been more sweeping than many anticipated, as he sets about remaking the party’s image. Dissent has been largely stifled.  The internet and social media, once seen as vehicles for popular mobilization and social change, have been thoroughly co-opted and controlled.

China’s global footprint is also expanding, with its “One Belt, One Road” initiative, and the establishment of the new Asian Infrastructure Investment Bank.  As President Donald Trump pursues his “America First” policy and appears ready to retreat from the world stage — for example, withdrawing from the Trans-Pacific Partnership trade pact, threatening trade wars and tariffs — China is eager to step into the void. In January, Xi became the first Chinese president to attend the annual World Economic Forum in Davos, where he took the decidedly un-Trumpian position as a defender of globalization and free trade.

Two years ago, in a widely-circulated article, Arthur Kroeber of GaveKal Dragonomics, an economics research firm, made a persuasive case debunking the drumbeat of predictions about the imminent demise of China’s Communist Party.  “Here’s the truth: the Chinese state is not fragile,” Kroeber wrote. “The regime is strong, increasingly self-confident, and without organized opposition. Its economic management is competent and pragmatic. Its responsiveness to social pressures on issues such as the environment is imperfect, but well-informed by research and public opinion surveys. It derives real legitimacy from its consistent demonstrated ability to raise living standards, provide a growing range of public goods, and maintain a high level of order while mostly letting people do what they want in their daily lives (unless what they want is to organize against the government).”

“In short,” he concluded, “China is a successful authoritarian developmental state which is now rich enough to start setting its own rules rather than just accepting other peoples’.”

That brings us back to Hong Kong.

China is not going to cede control of Hong Kong because it doesn’t have to. It will send its security agents over the border to abduct perceived dissidents and troublemakers, like the Hong Kong booksellers, because it can, and Hong Kong is sovereign Chinese territory. The National People’s Congress will step in and interpret Hong Kong’s Basic Law any time it feels it needs to, without waiting for the city’s local courts to render judgement. China will not allow universal suffrage and free elections unless it is certain it can control the outcome. China will not allow Hong Kong to become a source of political instability that could affect the mainland.

If China adopted a more benign, hands off approach to Hong Kong in the early days, it was for fear of causing any immediate disruption, which might have sparked an exodus or panicked financial markets.  But for China’s leaders, the “one country” part of that formula was always more important than the “two systems.”  China made that clear in its 2014 “white paper” that said the central government in Beijing has “comprehensive jurisdiction” over the territory.  Hong Kong may have “a high degree of autonomy,” but the white paper defined that as “the power to run local affairs as authorized by the central leadership.”

And rather than Hong Kong taking over the mainland, as some predicted, what we have seen is the increasing Mainlandization of Hong Kong. Mandarin is fast becoming a dominant language, in some cases supplanting English. The influx of mainlanders working, studying and visiting here has dramatically changed the city’s complexion. And that Mainlandization includes Chinese businesses and the central government buying up media properties, most recently the Alibaba Group purchasing The South China Morning Post. China’s Central Liaison Office now reportedly controls about 80 percent of the book publishing industry in Hong Kong.

The Occupy protests of 2014 showed that a generation of young people wants more political rights. The success of “localist” candidates in last year’s legislative elections showed many people are unafraid of antagonizing Beijing.  But it is really all for naught.

On March 26, Carrie Lam, the former chief secretary, was chosen by 777 members of a select group of 1,194 elite to be Hong Kong’s new chief executive.  She defeated John Tsang, the more popular former finance chief.  Tsang topped more than 50 percent in public opinion polls, some 20 points ahead of Lam. He ran an impressive campaign, featuring large public rallies and posters plastered in subways showing him surrounded by smiling fans taking selfies. Tsang also had the support of the pro-democracy bloc.

But who becomes chief executive here is not decided by polls or popularity or 7.3 million people. That decision is made in Beijing, and China’s rulers let it be known early on that their choice was Lam.  The rest was all theatre.

The dynamic was best summed up by Li Ka-shing, Hong Kong’s wealthiest tycoon, when he came out expressing support for Lam, without naming her. “Popularity certainly is important,” Li said, “but maintaining a good working relationship with the central government is also crucial.”

After 150 years as a British colony, followed by two decades as a “special administrative region” of Communist China, Hong Kong people’s desire to be able to choose their own leaders and truly govern themselves remains illusory. Major decisions about Hong Kong will continue to be made in Beijing, China will continue to meddle in local affairs when it sees fit, and the Mainlandization will go on unabated. Hong Kong will not see full democracy until China itself changes, and that is not likely to happen even in the next 20 years. To acknowledge that does not make one pro-China or a panda hugger or even a pessimist.  It is simply a recognition of the reality, and everyone needs to get used to it.