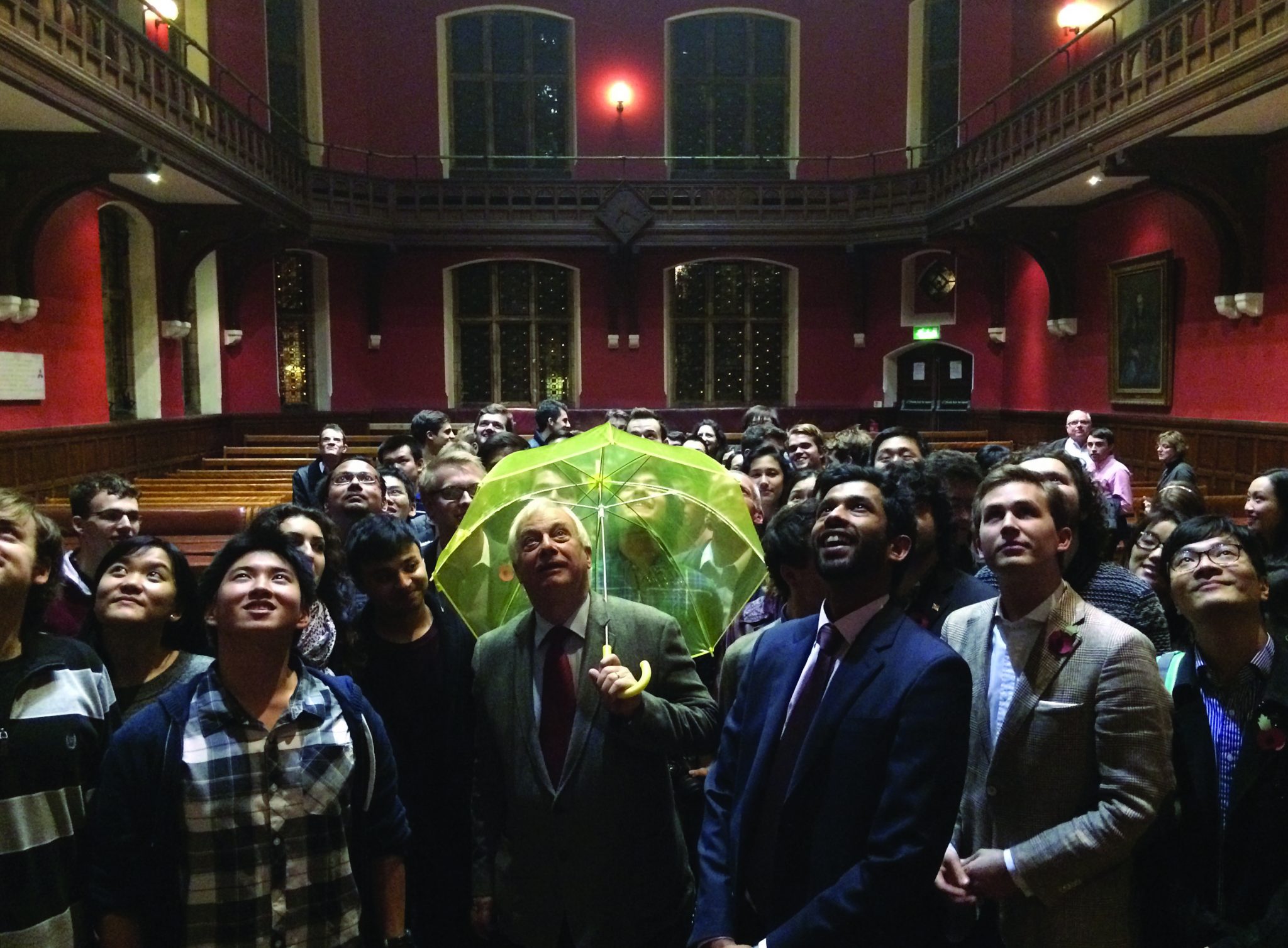 Chris Patten on Hong Kong’s fight for democracy, and his latest memoir

Chris Patten returned to Hong Kong and the FCC to promote his new book and to share his views on democracy in Hong Kong. 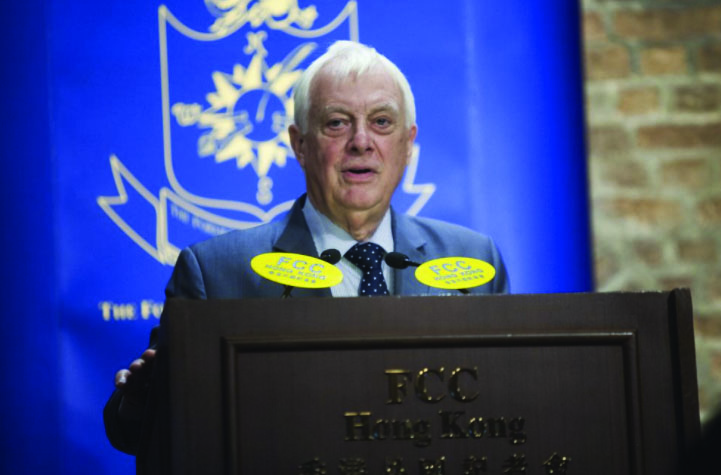 Chris Patten, who first came to the FCC as a young MP in 1979, then in the early 90s as the last governor, and for three other book launches, was in town to promote his latest book which coincided with the aftermath of the jailing of Joshua Wong and the latest chapter of Hong Kong’s pro-independence tussle.

Patten’s book, “First Confession: A Sort of Memoir”, explores identity politics and the nature of community through the story of his own complicated identity through various political roles in the UK, Ireland, Europe and of course Hong Kong, which is going through the latest version of its own identity crisis. 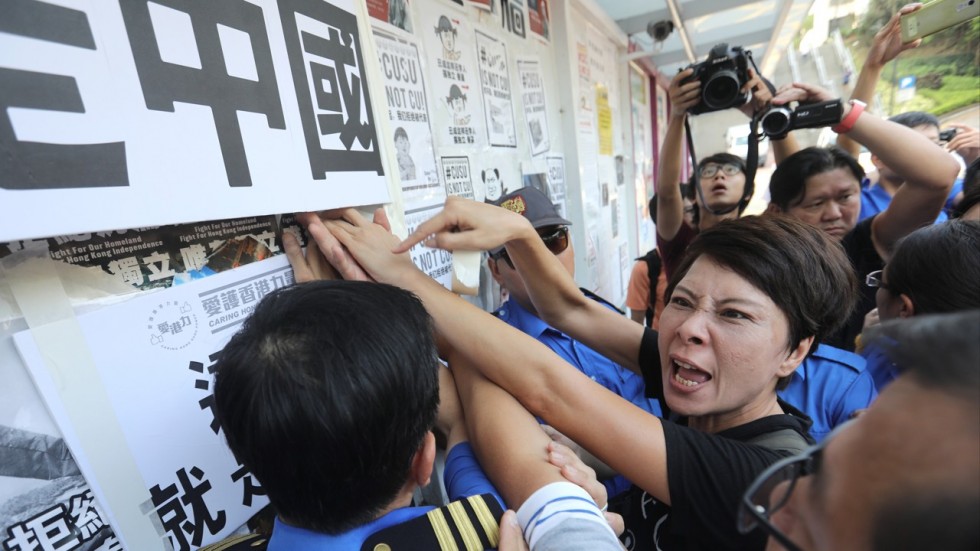 Students clash in front of a wall of posters for and against independence for Hong Kong. Photo: SCMP

Patten, who is Chancellor of Oxford and who when he was governor was a chancellor of all Hong Kong universities, arrived in Hong Kong just days after a university row saw pro-independence students clash with their peers from the Mainland over posters advocating independence for Hong Kong. These were put up at the Chinese University campus, heightening simmering tensions in the city.

While Patten reiterated his view that the pro-independence movement dilutes the city’s drive for more democracy, he also said that both sides need to keep talking.

“What I hope is that people will start talking to one another again. I hope there’ll be a dialogue. You can’t simply expect people to accept your values or standards or political judgements without talking to them about it. You can’t trample ideas into the dust. You have to talk to people and listen to people,” he said.

Patten said he hoped Hong Kong – “a city which I love as much as anywhere in the world” – would continue to thrive.

When asked what he would do if he were the UK’s leader, Patten said: “First of all I’d be pleased that the last six-monthly report by the Foreign Office was a bit more honest and outspoken than some reports had been in the past. Secondly, I would begin from the assumption that we shouldn’t believe that you can only do business with China over Hong Kong or over anything else from a position of supine deference.

“I would come to Hong Kong, I would make a speech saying that I thought Hong Kong was fantastic, that I thought it was a jewel in the crown for China potentially as we go forward; that it represented in the 21st century an issue which is going to be dominant – that is how you balance economic and political freedom and what sort of role China has in the world today, what sort of role it’s prepared to take in global governance, how it’s prepared to make more of the footprint that it should have because of its economic strength and power.

“And I would hope to go on to China and say similar things.”

He added that he would also raise the issue of Liu Xiaobo’s wife. Liu Xia, who has been under house arrest since her husband, a prominent dissident since the 1989 Tiananmen Square pro-democracy protests, won the Nobel prize in 2010.  She was last seen in a video recorded in August and posted on social media in which she asks for time to grieve. Many of her supporters and friends, however, have expressed concern for her welfare.

Justice Secretary Rimsky Yuen also came in for criticism from Patten as he was asked for his thoughts on the upcoming trials of nine pro-democracy activists involved in Occupy Central. Patten said he was “loathe to comment on ongoing legal processes in Hong Kong”, and instead chose to speak specifically about Joshua Wong, Alex Chow and Nathan Law – jailed in August for their part in the 2014 protests.

He criticised the Justice Secretary’s decision to appeal their original non-custodial sentences, saying it was politically motivated. “He’s [a] grown-up. He must know, as I said earlier, that actions have consequences, and not to understand what signal that would send to the rest of the world, strikes me as being, to be frank, a little naive,” he said.

Referring to a Reuters report that Yuen had insisted on reviewing the sentences despite opposition from fellow prosecutors, Patten added: “Perhaps it would have been wise to take the advice which we were told he was receiving from someone in his department.”

The politics of identity

Chris Patten’s latest book, First Confession: A Sort of Memoir, looks at the concept of identity politics and the nature of community. Rather than write a another conceptual book on the subject, he chose to explore the issues through the story of his own rather complicated identity. In his lunch address he gave a potted version of his “obsession” with identity.

“I am from a family of Irish potato famine immigrants, lower middle class, scholarship boy and a Catholic. I was not only the first of my family to go to university, but also the first Catholic to become Chancellor of Oxford since 1560 — we’ve waited a long time…

“I am also an endangered species, a moderate Conservative who found myself in jobs where identity politics was the central issue.

“I spent two years as a government minister in Northern Ireland and went back later to reorganise the police service as part of the Belfast Agreement (1998) which bought peace to the province. I was dealing with a problem that was purported to be about religion, but was in fact about power.”

Later as a European Commissioner Patten spent time dealing with the alleged politics of ethnicity between Croats, Serbs and Muslims.

“When I found myself in Hong Kong I was dealing with another aspect of identity politics, the so-called clash of civilisations. A much-advocated concept by Singapore’s Lee Kuan Yew. “When I was coming to Hong Kong I was advised to stop off in Singapore to talk to the then Prime Minister Lee, who said to me that first ‘you have to behave like a newly elected prime minister, you have got to have a programme, be clear what it is and stick to it. And secondly, you have to deal with the Joint Declaration and the Basic Law, which you can’t change but you want to fill in all the gaps and make the whole thing as democratic as possible”.

“So I came here and thought I did both things.”

I also had difficulty with the idea of cultural clash or civilisation clash and thought that people in Hong Kong wanted to be in control of their own lives as much as any other people around the world.

Anyway Lee — “who once sent a letter to me asking if we could be on ‘Harry’ and ‘Chris’ terms” — came to Hong Kong and said how much he disagreed with Patten about everything. Lee, of course, chose the most embarrassing moment to say this when he gave a lecture at HKU presided over by Patten in his role as the university’s Chancellor. In response to a question of whether Hong Kong deserved to be a democracy, he replied that it didn’t matter whether Hong Kong deserved a democracy because it wasn’t going to get it as Hong Kong is part of Asia and people in Asia did not care about human rights and civil liberties because they were Confucian.

“I had some difficulty with that argument as I always thought that human rights were universal,” Patten said. “I also had trouble with the idea that there was a political model which would comprehend everyone from Pyongyang to New Delhi. And I also had a problem with the notion that everyone in Chinese societies were Confucian.

“I also had difficulty with the idea of cultural clash or civilisation clash and thought that people in Hong Kong wanted to be in control of their own lives as much as any other people around the world.”

So now after all those experiences, Patten  said he is now witnessing the latest manifestations of identity politics with some concern: The first is Jihadist terrorism, “which we live with week by week in European cities, which I do not think has anything to do with the Koran or Islam”; secondly the growing ethno-nationalism, where individual countries seem to think that communities can only be defined by their nationality — a nationalism that defines itself as against others, which so often sentimentalises its own history, glamourises its institutions and xenophobia is given full rein.

“If you look at what’s been happening in Europe, or America’s drive to be great again — if it wasn’t already, or you look at some parts of Asia and closer to home here, all this represents something I thought we all learned about after the Second World War: namely individual countries cannot deal with their own problems without dealing with other countries and sharing or pooling sovereignty — which I think is extremely important lesson we must relearn.”