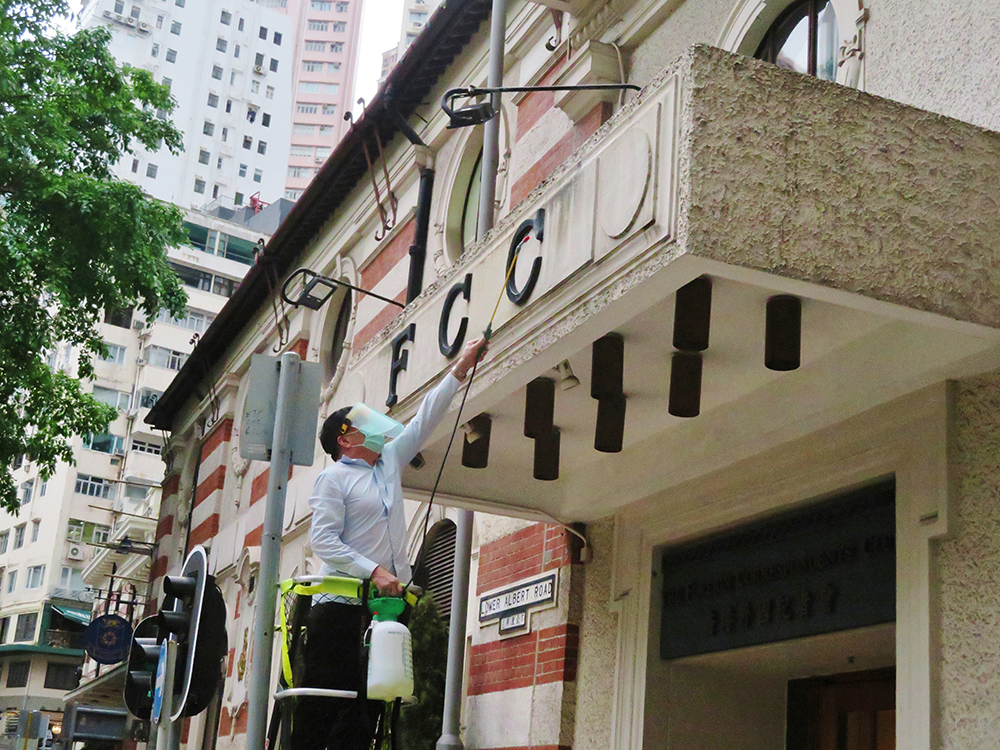 The FCC closed for two days last month for a “deep cleaning” after a member was confirmed with COVID-19. Swift action by the general manager and the Board’s “SWAT” team and a phenomenal effort by all the amazing staff meant that our Club managed to get ahead of the virus. Kate Whitehead reports. 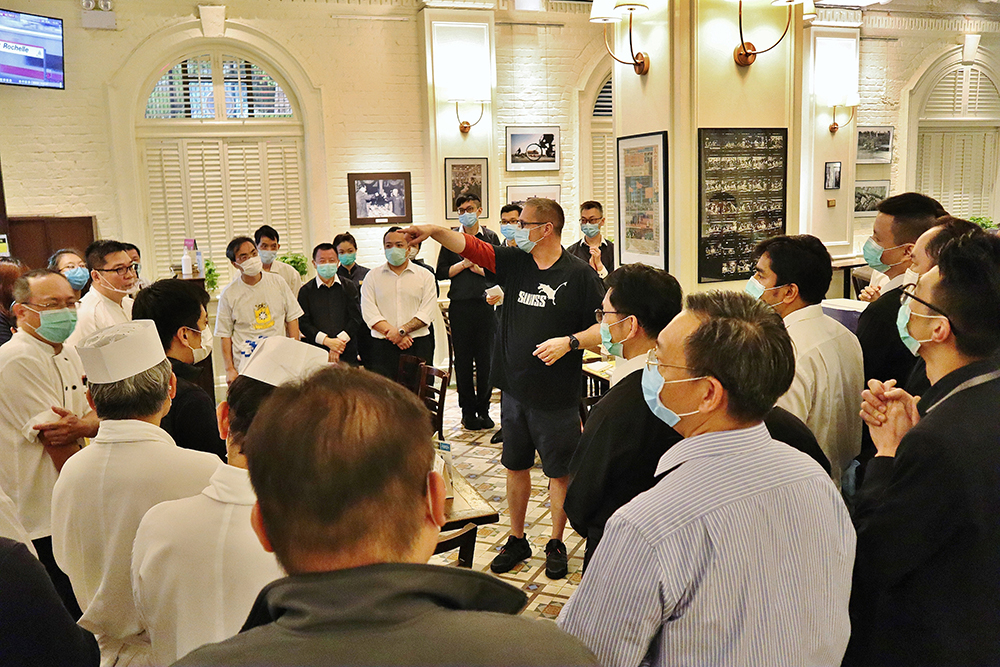 First up, let’s get one thing straight – the response was a matter of acting with what the Board referred to as “an abundance of caution”. On the morning of Tuesday March 10, sharp-eyed Carman Chung, who oversees Membership, noticed that a person hospitalised with the virus was a Club member. Electronic records showed that the member, who was quarantined on March 5 after a close family member tested positive for the virus, had last been in the Club 19 days before.

The risk posed to members and staff was very low, but these are days for being over-cautious and the decision was made to close the Club for the next two days for a top-to-bottom thorough cleaning. 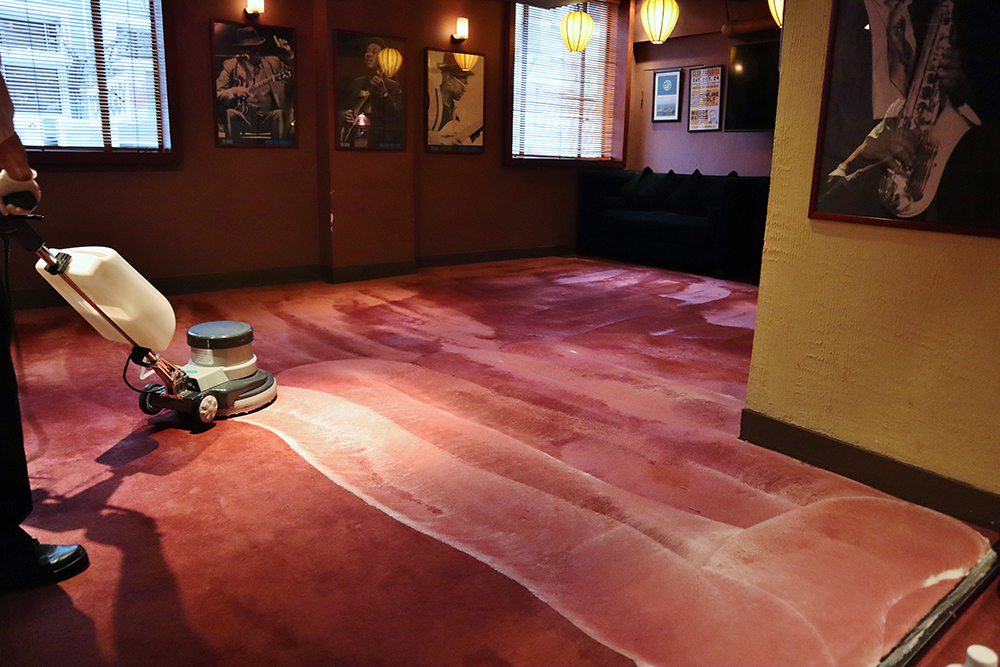 Didier Saugy has proven himself to be a hands-on, roll-up-his-shirt-sleeves team player of a general manager and this time was no exception. The Club closed at 6pm that Tuesday evening – the very day the connection with the hospitalised member was made – and Didier briefed staff about the two-day plan to thoroughly cleanse the property. Anyone who felt uncomfortable was offered the chance to opt out. No one did – all staff were committed to the mission.

I snuck in on day two of “Operation Deep Cleanse”. The club was a hive of activity – 83 staff all in casual clothes and wearing masks were industriously scrubbing, cleaning and mopping. The vibe was upbeat – Didier’s enthusiasm had turned this possibly less than desirable job into a grand team-building exercise. 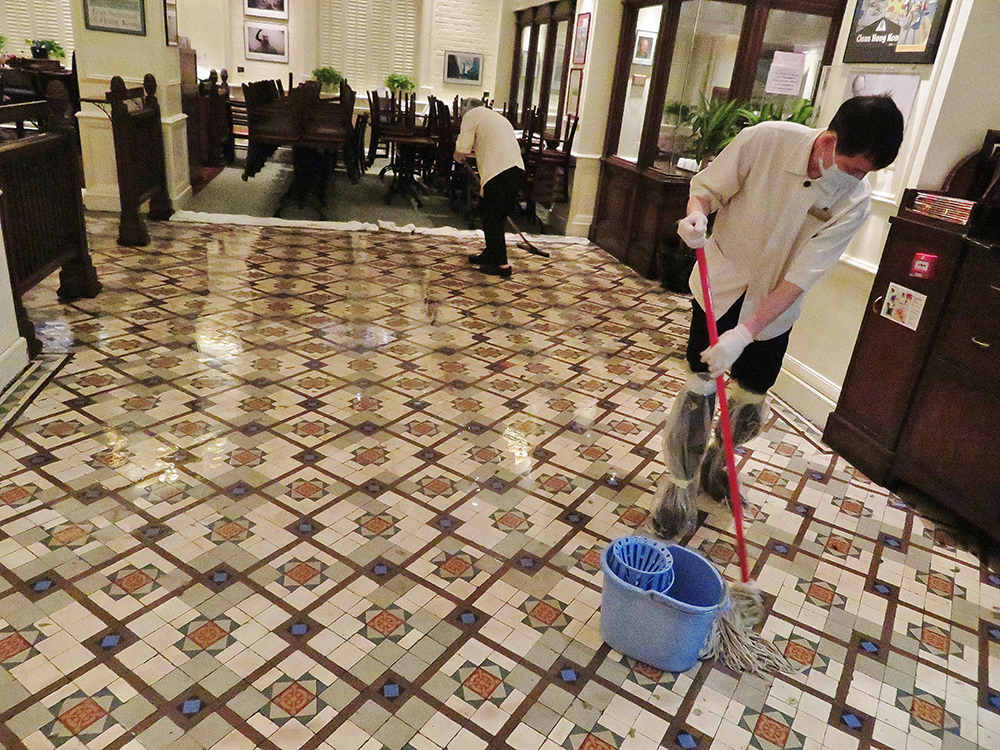 So, what exactly is involved in a “deep cleaning”? It is different from regular or spring cleaning because it reaches the deep grime and dirt and covers areas which aren’t covered in standard cleaning operations. It began with the entrance – two staff on ladders scrubbed the Club’s façade and the grime between lettering on the FCC signage – and extended to every nook and cranny inside the Club.

All the furniture was moved, the tiled floor in the main dining room was washed with a high-pressure water jet, and all the carpets were cleaned with special carpet sanitizer. Three staff spent a whole day scrubbing the 82 chairs in the dining room. All the kitchen equipment was moved and every square inch scrubbed spotless. In the wine cellar, all the bottles were shifted, polished and replaced. In the workroom, old magazines were boxed up and put in storage and the place given a good going over.

A pest control team was brought in overnight, targeting the kitchen and dumb waiters. The air-conditioners were given a professional overhaul. A UV light sanitizer was used in the staff uniform room and the gym changing rooms to disinfect the spaces. Didier even bought magnetic window cleaners to reach the stubborn patches of mildew on the Verandah windows. The Club’s new full-time handyman is a master painter and has been repainting some of the rooms, beginning with the Burton Room.

“Operation Deep Cleanse” is testament to the fact that good things can come out of adversity – the Club has never been as clean. And thanks to Didier the two-day venture brought the staff even closer together.

“Everyone has been very energetic and supportive. If they didn’t have their masks on you would see they are smiling,” said Didier. 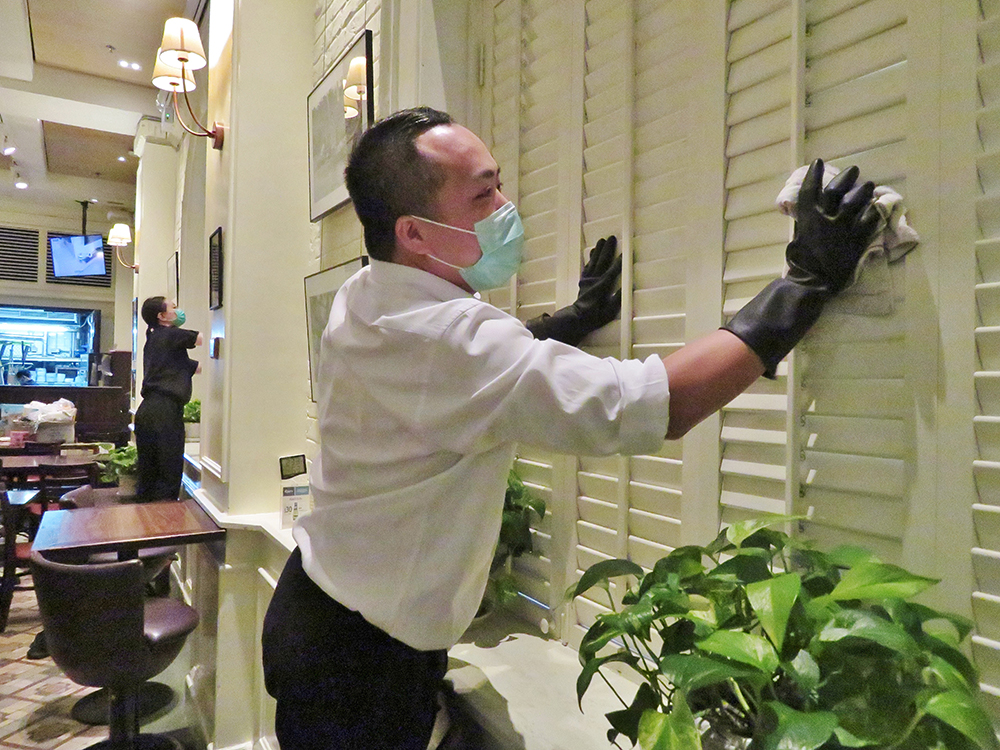 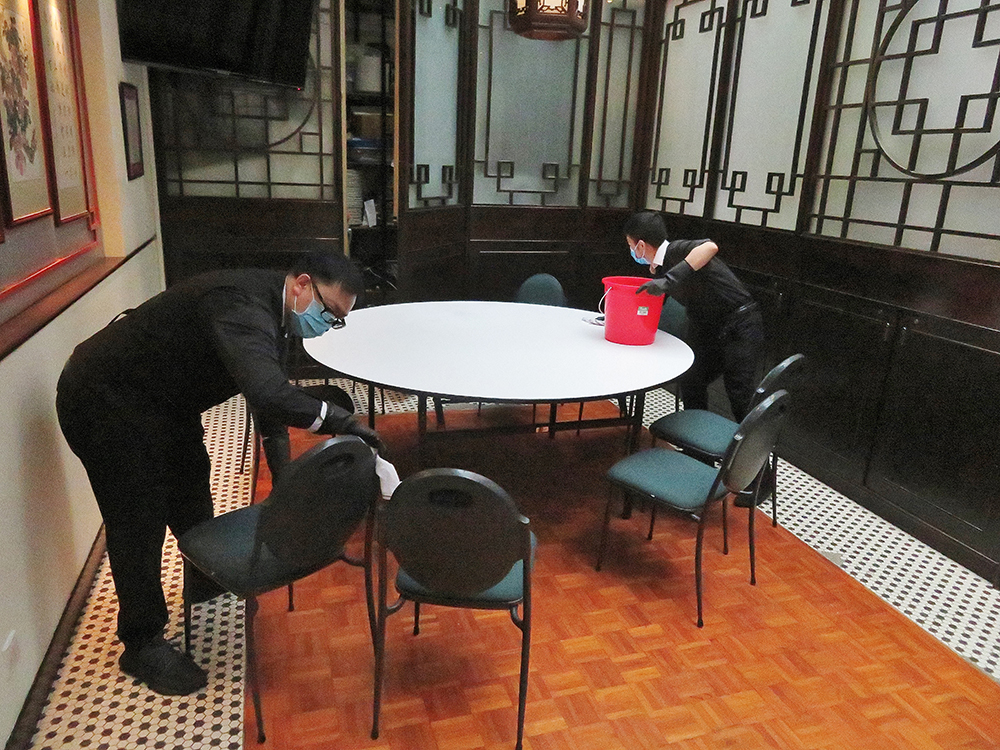 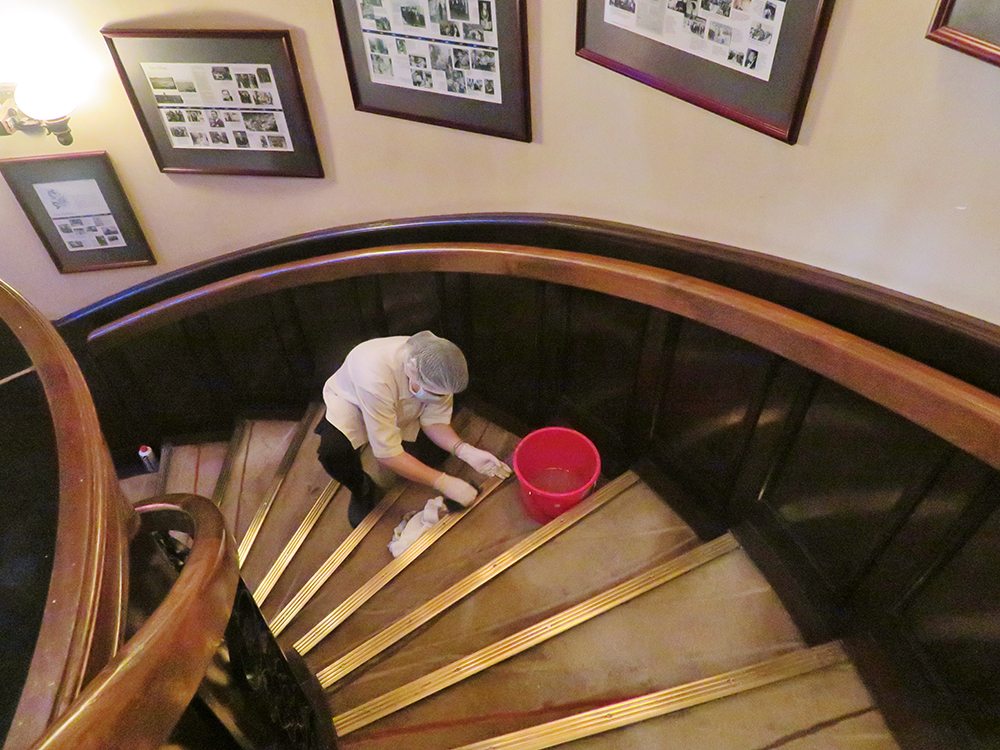 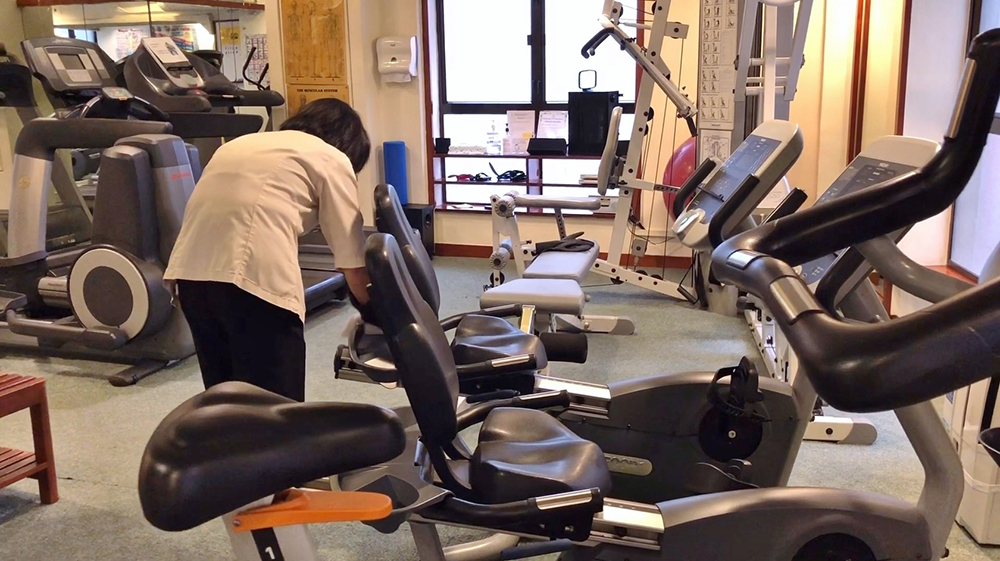