News The Correspondent Dying in the pursuit of news 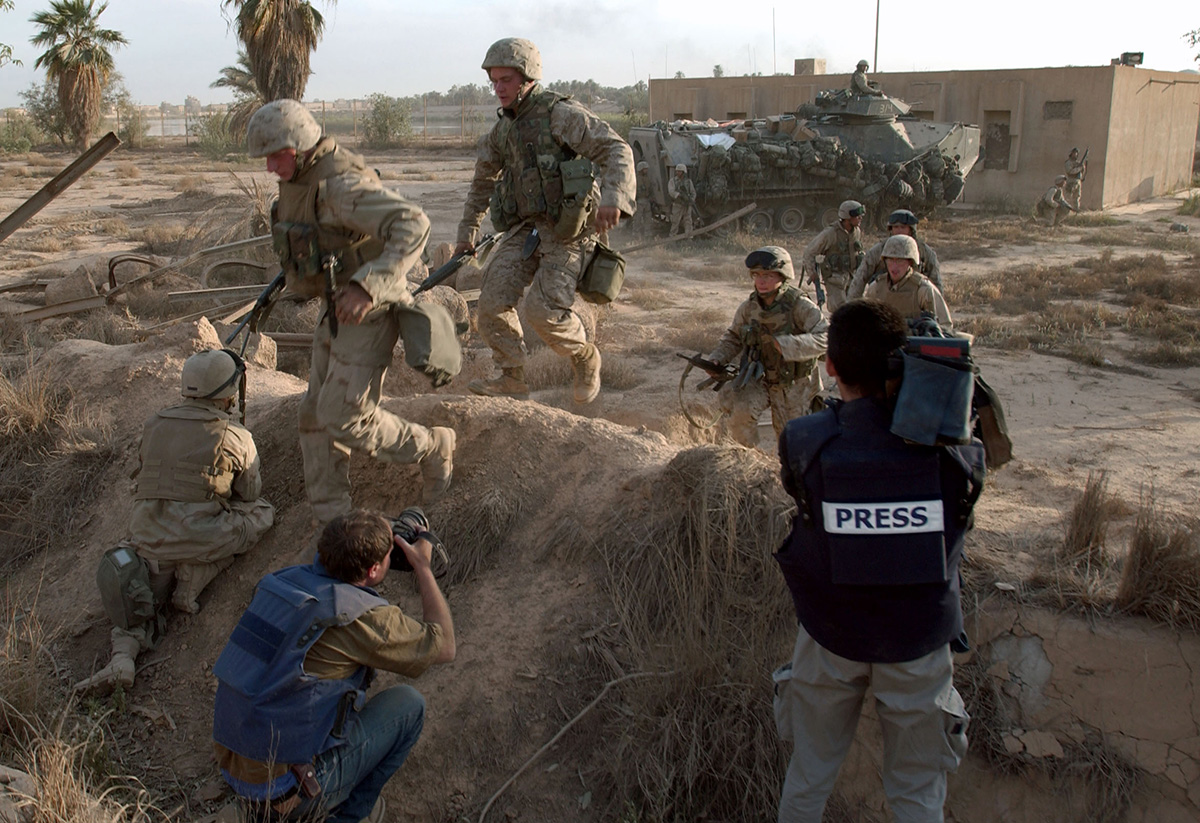 Dying in the pursuit of news

Journalists as targets in conflict zones is a relatively new thing as militias and some governments around the world seek to control the message by killing the messenger. The FCC’s Journalism Conference heard from those who have been there.

The FCC’s Roll of Honour lists those killed in Indochina and Korea while on the job: a case of wrong place, wrong time. However, a new name was added in 2014, Sky News cameraman and former member Mick Deane. In late 2013 he was filming in the Rabaa al-Adawiya protest camp in Egypt when he was shot and killed by a sniper.

“In the old days, a press card was like a protection, but now more and more journalists have been targeted and killed,” said Eric Wishart, a member of AFP’s global news management, who led a panel discussion on the increasingly dangerous world for journalists.

“The game and the stakes have changed tremendously,” according to Marc Lavine, AFP’s editor-in-chief for Asia. ”In the mid-90s when I went to Afghanistan as a war correspondent, I had very little training and was equipped with just a pen and notebook.

“There was always the danger of being hurt or killed if you happened to be in the wrong place at the wrong time, but you were not targeted so you weren’t always looking over your shoulder expecting to have someone come out at you.”

In the past 15 years we have seen a complete move away from that, with militants targeting journalists in a propaganda game. “Film of executions in Syria illustrate that incredibly well as killing a journalist stops the message and sends its own brutal message across the world,” he said.

“In Pakistan we saw protesting journalists attacked by police with live rounds and baton charges. While, closer to home journalists were targeted in the Mongkok riots earlier this year.”

The figures speak for themselves: the Committee to Protect Journalists said that 970 journalists have been killed in the past 20 years – two-thirds in the past 10 years alone. Of the 72 killed last year, two-thirds of them were targeted.

“One of my big fears is the kidnapping of journalists,” said Roger Clark, CNN’s vice-president for Asia and Hong Kong bureau chief. “If ISIS kidnapped a Western journalist from a big news organisation it would use that to maximum effect across social media – that scares the hell out of me.”

Always in the past journalists would identify themselves as journalists – not such a good idea
these days.

For AFP, Lavine said, “we have taken identification from our cars and some of our offices, although we mostly still have PRESS tags on our flak jackets. However, in some sensitive areas it’s more a liability than a protection.”

For Roger Clark there are some situations “where you do want to be identified as PRESS on your car, or on your flak jacket, but for other situations like when we recently sent one of our correspondents to Syria where she kept the lowest of the low profile and tried to blend in.

“When you talk to our security specialists the phrase they use all the time is ‘blend in’, which, thankfully, is easier these days with the cameras being very small. Unlike when we were in Iraq where we had to keep a low profile by using old cars to get around – we were constantly re-spraying them.”

CNN’s senior international correspondent Ivan Watson says the precautions journalists should take depend on the conflict. “If you are dealing with conventional armies then you do identify yourself as the military usually represents the government, and has a chain of command and responsibility.

“But when you are dealing with militias it’s all about blending in,” he said. “During the US occupation of Iraq we used to hide in the back of crappy old taxis – basically our best defence at that point.

“It is a very strange development that we think that the violence against journalists – most of it directed against local journalists – has grown even though the number of cellphones and distribution systems for pictures and information now in use has magnified.

“It kills me that some governments will go after me and my professional TV crew, yet all those people running around with cellphones taking pictures – and uploading them to Facebook – don’t appear to be targeted.”

Clark spoke about recent threats to major news organisations by the Taliban in Afghanistan for not properly presenting the Taliban’s views. “However, the people who take the brunt of these threats are not the guys who parachute in for a story, it’s the guys who have to stay behind in those worlds – and very often the least protected.” 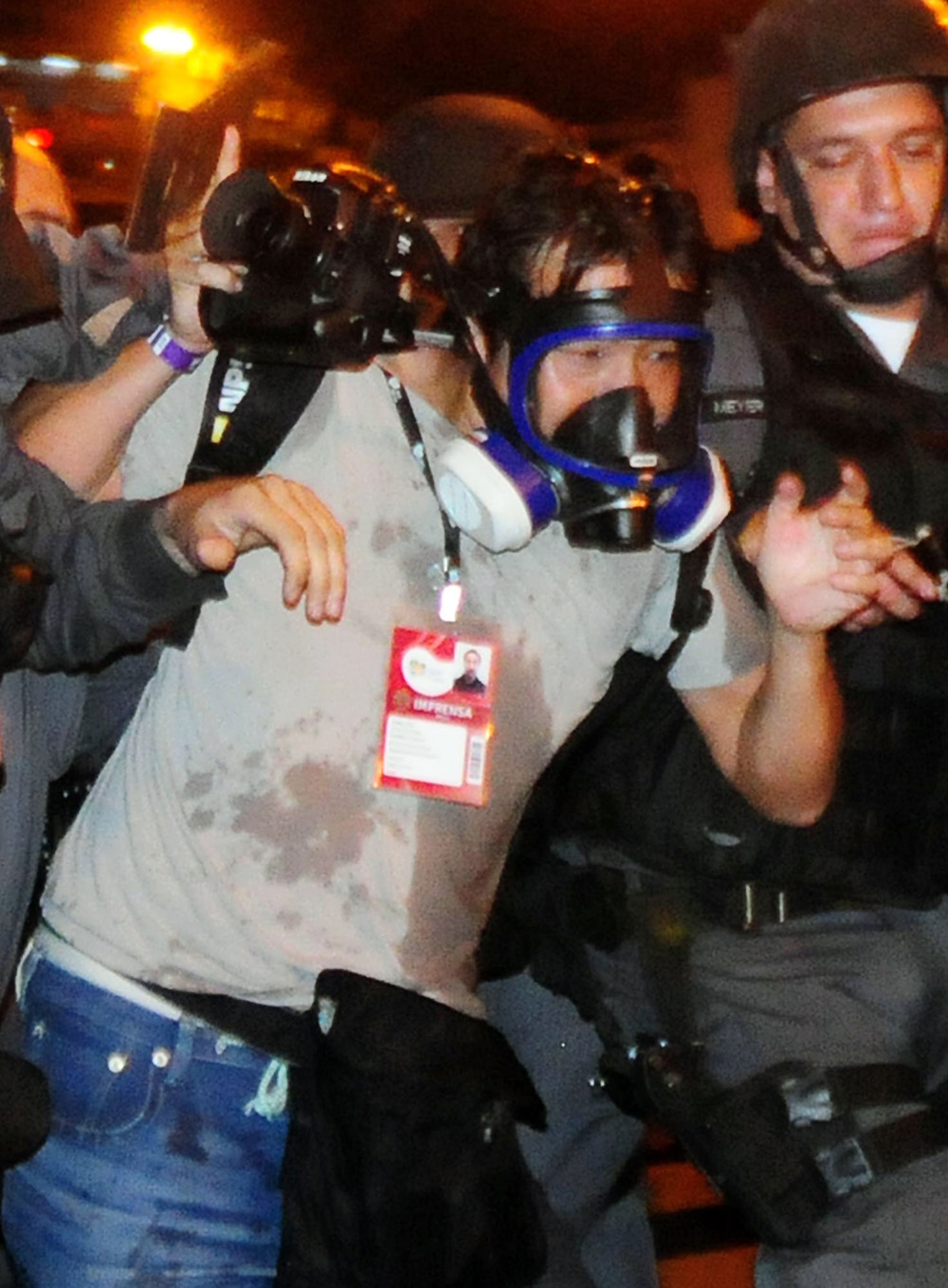 The CNN team led by Andrew Stevens was on Tacloban in the Philippines and faced the full force of Typhoon Haiyan in November 2013 as it devastated the island. Dramatic – and award-winning – footage was shown of the typhoon which killed more than 10,000 people.

“They were there before the storm hit,” Clark said. “With our good contacts in the country we got our reporters there very quickly.”

At the time Clark was director of international coverage in Atlanta and, like they always do with big stories, sat down and did a review.

“We knew we had let the front-line team down badly because we could not supply them with the support they needed,” he said. “Normally we pride ourselves in making sure our correspondents and producers can eat, sleep in reasonable conditions and drink clean water. Now, we had supplies but they were stuck on another island.”

Out of this experience CNN now has a different deployment procedure. “When we deploy – whether on disaster or high-security stories – someone has to hit the pause button and take stock.”

CNN has now put together what they call “grab bags” that are in every bureau designed to support a team of three for three to four days – everything from toothpaste to tampons, including first aid kits, tents, sleeping bags, floor liners, mosquito nets, water-purification tablets, matches, sun cream, walkie-talkies, satellite phones, batteries and even instant noodles.

“It’s a great asset and you don’t have to think about logistics as you race off to do a story,” Clark said. “You also need to ensure that your team is not bigger than the resources you have.”

Sometimes what they need to bring doesn’t fit into the grab bag. “Sometimes we need to bring a generator – and find fuel – to a disaster zone as part of the philosophy that we have to create all our own infrastructure to operate,” Watson said. “It means you don’t have a cameraman falling down from dehydration because he is carrying heavy equipment around.”

Having sufficient cash is another issue. “Keep in mind that ATMs often don’t work in disasters,” he said. “We have had to bail out other journalists many times.

“It’s all in the preparation: you may need body armour, gas masks or long underwear, but it’s the grab-bag idea that ensures survival.”

Watson, reflecting on his experiences in Afghanistan and Iraq, said it’s absolutely essential to do specific hostile environment training. “And it’s not for just surviving war, conflict or disaster, you need to able to know how to begin surviving when the whole structure of the society has been ripped apart.”

Marc Lavine’s advice to Hong Kong-based journalists thinking of diving into the next riot: don’t rush in when you don’t know the score.“All it takes is a big rock hitting your head, or finding yourself between the police and the rioters.”

“We are always trying to get to the scene to see what’s happening,” says Ivan Watson, “but at some point you have to assess what’s going on around you – the worst place you can be is between two groups shaping up for a fight.”

He suggests that you need to try and figure out which side you are safe on… “or the side with the better guns”.

“It’s also important to remember that the riot or conflict always evolves or degenerates during the course of the conflict. When I first started going into Syria from Turkey the government didn’t welcome us and we would need to hide among the rebels. However, in the course of a year, the rebels started kidnapping journalists so they became a bigger threat. We finished up going in with the same military which had horrified us before.”

Roger Clark says it is down to training. “We need to be trained well enough to know just what our limits are before it is too late to turn back.”

Lavine agrees and adds that “we need to look at the kind of training we are delivering to journalists these days.

“Some 10 to 15 years ago in the time of Afghanistan and Iraq, war-type training was needed,” he said. “Often these days it’s training around public order – riots and the like. The chances of you getting killed in a riot in Hong Kong or wherever is fairly small, but with the huge amount of stones and bottles flying around, serious injuries are likely.”

While body armour is useful, it appears reinforced glasses and hard hats are more the thing for riots.

“When you are in a country that is going through destructive changes or conflict, you need exceptional planning for your teams – with the expectation that nothing works according to plan,” Watson said.

A dramatic video was shown of an incident in Iraq in 2014 when Watson joined an Iraq air force relief helicopter to take aid to a religious group besieged on the top of a mountain by ISIS forces. In the end the helicopter crew had to fire machine guns to protect the craft coming and going. Besides dropping relief goods, they also picked as many terrified people people as they could. Inevitably families were split up with the ensuing emotional chaos.

Watson said “there was little advance warning of what we were getting into”.

“This sort of stuff isn’t a game and it messes you up for a while. After some of these types of incidents I have gone into counselling – it’s essential to do this and playing at being a tough guy is not on.”

Trauma and PTSD can also occur well away from the field. Clark said that on the CNN international desk they have Arabic speakers vetting all this horrific footage pouring in relentlessly from the Middle East – sometimes the footage is worse than what you see in the field.

“So as managers we have to keep a close eye on these people,” he said. “At CNN we are pretty good in making sure that people know what to do if they are struggling to cope. It is only in recent times that it has been recognised that PTSD affects journalists in the field and back in the newsroom.”