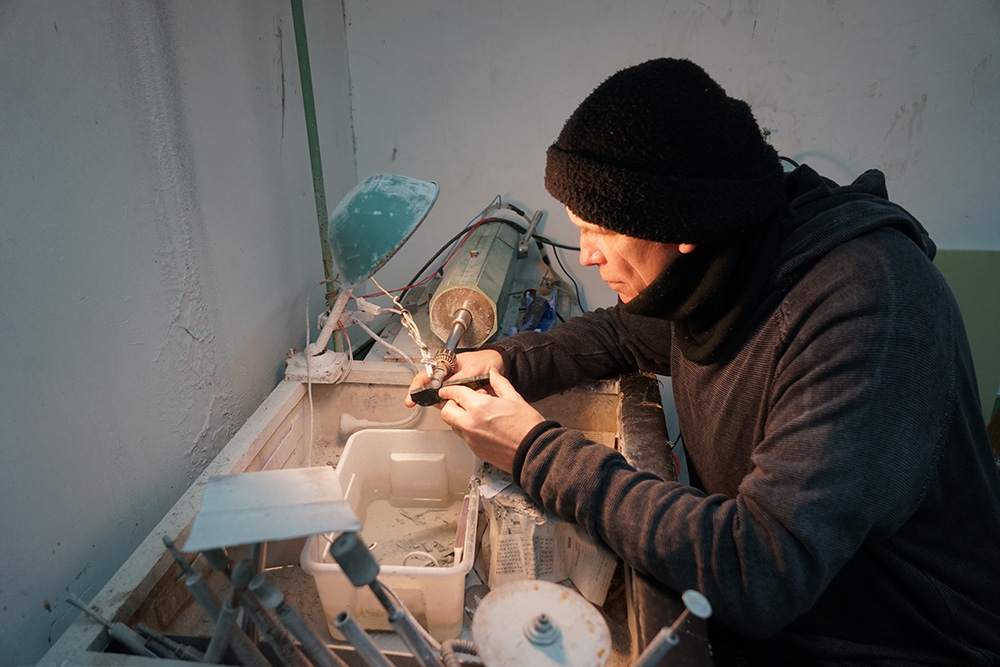 Former BBC reporter Andrew Shaw is proof that there is life after journalism, even if it took extreme changes for him to achieve it. Kate Whitehead tells his unusual story.

Master jade carver Andrew Shaw in his workshop in Suzhou

Plenty of hardened hacks fantasise at some point or other about getting out of journalism. For veteran BBC reporter Andrew Shaw that urge had been gnawing at him for some years before he made the leap. The Londoner had no interest in taking the well-trodden route to the dark side, PR, and his transition was such a radical shift it took everyone by surprise.

The seed for change was planted in 2002, when Shaw took a four-month sabbatical from a job he no longer enjoyed and much-needed time out from caring for his mother who was seriously ill.

“I was fed up with journalism, I’d got everything I wanted to out of it, I’d done everything I needed to do, I was just repeating myself, it was time to do something else,” says Shaw.

For four carefree months he lived in Thailand in a hut on the beach, did yoga, went to a Buddhist retreat and laughed at the sheer joy of being alive – and not at work. On the last day of his trip, while visiting Wat Doi Suthep, the temple overlooking the northern city of Chiang Mai, he stumbled into a small jade shop. A beautiful lavender jade Buddha caught his eye.

“As soon as I touched it, it just sang to me, such a beautiful stone, I fell in love with jade at that moment,” says Shaw.

From there it was back to the grindstone at the BBC and his filial obligations, but his holiday romance with jade didn’t fade, it became a fully-fledged obsession. Every time he was sent on assignment overseas, he went looking for jade. In Hong Kong, he spent three days haggling over a piece. In 2006, his mother died when he was in Vietnam covering the trial of disgraced British pop star Gary Glitter. He knew it was time to do something else.

“I put my affairs in order and the next year got a plane to China, and went to Suzhou, where I heard there was a jade carving centre, and started looking for someone to teach me to carve jade,” says Shaw.

It was a bold move. It was 2008, the year of the Beijing Olympics, and it took some sweet talking to explain to immigration why a former BBC reporter suddenly wanted to live in Suzhou. What’s more, the then 51-year-old didn’t speak a word of Chinese. But he was determined. He enrolled in a Chinese class at the local university and then set about trying to find his way into the carving industry.

“The words to ‘carve jade’ and ‘go fishing’ are very similar, so quite often people would say, ‘Oh, you like to go fishing’. Even when I showed them a piece of jade, they’d say, ‘So where do you go fishing?’” says Shaw.

After seven months he had a basic grasp of the language and found the city’s network of jade carving alleys where thousands of jade carvers worked in small workshops.

“I went from workshop to workshop for six months asking people whether they’d teach me to carve jade. People don’t like to say no, they drink tea with you. Most jade carvers retire at 50 and I was already over 50,” says Shaw.

Eventually, he found a man who agreed to let him use a spindle and gave him old pieces of jade to carve and Shaw went there every afternoon for two years. Then he set up his own workshop and sold his pieces in the local market.

All the hard work paid off in 2016, when he won a medal in the Zi Gang Bey Jade Carving Competition in Suzhou. The following year, he invited international carvers to enter and it’s now the world’s only international jade carving competition. When he proposed to his wife, Ann, who he met in Suzhou, he gave her a flawless piece of white jade.

“A flawless piece of white jade is difficult to get hold of and cost a lot. She’s never taken it off since I gave it to her,” says Shaw.

Today the couple runs Ann’s English Tea House and Restaurant, a cafe with jade gallery attached, beside Jinji Lake. Although Shaw has turned his back on journalism, he hasn’t stopped writing and this year released Jade Life: An
Englishman’s Love Affair with China’s National Treasure, published by Earnshaw Books.

“It’s about the Chinese jade industry as told from the perspective of a Western jade carver. The book has a journalistic rigour to it, with plenty of interviews, and I’ve fact-checked all the sources,” says Shaw, the only foreign master jade carver in China. n