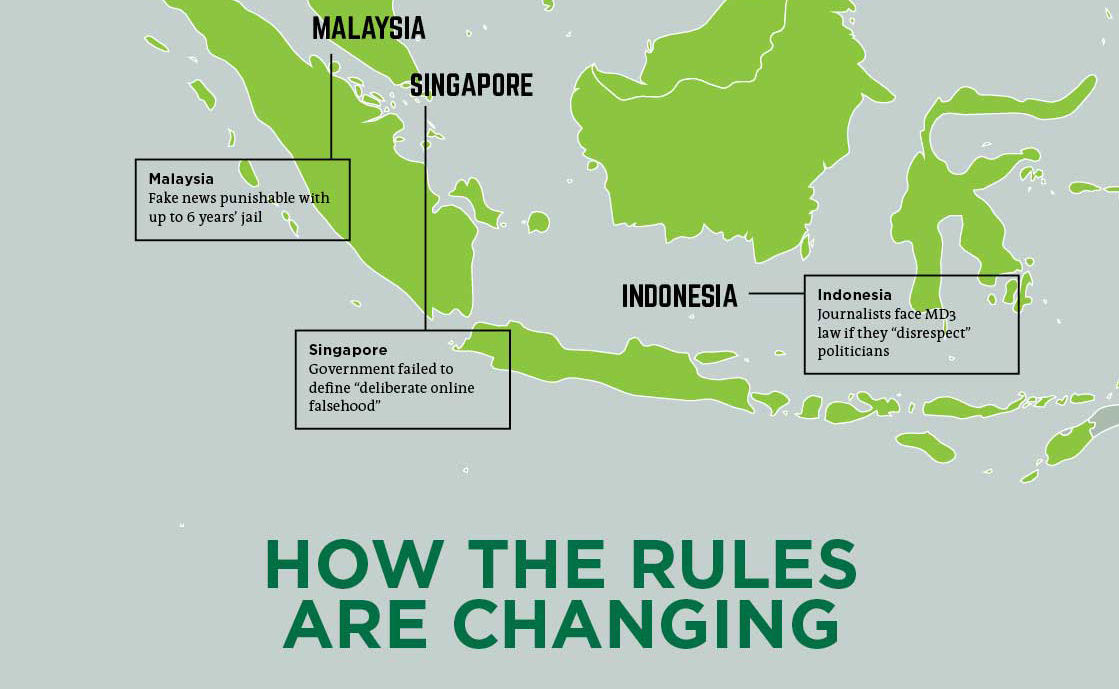 Governments in Asia are increasingly turning to the law to stifle bothersome journalists. New laws that critics decry as impeding free speech are making their way to the statute books in record time. Prosecutors in the region meanwhile are flexing their legal muscle in more innovative ways. 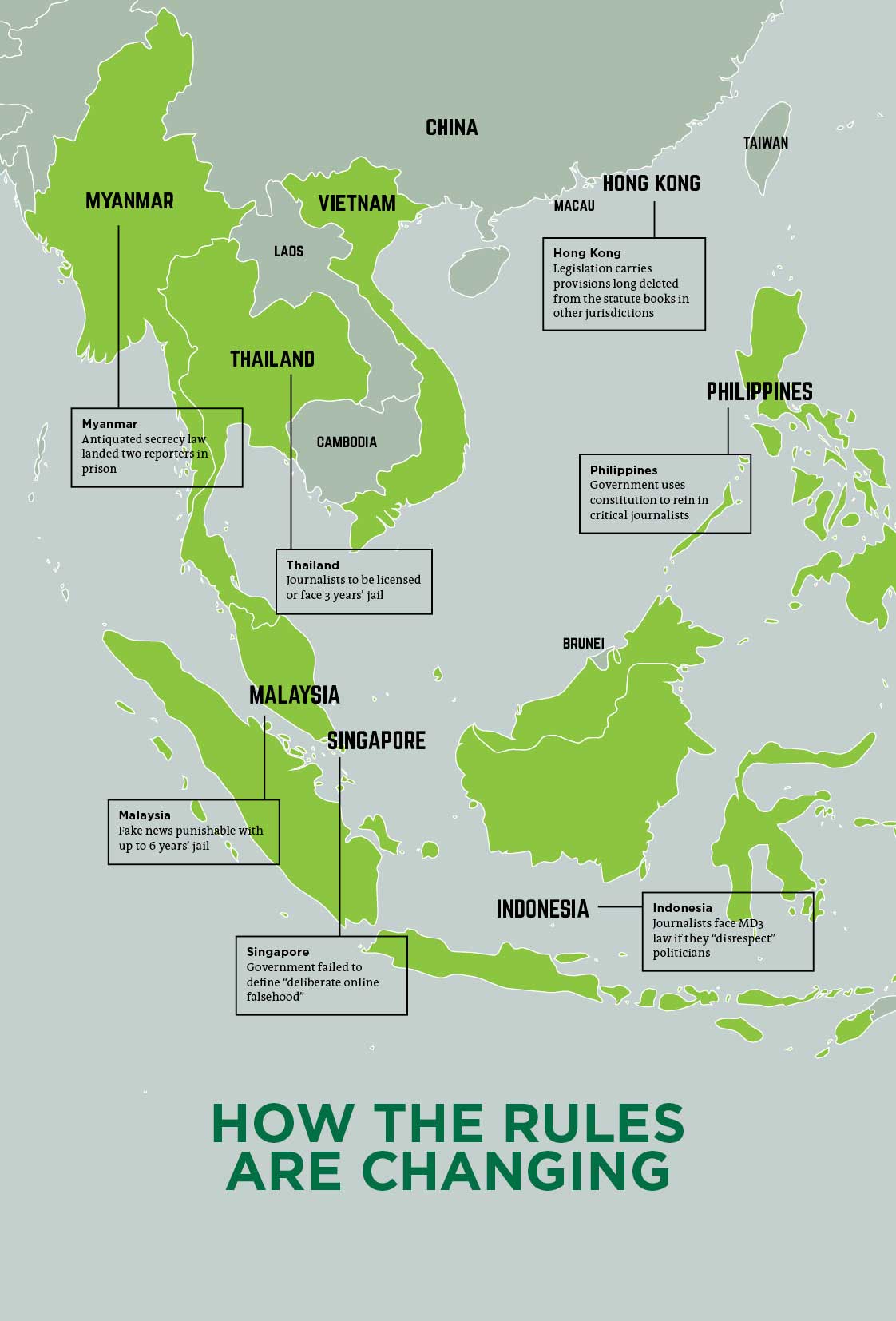 In Malaysia and Singapore, “fake news” laws have been enacted or are close to fruition. While the laws appear to have social media in their sights, journalists are wary. In Singapore, where the media already faces significant government control, an impending fake news law is viewed as potentially curbing the final frontier of free speech.

“The internet is where the government has the least control compared to the mainstream media,’’ explains Singapore journalist Kirsten Han. Han was invited to attend a select committee on deliberate online falsehoods in March this year. During five hours of testimony, she noted, not once did lawmakers define what a deliberate online falsehood would be. Regardless, the law is expected to receive legislative assent this summer.

In Malaysia, the Anti-Fake News Act 2018 has a very wide definition of “any news or information which is wholly or partly false”. Punishable with up to 6 years in jail and timed to coincide with the recent election, it took just three weeks for prosecutors to make use of the law. This came after it had taken only two weeks from its first reading for the bill to receive royal assent and be gazetted, much to the concern of the Malaysian Bar Council.

Journalists in the Philippines saw libel laws reconfigured in September to include a provision on false news, although again it is a grey area as to what actually constitutes such a falsehood. 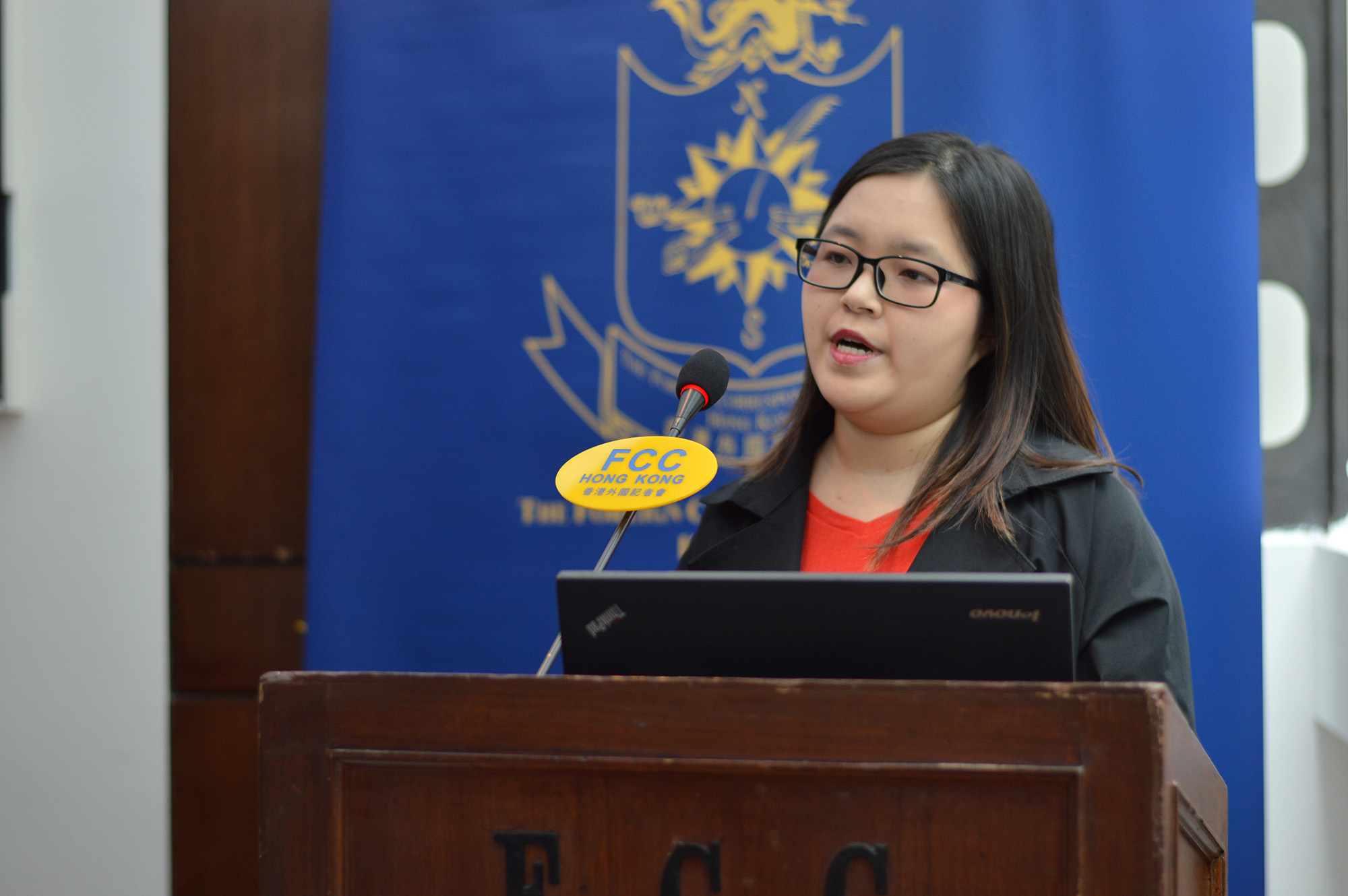 In Indonesia, the controversial 2014 Legislative Law, known as the MD3 law, was revised in March and puts journalists at risk for any comments which “disrespect the dignity of the House (of Parliament) and its members”. Indonesia’s National Press Council has called for a reversal of the law.

The Philippine government meanwhile has been making novel use of its constitution to rein in critical journalists. The popular Rappler website was found to have flouted a clause in the constitution which limits media ownership to Philippine nationals. Rappler, which has been openly critical of President Rodrigo Duterte, was shut down earlier this year after the Securities and Exchange Commission found it to have two US investors. It is still operating, despite other attempts to close it down, including allegations of tax evasion.

An antiquated secrecy law in Myanmar put two journalists in the dock in January: Reuters journalists Wa Lone and Kyaw Soe Oo have been charged under the Official Secrets Act for allegedly possessing secret government papers. The Act, which dates to 1923, carries a maximum jail term of 14 years.

It may not bode well for journalists in Hong Kong that its legislation carries provisions long deleted from the statute books in other jurisdictions: criminal defamation, seditious libel and blasphemous libel remain potential tools for prosecutors. Criminal libel laws were repealed in the UK in 2009.

In Thailand, journalists faced with already-strict media laws are seeing enhanced legal efforts to regulate the industry. The Bill on the Protection and Promotion of Media Rights, Freedom, Ethics and Professional Standards has drawn ire from more than 30 media groups in the country as a move by the government to further curtail journalists’ reporting.

A government-appointed panel will require licensing of journalists, with non-adherence liable to put culprits in jail for up to three years.

The law comes against the backdrop of a 2017 warning by the Southeast Asian Press Alliance (SEAPA) that legal means had become the “main mechanism to suppress the media” in Thailand.

Jane Moir was admitted as a barrister in 2012. She previously worked as a news and business journalist in the UK and Hong Kong, including 11 years at the South China Morning Post.