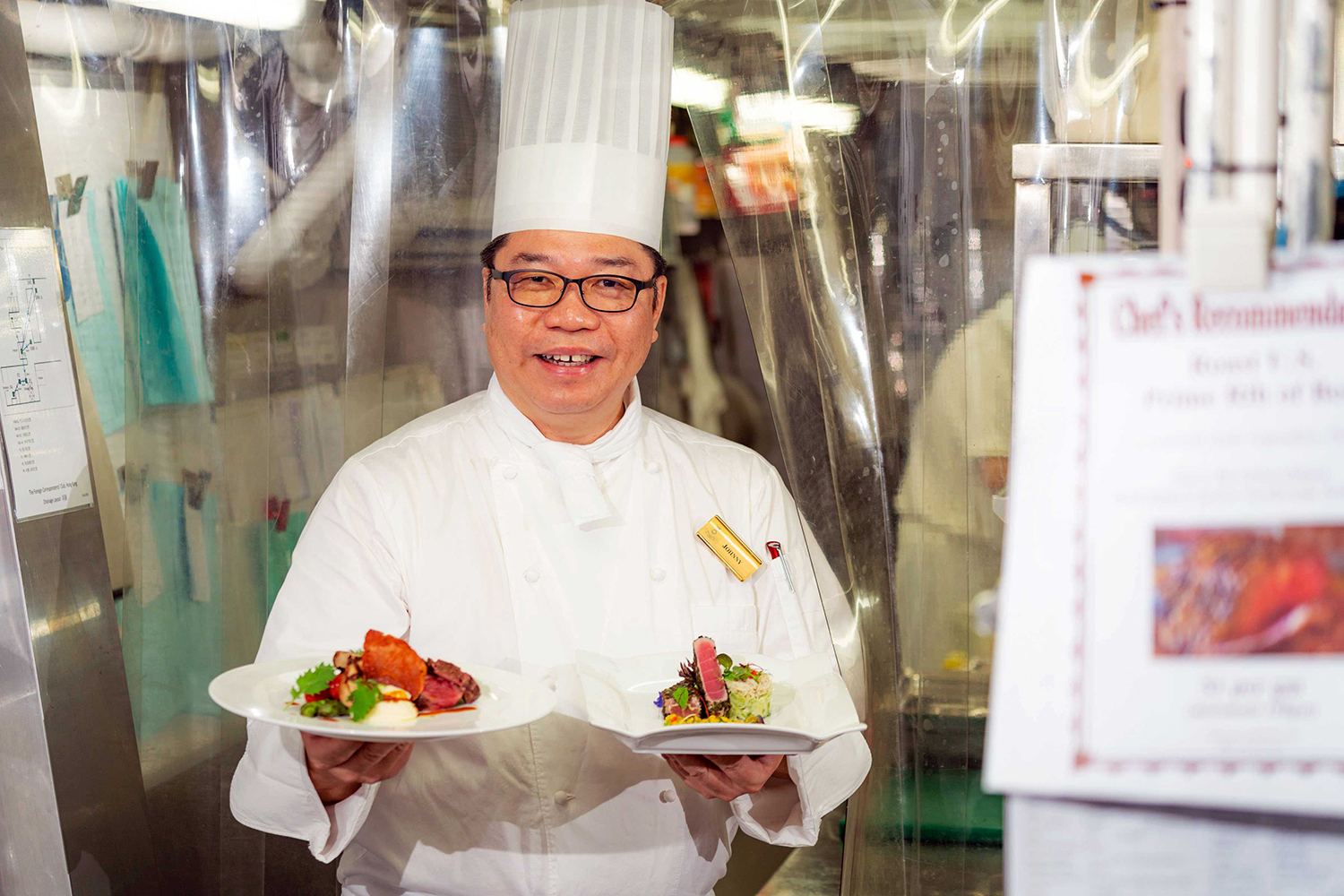 For executive chef Johnny Ma, working at the FCC is a dream come true. “It’s my cup of tea!” laughed Ma at the main bar one recent Saturday morning. For Ma, who seems to have a permanent smile on his face and a ready laugh, the FCC has it all, from a Western kitchen where he can make classic European dishes, to the colonial design of the building itself. As an added benefit, the FCC kitchen work schedule allows Ma his Sundays off, finally giving him time to attend church, as he was so rarely able to do in past jobs.

Hong Kong born and bred, Ma began his FCC career this summer, following the retirement of executive chef George Cheng. He has spent his 40-year career around the city, beginning in a Chinese restaurant as a teenager, and later working for some of Hong Kong’s top hotels. “Since I was a child, I liked cooking,” said Ma.

At age 12, Ma began preparing meals for his family at home, readily encouraged by his mother to take over in the kitchen. Just about two years later, with only a primary school education, he was in a restaurant, learning under a strict chef who would deliver a swat for any mistake Ma made. “Because they were tough, I learned a lot,” said Ma, who sees himself as a much gentler cooking coach.

Ma has developed a speciality in, and a preference for, French cuisine. Photo: carstenschael.com

It’s hard to imagine the 56-year-old Ma as a tough teacher. With a happy laugh and soft features, the bespectacled Ma is truly someone who sees his career as both an art and a lifestyle. He approaches a dish with purpose, curious about its history, conscious of cooking it to perfection, and with an added eye to its presentation. “I’m always interested to know behind the dish, what is the story,” said Ma, before launching into a tale of dried sausages and their historic use by European soldiers.

While he lauds the creativity of “New Age” chefs, Ma is often skeptical of their approach to so-called fusion dishes. Often, he said, the chefs don’t understand the base foods they are combining, or why certain flavours should go together.

Ma has developed a speciality in, and a preference for, French cuisine. The chef has even – nearly, he may say – perfected lobster bisque, and his recipe is now the standard at his former employer, the Shangri-La Hotel in Hong Kong. Tricky dishes are more fun for Ma, like seafood, which requires an exact approach to cooking time so as not to ruin it. “Cooking is an art,” he said. “You really have to concentrate on each step as you cook it.”

Ma is excited about the opportunities the FCC presents and looks forward to creating some exciting changes in the club’s menus. For instance, Ma envisions more differences between the dining venues at the FCC, and hopes to create more distinction in the type of dining members can enjoy on each floor. “I want each floor to have its own character,” he said. The formality of the upper floor would serve well for more traditional European, for instance, while the main bar is suited for casual pub grub.

Additionally, Ma plans to do four or five food promotions during the year, with themes such as Shanghainese food in February, and, his personal favourite, a French May. A Sichuan guest chef will be visiting the FCC kitchen later this year, teaching the staff some new dishes. The FCC menu has seen limited change in recent years, so Ma is ready to spice things up a bit – while, of course, leaving classics like the Indian menu untouched.

FCC members should rest assured that as executive chef, Ma will be dedicated to the kitchen. His career demands 95 percent of his concentration, leaving only 5 percent for his wife, he said with a laugh. But he has the energy to keep going, and doesn’t expect to quit the kitchen life any time soon. Even holidays leave him missing the bustle and heat of the kitchen.