News The Correspondent Fear and loathing on the Me... 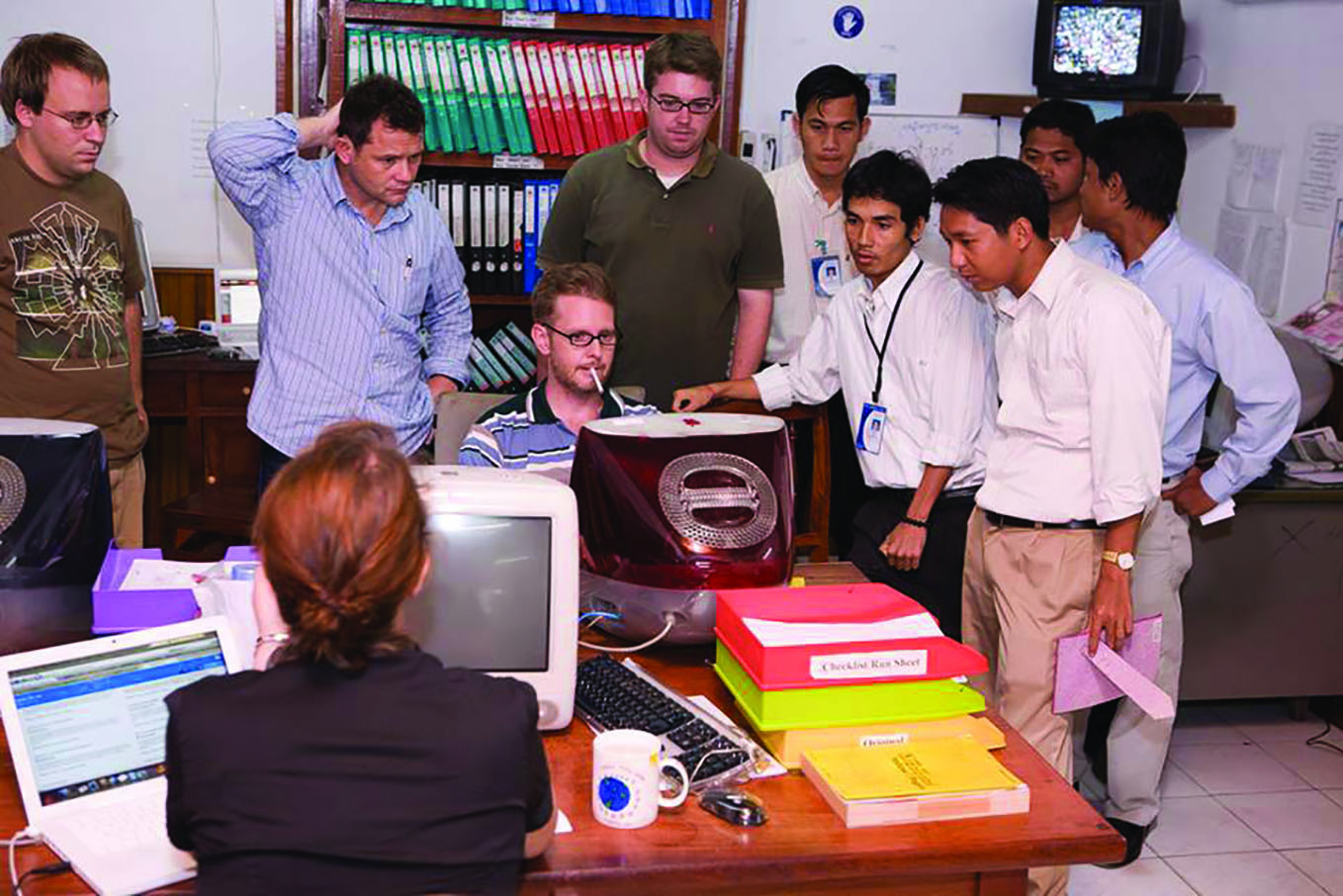 Fear and loathing on the Mekong: A tribute to The Cambodia Daily

In September muckraking English-language newspaper The Cambodia Daily was forcibly shuttered by the small Southeast Asian nation’s increasingly dictatorial regime. Its closure received international press coverage, with the New York Times calling the paper “widely respected”. Many of the Daily’s Cambodian reporters have received international awards and fellowships, while most of its foreign reporters have gone on to work for prestigious international newspapers and wire services. After 23 years in print, the paper’s demise was a sad blow to the country’s nominal democracy, and to all who had worked there. Here Kate Bartlett, who was a reporter and deputy managing editor at the paper from 2010 – 2014, remembers the dysfunction, fun, and straight-out chutzpah that was the Daily.

“Don’t walk through minefields,” the scrap of paper hanging on the wall of the Cambodia Daily newsroom advised.  It was pretty much the only rule at the small, anarchic but gutsy English language newspaper in Phnom Penh.

Legend had it that a few years previously a blind drunk foreign reporter had done just this and, though he had survived to tell the tale, the editor hung this cautionary note on the grubby wall for the rest of us.

Shortly after arriving to work at the paper in 2010, aged in my twenties and desperate to cut my teeth in journalism, I did in fact walk through a mine field – quite literally – but in full protective gear and stone cold sober.

But it was the paper’s Khmer reporters who walked through minefields daily in the post-conflict, poor, and desperately corrupt country that is Cambodia.

With a dedicated but volatile Irishman at its helm as editor-in-chief, and a foul-mouthed, chain smoking Brit as his deputy, the paper was no place for fragile egos – though there were still many – and most of us learned by omission. It really was a baptism of fire for young journalists, many of us in our first jobs.

I remember being asked by a lanky young editor after writing my very first story, with absolutely no guidance whatsoever: “Are you the worst fucking journalist ever? No really, answer me, are you?” My crime- no nutgraph. Not that I knew what that was.

Standards were high, which is what made the Daily by far the most fervent and exciting newsroom I’ve ever worked in.  In size and impact we were hardly the New York Times, but we’d be damned if we didn’t hold ourselves to the same ethical and editorial standards.

There were no false idols, we pissed off everyone at one time or another: the government, the US Embassy, the NGOs, visiting dignitaries.

Many of the foreign staff were young, bright Americans who modelled themselves on Hunter S. Thompson – which was easy enough to do in a place where drugs and hookers were plentiful and even in 2010 when I arrived there was still an atmosphere of “anything goes.”

Want to throw a grenade at a cow? Sure, for a price.

I was paid about US$800 a month when I arrived – which actually never left me short – but the small salaries were the reason the paper accepted people like myself with virtually no journalistic experience. They could hardly expect an established mid-career reporter to work for that kind of money. And money was always tight at the Daily. 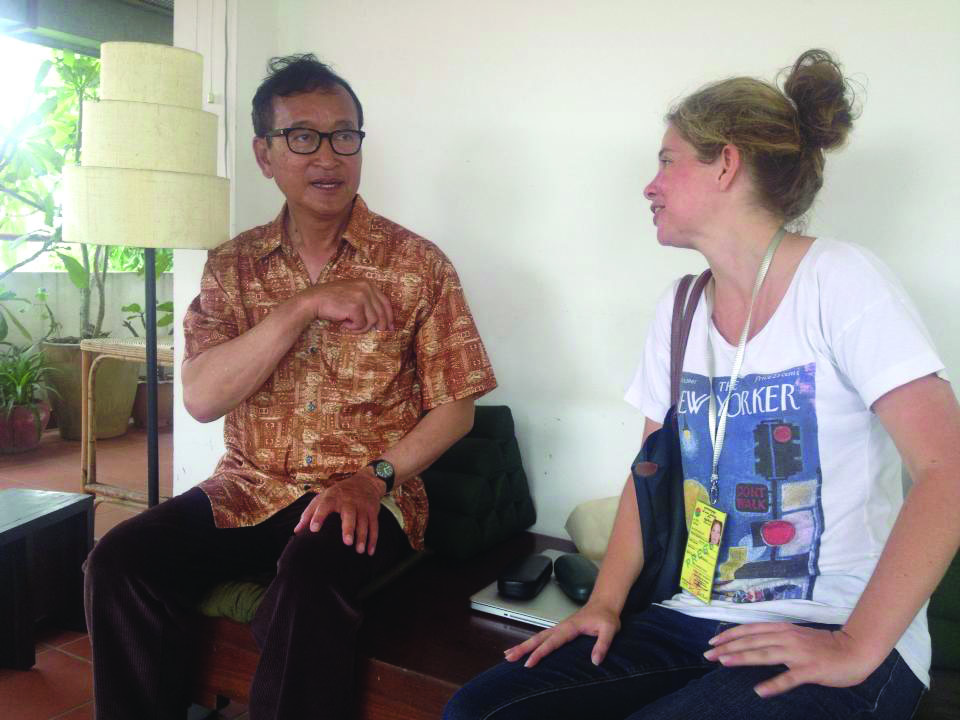 The paper had been the dream of founder and publisher Bernard Krisher, a German-born New Yorker who as a longtime Newsweek correspondent in Asia had fallen in love with the region.

Bernie, as he was known, set up the Daily – motto “All the news without fear or favour” – in 1993 as a non-profit dedicated to training a new post-war generation of young Khmer journalists in a free press.

When I arrived, the paper had already been running 17 years, and some of its local staff had been there the whole time. They were dogged and determined and exceedingly tolerant of us foolish foreigners. Most stories shared a byline between a foreign and Khmer reporter and team work was vital to your survival at the paper.

Some humid and sticky Phnom Penh afternoons, you would walk into the newsroom after lunch to find a bunch of Khmer reporters snoring soundly on spread-out old newspapers as they siesta-ed, or offering you a bite of a favourite office snack – green mango and chili, and there were as many eccentric characters among the local journalists as the foreigners.

Kate Bartlett hitches a ride with opposition
supporters during 2013 elections.

The daily seemed to attract talented oddballs, and as excellent as its output was, it was also highly dysfunctional.

In large part this was due to its eccentric publisher, Bernie.

There are many stories I could tell you about Bernie, but here’s one of my all-time favourites.

The office supplied us scribes with cheap, ballpoint pens. But getting your hands on one was about as easy as getting a Big Mac in North Korea. You had to take your old, inkless pen to our ruthless Khmer office manager for examination. If it was really used up, he would take the old pen and give you a new one. If, god forbid, you had left your ballpoint at a presser, well then, in true Soup Nazi style “No pen for you!!”

After putting the paper to bed around midnight, my colleagues and I used to hit the city’s many dive bars, complaining about Bernie and our editors and wondering whether we’d scooped loathed opposition paper The Phnom Penh Post.

Journalist Saing Soenthrith behind his desk, 2014.

Although my colleagues and I were getting our start in the business in an age of churnalism, PR, and pick-ups, this was not yet the case in Cambodia where you could still get ministers directly on their cellphones without going through a spokesman, and could doorstep people avoiding your calls at their various government offices. The access we had was amazing.

We worked 12-hour days, were often phoned at home by the editors, and when we travelled to other parts of the country, it was on the tightest possible budgets – flea-ridden hotels and long, sweaty bus rides.

With no real rules – bar the minefields one – it was up to us to decide where we drew the line on such trips.

I remember during one reporting excursion to a wild-West Cambodian province, the hire car my Khmer colleague and myself were travelling in broke down. As we were standing on the road in the middle of nowhere a passerby stopped and offered us a lift. With a jewelled pinky ring and a gun on his belt he had all the appearance of a typical Khmer gangster. I hesitated and looked to my Cambodian colleague, he was a better judge than I, I figured, and if he said it was fine to hitch a ride with this guy, then I trusted him.

We did take the ride and it was thankfully uneventful. However, after Mr. Pinky Ring dropped us off, my male colleague turned to me wide-eyed and said “Thanks god that went ok. It was a dangerous thing to do, that guy could have killed me!”

Then we both burst out laughing.

I can’t imagine a better place to get a start in journalism than the Daily. I interviewed people from all walks of life; from murderers to prostitutes to princes to ministers to monks to soldiers to film directors to farmers.

Not many readers in the wider world paid much attention to Cambodia, synonymous to most only with the murderous Khmer Rouge regime several decades before. But we cared greatly and that’s what mattered. Sometimes I thought we thought too much of ourselves – “speaking truth to power”, being a voice of accountability in a kleptocracy bla bla bla — when in fact, our readership was largely limited to city folk and intellectuals and didn’t reach the huge number of people, many illiterate, in the countryside.

Until its recent sad closure, I believed this was the reason why the Daily was allowed to keep printing, no matter the damning truths about the government it unearthed and published.

I have been proved wrong. The Hun Sen regime is scared, very scared it seems. With still months to go until 2018 elections, I think we may only have seen the tip of the iceberg as Cambodia gives up any pretense of being a democracy.

For those of us that worked there however, foreign and Khmer, our years at the crazy little-paper-that-could permanently changed us. And I’d like to believe that 23 years of the Daily changed Cambodia too. This next year will test that theory.