News The Correspondent Finding the human face in a... 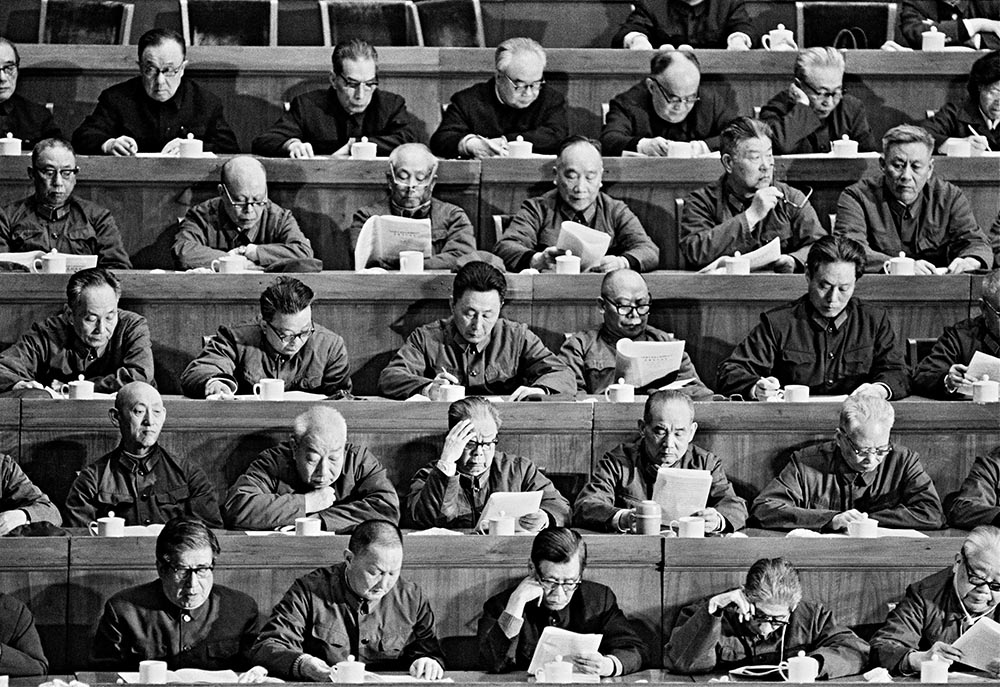 Finding the human face in a Sea of Red

Hong Kong-born photojournalist Liu Heung Shing has been described as “The Cartier-Bresson of China” and his beautiful new book, A Life In a Sea of Red, chronicles turbulent points of history in China and Russia. Jonathan Sharp, who has known Liu since the 1980s, takes a look.

The late, great London Times correspondent David Bonavia wrote a typically entertaining book about his experiences of reporting in Russia (which expelled him) and China. Published in 1987, it is called Seeing Red.

Now, another old China and Russia hand, Pulitzer Prize-winning photojournalist Liu Heung Shing, has produced a truly magnificent volume of his images recording pivotal periods in both nations’ recent history. It’s called A Life in a Sea of Red.

I came to know Liu in the early 1980s when he was in Beijing working for the Associated Press and I was there for Reuters. Liu and his AP boss, Vicky Graham, were formidable competition professionally but also fine, generous company socially. 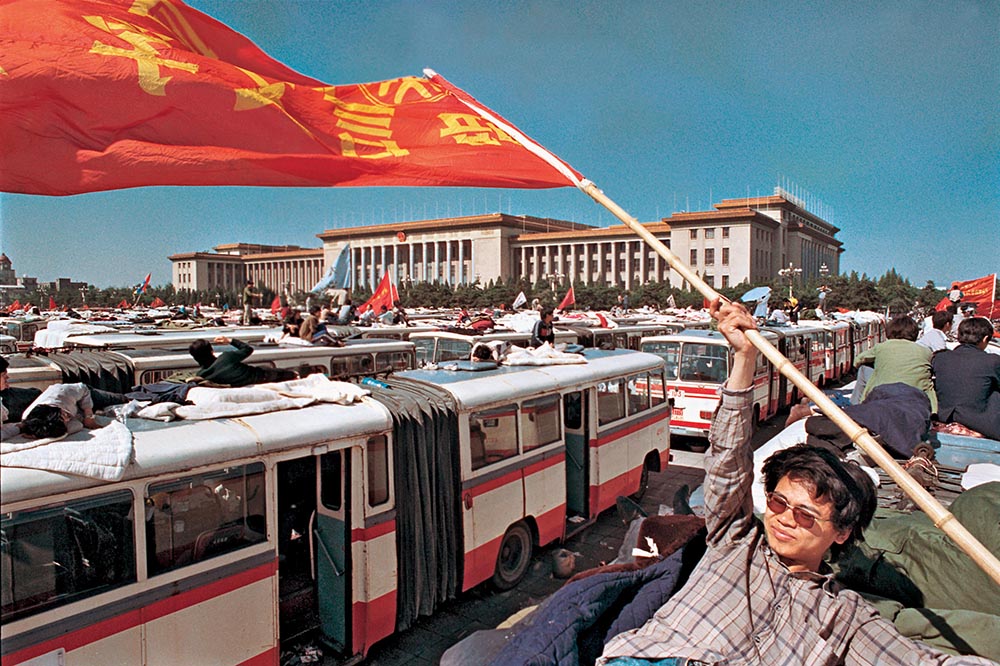 I was lucky enough to be in Hong Kong in 1983 when Liu launched – at the FCC of course – his first book, China After Mao, chronicling how China was gradually coming out of its shell after the catastrophes of the 1966-76 Cultural Revolution.

Forward to 2008 and Liu presented at the Club his magisterial China: Portrait of a Country for which he spent four years trawling through images taken by 88 Chinese photographers covering the first decades of Communist rule.

Now, the images in his latest book, sumptuously published by Steidl, are Liu’s work alone, bringing together his stunning record of the astonishingly rapid changes he has witnessed both in China and Russia. I am proud to have all three books on my shelves.

At an FCC lunch on April 1, Liu spoke about his amazing journey. Born in Hong Kong but raised in Fuzhou in east China, Liu has stark memories of the famine resulting from the 1958-60 Great Leap Forward, seeing his neighbours with limbs and faces bloated by malnutrition. Tens of millions starved to death. Understandably that left an indelible impression.

Liu told us that his first China assignment for Time magazine, to cover the aftermath of Mao Zedong’s death in 1976, was a “miserable failure” because he couldn’t get to Beijing, where the Gang of Four led by Mao’s widow Jiang Qing were about to be arrested.

But not a complete failure. While languishing in south China on the banks of the Pearl River, he said, “I saw the Chinese with an entirely new set of body languages. Soon after Mao’s death I noticed the faces of people seemed more relaxed, their eyes less scrutinising of visitors from abroad.” He knew then that, given the chance, he wanted to return to China as a photojournalist. 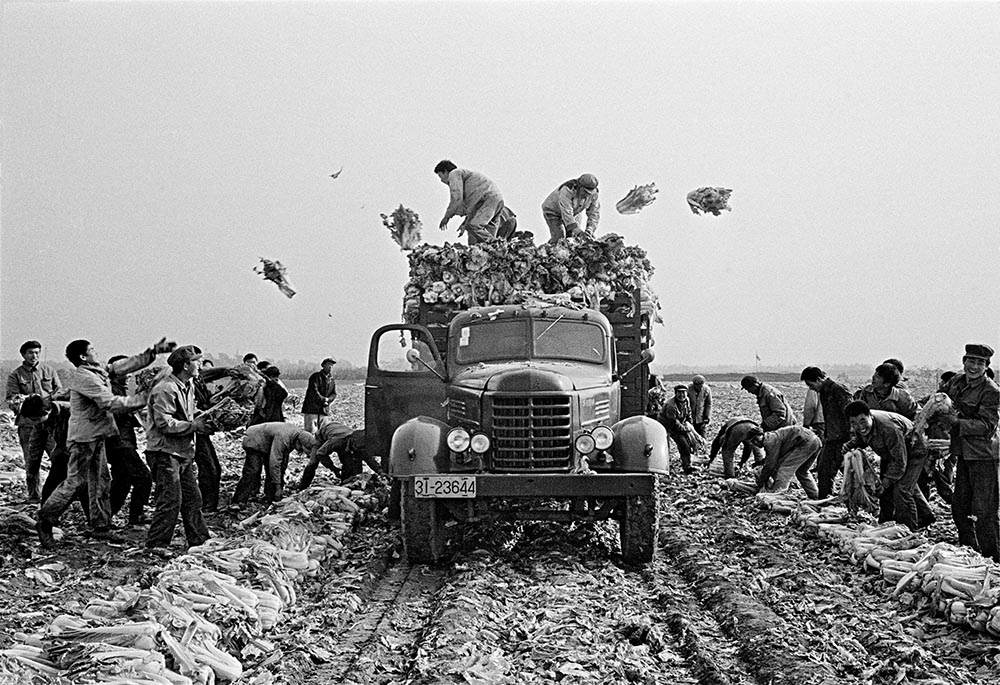 Peasants at Evergreen Commune outside of Beijing toss cabbages – the only vegetable available in winter – onto a slow-moving truck in 1980. Photo: Liu Heung Shing

And he has seized those chances, witnessing and recording how China has moved from a life of rigid collectivism into a more individualistic style, albeit under repressive Communist rule, with smashing success. The Cartier-Bresson comparison from Newsweek is just one of his many richly deserved garlands.

So he was in China for the Democracy Wall period in the late 1970s when millions of Chinese poured into Beijing to express their grievances and sufferings. And he was in Beijing in 1989 when China stamped out the student-led protests centred in Tiananmen Square.

Liu did not take the famed “tank man” image of a lone protester facing down a line of PLA tanks. But he was instrumental in getting the precious roll of film, with that highly sensitive image on it, safely transferred across a city under martial law from the photographer, the AP’s Jeff Widener, to an office where Liu could transmit it. The unwitting “pigeon” carrying the film was a pony-tailed American backpacker.

Liu’s own image from that horrific episode, of a young loving couple with a bicycle beneath a bridge bearing tanks rolling by, also won world-spanning play. Most recently it was reprinted in the May 25 Financial Times marking the 30th anniversary of the Tiananmen crackdown. 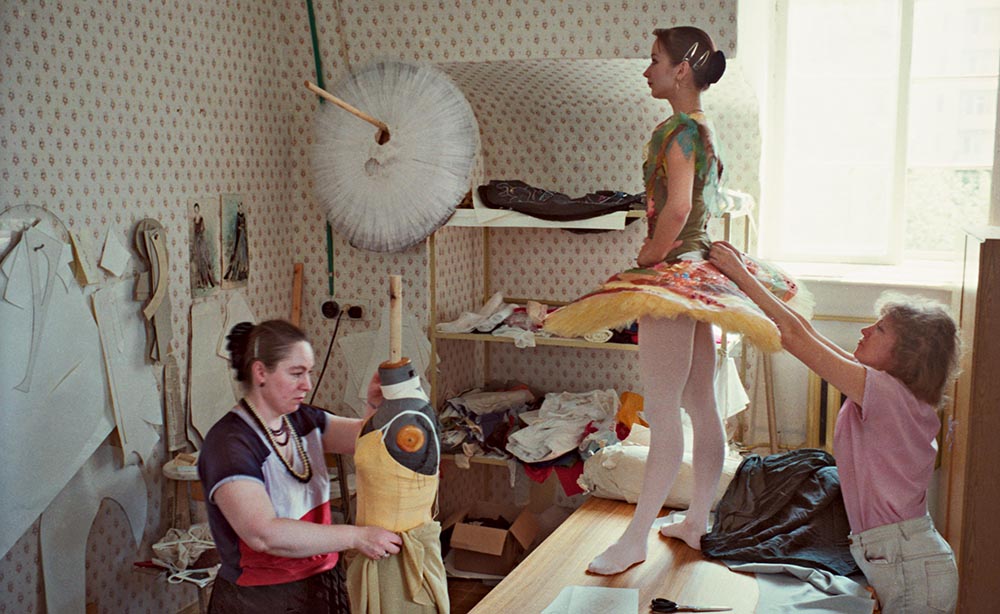 A young ballerina has a costume fitting in Moscow, 1993. Photo: Liu Heung Shing

Liu’s time in Moscow also coincided with an equally dramatic turning-point in history, nothing less than the collapse of the Soviet Union. One of his better-known images is of Mikhail Gorbachev putting down his resignation speech on a table. Liu took a calculated risk of using a slow shutter speed (1/30 second) to show the motion of the paper being placed down. The whole picture could have been a blurry mess but Gorbachev himself came out sharply.

Liu told us about the startling changes occurring in photo-journalism – in 2017 more than 2.7 trillion images were dumped on Instagram – and that he himself no longer hurtles around to cover the world’s news hotspots.

Instead, he prefers the more gentle art of portraiture. He also looks after the ground-breaking, stylish Shanghai Centre of Photography, which he founded in 2015 as the city’s first museum dedicated to photography.

One of my favourites among Liu’s images is of a Chinese woman having an “eye job” in Beijing in the early 1980s, a procedure that makes her look more Western. That played into a cosy narrative commonly accepted at the time that as China modernised and prospered, it would become more like the West, increasingly democratic and moving closer to embracing Western liberal ideals.

That, as headlines now remind us on a daily basis, has not happened.