News The Correspondent George has left the kitchen... 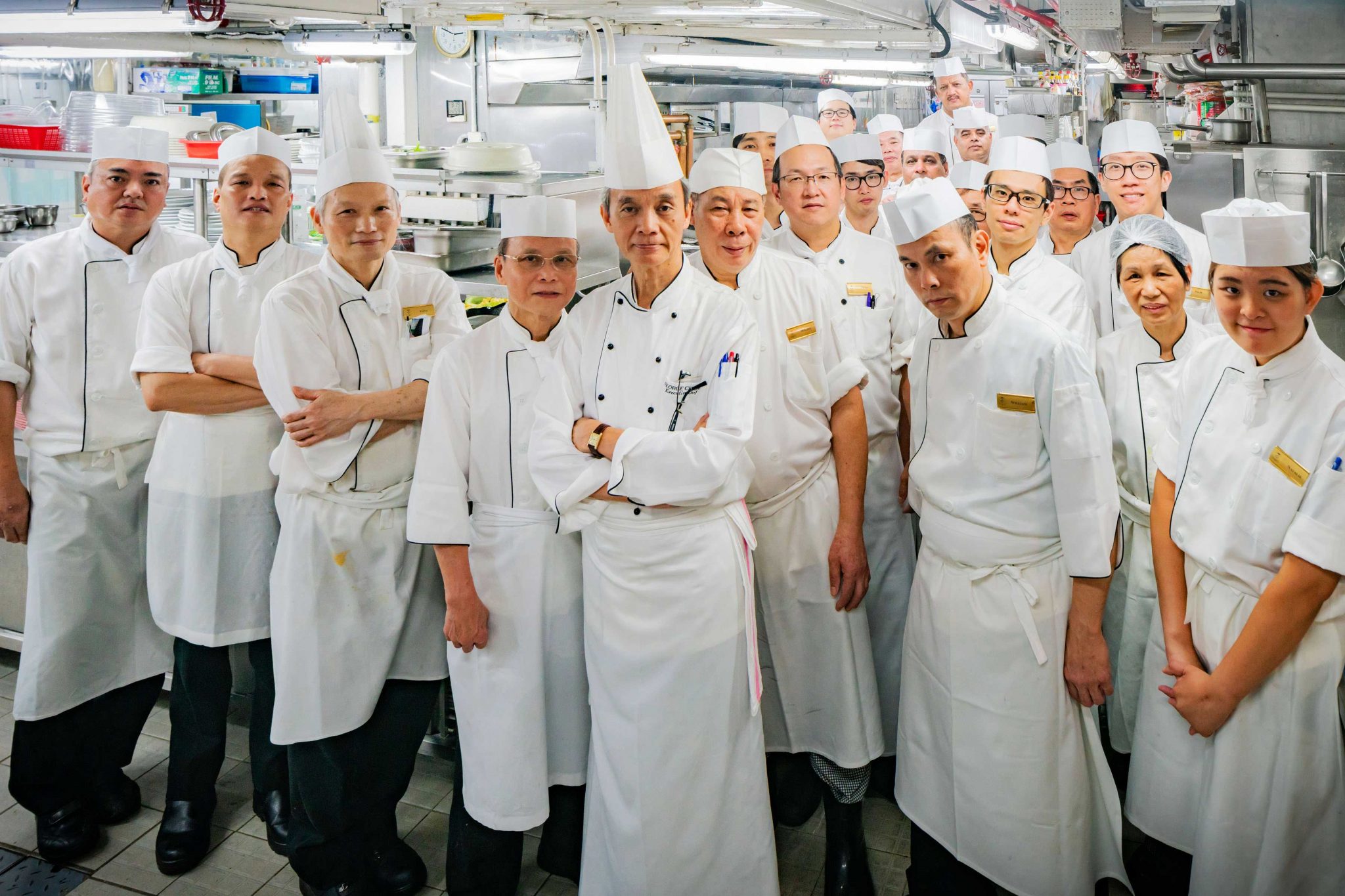 George has left the kitchen: Executive chef retires after 11 years at FCC

Changes are afoot in the FCC kitchen. After 11 years presiding over his culinary kingdom, George Cheng retired as executive chef of the FCC in mid-May, writes Morgan M. Davis.

George with his hard-working team in the club’s newly refurbished kitchen.

George’s retirement to Australia comes after years of cooking in kitchens around the city and the region, from beginning as a kitchen apprentice at 15 years old in Kowloon to creating gourmet dishes at top-tier Western hotels. George, who was trained in Western cooking, came to the FCC in 2007 after working as second chef at the Hong Kong Football Club for six years. The FCC, he says, has been a “very stimulating” experience as he and his team worked to constantly update the menu to meet the requests of the club’s members and catered to special events, while also maintaining the quality of the dishes the members love so much.

Keeping up with the dynamic tastes of the FCC’s diverse members was no easy feat. George attributes much of his success to his team of 26 that pack themselves into the FCC basement, whipping up everything from the FCC’s famous curries to the necessary local dishes to the special event pairings and thematic meals. “Some days I was like a chicken without a head in the kitchen,” he laughs. During busy days, the kitchen staff makes 300 lunches, while also planning for evening banquets with dishes to be perfectly timed in their presentation between speeches. Adding to the challenge is the relatively small size of the FCC’s kitchen, pushing staff nearly on top of each other as they balance different flavour combinations. And once the food is ready, the team has to rely on an old-fashioned dumbwaiter lift to deliver the food at what may seem like a glacial pace.

The challenge of the FCC’s constantly updated menu kept George on his toes. “As you’re growing up, you have to keep your eyes open,” he says of his ever-developing skills. “On days off, I would go out with my wife to taste Chinese food and see what they were cooking, and then give some comments to my Chinese chefs.” 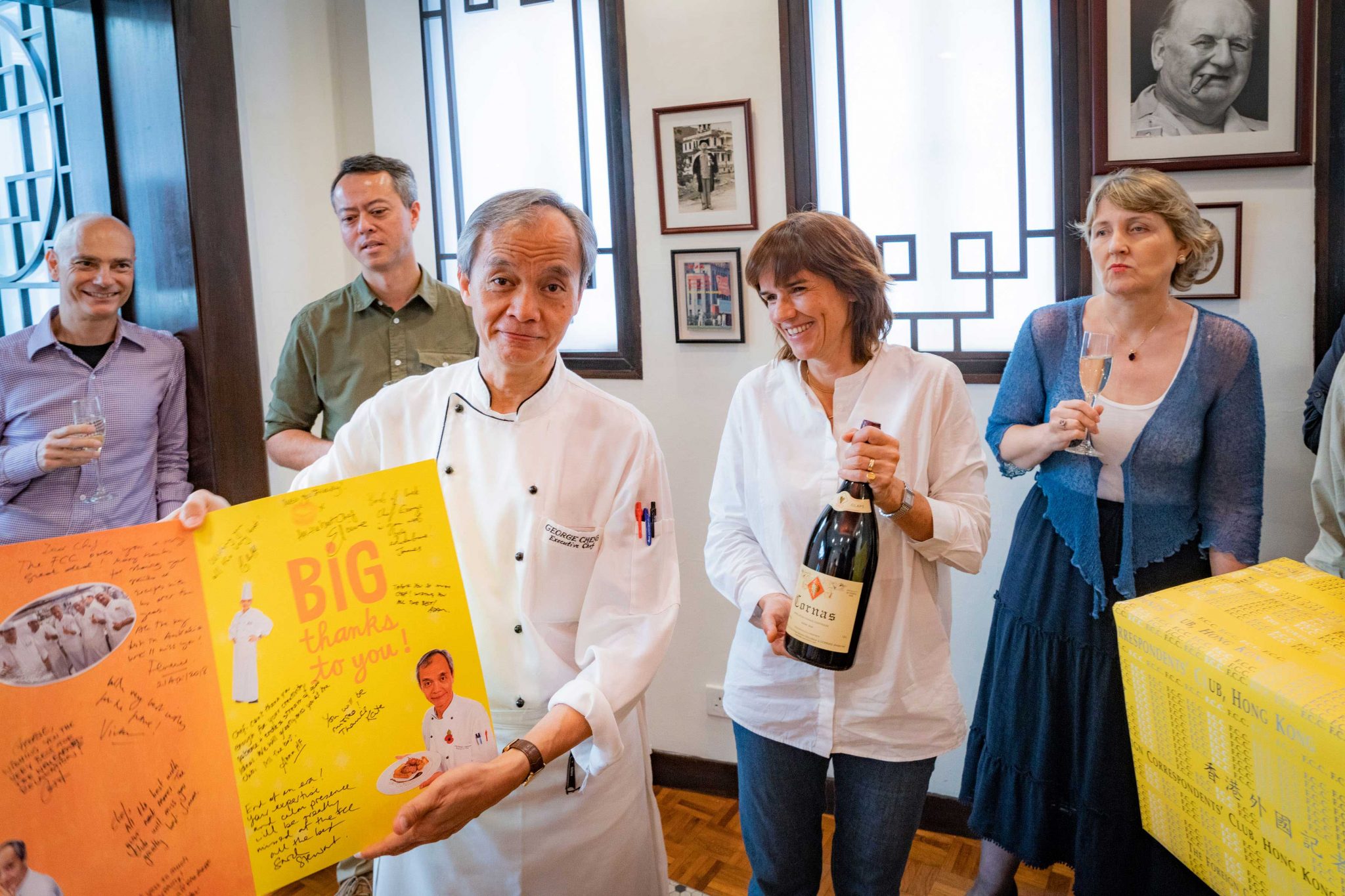 George’s own tastes are eclectic. He favours local food like roast duck and Chinese soups, as well as pho and other Vietnamese dishes. With his son, who works in a hospital lab in Hong Kong, pizza is their go-to meal. But when he cooks,

George harps back to his training, tending toward Italian pastas, beef bourguignon, and hearty stews.

That kind of knowledge, once you learn it, no one can take away

While the FCC will certainly miss the innovative foods and pairings George has helped bring to the Club, the chef is optimistic that the time is right for a successor and new blood to mix things up further. “My energy is gone,” George says.

George is ready to take a pause from the long, late hours required to run top-notch kitchens. “Working in hospitality is working day and night,” he says. “When you’ve worked more than 50 years in hospitality, it’s physically, mentally and emotionally exhausting.” After spending so much time working away from his family, George is ready for his sons, now 27 and 28 years old, to see more of him. “Sometimes I feel guilty,” he says. “When my boys were younger I did not have the time to see them grow up.”

But George doesn’t regret the opportunities he was afforded working his way up in Hong Kong’s kitchens. When he started as a pot washer to help support his family in the late 1960s, George couldn’t speak English or peel a potato. “Then a Chinese chef pulled me over and said, OK, learn something, try to peel a potato, try to peel an onion,” he recalls.

The eager George was a quick learner, filling his brief breaks from the kitchen with English lessons, while progressing in his cooking skills. “That kind of knowledge, once you learn it, no one can take away,” he says.

Even in retirement, the 65-year-old doesn’t plan to stop. He is hoping to find volunteer work to keep him busy in Sydney. But, he laughs, “I don’t think I’ll be going back to a hot kitchen!”

Morgan M. Davis is a finance reporter at Euromoney’s GlobalCapital. The Illinois-transplant moved to Hong Kong two years ago by way of New York City, accompanied by her trusty sidekick Gizmo the Yorkie. Morgan has reported on multiple sectors of finance, and holds a Master’s degree from Columbia University.