News The Correspondent Get to Know the Stories Beh... 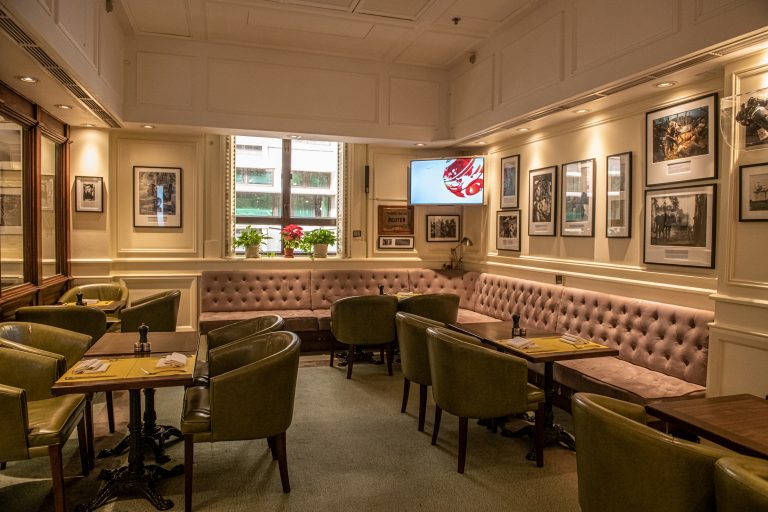 Get to Know the Stories Behind the FCC’s Various Rooms

It’s perhaps just as well that the FCC’s walls can’t talk, but there’s a great tale attached to many of its rooms, says Robin Lynam.

Extraordinary though this may seem, back in 1991, when FCC President Peter Seidlitz suggested turning a corner of the Main Bar into an enclosed non-smoking area, the proposal was considered controversial. 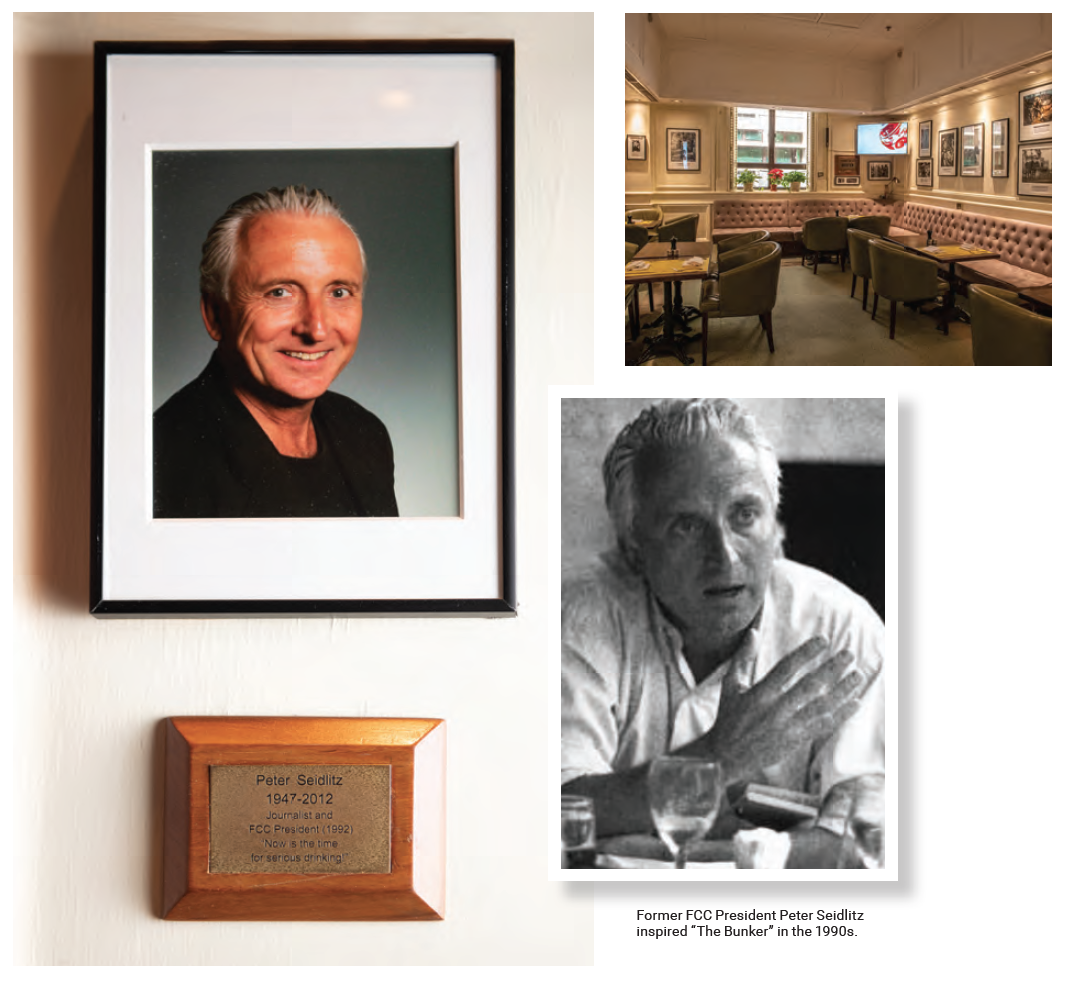 To discourage opposition, Peter suggested that it be called the “Clare Hollingworth Room”. Who could then object?

Clare did. At 80 years old, she pointed out that she was still alive and did not yet want a memorial. The space went unnamed – sort of. Everybody called it the “Führerbunker”. After Peter died, aged 64 in 2012, it was officially renamed the “Peter Seidlitz Bunker”. He would have liked that.

Peter, a flamboyant, capable, and very well-connected journalist – also a noted art collector – was described in one obituary as the “Giorgio Armani of foreign correspondents”. He is also one of a select few FCC members to have had a club space named after him. 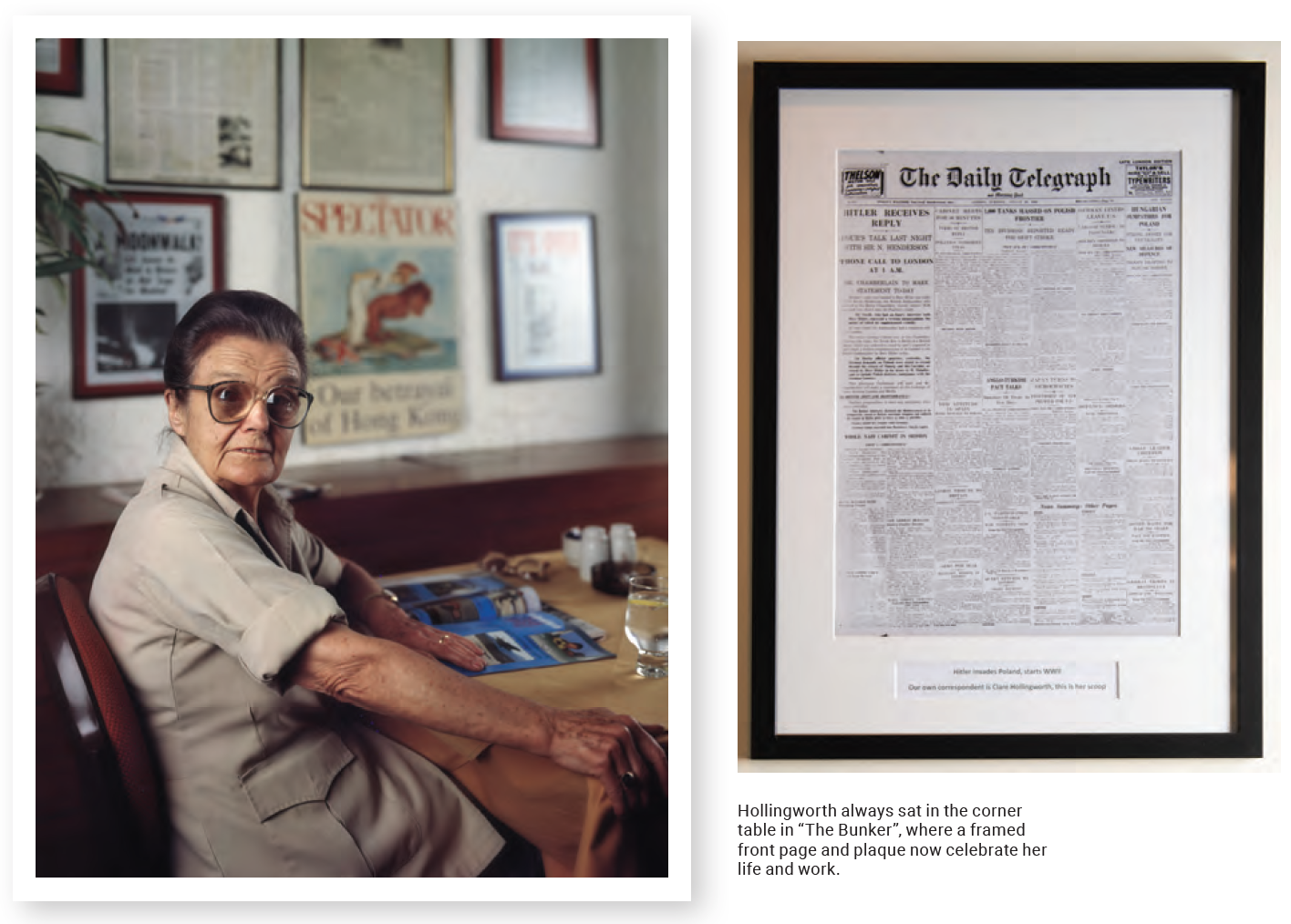 The first was Richard Hughes, whose photograph hangs in the Hughes Room and in the Main Bar, where his sculpted head still greets visitors. He died in 1984 at the age of 81.

A foreign correspondent of distinction who made his name in the 1930s reporting from Japan, Richard was probably also an intelligence agent – perhaps even a double. Though disputed, that might explain his 1956 scoop – interviewing British defectors Guy Burgess and Donald Maclean in Moscow, whence they had fled in 1951. 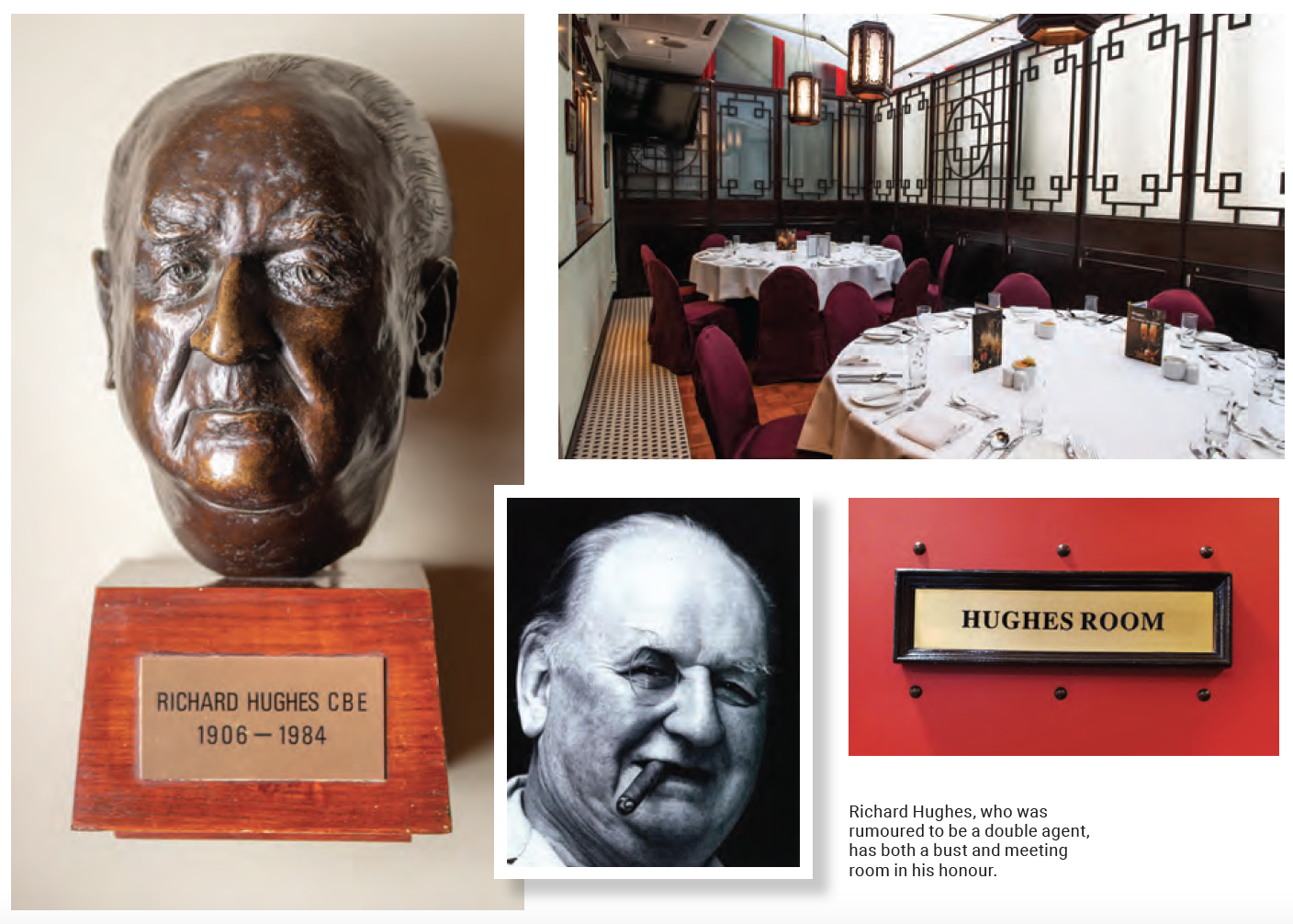 He appears in fiction as Dikko Henderson in Ian Fleming’s 007 yarn You Only Live Twice, and as Old Craw in The Honourable Schoolboy, whose opening chapter John le Carré set in the FCC’s Sutherland House premises near Statue Square, which we quit in 1982 for our present location.

Adjoining the Hughes Room – and sharing its role as a pop-up Chinese restaurant – the Burton Room is named for Sandra Burton, another distinguished journalist, but of a very different stamp.

One of TIME magazine’s first female correspondents, she is perhaps best known for her coverage of the 1983 assassination of Benigno Aquino Jr in the Philippines and of the 1986 People Power revolution which followed. She was also, characteristically, in the thick of things in 1989 in Tiananmen Square. 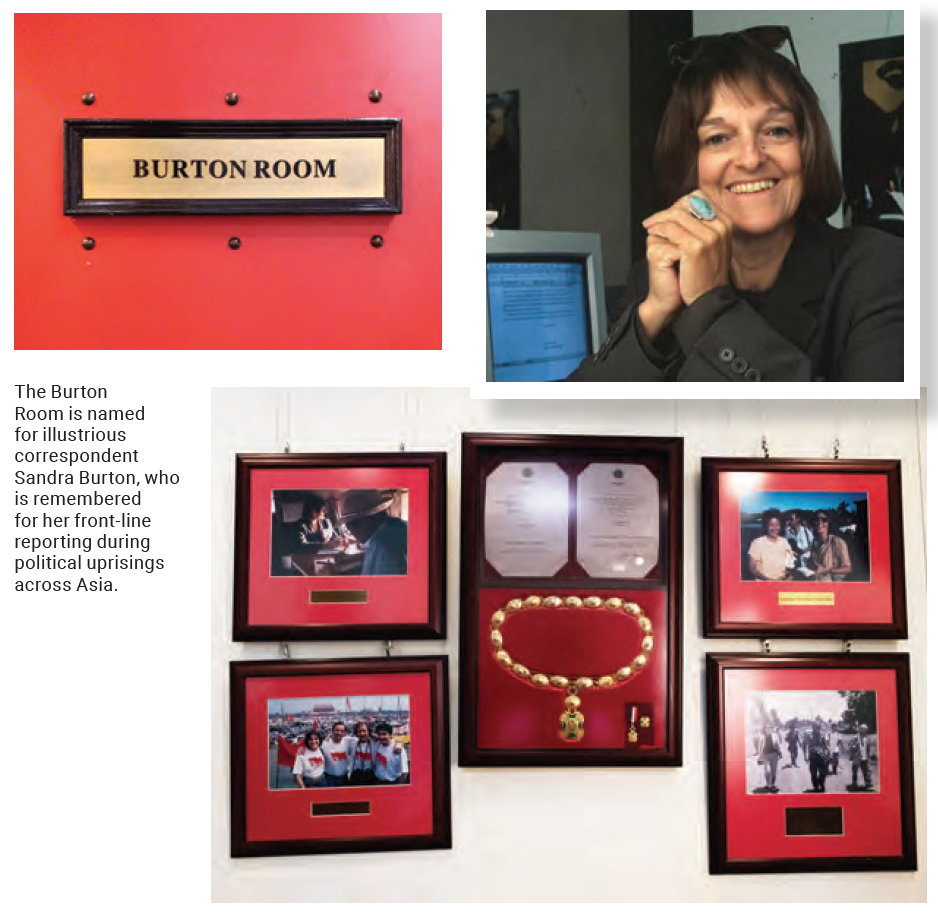 Sandra died tragically early at 62 in 2004, a gifted and accomplished journalist, who was universally admired for her professionalism and integrity.

UPI correspondent – and another FCC President – Bert Okuley, died in 1993 aged 58. He was a fine editor who probably could have made another career as a jazz musician, hence the name of the club’s cellar bar and jazz club.

A photograph in Bert’s shows him with fellow pianist Larry Allen, who on Saturday evenings during the 1990s used to play and sing in the Main Bar. In the photo, Bert can be seen declining an invitation from Larry, who knew how good Bert was, to take over his seat. 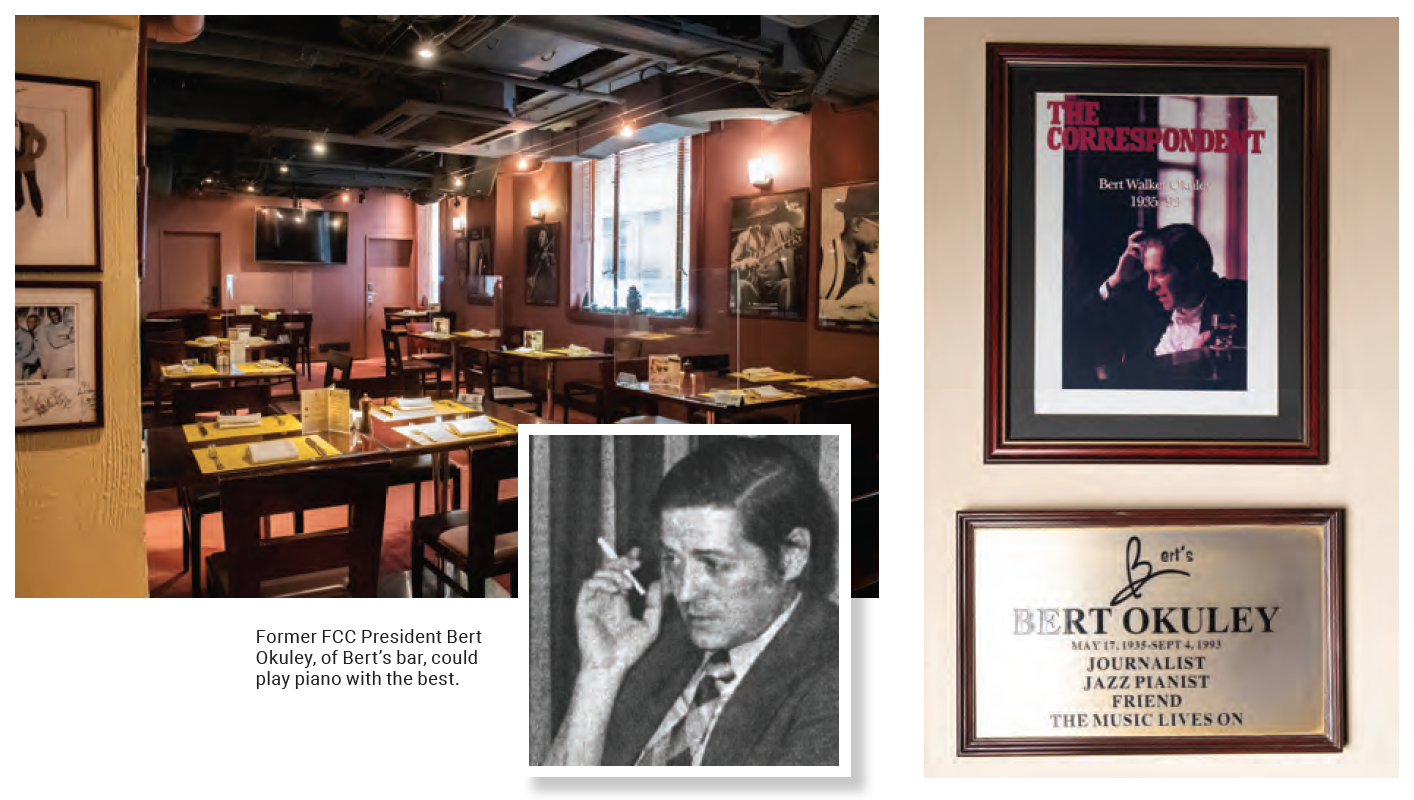 I occasionally joined Bert at the bar where he often studied horse racing form, and I wish I’d taken some tips. He gave good ones – such as this from 1975 to a UPI photographer in Saigon: “Van Es,” he shouted into a darkroom, “Get out here. There’s a chopper on that roof!”

The photo exhibit wall at the rear of the Main Bar is named after Hugh Van Es. He did not consider that helicopter photograph his best, and there are many finer ones from a career which ranged from shooting 1960s pop stars in Europe to the 1979 Russian invasion of Afghanistan. 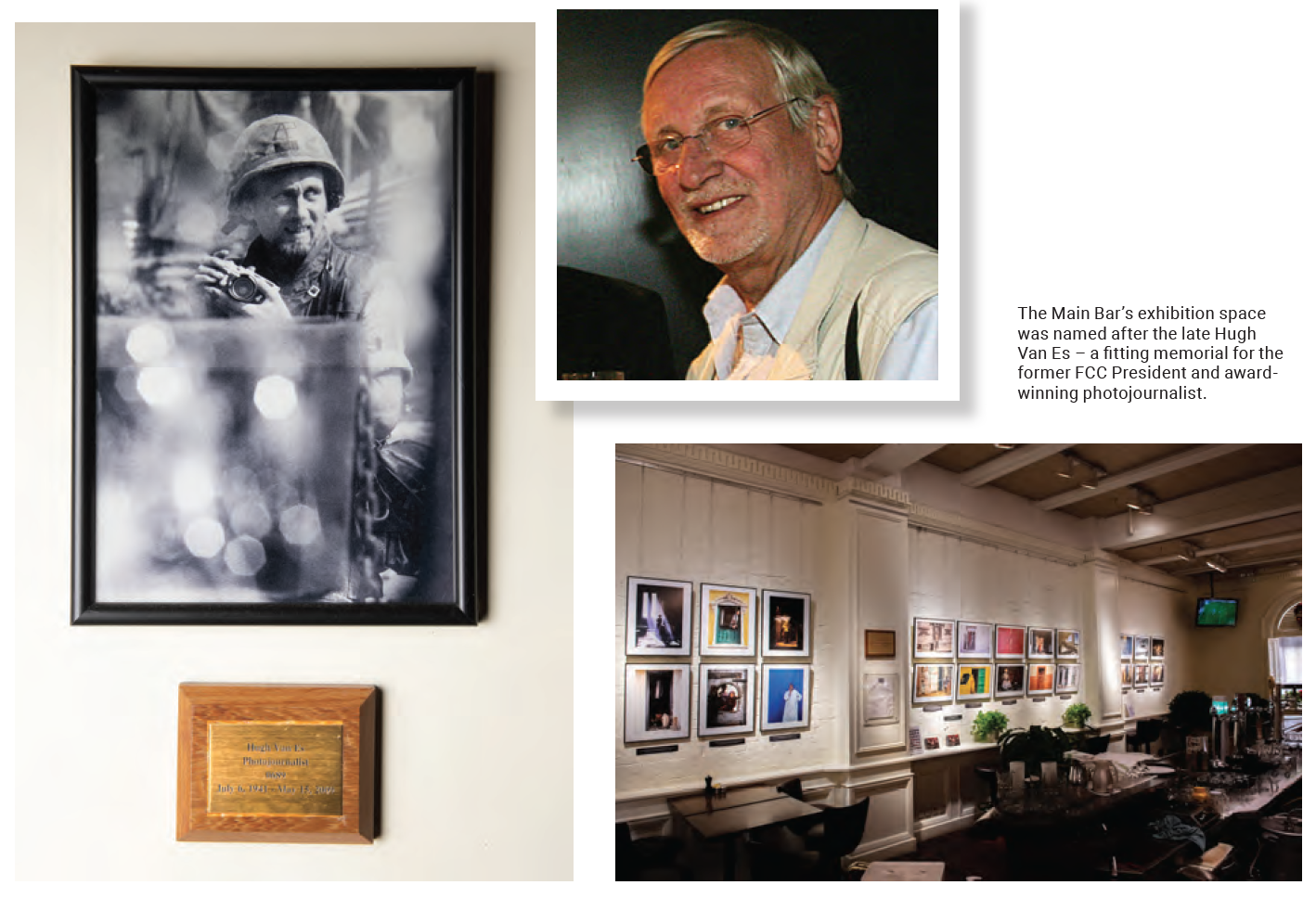 The wall is an appropriate choice of memorial for Hugh, who died in 2009 at 67. He was a connoisseur of good photography, generous with advice and encouragement to less experienced fellow professionals, and to amateur snappers. He was also an FCC President, a long-serving and valuable board member, and for several years, the custodian of the club’s liquor licence.

Virupax Ganesh “VG” Kulkarni – whose name adorns the Workroom – was also a senior FCC Board member. He started his professional life as an officer in the Indian army, before transferring to the diplomatic corps, and finally settled on journalism, most notably at the Far Eastern Economic Review where he became Regional Editor. 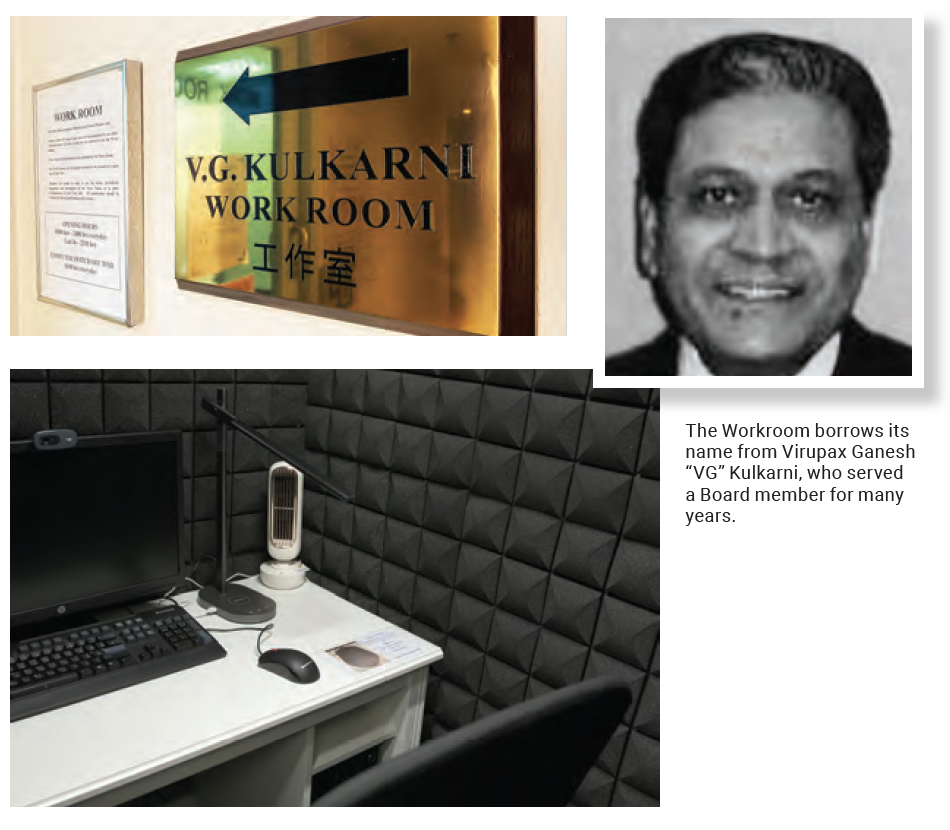 Later he pursued a freelance career. The club was his second home, and he was a frequent genial presence in the Workroom. He died – in the Health Club sauna – in 2014 at the age of 77.

Notwithstanding Peter Seidlitz’s offer to Clare Hollingworth, the honour of having an FCC space named after you has only ever been awarded posthumously.

Now Clare, too, has her corner. After she closed her last bar bill – in 2017 at the age of 105 – the club mounted a photo of her in the Bunker over what was for many years unofficially, but entirely inflexibly, her table. Whoever sits at it today, so it remains.