News The Correspondent Get your motor runnin’… The... 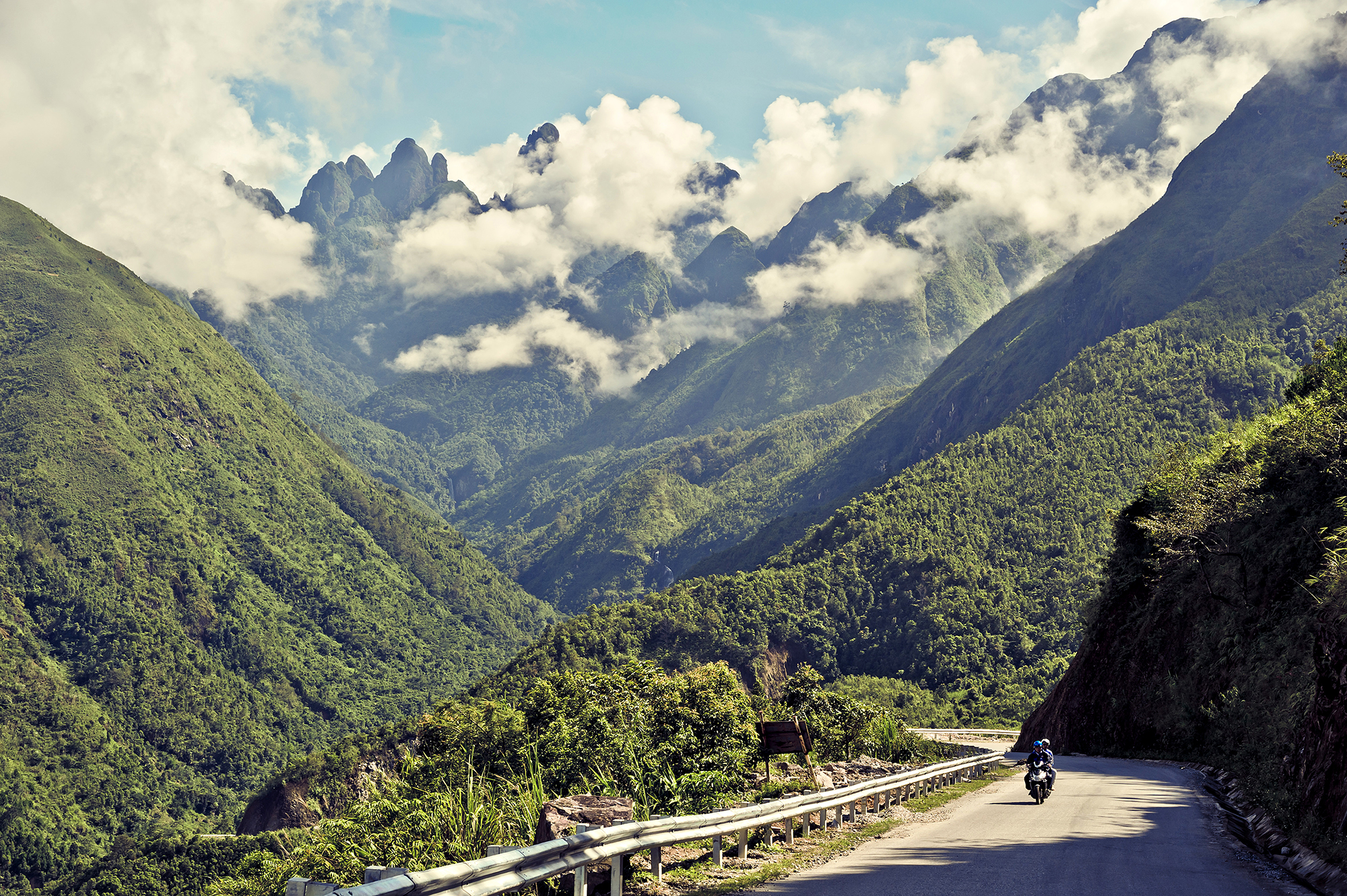 Four years ago photojournalist Richard Dobson realised a long-held ambition to drive his bike from Saigon to Hanoi the hard way, avoiding the busy coastal road and seeing as much of the interior as possible. Using his Facebook postings for reference, he recollects the highs and lows of his 52-day trip.

I’ve always liked the idea of taking a road trip on my 1995 100cc Honda Dream and since living in Saigon the urge to go up north has been growing. But I wasn’t interested in just going to Hanoi on the coast road, I wanted to plot a course that would take me into the hinterland, the mountains, the jungle, the hidden valleys.

It just so happened that one of my clients was looking for fresh images of Vietnam for their website so they agreed to sponsor my crazy dream and I was on my way.

Bike prep was minimal. Field attire. Mao Blu fisherman pants, khaki long sleeved shirt and black rubber thongs. Reconnaissance gathering tools consisted of two Nikon D700 cameras and half a dozen lenses all wrapped up in a black plastic flight case and strapped to a rather flimsy luggage rack with more than enough bungee cords. On July 16, 2013 the adventure began. Some of the many highlights follow.

Took 12 hours to ride 234 km to Dalat, the hill station founded 200 years ago by French bacteriologist Alexandre Yersin. The last five hours were in the dark with buses and juggernauts coming at me head on, overtaking each other at speed with headlights at full beam, and me bumping over potholes the size of bomb craters. I can’t see a bloody thing and my only course of action to defer imminent death is to swerve off the road altogether into the even more indented and muddy soft shoulder. From now on no more night riding.

Some serious picture taking today – this town has it all. A cooler climate, so strawberry, blackberry and flower cultivation bar none, and a legacy of fine French architecture represented by the Cremaillere railway station and myriad abandoned art deco villas. Now akin to a city,  Dalat’s former bohemian air has vaporised into scooter fumes!

The My Lai massacre is probably one of the most infamous events of the Vietnam War. It took place on March 16th 1968.

One soldier, Varnado Simpson, who was at My Lai in December 1969 said: “Everyone who went into the village had
in mind to kill. We had lost a lot of buddies and it was a VC stronghold. We considered them either VC or helping the VC.”

Each of those photographed told me how they managed to survive. A very sobering narrative indeed

Today I met four of the 10 survivors. Most of the 500 population perished. Each of those photographed told me how they managed to survive. A very sobering narrative indeed.

Concentrated on portraits today and found some real gems. Mr Nguyen Minh Nguyet, 78, a highly decorated veteran of the war and his delightful wife proved to be perfect subjects. Minh joined the North Vietnamese army in 1950 and is a decorated veteran of the Dien Bien Phu. He met his wife, a transport logistics officer, on the Ho Chi Minh trail. It’s a miracle both of them are still alive.

Yesterday was a downer day. Crap road. Crap towns, and crap sights…so today the mood lightens and I shoot a pic I think will make a showpiece for my photo gallery back home. A young boy jumping off the wall of a partly submerged temple into the Song Van river. The crumbling stucco of the temple facade, the languid river and surrounding lush vegetation creates to my mind a scene that is almost like something out of Raiders of the Lost Ark. Exotic, mysterious — are we in Joseph Conrad country? So now I’m here in Ninh Binh, and the dramatic limestone karst landscapes so famously depicted in the myriad pictures of Halong Bay begin to appear.

A day getting dirty with the Montagnards.

Yes, those marvellous people of the mountains are awe inspiring in their dexterity up and down muddy, rocky mountain paths. Men and women, old and young, hauling heavy sacks of corn cobs from dawn until dusk and doing it with such grace and fortitude, all the while looking so resplendent in their hill tribe regalia.

The apex of my trip is Lao Cai/Sapa. Pretty much as far north as you can go in Vietnam and now after 43 days of travelling I begin the long road south, back to Saigon. I set off due northwest and then south over the Tram Ton Pass. At 1900m, it is the highest mountain pass in Vietnam and as I wound my way over the Hoang Lien mountains the views were, to say the least, breathtaking.

Dien Bien Phu is 211km west of SaPa so I knew I had to step hard on the gas to make it before sunset. I thought it was all going to be a piece of cake as the first 100km out of SaPa the road was pure heaven! Those 50km over the pass and down again were definitely a trip highlight.

However it was not all heaven. A nice stretch of hell lay ahead, but I made it to Dien Bien Phu in time for sundowners.

Fishing the Vinh Cua Dai, a tributary of the Thu Bon River

The final 50km of today’s 380km run took me through Phong Nha-Ke Bang National Park, definitely a trip highlight. The most awesome jungle I’ve seen anywhere, and at the top of one pass I came across a view that has to rate as probably one of the most beautiful views I’ve ever, ever seen. Rolling away to the horizon was a jungle landscape that prompted me to think of that first line in the Bible… “In the Beginning, God created the earth”… I stopped and absorbed the scene until it was almost dark. The jungle sounds, the surrounding stillness, I will never forget.

I’ve had enough! Fifty days has been great. But it’s now Day 51, and yes I’ve had enough. I wanted to get home today just 400km or so to Saigon but the road stopped me.

What I find amazing about the roads in this country, is how they can go from the sublime to the absolute ridiculous in literally one blind bend. A wide two lane beautiful stretch of French built tarmac, with even cambers and not a blemish on its surface, suddenly disintegrates into a narrow, muddy, potholed and boulder strewn track. This has been the pattern throughout my trip — with notably more potholes than smooth tarmac. In the last couple of days I’ve dodged enough potholes, pedestrians, tractors, buses, trucks, minivans, chickens, pigs and dogs to last me a lifetime. I think the last straw was a heart stopper moment of total panic as it was starting to get dark and my nerves were already frayed….

…as I’m riding a flat but bumpy stretch of road I look over my right shoulder to where my camera bag was supposed to be, and to my absolute horror it’s not there…

I’ve had a very careful bike loading regimen since day one. That is making sure I don’t lose anything off the back of my bike, due to aforementioned potholes and other obstacles. But today as I’m riding a flat but bumpy stretch of road I look over my right shoulder to where my camera bag was supposed to be, and to my absolute horror it’s not there….OH JESUS FUCKING HELL! I felt a heart attack coming on!

Without checking oncoming traffic I immediately swing around 180 degrees thinking I have literally seconds to race off back down the road to find my fallen bag before someone lifts it. And how far back has it been since it fell off? My mouth is as dry as a bone…. my heart racing…blue bag still in place albeit shifted a little. But camera bag has gone and with it all my equipment — cameras, lenses, everything. In Vietnam misplaced things don’t stay in any one place for more than a blink of an eye.

As I tore off back down the road, I heard a shout from street side and a gesture to the back end of my bike. I leaned right out and had a good look behind…and there swinging down over the back wheel but not touching the road was the camera bag, hanging precariously on to my bike by one bungy cord. Oh bloody ‘ell it’s time to wrap this trip.

Another puncture, shattered nerves and a thunderstorm that almost washed away the approach road to Saigon but I’ve made it. Home at last.