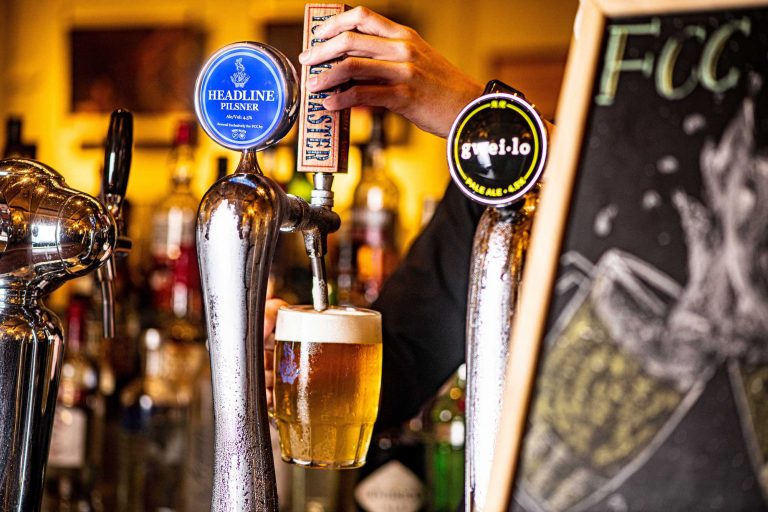 Amid the many challenges the club faced last year, one stood out: Choosing the FCC’s new signature beer, Headline Pilsner. Richard Macauley, who was instrumental in bringing the beer to life, spills the story.

A pint of Headline Pilsner being poured at the FCC’s Main Bar.

Beer is the single-most popular drink at the FCC’s Main Bar – which sold upwards of 4,000 draughts and bottles a month pre-pandemic – so it felt only natural to introduce an exclusive FCC beer. Early last year, the F&B Committee set to work, pouring ourselves into Hong Kong’s craft brew scene to find the perfect beer for FCC members.

We quickly identified its ideal brewing partner: Young Master Brewery. Founded in 2013, Young Master is one of Hong Kong’s most successful craft breweries, standing out from the pack with its creativity, consistency and commitment to the city.

We knew the FCC’s signature beer had to be refreshing, flavourful and versatile, plus pair well with the club’s food. And as tempting as it was to experiment with more avant-garde brews, we ultimately selected a beer that would speak to the majority of FCC members.

After tasting dozens of beers, we narrowed it down to a pale ale or a Pilsner, essentially a classic Czech style of pale lager. During one of the tasting sessions, Young Master introduced us to a contemporary take on a Pilsner that ticked all of our boxes: a bold yet approachable flavour, crisp and clean finish, mild and tangy hops, and an all-weather quality that stands up in winter and summer.

As a final touch, we needed a catchy name fitting of a correspondents’ club. Enter Headline Pilsner – a beer so good, you’ll never need to read the full beer menu again. Since its launch, Headline has been one of the club’s top-selling draught beers, which is a testament to its easy-drinking style and compatibility with everything from spicy Indian curries to salads, Asian noodles or simply some peanuts and crisps.

If you haven’t tried a pint of Headline yet, there’s plenty of time to change that. Next time you’re at the Club, sip a draught with your favourite meal or just savour it solo. And take pleasure, if you like, that you’ll not only enjoy a great pint but that you’ll also be supporting one of Hong Kong’s best young businesses.