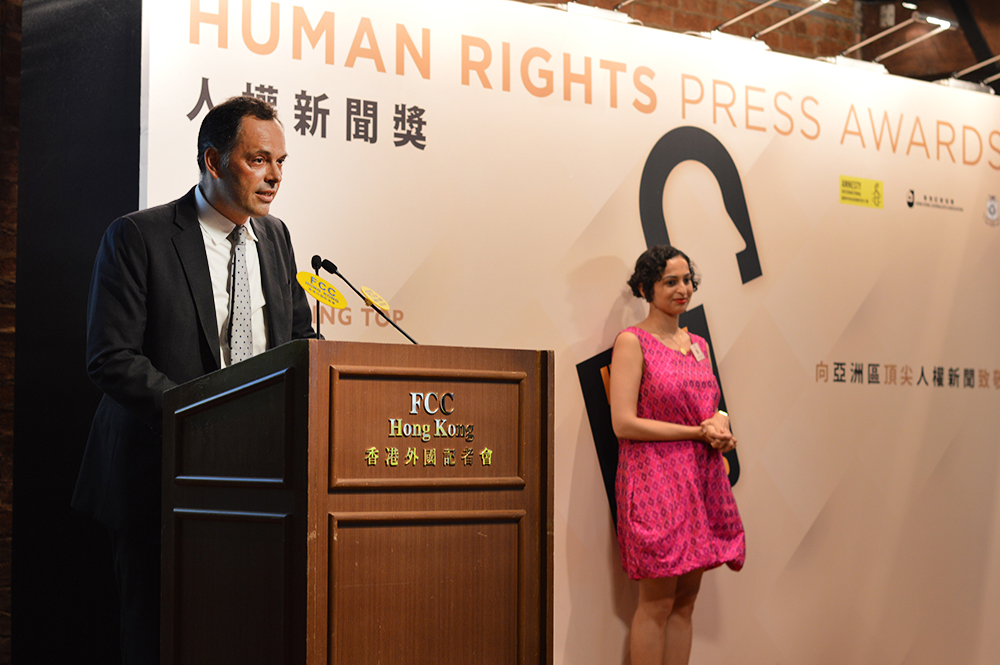 The Human Rights Press Awards are run by the FCC, Amnesty International Hong Kong, and the Hong Kong Journalists Association. Now in its 23rd year, HRPA presents 52 awards recognising outstanding journalism in the area of human rights across Asia. This year saw a record 468 entries,13 per cent up on last year. A total of 182 entries were submitted in Chinese-language, and 286 in English. The awards ceremony was held at the club on the evening of May 16. Reporting by Sue Brattle & Vicky Kung.

The Correspondent spoke to some of the winners about their work, and what winning a Human Rights Press Award means to them:

Emily Feng of the Financial Times won a Merit for Forced Labour in Xinjiang.

“I’m honoured and humbled to have received this kind of recognition for my work on Xinjiang, especially since reporting on this topic has been a hard, uphill slog in difficult reporting conditions. This investigation in particular came about as I began questioning the claims made by Chinese state bodies regarding ongoing detentions of Uighur Muslims. Since then, many other talented journalists have followed suit, producing an astonishing body of investigative journalism that collectively has contributed greatly to our understanding of the contours of this state campaign.”

“This is a first-ever award, so much appreciation to all of you. We were the only journalists who reached the scene of this incident. It’s very important for journalists to have access to places where stories are born. For a country like ours, most journalists and media outlets have many more barriers than other countries. The first barrier is the financial status of media outlets. Another is aggressive authorities, like the Burmese military, and outdated laws, such as the Unlawful Associations Act. There are a lot of human rights violations to be uncovered and discussed in-depth in Myanmar. Journalists in Myanmar, whether citizen or foreigner, are struggling. Please keep supporting journalism in Myanmar so that it can continue to survive.”

Supriya Chhetri, Gianna Aquino, Janina Rika and Karrie Lam of MSS Messenger, Marymount Secondary School, won a Merit for Periods: Addressing a Taboo and a Need of the Underprivileged. Teacher Kitty Leung said: “Students chose the topic of their article as part of their response to the theme of Female Empowerment which was the focus of the first issue of the school magazine last year. There are not a lot of awards around that acknowledge students’ work on reporting at secondary level so it is encouraging to receive the award and an honour to be listed with top professionals in the field. I hope students will be inspired to continue writing about issues that touch on human rights.”

The Investigative Section of Apple Daily Hong Kong won a Merit for Series: Scandal of the Shatin to Central Link. In May 2018 reporter Anthony Leung began an investigation into construction scandals involving holes in concrete slabs at the Shatin-Central MTR link after receiving tip-offs from the public. He said: “When we first approached the MTR with evidence-supported questions regarding these problems, it denied there were holes, and accused us back. Later reportage revealed that the Hong Kong Convention and Exhibition Centre station has missing supporting structure and the Hung Hom station had its design altered without proper approval. Such safety problems point to loopholes in the monitoring and governance structure within giant companies in Hong Kong, like MTR. The way things are managed and checked is falling apart. We finished this investigation because citizens gave us evidence. We want them to continue doing so.”

won for Half a Century of Heavy Metal Pollution Gives Villagers Deformed Limbs. Four students from CUKH’s Journalism School went to Changtun, Guangxi, to report on heavy metal poisoning from a mine that has left people with blistered joints and severe disability, and their crops die. Kathy Shen Qing, who did a follow-up story, said: “The mining started in the 1950s and farmers started to notice deformities about 30 years ago. We found this case through an NGO. People often don’t have many channels to communicate their needs, especially when they don’t receive enough help from the government. Some get harassed because the authorities don’t want them to complain. But we in Hong Kong have freedom of speech and we have a responsibility to speak up for the voiceless there.”

Carson Qin Kuan of Initium Media won for Lawyers Dealing with Poisonous Milk Powder and Problematic Vaccines, What Are They Up To? He said: “It has been 10 years since the press covered poisonous milk powder and problematic vaccines on mainland China. Stories like this keep happening. The press covers it, people notice it for a while, then the victims get forgotten. Bringing up old incidents that are not solved forces people to think about the systemic problems that lie behind these cycles. It’s best to talk with human rights lawyers if you want to capture the root of problems. I am happy and surprised that my article was given an award because vaccine is an old topic. I am grateful that the award acknowledges the need to focus not just on the hot topics but also remember marginalised people who are forgotten.”

You can follow the Human Rights Press Awards at www.facebook.com/HumanRightsPA/

Keynote speaker Maria Ressa of Rappler: ‘We need to hold the line and show the best of human nature’

Maria Ressa, co-founder and CEO of the Philippines-based news website, Rappler, was free on bail after her second arrest this year when she spoke at the awards ceremony. “Your reporting matters. Now more than ever. We need to hold the line and show the best of human nature. That is our hope for the future,” she told an audience that knew only too well what she meant. 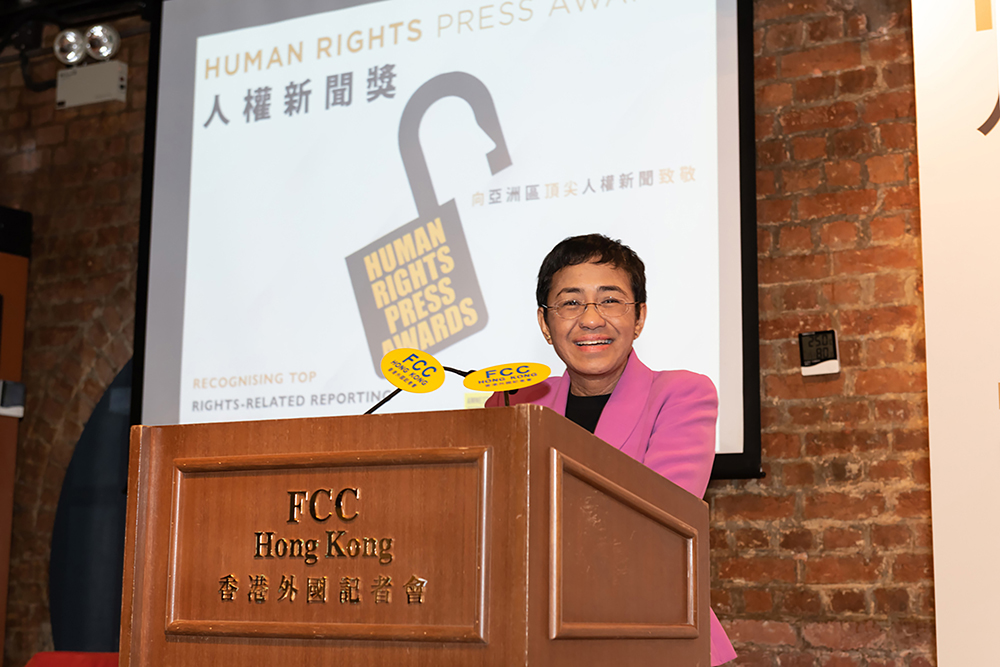 Reuters reporters Wa Lone and Kyaw Soe Oo, freed from jail just a week before the ceremony, won the award for Best Investigative Feature Writing along with colleagues. They had spent 511 days behind bars for allegedly exposing “state secrets” in the course of reporting Myanmar Burning, a damning investigation into the massacre of 10 Rohingya men and boys by security forces and armed Buddhist civilians.

Even though they were not at the ceremony, the spirit of their work and sacrifice was. Ressa said: “Even though it is difficult to work as a journalist now, there is no better time to be a journalist, because it matters.”

FCC President Florence de Changy, introducing Ressa, said: “As Asia is experiencing less freedoms all round, and several governments do not uphold human rights, the reporting of human rights abuses is all the more important.”