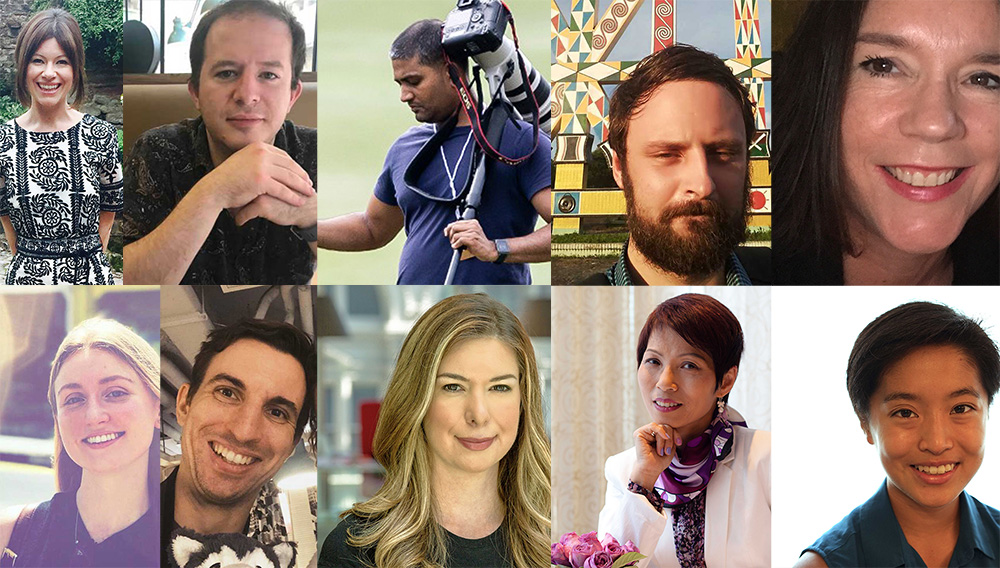 The latest group of members to join the FCC is, as always, an interesting bunch. The membership committee meets regularly to go through applications and is always impressed by the diversity of people who want to join the Club.

I was born and raised in Taiwan, lived and studied in Sydney. As an international school teacher, I’ve had the privilege to live and work in several different countries. Besides Taiwan, I also call Australia and Turkey home, as I have lived and taught in these two amazing countries. I have been living in Hong Kong for 12 years (was planning to be here for two). Lots of life-changing events have happened during that time. I met my American husband, Ryan, and now we are raising our three-year-old daughter. I enjoy hiking, travelling, planning events, cooking and reading.

I’m a freelance journalist and writer in this wonderful-but-flawed city that I’ve called home my entire life, minus a few years away for college and a seven-month stint last year at the Washington Post in D.C. I’m an avid trail runner and am training to compete in a couple of 50-kilometre trail races this season. If I’m not too tired from all the miles of running up and down mountains, I also like to go climbing and bouldering.

If I was an animal, I would not choose to be a butterfly, because that would be derivative. These are the kind of terrible and obscure finance jokes you can expect when you meet me at the FCC. I’ve recently moved to Hong Kong to be Head of the Asia News Desk at Bloomberg. In addition to Bloomberg, I’ve worked at the Financial Times, with experience in New York, London, and Abu Dhabi, where I was previously based. I also anchor on TV and co-host a weekly podcast, Odd Lots, where we talk about poker, algorithmic trading and forensic accounting – in addition to butterfly option strategies.

My name is Paul-Alexandre Michel Albert Bourieau, but they call me POLO. I am French, my son Italian, my wife English and my grandfather was a Spanish refugee. And I am a sculptor here in Hong Kong. I arrived in Hong Kong almost by mistake in 2003. I fell in love with this city “in between two worlds” which inspires me greatly in terms of identity crisis in the new millennium. Since then, I have been creating site-specific works for the new “agora” of the 21st century.

It is an honour to be a member of this wonderful institution. I was born in London, grew up in Tokyo and studied in Edinburgh. I then worked as a teacher in Kobe before beginning my career in shipbroking with Arrow in London, and I’ve now been in Hong Kong since 2015. I love this city. In a day I can cover all of my passions – eating my bodyweight in dim sum at Maxims, hiking up Mt High West to watch the container ships pass and then heading to the bar at the FCC!

After a stint working as a social scientist in Wellington, New Zealand, I left my life at home to study for a masters of journalism at Columbia University in New York. This led to adventures like reporting from the streets of the Bronx, trading on the American stock exchange, having dinner with Walter Cronkite, interviewing a eunuch in the slums of Mumbai and covering 9/11 for CNN.com in Hong Kong. I now teach at HKU’s journalism school. I also write for the Economist Group, Thomson Reuters Foundation and the South China Morning Post, judge the annual SOPA awards, and am a mother of three kids very interested in pushing the green agenda.

I am the Danish CEO of ship management company Anglo-Eastern Univan Group. We have more than 600 vessels under full technical management, another 200+ under crew management, and have project managed the building of 450 new ships. I am married to Brenda, a “Hong Kong girl”, and have lived here close to 20 years. Together with our Labrador Retriever, we are avid hikers and Hong Kong is a superb home in this respect. I’ve also climbed Mount Kota Kinabalu and Mount Kilimanjaro, the highest peaks in South East Asia and Africa respectively. Apart from that, my favourite pastime is sailing.

My name is Alberto Aliverti and I am originally from Como, Italy. I arrived in Hong Kong in 1982, coming from the United States. After assimilating the culture and business climate, I started my own company. Initially I was importing fabrics, fashion accessories and textile chemicals from Italy, but I also acted as a textile consultant for an Italian Government institution. My fondest memories were being able to travel to unspoiled places in China, especially areas closed to foreigners at the time. I still remember 20 days of negotiations in Hubei, lodging in the summer residence of Mao Tse Tung. Being the dead of winter, there was no heating, and my 1000 sq ft bedroom always remained a cool 2-3C.

Hello! I moved here in April to work at Agence France-Presse, where I continue to distinguish myself as the tallest person in the office. Before that my partner and I lived in Yangon, where my commanding height was the object of much ridicule. When I wasn’t being chased down the streets by rampaging gaggles of selfie-hungry Burmese teens, I worked for the news magazine Frontier Myanmar. I started my time in Asia at the Phnom Penh Post (RIP), where one of my articles got pulled because I compared the Cambodian information minister’s sartorial tastes to those of Breaking Bad’s Saul Goodman.

I’m a cross-asset markets reporter for Bloomberg News, which I joined earlier this year after a four-year stint at The Wall Street Journal and another three years spent in Abu Dhabi covering Middle Eastern banking and finance for The National. I passed the CFA Level 2 exam this summer and will soon curtail my social life to prepare for the next one, so as to not bore people by gabbing away excessively about exotic derivatives. I’m also a marathon runner, a computer programmer, and am often found near fellow FCC member Babette Radclyffe-Thomas (pictured).

Hello. I was born in the UK and have been living in Asia since 2002. I moved to Hong Kong in 2007 and I manage a company focused on raising money for various local and international charities using TV advertising – in Hong Kong, Korea, India, Australia, and New Zealand mostly. I met my wife in Hong Kong on Boxing Day 2009 and we married in October 2010. Claire’s parents are from Hong Kong, but she was born and raised by them in Germany so our two daughters are growing up speaking and hilariously mixing up German, English, and Chinese.

I’m an American reporter for TIME based in Hong Kong. I fell in love with the city’s trails and transience two years ago and have lived here ever since. At TIME, I cover everything from politics to culture across the Asia-Pacific, but my favourite stories are the ones with a good adventure. Some of the best include chasing Everest climbers in Nepal, cheese-hunting in the Alps, and droving in the Australian Outback. Let’s swap tales over Moscow Mules at the bar sometime.

I am Deputy Head of Radio Development and the Culture and Education Unit of RTHK, and a consultant in the arts at Hang Seng University of Hong Kong. I hold a PhD in Japanese Studies from the School of Modern Languages and Cultures at HKU and graduated with an MA in communication and MSoc in Media Management from HK Baptist University.  I am a guest lecturer at universities in Bangkok, Beijing, Chengdu, Hong Kong, and Japan. I am also an accomplished Japanese botanic artist and my work has been exhibited in the U.S., Japan, and Hong Kong.

I feel lucky as a journalist, currently News Stream Producer at CNN International, to have front row seats to the first draft of history – whether that is reporting on the inaugural cycling ‘Tour de Timor’ as a celebration of what was then the newest country in the world, witnessing protests in Turkey and Syrian refugee resettlement into Lebanon, or violence on the Jordan-Iraq border. I’ve recently returned to the city of my birth, Hong Kong, at a time when technology and tyrannical leadership have become new frontlines. People are a real passion of mine, specifically developing female athletes in Ultimate Frisbee. The sport will one day be in the Olympics.

As managing editor of Hong Kong Living, I oversee print titles including Southside & The Peak, Sai Kung, Mid-levels and Expat Parent magazines as well as content for hongkongliving.com. Originally from the UK, this is the second time I’ve lived in Hong Kong. My (now) husband and I lived here in 2014. We returned to Hong Kong a year ago, after living in Vietnam (too wet) and Singapore (too hot). We now live in Southside with our adopted cat. As an ex-Portobello Road, London, market stallholder, I love a good deal. I also like to start my days early with a hot yoga session and end them with the occasional glass of champagne.

I’m a photo editor for the New York Times and photographer for AFP. In previous lives I’ve been Chief Photographer, Indian Subcontinent and Staff Photographer, Singapore for Reuters; Before that, I was a staffer at AAP in Sydney. Before that, I was actually a night shift taxi driver for two years while I was getting my career as a photographer off the blocks in Australia. So if you’re looking for a raging debate on the state of modern photojournalism, or pointers on how to fix a Ford Falcon’s radiator hose – come find me at the bar.