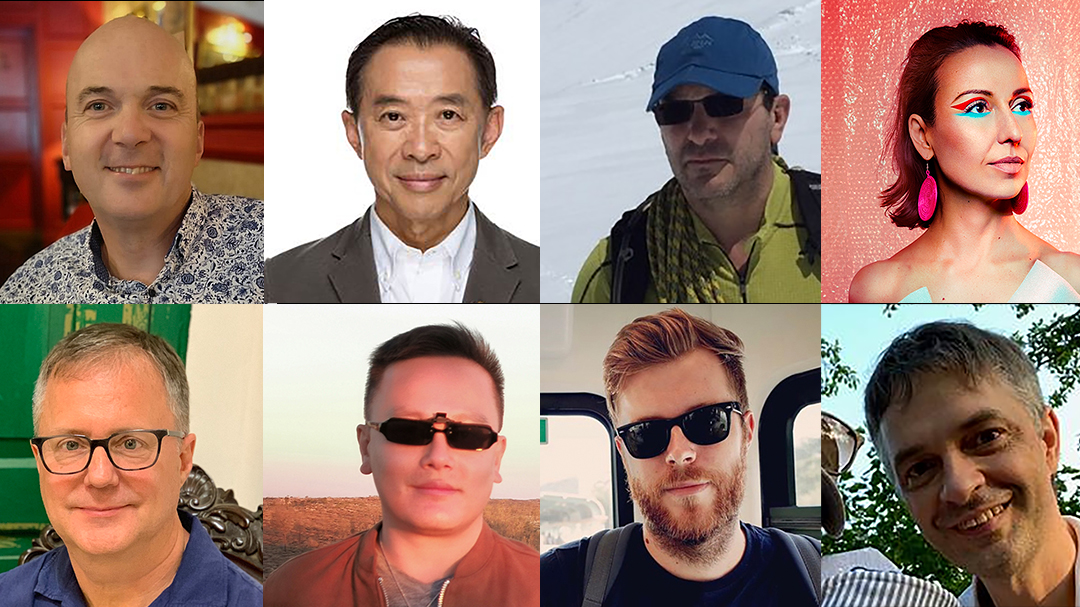 The latest group of members to join the FCC is, as always, an interesting bunch. The Membership Committee meets regularly to go through applications and is always impressed by the diversity of people who want to join the Club.

I’m an editor at Bloomberg News, focused on explanatory journalism. I grew up in Philadelphia but soon began moving around the U.S., eventually landing in New York with the Associated Press before heading in 1996 to Berlin, then to Brussels. Around that time I made my first trip to China, finishing after a couple weeks touring in Hong Kong. I switched in 2005 to The
International Herald Tribune/New York Times in Paris (and briefly Hong Kong again). I came back with The Wall Street
Journal en route to Jakarta in 2016. This is my first time living here with an actual HKID (and FCC membership card). I like to explore new hiking trails, art exhibits and remote islands.

I was born in Yokohama, Japan, of Chinese parents. I studied Chemical Engineering at the University of Southern California, and a graduate degree in Manufacturing Engineering. I started my career with Chevron and worked in Japan and the United States. I was transferred to this never-sleeping, exciting, and glamorous city in 1993. I loved Hong Kong so much that I refused to be transferred until I took early retirement from Chevron in 2010 to pursue my long-time dream to become a photographer and an inventor. I held three photo exhibitions in 2018 and am planning another. I obtained two worldwide patents related to hand-washing devices and mixing bottles and just filed my third patent for a reusable drinking bottle. My wife Natsuko and I are thrilled to join the FCC.

I’m the trailing spouse. Formally the professor of politics at Queen Mary University of London, I’m in Hong Kong because my wife landed a great job as Group Chief Communications Officer for the Hong Kong Stock Exchange. While here I’m doing some freelance writing, mostly on British politics, for The Times, Daily Mail, Prospect, Spectator, and London Evening Standard, amongst others. Having never lived outside the UK, this seemed a good time to try it – with the prospect of escaping Brexit thrown in as a bonus. In practice Brexit has followed us and I’ve already found myself giving talks on the subject.

After a few years stumbling from one profession to another I decided to go back to school and study to become a journalist. So far, so good, and after a short stint working as a freelance sports reporter in London, I found my way to finance. I now cover Asia’s financial markets as the managing editor of hedge fund-focused publication, AsiaHedge. A far cry from my undergraduate studies in Archaeology. When I’m not propping up the Main Bar or shooting pool at Bert’s, I’m usually at the beach. I’m always on the lookout for someone new to beat me at golf and I can make up the numbers at football.

Born into a diplomatic family, geographic diversity has always been a constant. Sometimes I am South African, sometimes Portuguese, depending on the sports team or the topic. I studied filmmaking and art in Lisbon and London before moving to Asia in 2006. I went to Phnom Penh to make a documentary for two weeks and ended up staying four years, followed by Macau and now Hong Kong. More recently sustainability has become my focus, in particular fashion and eco-anxiety, and in 2017 I helped found Circular Community HK. I’m launching a creative company to better communicate climate change. Travel is important and recent destinations include DRC, Rwanda, Uganda and Botswana. Every year I head to Nevada for Burning Man.

I work as Chief Operating Officer for IronBirch Capital in hedge fund operations and Hong Kong has been my home since 2008. My wife is an indigenous resident of Lamma Island and we enjoy travel and adventure. We have explored Champagne’s wine caves, floated by hot-air balloon above Tanzania’s great wildebeest migration and walked on a glacier in New Zealand. I climbed Kilimanjaro and ran a midnight-sun marathon within the Arctic Circle in Norway. We were lucky enough to see people voting in Burma’s 2012 historic by-elections, dolphins and whales swimming in Auckland harbour, and to walk with cheetahs in Namibia. And now we’ve embarked on the greatest adventure of all – parenthood! We’re excited to become members at FCC and look forward to many more new adventures.

Born and educated in NZ, I moved as a teenager to Australia, where mum discovered to her disappointment that a Penal Colony was not a male nudist camp, and us kids swapped our traditional “Three Rs” education – reading, writing and rugby – with the more useful life skills of gambling, brawling and general chicanery. Shortly thereafter I discovered the good book; not the Bible but Lonely Planet’s South East Asia on a Shoestring which I used religiously throughout the late 80s and early 90s as I backpacked across the region. Fast forward some career changes and a few wives and I moved to HKG in early 2000. During the past 18 years I have lived and worked in Seoul, Tokyo, Singapore and Shanghai but always coming back, like a missing sock in a clothes dryer, to my adopted home of Hong Kong where I am executive managing director, Asia, for Brookfield Global Integrated Solutions.

My name is Phil Krichilsky – father, climber, business turnaround lackey. I was born in New Jersey, U.S., own a home in Wyoming (a place with more bears and sheep than people), served in the U.S. Army Infantry for eight years, and have run troubled and challenged businesses for over 20 years. I rock and ice climb all over the world and tell grossly exaggerated stories about my skills on the high ground. For the better part of the past 12 years I have lived in Hong Kong, Shanghai, and Beijing, and, as a result, I speak truly awful Mandarin that supplanted the poor French I spoke before. Education wise, I studied engineering at West Point, business at Central Michigan and, please forgive me, government at Harvard. Beyond that, I live alone in Wan Chai surrounded by honking horns and a loud market and am president of Innovative Directions.

I came to Hong Kong in April 2016 to set up the Asia-Pacific editorial desk of Airfinance Journal, a trade publication under Euromoney covering the aircraft financing and leasing sector. I’m now the Editor of Business Traveller Asia-Pacific, whose target readers are frequent business travellers. I’ve been specialising in aviation journalism for more than five years and have been privileged to witness the growth of Asia’s aviation sector with a front row seat. Before coming to Hong Kong, I was with Euromoney in London. I received a Masters degree in Newspaper Journalism from City University in 2014.

When I was five years old, I moved to Hong Kong with my mother and five sisters. Despite working several jobs as a child to support my family, I was grateful to grow up in the prosperity of Hong Kong. I started my first business, an oil and gas company in Canada, and partnered with Caterpillar, Husky Energy, and Chinese companies like CNOOC, Sinopec, and PetroChina to further the development of the oil and gas industry in China. Later, I branched out into real estate, art collection, book publishing, and philanthropy. Today, my charitable foundation has provided financial support to over 800 schools across China, and my focus remains on giving back to the community.

I’m a social entrepreneur devoted to revolutionising financial services for foreign domestic helpers, a scandalously under-appreciated demographic that deserves better. Head of relationships at fintech startup Good Financial and relishing the journey! Edinburgh born and bred and coming up to my sixth year in Hong Kong. Away from my work I’m a huge sports fan (rugby and golf especially), Bruce Springsteen diehard and lover of all types of whisky. I’m a keen student of innovation and invention in business, sport and other areas of life. I’m thrilled to join FCC, a venue I’ve always loved visiting and where you’d always meet amazingly colourful and quirky characters. If you see me at the bar, join me for a dram! Slàinte Mhath.

I’m Director of Regulatory Affairs and Policy for Prudential Hong Kong and also a former international banker who was fortunate to work in five Asian markets across different roles over the past two decades. I’m a HK native and always believe this is the best place in the world. I love lots of travelling with my wife and closest friends during my free time, enjoy fine dining, wine appreciation and am obsessed with analysing local markets and international insights. I also enjoy discussions of conspiracy theories and ancient civilizations. n