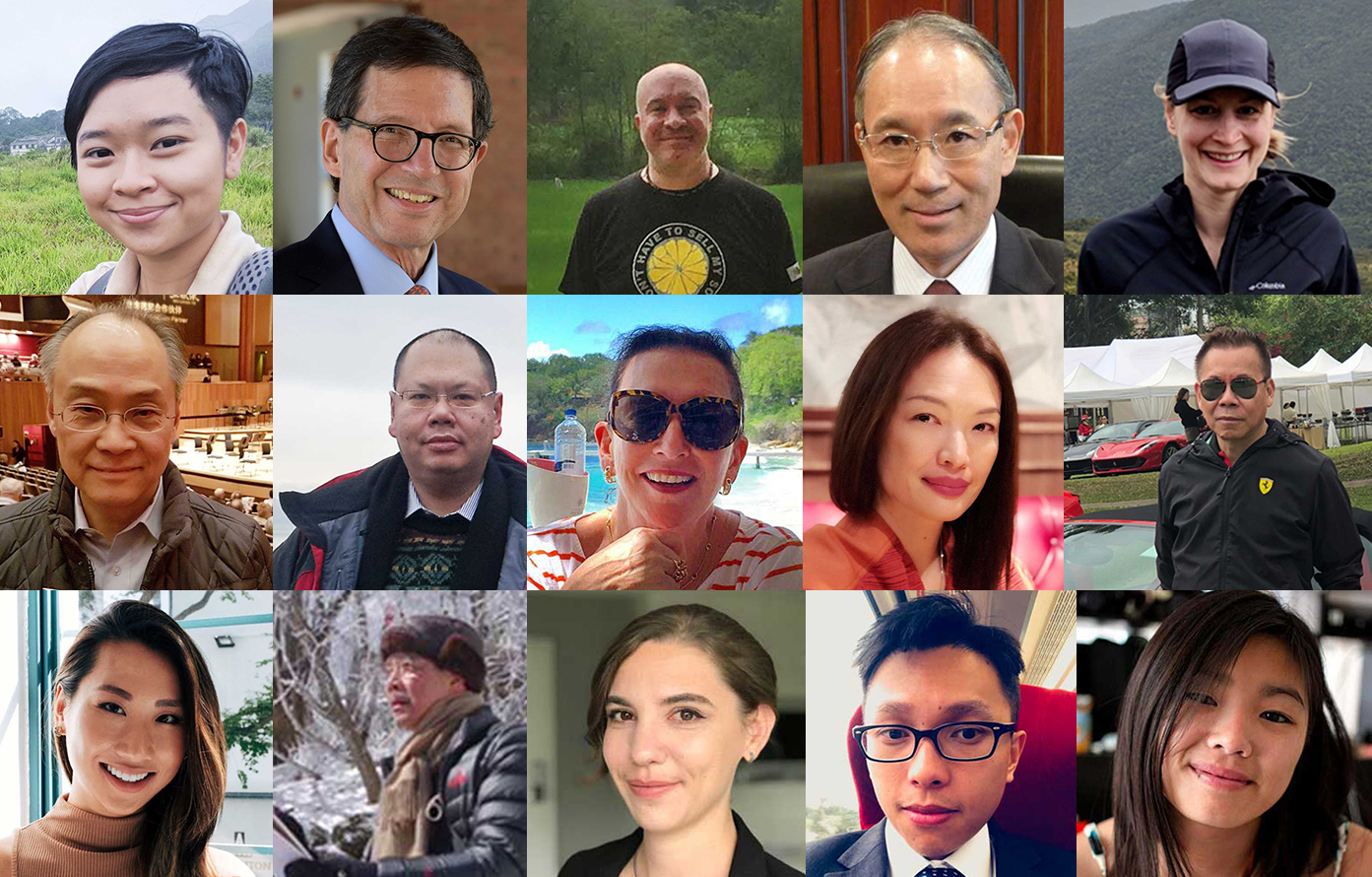 The latest group of members to join the FCC is, as always, an interesting bunch. The membership committee meets regularly to go through applications and is always impressed by the diversity of people who want to join the Club.

A genuine jack of all trades, I have built a career in advertising, marketing and general management across several industries, including consumer finance, healthcare, pharmaceuticals and agriculture. From humble beginnings as a student of philosophy and relief announcer for RTHK Radio 4, I progressed to become “king of napkins” as Asian head of women’s sanitary protection for a US multinational. I’ve come down to earth of late, managing, among other things, vineyards with total area equivalent to 80% of Hong Kong Island. In the last few years I have also been a concert reviewer for the website Bachtrack (www.bachtrack.com). My peripatetic occupation has taken me to concerts by famous orchestras at equally renowned concert halls around the world.

I like to tell people that I moved to Hong Kong a few days after the US elections in 2016. My intention wasn’t to escape Trump’s America, but the timing just worked out that way. This is the second time around these parts for me, having worked as a reporter at the Wall Street Journal covering Hong Kong real estate from 2010 to 2011. In between, I was in San Francisco, reporting on technology before joining the Fast Company and then Quartz, where I still work. I’m a ham radio operator (licensed by the other FCC, the Federal Communications Commission), student of Morse, SCUBA enthusiast, and avid boat watcher.

Made in HK, an ordinary Chinese girl, we migrated to Sweden when I was 10 as my parents wanted a better life and future. Equipped with Cantonese and English as my mother tongue, I learned Swedish and French, the former for mere survival and the latter for pure pleasure so by the time I had finished my studies, I embarked onto the school of life ready to communicate and connect with all sorts of walks of life. Having slipped onto a banana skin into the world of luxury retail and worked for more than 20 years for several leading European brands where my passion for art, entrepreneurship and team building flourished, I have recently added a new skill, Bio-resonance (complementary healthcare to traditional medicine), onto my profile. So, FCC is the obvious choice, a club where you can relax, meet, eat, aspire and be inspired. Thank you for welcoming me as a new member!

I was born and brought up in Hong Kong and remember visiting the FCC as a child when it was in the Hilton at the bottom of Garden Road. My father, a past president, and brother are both journalists and absent members. I followed a different path and studied medicine. I practised for many years, including in Hong Kong several times, before moving into research and development for the biotechnology industry. I moved back to Hong Kong, for the 8th time, last year. I have 3 adult children, 2 labradors, I ski, and have taken up sailing again recently. I am involved in a number of women’s leadership initiatives and charities to support women and children’s access to education and health. I am looking forward to contributing to the FCC.

I began as a university professor, teaching mainly at Stanford, and then became a foreign policy analyst at the Brookings Institution in Washington. I’ve been a university administrator, holding two deanships. Now I’m a university professor again, most recently at the Hong Kong University of Science and Technology and the University of Hong Kong. The common denominator in all this is my interest in China and U.S.-China relations. I’ve never been a journalist, but I’ve been a source for some and have admired the work of even more.

I was born in Hong Kong in the early days of the Baby Boomer period. I received my education in Hong Kong and then started my career in the “rag” trade in the 1970s and am still working in the same field now. I started my own business, Union Apparel International, 20 years ago and have customers from all over the world, which has opened my eyes a lot. I have travelled quite a bit for work and play to different places. However, I believe there’s no place like home – Hong Kong!

I am currently at Reuters Breakingviews as the Asia Editorial Assistant. Before choosing to pursue my (relatively short!) career in journalism, I worked for Mirae Asset in product development and marketing, as well as HSBC Private Bank. I’ve also had a brief stint working in the startup space and Forbes Asia. I graduated from Tufts University with a bachelor’s in international relations and political science, where I wrote for The Tufts Daily and edited for Hemispheres, an international relations journal. I’ve lived in Vancouver, Boston, and Madrid, but ultimately consider Hong Kong to be my home.

When I was a child, I dreamt of being an anchorman. Time flies and as it turned out I entered the Ministry of Foreign Affairs and started my career. I was dispatched to work in America twice, Russia twice, Israel once, and had the experience of serving as a Specialist in the Soviet Union for Japan. Thus, I was given an opportunity to further improve my language proficiency in English and Russian. However, as both my grandfather and father were experts in China studies, I wondered if I could work in any areas of China. Since then, my dream has come true and I have been working as Ambassador and Consul-General of Japan in Hong Kong since 2015.

I am an Online News Reporter at The Standard, covering local and business news. Prior to becoming a journalist, I was a private tutor. I have been a full-time reporter since January 2017, following an editorial internship at the Financial Times in Hong Kong. Outside of reporting, I love history, yoga, running, tennis and travelling. I also play and write music, was the lead singer in a rock band and have performed solo at open mic nights. Born in London and raised in Hong Kong, I graduated with a physics degree from The University of Manchester.

I’ve been creating art and painting with Chinese ink for almost 60 years. From being a student, to becoming a professional artist, from sketching, to 30 years of Christies’s auctions, I have seen how “creations” have inspired others and that “change” allows me to to keep artistic interests fresh among those who appreciate my art. I have created various series of artworks; my signature Fishing Boat series of Hong Kong; Colours of Canada during my 20-odd years in Ontario; Elegant Landscapes of mainland China and the latest Dawning of Hope series. At the turn of the century, I decided to reconnect with my roots in Hong Kong. I spend my time in Zizai Xian, my studio in Lan Kwei Fong, with my wife Brenda, or chatting with friends in Luk Yu Chinese Tea House, or having coffee in FCC, leading a retired yet working daily life as any 70 year-old man should. My philosophy: Art is for possessing, creation is for appreciating.

I was born and bred in Hong Kong but have been away in the United Kingdom for a significant period of time for my secondary and tertiary education. I am a solicitor by profession and am admitted as a solicitor in both Hong Kong and England & Wales. For the past 15 years or so, I have been the in-house lawyer for a number of multi-national organisations with either their regional or global headquarters based in Hong Kong. In addition, I am a Rotary Club member as well being an officer of the Hong Kong Air Cadet Corps on a voluntary basis.

I’m a reporter for the New York Times and I’ve been in Hong Kong for eight months. I’m originally from Canada but this isn’t my first time in Asia. As a kid, I spent time in Bangkok, Thailand and as an adult I’ve lived in China (Dalian and Beijing) and Singapore. I guess you could say that I was inspired by my father’s experience in Asia. He was a foreign correspondent here in Hong Kong in the 1950s and 60s covering some of the most exciting moments in this region’s recent history. He was one of the first foreign correspondents into “Red China” in 1954, traveling across the country to chronicle, as he later described it, “the Communist battle for men’s minds.” Ask me about it if you see me in the club.

Just shy of two years ago, I moved to Hong Kong to join TIME, where I was auspiciously tasked with reporting on Southeast Asia. That’s where I had started my career, after all, sub-editing news reported by Burmese journalists exiled to northern Thailand. I moved to Yangon in 2014, not long after censorship was lifted in Myanmar, and since then I’ve written about a dramatic election, a civil war, and a humanitarian crisis. Needless to say, there have been lots of surprises on the path that somehow got me all the way from a cattle ranch in East Texas to a correspondents’ club on Lower Albert Road. I’m still a little stunned myself, but I do love a good plot twist.

I moved to Hong Kong from the UK just under two years ago after working as a digital journalist at the BBC in London and south east England for 16 years. I’d always wanted to live in this magnificent city, so when the South China Morning Post announced its digital expansion plans I knew exactly where I needed to be. When I’m not curating content as part of the Post’s digital team, I love exploring Hong Kong on my classic Vespa scooter, going to gigs and taking photos. I also spend quite a bit of time trying, and generally failing, to get to grips with Cantonese.

I’m an investigative reporter at HK01. I grew up here. Over the past eight years I’ve lived in Paris, Abu Dhabi, and New York. My investigations have led me to corrupt Chinese officials who claim political asylum in the US, Harvey Weinstein’s movie partner in HK, and prominent Buddhist monks who embezzle charitable funds. It is a thrilling job. I’d say my rarest skill is to flip interviewees – having them call back, after hanging up on me the day before. Outside of work, I have a cat and a dog who live in peaceful mutual indifference.