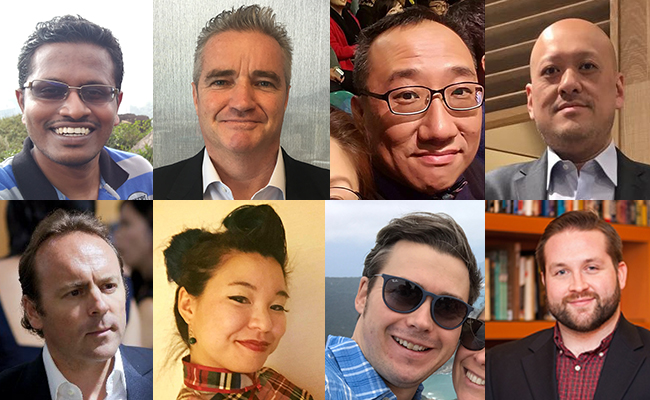 The latest group of members to join the FCC is, as always, an interesting bunch. The membership committee meets regularly to go through the applications and are always impressed by the diversity of the prospective members. As you would expect there’s a healthy mix of Correspondents and Journalists as well as Diplomats and Associates – and all have interesting tales to tell – so if you see a new face at the bar, please make them feel welcome. Below are profiles of just some of the latest ‘intake’.

Jean-Charles Viens: At 25 I established my first company in Hong Kong and for the past 20 years I have witnessed, first as an entrepreneur in import and export and now as an expert in wine communications, the unprecedented growth of the wine industry in Asia. I am deeply passionate about wine and other pleasures of the table and am always looking for quirky and unusual wines. I regularly travel to various wine regions around the world to learn the stories behind the labels. I am a Vinitaly Academy Italian Wine Ambassador and creator of a popular 30-part wine workshop series “How to Taste like a Pro”. When not talking about wine, I am writing about it. As Deputy Editor of Spirito di Vino Asia, a bi-monthly magazine I am dedicated to promoting a Culture & Quality “Wine-Style”. The magazine is widely distributed across Asia.

Ernest Chi: I graduated with a BA degree from the University of Winnipeg, Canada and began my career in journalism when I joined the Hong Kong Economic Journal in 1995 as a financial reporter. In 1999, I moved to Ming Pao, where I was promoted to finance news editor in 2003 before joining its general news desk in 2007.

In April 2011, I formed an investigative news team and soon after, we broke a story on the rigged purchase of Henderson Land’s luxurious residential 39 Conduit Road. Other investigations followed – notably one on voter rigging in 2011 and the following year two ‘illegal basement’ stories. The first led to the leading Chief Executive contender Henry Tang losing the 2012 election while the second report a few months later found an illegal structure in the Peak home of the newly-elected CE, CY Leung. I have often wondered whether the Chief Executive would be a different person if we had broken both stories at the same time.

I left Ming Pao in 2013 and joined HK01 as Executive Chief Editor in charge of the News. The publication was launched with a mission to drive social change, restructure social values and drive media reform. And that’s what I’m trying to do.

Michael Connelly: I have lived in Chicago, Beijing, and New York City before relocating to Hong Kong in May 2016 to assume the role of Editor in Chief at digital magazine Lifestyle Asia. My past experience includes colourful stints roaming the globe as online editor at Fodor’s Travel, reporting on the arts for New York magazine, and interning for the fiction editor of Playboy magazine. A speaker of Mandarin and Spanish, my passions include languages, cooking, 35mm photography, gardening and gin.

Bhavan Jaipragas: I’m the not-so-new Asia Correspondent for the South China Morning Post. I came on board last September, after spending a year at the LSE pursuing a postgraduate degree in politics and communication. I was previously a correspondent for Agence France-Presse in Singapore, my home country. At the Post, I work mainly with the newspaper’s This Week in Asia team and write about the politics, economy and foreign policy of the 10 ASEAN countries. I’m a wannabe polyglot and am ever endeavouring to polish my command of Tamil, my mother tongue, and Malay, my national language. I speak and understand (very) basic Mandarin.

Malcolm Johnston: Originally from Northern Ireland, I arrived in Hong Kong in 1992 for a two-year contract and decided to stay. I am a Chartered Surveyor, specialising in major transport infrastructure projects, and have worked on projects in the UK, China, Hong Kong and the Middle East. I am head of quantity surveying with Arcadis Hong Kong / Macau. Married with two teenage daughters, I am a keen hill walker, whisky taster and novice beer brewer.

Silver Kung, Ph.D: I consider myself a poetic traveller exploring life through space and time. I am a constant and enthusiastic student of world history and hope to travel to every corner of the world.  I have an academic background encompassing engineering, finance and economics and have been working on cross-border and cross-fields projects for the past decade.  I am an active environmentalist doing my best to preserve our planet to help make it a better place for our children.  I was born in Taiwan but have lived in the US and Italy, I am currently based in Hong Kong and active in the Greater China region.

Marian Liu: On a whim, I quit my job with American newspapers to take up my first overseas post with CNN in Hong Kong. As a Chinese American, I hope to bridge the gap between countries and cultures. I cover Asian entertainment with stories about K-pop, J-pop, Canto and Mando pop and Bollywood. I manage the sites and social media for CNNMoney International, Media, Tech, Travel and Entertainment. I will also be teaching multimedia journalism at the Journalism and Media Studies Centre at The University of Hong Kong. Previously, I covered entertainment as an editor, critic and writer for the Sun Sentinel, The Seattle Times, San Jose Mercury News and Source Magazine. I have an Executive MBA from the University of Washington and a Bachelor of Arts in Integrative Biology and Mass Communications from the University of California, Berkeley.

Carlos Tejada: Nora and Carlos Tejada may have downed a few drinks at the FCC before. We are returning members after a smoggy five-year detour through Beijing, where our children learned Chinese and discovered that the line between pets and food can get blurry fast. We have also lived in Kansas, Dallas and New York. Nora, a freelance photographer, is from Towanda, Kansas. Carlos, the Asia business editor for The New York Times, is from southern Arizona. Like so many country people, we prefer life in the big city. We are both graduates of the University of Kansas.

Alex Williams: Now 38, I have spent most of my adult life working in Asia – firstly in Beijing and Shanghai and now more recently living the dream in Wanchai. My early career penning bar and restaurants listings and selling advertising at That’s Beijing transitioned seamlessly into that of a commodities trader. I currently focus on trading large quantities of specialised sand around the world; life’s a beach! As a Brit with an American wife and a couple of ankle biters, we holiday in England and New England, or make the most of short breaks to Japan, Cambodia or Vietnam.

The one piece of the jig-saw that still needs to fall in place is setting up an AC/DC cover band here and thrashing out some foot-stomping tunes!