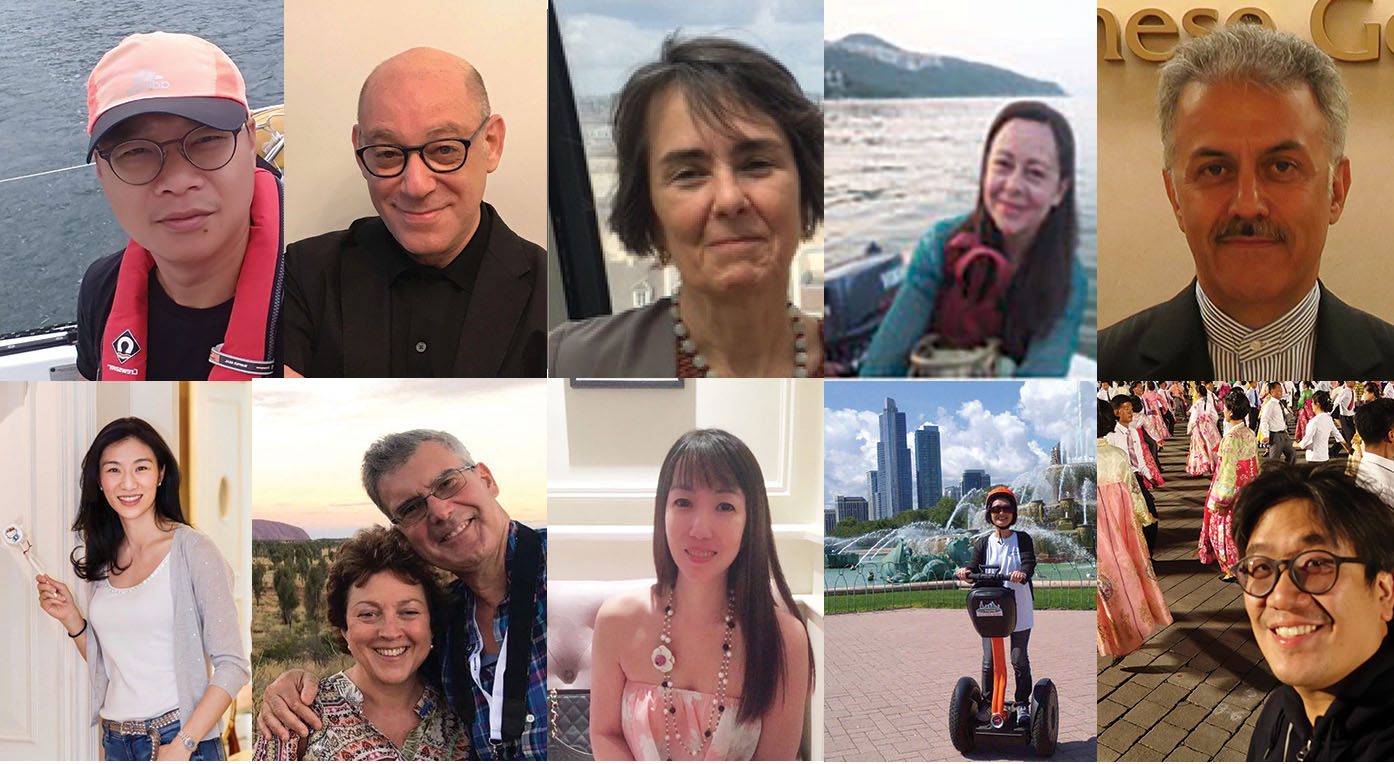 The latest group of members to join the FCC is, as always, an interesting bunch. The membership committee meets regularly to go through the applications and are always impressed by the diversity of the prospective members. As you would expect there’s a healthy mix of Correspondents, Journalists and Associates – and all have interesting tales to tell – so if you see a new face at the bar, please make them feel welcome. Below are profiles of just some of the latest ‘intake’.

Hello. I’m Jon Addis, married to Caroline. Until 2011 I worked for HSBC for 30 years, travelling and living in many countries around the world. Since then I have mainly been resting though I do chair the China Coast Community old people’s home and am a director of a start-up online money transfer business, WorldRemit.

I am currently studying tropical forestry at Bangor University (from a distance).

Hobbies are walking, skiing, golfing and an occasional sail. I also sing with the Hong Kong Welsh Male Voice Choir.  We split our time between Hong Kong and Spain, where we have a house in Andalusia.  I’ve taken part in the FCC quiz for many years and am delighted that I can now buy my own drinks.

I am a US and Hong Kong qualified lawyer. Based in Hong Kong, I have been working for US technology firms listed on the Nasdaq for more than a decade. My work has included expanding and growing business in the Asia Pacific region; spearheading compliance programmes and policies in view of the changing regulatory landscapes; setting up Channel Partner due diligence programmes in 2008 and Dawn Raid Guidelines for China in 2014.

I am also a founding member of  the Asia Council and the primary employment legal lead in both non-contentious and contentious employment issues. I have also received an award from the renowned Legal 500 as one of the 100 China & Hong Kong Most Influential Lawyers in Business in 2017.

I was born in Hong Kong of a Chinese mother and British father and lived here during the 70s and 80s before my family relocated to SE Asia. Hong Kong always felt most like home so I spent a year teaching English in Hangzhou in 1991 before studying Modern Chinese Studies with Russian at university in Britain.

I joined Reuters in 1998 and worked as a correspondent for 12 years, mostly in Asia (including seven years in Beijing) but also in Paris. I then returned to Hong Kong and switched to a career spanning PR and marketing and communications.

I am married with four children (two born in Beijing, two born in Hong Kong). I speak English, and fluent Mandarin and French.

I was born and grew up in Tehran, Iran. I studied political science and international relations in Tehran and Madrid, joining the Ministry of Foreign Affairs in 1980. I married in 1983 and have three children, now in their thirties.

Before Hong Kong, I have been posted in Spain, Mexico, Switzerland, and therefore speak Persian, Spanish, English and French. I love travelling and have travelled to 82 countries. My other hobbies are hiking, running, music and books. I have been lucky to hike most of Hong Kong trails and although they are not as high as Damavand (5678 m) that I climbed once, I enjoyed them a lot because of the different scenery and landscape.

I have written some books and articles on globalisation, international political economy and the world trade system. The next project I am planning to start is on “Cultural diversity and human richness”, based on my experiences in different countries, part of which could also be observed in the FCC and its valuable pool of intellectuals.

I’m a freelance journalist, recently relocated from New York, where I literally fell into a journalism career covering celebrities and the city’s biggest events, from the Met Gala to Game of Thrones premieres. My interviews revealed that David Beckham’s motorcycle riding terrifies his wife, Karl Lagerfeld’s cat, Choupette, loves flying on private jets, Carla Bruni wakes up Sarkozy in the middle of the night to listen to new songs that she’s written, and George Clooney’s space suit in “Gravity” was almost as uncomfortable as his Batsuit. Jared Kushner was furious with me after I broke the story of his budding romance with Ivanka Trump, in 2007.

I moved to Hong Kong with my husband, Shi-Yan Chao, who got a job teaching film at Baptist University. I’m addicted to the New York Times crossword app, and long for weather cool enough for wearing wool.

My career started out in IT support at Credit Suisse in London, but nearly 20 years on, life has taken me far from those lonesome server days. Now married with three young kids in Hong Kong, life is noisy and colourful.

To add to the mayhem, my brother and I are working hard on our own health & beauty start-up. We have always felt health advocacy to be our calling, sparked by my recovery process after sustaining facial injuries in a head-on hit and run accident.

My brother is a qualified general and trauma surgeon, and I in turn attained an internationally recognised diploma in beauty therapy from Switzerland in order to have the necessary qualification and knowledge to establish DAVISAGE. Together, we hope to change the “face” of the future by empowering our customers to take control of their health and beauty. We aim to launch DAVISAGE in a few months’ time, and look forward to sharing exciting news with our FCC family!

I am Dr Yuen Cheuk Wai, an emergency physician. It is my honour to become a member of FCC.

I enjoy the lunch seminars very much. The seminars cover a wide range of subjects which broaden my views and thoughts.

I studied medicine in CUHK and am currently working in a private hospital. My hobbies include tennis and sailing. I look forward to making some new friends in the FCC.

Reading Arabic at Yale took me to the Middle East where I worked in Iran, taught in a village school in Lebanon and worked as a reporter in Lebanon, Syria, Egypt and Yemen. Most of my professional life since has been spent in France where I was a member of the French elite civil service although I am not French, thanks to a pre-Brexit UK passport. Today, besides working for HSBC in Hong Kong, I consult for the IMF and other multilateral institutions on financial market development.

I am proud to have created Clubhouse France, a network of centres to help people with mental illness reclaim their lives and get back to work. I love travelling, cross-country skiing and have toured much of Europe by bicycle.

I came to Hong Kong to understand the world from the Asian vantage point. I am delighted to join the FCC and look forward to meeting its members.

Born in Canada, I spent my teenage years in Hong Kong growing up in a family of newspaper journalists. Naturally I rebelled and ventured into realm of TV and video.

I am currently the Asia-based Coordinating Producer for ABC News (US) and have recently returned to Hong Kong with my family after many years away. I am an alumni of GSIS in Hong Kong and the Medill School of Journalism at Northwestern University in the States.

I started my career at ABC News as an assistant in New York, then worked my way up as a producer for Nightline before moving to Beijing in 2011 to head up the bureau there. I have enjoyed travelling the region on assignment ever since. My wife Stacey Chow and I are thrilled to join the FCC and looking forward to having a drink or two or three with you all at the bar.