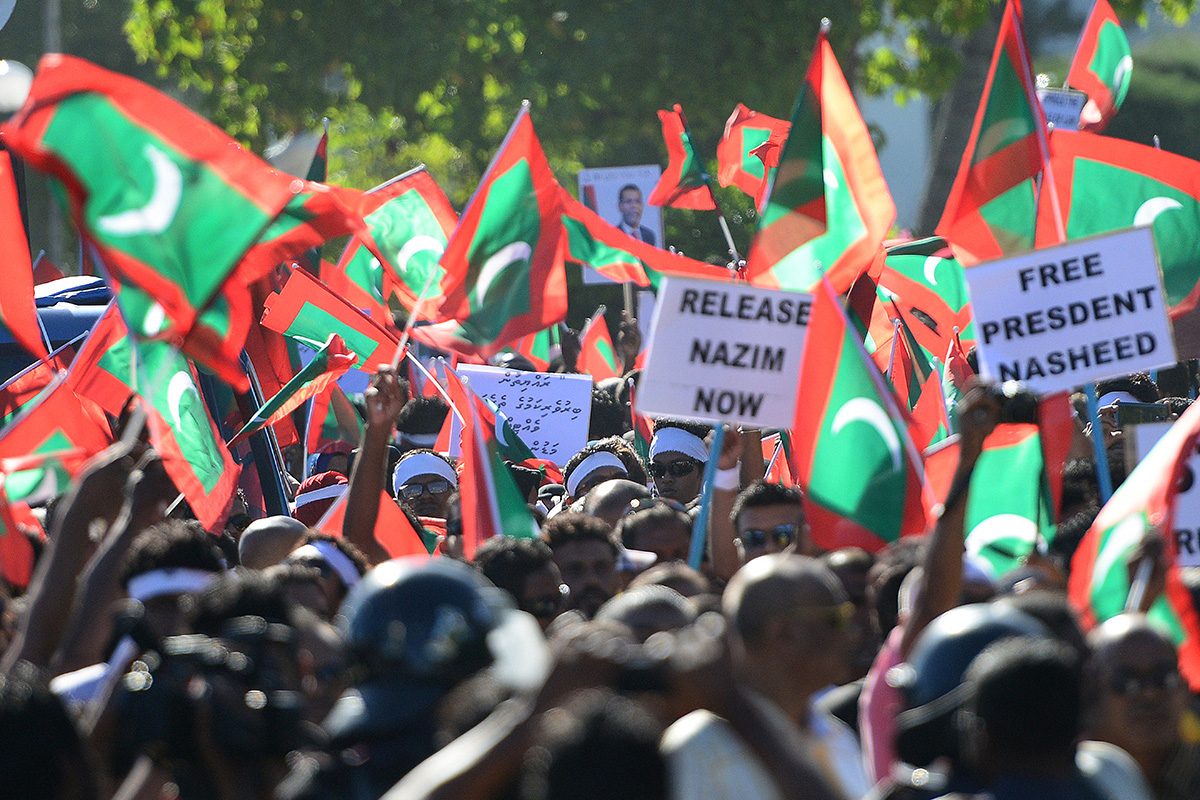 Journalist visas: Reporting on a country that won’t let you in

The Maldives has suffered a turbulent year, with a state of emergency, protests on the streets of the capital, and a hotly-contested presidential election. Riazat Butt, former Editor-in-Chief at the Maldives Independent, spent 11 months working ‘under the radar’ from hotel rooms outside the country after her work visa was refused.

Sometime in the afternoon of September 24, 2018, I learned that Abdulla Yameen had conceded defeat in the Maldives presidential election. I updated the Maldives Independent live blog. Then I cried. I was in a Sri Lanka hotel room and had been awake for almost two days, working through a cyber-attack lasting almost as long, to keep publishing news about an election that could lead the country towards a dictatorship or return it to democracy.

After 12 months, 11 of them not in the Maldives because my visa application was rejected, my time as editor-in-chief was over. The election result indicated a brighter future for press freedom, and gave me a chance to return to the country. But I had little desire to work there again.

I had dealt with blackmail, extortion, suspicions of money laundering, a state of emergency, funding crises, cyber-attacks, isolation and insecurity, in addition to my everyday responsibilities. I deserved a cry, I told myself.

But whatever I did attracted attention because I was female, alone and clearly not Maldivian.

I initially entered the Maldives on a 30-day tourist visa, staying with someone’s relatives to avoid putting my name on a hotel or apartment booking. My SIM was registered to someone else. I met nobody outside the workplace, bar two trusted contacts, while I was in the Maldives. My route to and from work changed every few days because newsrooms were under such scrutiny. I dressed modestly, even slipping on an abaya to cover my gym kit of t-shirt and leggings.

But whatever I did attracted attention because I was female, alone and clearly not Maldivian. The daily street harassment, noise, pollution, heat and crowds of the capital Malé, were so intense I was relieved about heading to Colombo for a short business trip.

The visa application was submitted in my absence and authorities had all the documents specified in immigration rules. The rejection came a few weeks later. It shocked me. At no stage of the recruitment process had I been warned that I might be unsuccessful, that I might have to work remotely. No reason was given for the refusal.

I had been so sure about getting a visa I had left most of my things in the Maldives. But my name had been flagged, according to a police source, and I risked being deported on arrival if I tried to get in again.

I considered marrying a Maldivian to get a visa. A reporter volunteered, but wanted a pay bump to match. I told him we didn’t have that kind of money.

I resisted calls to appeal the rejection because there was nothing to be gained by drawing attention to myself or the website. Also, as one senior NGO figure put it, it was the Maldives’ sovereign prerogative to grant or deny visas. I was not entitled to one simply because I was a journalist, I thought.

Besides, I didn’t want to become the story and there was work to be done: exposing wrongdoing, holding power to account and tackling under-reported issues.

But I didn’t know how to run a newsroom, let alone do it from thousands of miles away, and had no idea where I was supposed to go for the rest of my contract.

I flitted around Asia and even Europe, leading the team from different time zones, directing our coverage and setting the agenda.

I was pushy, single-minded and vocal as I bashed reporters into shape and sent them out on assignment. Messages pinged back and forth about who was doing what, why, how, where and when.

We ran stories on subjects considered taboo in the conservative and autocratic country – the perils of removing the hijab, recreational drug use, mental health, election rigging, unsolved murders, sexual harassment, sexual abuse – and exposed government lies about loans, statistics and development projects. Reporters revealed environmental destruction on islands, and the rifts in the opposition alliance and the trials of being a court reporter in the Maldives.

I often worked up to 12 hours a day, six or seven days a week, and kept hearing how brilliantly I was doing and how fantastic the website looked. I was proud we were the only news website in the Maldives to come under attack during the state of emergency, although I hated not being able to publish. 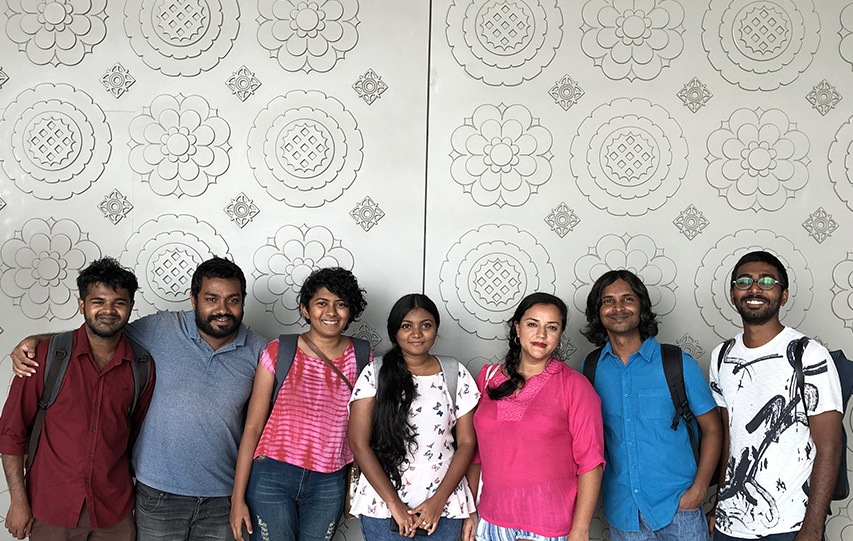 Editor-in-Chief Riazat Butt during a rare meeting with her team in Colombo.

I wasn’t just working remotely, I was under the radar. There were no media appearances. There was no byline for me at the Maldives Independent and I never wrote for anyone else. I had no LinkedIn profile. Sure I tweeted about the Maldives, but I also tweeted about puppies and Brexit.

But among the successes there was frustration and exhaustion: attempting to explain what needed to be done and why — all day, every day, to reporters – or hearing they had no ideas or didn’t know what questions to ask when calling someone on a story. A lot of energy was spent getting the reporters to do the basics. The team was young and mostly inexperienced. I normally thrived in adversity but, at times, the scale of the challenge overwhelmed me.

I told people I worked in admin or that I sold stationery as I felt this would be more believable than the truth.

I also felt guilty that I wasn’t in the Maldives with the reporters. I couldn’t mentor them or help them develop. I felt I was letting them down by not being more patient, stronger, more creative and was devastated at my failure to do any of the things I had promised to do when I was hired: build the brand, get more money, hire more people, do video, graphics and interactives.

I met the team twice after my visa was rejected, once in December 2017 and then in August 2018. I didn’t see them after that, not even when I returned to the Maldives as a legitimate tourist for a holiday after I left my job and the new president had taken power.

The Maldives was a huge part of my life for 12 months. It was my life for 12 months. I knew everything about it, but didn’t share this information with other holidaymakers. They didn’t know about the extremism, the corruption, the backstabbing and cronyism, the pitiful transparency and my role in documenting all of it. I told people I worked in admin or that I sold stationery as I felt this would be more believable than the truth.

As the seaplane puttered over the Indian Ocean on my last departure I could name the islands coming into view, the lawmakers who represented them in parliament, the tycoons who owned the swanky resorts fanning across the water.

Riazat Butt has worked at The Guardian, Al Jazeera English and AFP. She has lived in the Gulf, Asia and travelled widely on assignment. She was Editor-in-Chief at the Maldives Independent from September 2017 until October 2018.

POLITICS AND A MISSING JOURNALIST

Last year the Maldives ranked 120 out of 180 in the Reporters Without Borders Press Freedom Index.

Rights groups criticised Abdulla Yameen, who was president from 2013 until 2018, for leading a crackdown on free speech that saw the country slide down the RSF index during his time in office.

An anti-defamation law and pro-government media watchdogs engendered a hostile reporting climate. Journalists said they were forced to practise self-censorship to avoid crippling fines and lawsuits.

Reporters were also threatened, imprisoned, assaulted, even fleeing the country for their safety while Yameen was in power.

Maldives Independent reporter Ahmed Rilwan was abducted in 2014. The two men charged over his disappearance were acquitted last August and Rilwan remains missing.

Background checks, introduced in 2016 after an Al Jazeera exposé of massive state corruption, meant foreign journalists had to submit extensive documentation as part of their visa application, including a medical report, police certificate, two-year travel history, and bank statements.

The Ministry of Home Affairs barred foreigners from being editors of Maldivian news outlets. It also said only degree holders could be editors, but this regulation was later changed after it was pointed out that just several hundred people from the general population were graduates.

Yameen lost the September 2018 presidential election. The anti-defamation law was repealed in November.