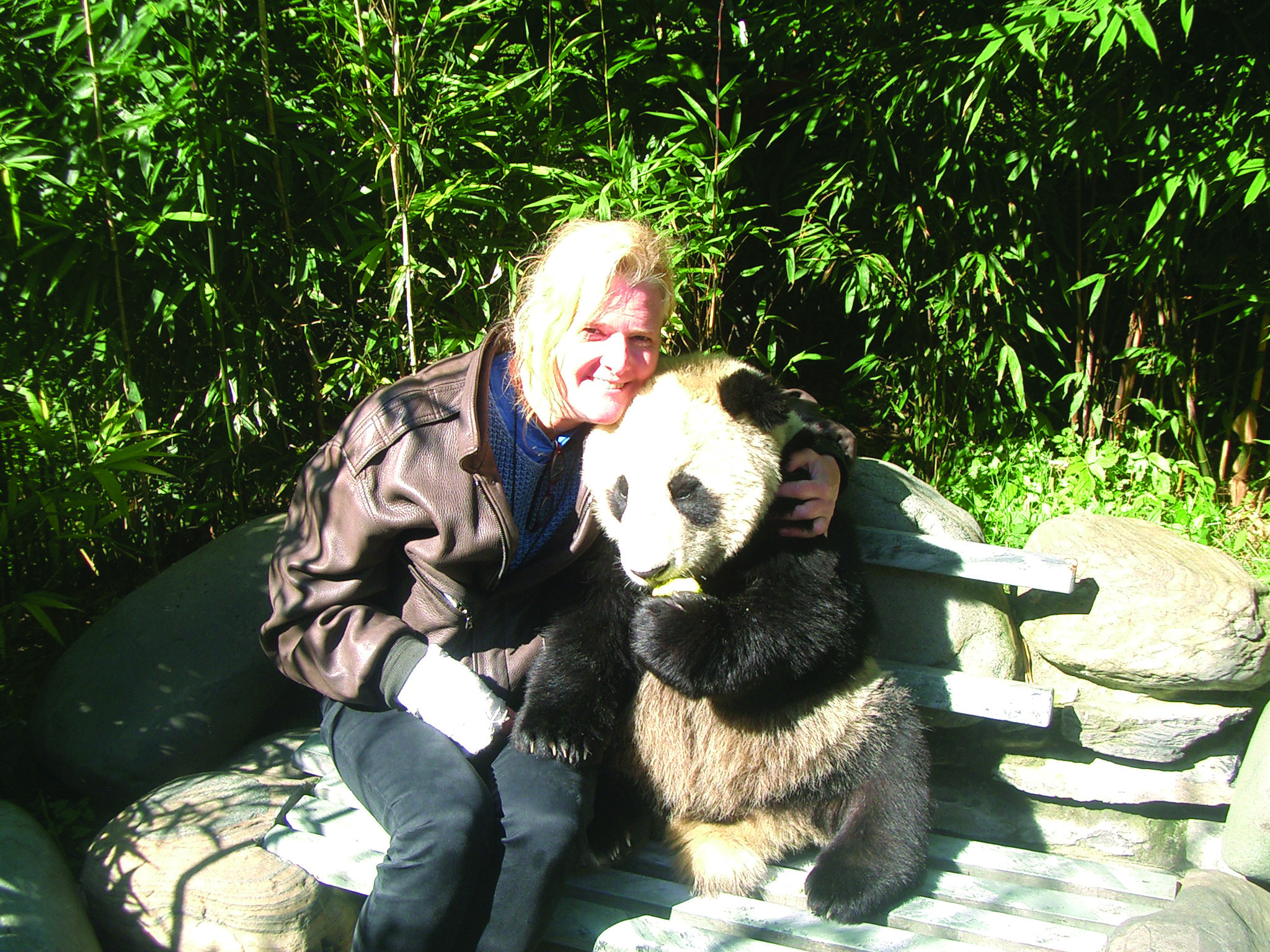 Karin Malmstrom with a Panda at Wolong.

Karin Malmstrom describes herself as a communicator, a connector of dots – between government, communities, and businesses – and as a volunteer for environmental projects… and occasional jazz violinist! She’s just flown in from Shanghai and has a cold, but that doesn’t affect her passion for her subjects, particularly nature.

There’s Wolong National Nature Reserve; her pioneer explorer, geographer and polymath father and the reintroduction of an extinct species to China among her wide-ranging interests. A Sinologist, Malmstrom is a fluent Putonghua speaker, who first showed an interest for China at the age of 13 when she read the oldest of the Chinese classics, the “I Ching”.

“It was subliminal that I became interested in the Orient,” she says. “But at 13 I was already studying the I Ching and I don’t know why and that was something totally unrelated to anything else,” particularly as she was a schoolgirl in Vermont.

Malmstrom’s mother was Norwegian, her father is of Swedish descent “and we lived in an old farmhouse in Vermont. And my father is a professor, [Dr Vincent H Malmstrom] he’s still alive, he has three PhDs, and he is like the Indiana Jones of the Renaissance world. He’s a wonderful thinker and I’m blessed to be able to call him my dad, because he taught us to think from a very early age.”

One of the projects that Malmstrom has supported through her communications work, is conducted by her long-term friend Marc Brody, the founder and president of Panda Mountain, and Wolong’s senior advisor for conservation and sustainable development

And so, from a young age, Malmstrom would be off to discover ancient stories with her sister and parents which also ignited a passion for the natural world. It began with travels with her family to Norway and Sweden, where she could discover her roots. Then it was Greece, “literally as a coup was coming in the 1960s; later while in Mexico, we were climbing pyramids with machetes checking out ancient theories while the Sandinistas raged.”

A research vessel heads for the North Pacific Gyre to study plastic debris.

Malmstrom’s father, who is now 90, “pulls together geography, geology, astronomy and history to solve ancient mysteries” in Central America successfully. From my childhood, we were always on a family trip and we didn’t know we were learning something.”

She describes how he would suddenly stop the car, with a bit of a sigh from her mother. “And it was: ‘Hey kids, this is vertical zonation – a geographer speaking. You’ve got glaciers.’ We grew up in this environment of gentle teaching and communication. The start was there and my curiosity grew. Then I discovered that a relative had been born in Darjeeling and my mother was friends with a woman, whose husband was a pilot during the war across China.”

He was in the “Flying Tigers”, the nickname of the 1st American Volunteer Group of the Chinese Air Force in 1941-1942. “Flying in Burma, China, India, so maybe I was affected by that, but long story short, I have always been fascinated with nature.”

In 1979, Malmstrom graduated from Middlebury College in Vermont after studying Asian studies and geography. She went on to study at the International Institute for Management Development in Lucerne in Switzerland. She would first work and travel in China in the early 1980s, where she initially worked for Lindblad Travel, a company set up by a Swedish-American explorer in the 1950s, to carry out tourist expeditions. A fellow Lindblad employee was fellow FCC member and conservation pioneer Nancy Nash. Nash is credited with suggesting to the World Wildlife Fund, whose emblem was a panda, that they become involved in panda conservation in China and then helping to make it happen.

Now I work for the Cotton Council International which is a global entity based out of Washington that is helping to promote US cotton around the world. I represent cotton growers, who are successfully reducing their waste and farming responsibly these days

Malmstrom and Nash met with tour groups in Yunnan province in the early 1980s, Malmstrom recalls. She and Nash would later co-author a guide to communications issues in China: “The man with the key is not here – a key to what they really mean In China”. It took the format of “The Little Red Book” and was published in 1990.

“So after my initial introduction to the leaders of the panda reserve from Nancy Nash, I went for the first time to Wolong in 1984. It was amazing. It had only been established as a nature reserve the year before – and the people who ran the place were all zoologists – not bureaucrats.”

This began her long connection to the panda reserve. “Ever since then I have had a strong bond with the people there no matter what role they were in. They’re absolutely wonderful, dedicated people. But the worst nightmare is if Wolong turns into a panda show – a destination for tourists,” she says, because, as she puts it, “it’s about so much more than just the panda. It is also about preserving a habitat of plants and other animals that require  the integrity of Wolong to be kept intact.

“About the biggest thing that I have to offer is communication skills and being a conduit between everything, and I mean everything,” she says. “Like a diplomat. I can be an environmental diplomat, a business communicator. I can dance to any party, really. For me it’s all about environment, making sure that humans, animals, the planet are all intact, preserved.”

Oceanographers and volunteers collect plastic debris in the North Pacific to study the environmental impact on our seas.

One of the projects that Malmstrom has supported through her communications work, is conducted by her long-term friend Marc Brody, the founder and president of Panda Mountain, and Wolong’s senior advisor for conservation and sustainable development. Malmstrom is on the board of Panda Mountain, acting as treasurer. “I facilitate communications among various parties, including potential sponsors, and when I travel to Wolong, I assist with fundraising activities, translating and liaison among villagers and local government entities. Last spring we brought a group of journalists and a sponsor, Les Enphants, a children’s-wear brand, to Wolong to see the new Panda Center,” and visit the nurseries of indigenous plant species.

Like Malmstrom, Brody, who spoke at an FCC lunch earlier this year, has concerns about whether Wolong, following the devastating earthquake in Sichuan in 2008, can maintain its integrity. A Unesco World Heritage report confirms that the reserve and the surrounding protected areas comprise “the largest and most significant remaining contiguous area of panda habitat in China and thus the world”.

But it’s not just about the panda, says Malmstrom, it’s about ensuring that the animals, local plant life and people can co-exist harmoniously. Brody is also keen to fulfil Unesco’s goal of informing and engaging local people in property management and in conservation awareness, but that’s difficult when Sichuan’s reconstruction efforts involve dense housing projects along the highways of Wolong.

“Marc has very important projects there,” says Malmstrom. “I’ve been to his nurseries  where they are growing indigenous species of plants to replace all the invasive species that were introduced. These ‘invaders’ are hopefully now being eradicated so that they can plant the indigenous species to attract the local, highly endangered animal residents of the area, including the Giant Panda, lesser panda, the golden pheasant, and the takin [gnu/antelope]. There are many animals there, so all of this area is not just about the panda, it’s all about the environment, conserving and restoring the indigenous habitat, so that all of the indigenous species can recover.

“I support Marc’s work because it is about restoring a whole habitat and then educating young people about why it is important not to destroy these things. And it’s also important to involve the local villagers at all levels of the project. When you have this precious area of unique species of plants and animals, a symbiotic relationship is necessary,” she says.

In 2009, she joined Doug Woodring, the co-founder of Project Kaisei, which sent two research vessels into the North Pacific Gyre in an alliance with leading oceans’ institute, Scripps Oceanography, in order to study the plastic debris that has converged there

A brief look at Malmstrom’s CV and there’s plenty of echoes of her father. She’s scaled Mount Kilimanjaro and some of the Himalayas in Bhutan; she’s worked on vessels in the Galapagos Islands, and along the Yangtze River and the China coast. In 2009, she joined Doug Woodring, the co-founder of Project Kaisei, which sent two research vessels into the North Pacific Gyre in an alliance with leading oceans’ institute, Scripps Oceanography, in order to study the plastic debris that has converged there.

“Now I work for the Cotton Council International which is a global entity based out of Washington that is helping to promote US cotton around the world. I represent cotton growers, who are successfully reducing their waste and farming responsibly these days.  There are many messages that don’t get out.”

There are plenty of stories of mammals driven into extinction by human activity but Malmstrom worked on one that saw the reintroduction of a deer to its native China.

In this case, it involved an indigenous species – the Pere David’s Deer – being brought back to China after they became extinct when the last deer had been shot during the Boxer Rebellion in 1900. However, the deer which did exist in European zoos were eventually gathered by conservationist the 11th Earl of Bedford in 1903 and formed into a herd at Woburn Abbey Deer Park in Bedfordshire, England.

Malmstrom tells how she worked with Slovakian-American zoologist Maria Boyd, who knew the then Earl of Bedford. “We brought back 22 head of deer to the Imperial hunting ground south of Beijing. My role was as liaison and translator with the pig farmers to work out an agreement to turn a commune and a pig farm into a deer reserve. And we did it.”

“I will never forget the day in 1985 that Lord Tavistock [the Marquess of Tavistock, later 14th Earl of Bedford] came to China, to personally release the deer into this ancient imperial hunting ground that we had negotiated back from the pig farmers. And now the deer are flourishing!”