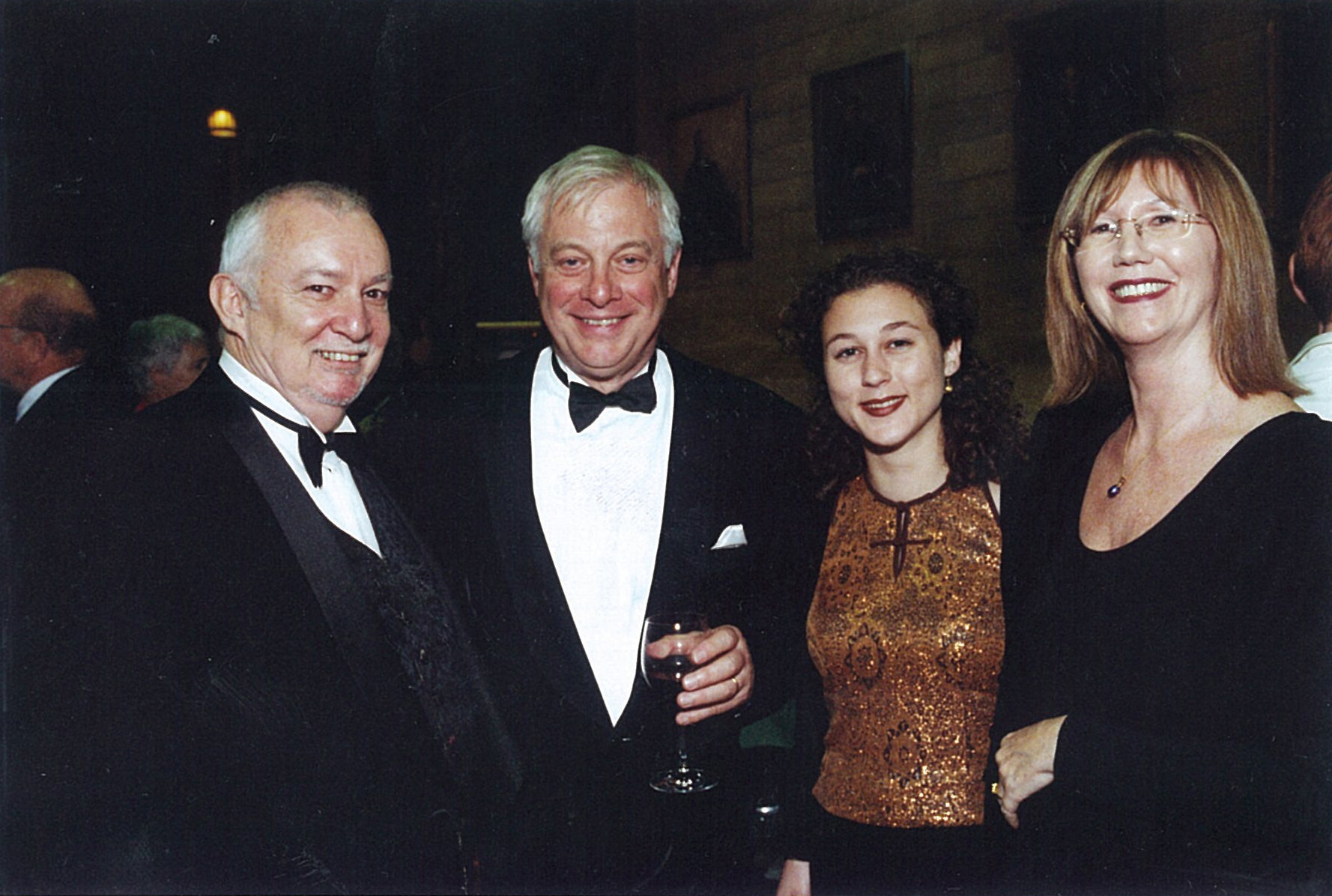 Kerry McGlynn: Working with Chris Patten was the best experience of my life

Kerry McGlynn arrived in Hong Kong in 1974 to fulfil a two-and-a-half-year contract as a spokesman and advisor for the government. Being a spokesman for Chris Patten during the delicate handover negotiations was no doubt a highpoint in his long career. After nearly 30 years with the government in Hong Kong, London and New York, six-plus years with Cathay Pacific and three years with Swire Properties, Kerry finally returned to Sydney and a well-earned retirement. “I’ve had a ball doing all of these jobs,” he says.

Kerry spoke to club correspondent member Stephen Marshall on his thoughts on post handover Hong Kong, working with Chris Patten and on today’s world of alternative facts and fake news.

SM: What was it like to work with Chris Patten and how did that come about?

KM: Chris Patten was the first governor to have his own spokesman and I got a chance to work for him when my predecessor, Mike Hanson, went on paternity leave. Working for Chris was the best experience of my life. He taught me more about politics and PR than I’d ever managed in the decades before. And he became a great friend and mentor, supporting me all the way even when I might have misspoken to a journo late at night after the odd glass of lip-loosening wine.

SM: He was well known for being Margaret Thatcher’s speechwriter, how did that play on you when putting pen to paper?

KM: Chris was himself a fantastic writer. He would have been a great journalist. He always put his own touches to anything drafted for him and on overseas trips he’d usually tailor his speech for each particular occasion. I never wrote much for Chris, though people thought I did. I did the odd news piece for him and lots of letters to editors, but mostly with the help of his two famous “turtles”, Martin Dinham and Edward Llewellyn (now Lord Llewellyn of Steep). But before, and more particularly after the Handover, I wrote a lot of speeches for Anson Chan and later Donald Tsang, though my great Aussie mate at ISD, Brett Free, was Donald’s main man.

SM: Any favourite quotes you gave to journalists?

KM: As the Handover drew near, there was a noticeable shift in allegiances between the great and good who had prospered under the British to a more favourable disposition towards the incoming landlord. When Steve Vines asked me about this, I replied that ‘there are some people from Hong Kong who have gone from a garden party in Buckingham Palace to a banquet at the Great Hall of the People without even making a stopover at Damascus to announce their conversion.’ When Steve filed this quote for the Independent he was queried by London who thought he must have made it up. He hadn’t. I gave the same quote to Ian Buruma from the New York Review of Books and it duly appeared in that great organ.

SM: In 1996, during a blazing row with Chinese Foreign Minister Qian Qichen over the Hong Kong media’s right to openly criticise Chinese leaders, it was reported that you said “If personal attacks against the Governor were not allowed, there would hardly be any journalist not in jail… that’s a free press and that’s what Hong Kong has been promised.” Has that promised been upheld?

KM: As far as any of us can see, the answer is sadly ‘no.’ Beijing has put enormous pressure on the Hong Kong media – think how the locals derisorily call TVB ‘CCTVB’ – and, with one or two honourable exceptions, it shows.  But there are still brave journalists fighting the good fight in Hong Kong and we should all support them as far as we can. The FCC does a great job on that.

SM: Where were you on June 4, 1989, and what are your memories from working in such a heated environment?

Prince Charles awarding Kerry his OBE at Government House in 1997.

KM: I was running the Hong Kong government office in New York and was absolutely devastated. Just a day or two later I had to go to Columbus, Ohio, to give a speech to the local business chamber to tell them how Hong Kong would be hunky dory after 1997, put your heart at ease and all that.  When I got there, it was obvious that my stump speech was not going to cut it, so instead we had a pretty frank informal round table chat about what was going on in Hong Kong and Beijing.

Later that day I gave an interview to a business reporter from the Columbus Ohio Despatch and more or less off the cuff I outlined all the trials and tribulations Hong Kong had overcome in its brief but spectacular history and expressed confidence in us bouncing back in time. The interview splashed on the front page of the Business Section next morning. When I faxed the clipping back to Hong Kong, Tony Miller (then Information Coordinator) adapted it as the HKG’s line to take on how Hong Kong would no doubt bounce back from the trauma of June 4. And, of course, it did.

SM: Apart from demographics, how has Hong Kong changed for you, if at all?

KM: If a Man from the Moon were to land in Hong Kong today, he would be blown away by the energy, the pace of life and the smarts of the people he’d encounter in the teeming streets of Causeway Bay or Yau Ma Tei. And he’d wonder how long it would take him to get through all the fabulous restaurants, eateries and bars. But that’s all on the surface. Society is fractured and fractious. I know smart, well educated, highly skilled middle class friends with young kids who see no future for them in Hong Kong.  Some have already gone, others are making plans. It’s all very well for the control freaks in Beijing to drive a wedge in the community, but they should take time to reflect on what has caused the disenfranchisement of the young and the role their policies have played in it. But it’s not all their fault. The amateurish politicians we have on all fronts haven’t helped much, either.

SM: Given close to three decades as advisor and spokesman for the government in Hong Kong, what’s your assessment on “alternative facts” and press strategies taken from the “fake news” playbook?

KM: The most disturbing thing about Trump’s “fake news” and “alternative facts” playbook is that so many Americans choose to believe them. The scary thing is that until his core constituents wake up and see that the great promises he made to them can’t be delivered they are likely to continue believing them.  Telling porkies and just making stuff up and shooting from the hip is no way to run a government, particularly one as large and as globally important as the US government.

SM:
What do you think President Trump and his spokespeople, Kellyanne Conway and Sean Spicer, are really up to?

KM: God only knows what the Trump White House is up to. To quote one of Chris Patten’s favourite words, I am continually gobsmacked by Conway and Spicer – sounds like a comedy duo, doesn’t it?  Their contortions to explain away Trump’s accusation that Obama had wiretapped him would have been comical had it not been so serious coming from a spokesman from the most powerful politician on the planet.

SM: Will it work and how does that strategy differ from what you would suggest?

KM: How to get things back to normal? What is normal about the Trump machine? We’re living in the new normal now and no matter what good advice Trump might be getting – assuming there’s somebody sensible there or thereabouts – he can undo that in a single early morning Twitter tirade. He’s demonstrated that so often. It’s government by tweet.

SM: Are different approaches required nowadays given the advent of social and digital media?

KM: I’m famously technoplegic (a word I invented for myself) so I am the last person to comment on the rise of social media, other than to say get yourself a team of (preferably) young guys and gals who know all about it and listen to what they have to say.

SM: How do you see Hong Kong’s future?

KM: Hong Kong has been wonderful to me so I hate to slag off the place in any way. But it’s pretty scary the way Beijing has increasingly interfered in the running of Hong Kong to the point that they don’t even try to pretend they’re not. The way Carrie Lam was railroaded through the Election Committee by the Chinese Liaison Office in Western is but one egregious example when it was perfectly  clear that John Tsang was the person Hong Kong people wanted to lead them. Nobody should have been too surprised by Beijing’s arm twisting tactics. After all, as David Akers Jones once famously told the Guardian, the Chinese have nothing against elections  – as long as they know the outcome in advance.

SM: And what does the future hold for Kerry McGlynn?

KM: Longevity, I hope. I have a large extended family in Sydney and heaps of mates, mostly old journos. I love getting together with them to rehash old war stories. Reminds me how happy I was as a hack until I went to the dark side in Hong Kong.

SM: Can we expect to see you at the FCC from time to time, I’m reliably informed you were back in town only weeks after your farewell dinner!

KM: Yes, I was back to do a job a few weeks after I left – and I’ll continue to be back and forth between Sydney and Hong Kong – you can rely on seeing me on Sevens weekends – and the most important item in my luggage will be my FCC card.