News The Correspondent Looking Back on a Year of E... 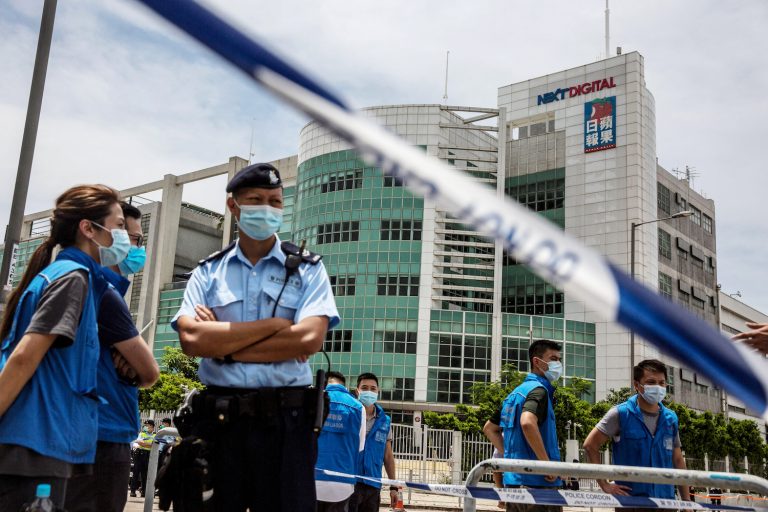 Editor’s Note: As The Correspondent went to press on 17 June, NSL police were once again searching Next Digital headquarters after arresting Apple Daily’s editor-in-chief Ryan Law and four other executives for alleged collusion with foreign forces.

How did Hong Kong media react to a catch-all law that sent shockwaves through the territory and beyond? Jennifer Creery explores the law’s far-reaching ramifications. 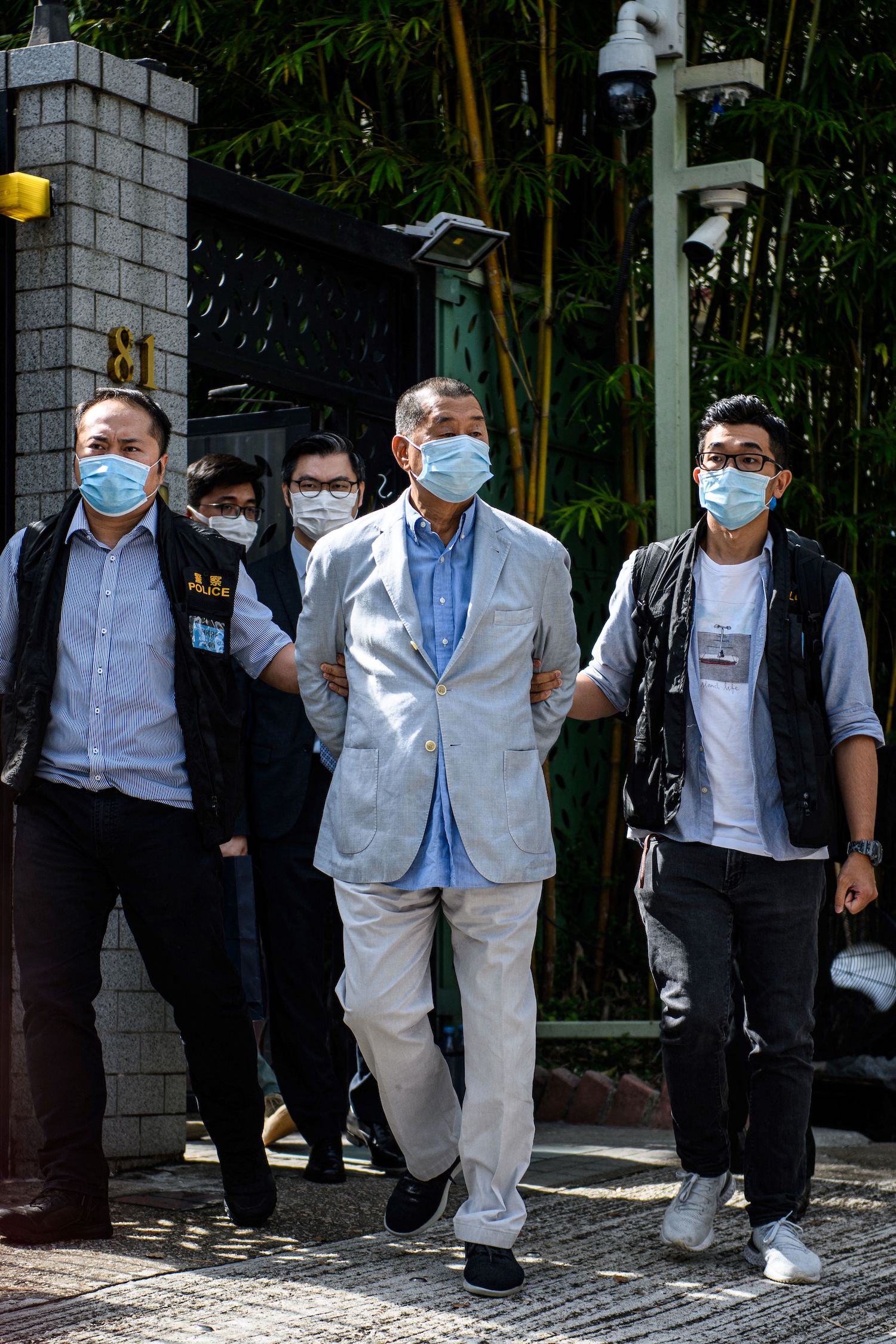 Police lead Hong Kong pro-democracy media mogul Jimmy Lai, 72, away from his home after he was arrested under the NSL on 10 August 2020. (Photo: Vernon Yuen / AFP)

On the morning of 10 August 2020, hundreds of national security police raided the Tseung Kwan O office of Next Digital, the parent company of pro-democracy newspaper Apple Daily. Winding up the slate staircase, uniformed officers made their way into the newsroom on the second floor, occasionally stopping to inspect items on desks. Just hours earlier, police had arrested the company’s founder, Jimmy Lai, at his home in Ho Man Tin for alleged collusion with foreign forces.

The unprecedented arrest and raid were two of the first major acts against the press carried out under the National Security Law (NSL), enacted on 30 June 2020. Just days after the law was passed, Hong Kong Chief Executive Carrie Lam said she could guarantee press freedom if journalists could also guarantee “that they will not commit any offences” under the law.

Long a thorn in the side of the establishment, Apple Daily was a predictable first target. Founded in 1995, the tabloid made a name for itself with its celebrity gossip, shoe-leather reporting and criticism of Beijing. It doubled down on its position during months of street protests that began over an ill-fated extradition bill in 2019, drawing the ire of government officials. Police said in a statement on Facebook that officers had entered the building with a search warrant to investigate an offence related to the legislation.

In the year since the NSL became a reality, Hong Kong’s media landscape has undergone a seismic shift: The New York Times has started moving approximately one-third of its Hong Kong staff to Seoul in South Korea; iCable fired 40 staff last December; and civil servants working for public broadcaster RTHK have been required to pledge allegiance to the government.

RTHK has also deleted critical programmes across its web and social platforms; axed politically contentious shows; and attempted to pull submissions from awards, while its freelance producer, Bao Choy, was found guilty of knowingly making false statements to obtain vehicle licence records – making her the first person to be convicted of a crime related to the Yuen Long mob attack on 21 July 2019. In May, RTHK fired journalist Nabela Qoser, known for her tough questioning of officials.

“It’s pretty unprecedented for anyone anywhere in the civil service to lose their job,” says David*, an RTHK staffer who asked not to be identified in order to speak freely. “Civil service contracts are the golden rice bowl.”

His account of the last three years tells a bleak tale of shifting goalposts and self-censorship, accelerated under the new Director of Broadcasting Patrick Li. Previously the Deputy Secretary of Home Affairs, Li was ushered in during an overhaul of the organisation after the law’s introduction. 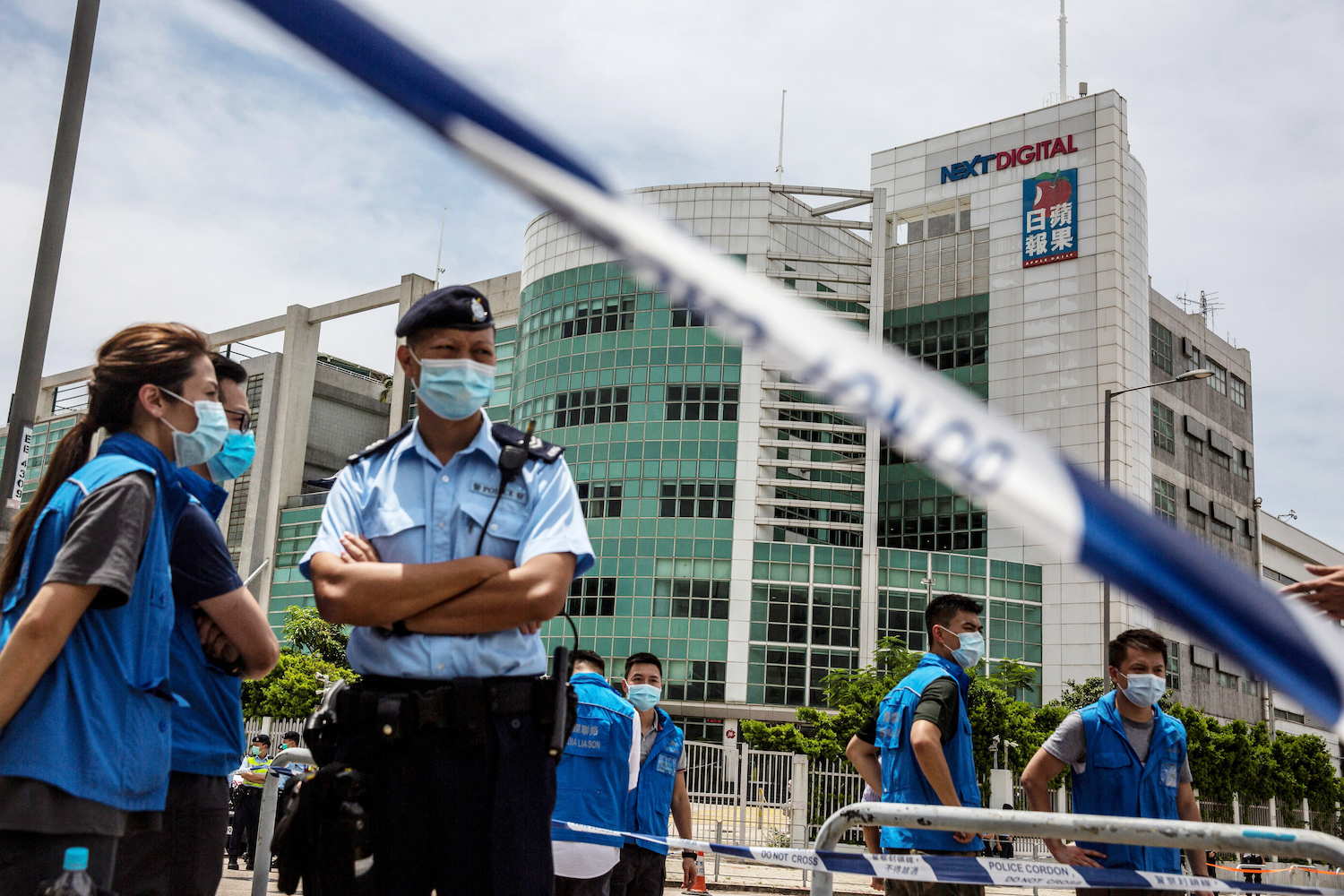 According to David, an interview with democratic district councillor Michael Mo was axed from the programme “Letter to Hong Kong” without explanation; a re-recording of the segment with the Hong Kong Journalists Association (HKJA)’s Chris Yeung was also rejected under murky circumstances. In the end, Eugene Chan, the president of the pro-Beijing Association of Hong Kong Professionals, put in an appearance instead.

“The HKJA is facing an increasingly difficult environment in defending journalists’ rights,” Yeung tells The Correspondent. “The association is itself being targeted by pro-Beijing media and groups. [But] we will continue to speak up and stand alert.”

In another instance, David says, senior management from RTHK’s editorial committee questioned producers over whether a show on Myanmar could be interpreted as a commentary on Hong Kong – up to four hours before going on air in March. “It’s intimidation and creating deliberate uncertainty,” says David.

For the news writing team, he says, one method for working around political sensitivities has been to lead articles with government or police statements, thus giving credence to the stories.“We’re relying on doing things in the shadows and hoping [management] doesn’t notice. But of course, that’s not the way you should be doing it. You should be taking pride in your work.”

David’s experience cuts across many newsrooms in Hong Kong. HK01, an online outlet known for its investigations and close government contacts, faced an internal dilemma in the tumultuous months before the enactment of the law, according to a reporter, John*, which is not his real name.

John says both HK01’s founder, Yu Pun-hoi, and Chief Editor Ernest Chi Pan-year, asked staff to update the headline of an article containing arrest figures because it created a “negative image” of police and was too sympathetic towards protesters: “I think [Chi] wanted to maintain a good relationship with police. In the past they were only sensitive to [mainland] Chinese government issues,” says John.

At Next Digital, the situation has grown increasingly tense since the raid and arrest last August. As staff gathered on the floor of the newsroom on 5 May, Cheung Kim-hung, chief executive of Next Digital, responded to rumours that authorities would force the newspaper to close in the coming months, declaring: “Apple Daily will not close on its own.”

It was a defiant stance but provided little relief for some staff. “They felt that management didn’t have a contingency [plan] in place and that their fears had been dismissed,” says Oscar*, which is not his real name, a reporter who attended the meeting. 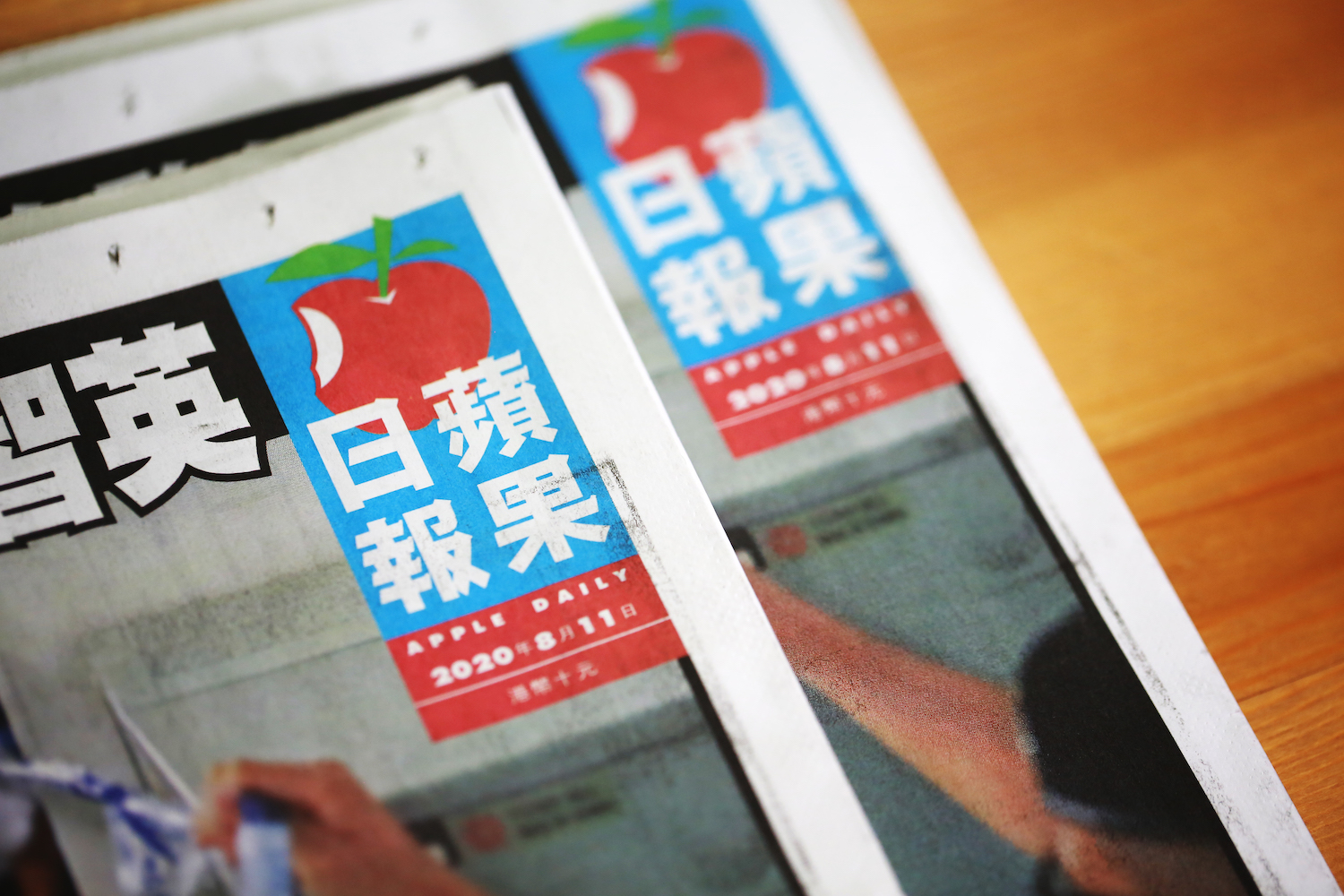 Founded before the Handover, Apple Daily has rarely held back from running hard news stories, especially when it comes to lambasting Beijing.

For over a year, Next Digital staff had been feeling pressure from the police. Between April 2020 and 2021, the police public relations bureau sent at least 89 “misleading report” letters to Apple Daily. In response to a report on a Hong Kong Police College open day to mark National Security Education Day on 15 April, the force criticised a photo caption reading, “What have [police] taught the next generation?”, and accused the publication of “distorting the original purpose” behind the event.

In an email reply, a police representative told The Correspondent that the department sent the letters to improve public understanding in order to “earn their support and trust … There has been an overwhelming volume of unfounded information circulated in the society over the last few years,” wrote the representative. “Police absolutely respect freedom of speech and freedom of the press.”

Despite management reaffirming its commitment to editorial independence after the NSL, Apple Daily has not been immune to internal controversy. On 15 April, the Equal Opportunities Commission released a letter that chided the newspaper for its continued use of the term “Wuhan pneumonia” to describe COVID-19, which was first detected in the capital of Hubei.

Within a week, Apple Daily replaced the term with “Pneumonia epidemic”. Some staff saw it as a capitulation. “I think that incident was the first [of its kind] – that’s why it drew such a response,” Oscar says. 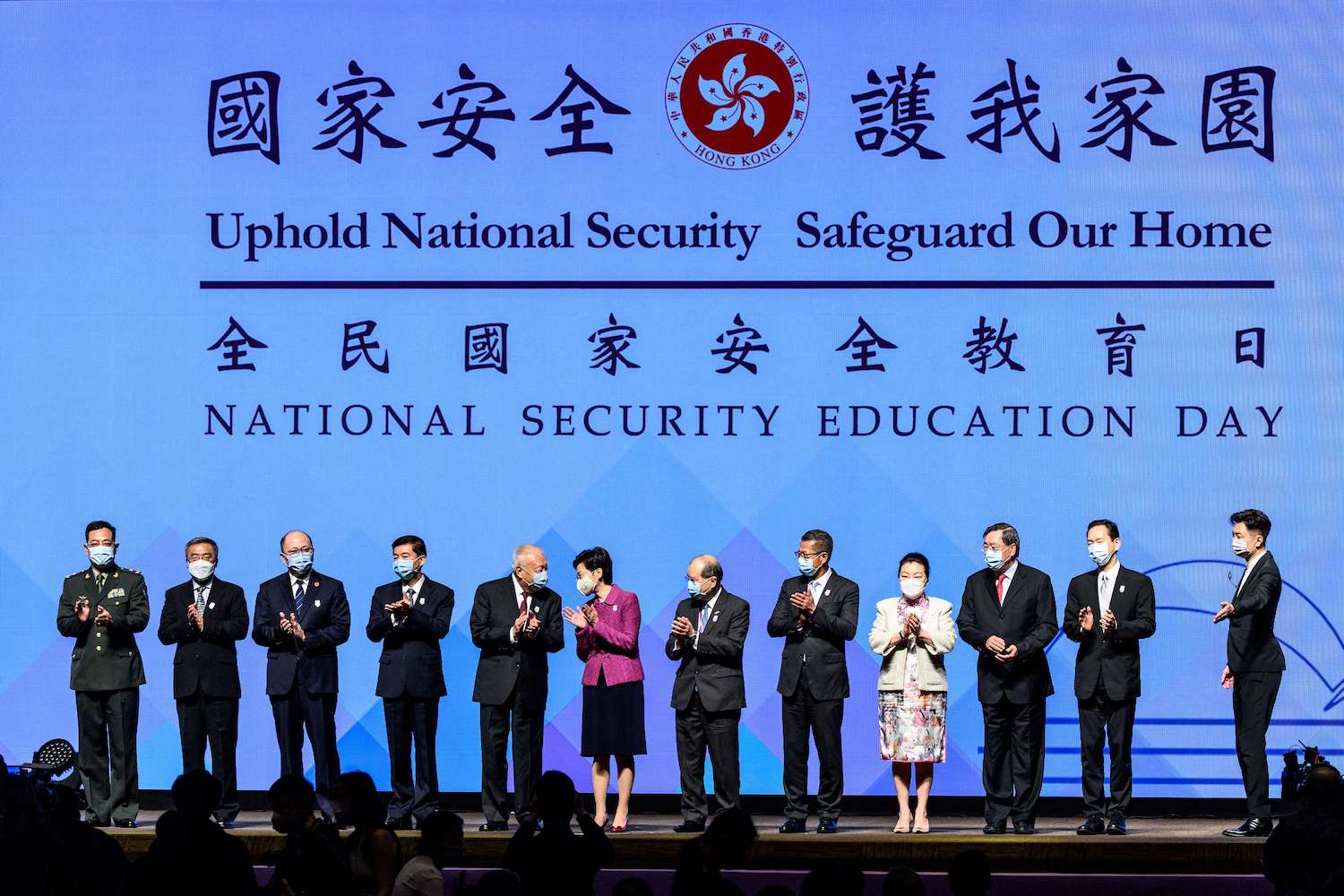 The working conditions for many local journalists were far from ideal before the NSL brought added risks and pressures. Low salaries and long hours, coupled with increasing output quotas and news fatigue, meant that several years into the profession left journalists burnt out and looking for alternative career options.

“I want to leave but which media can I go to?” asks John, who laments a scarcity of well-paid positions on teams similar to his at HK01. “[Journalists] have a higher level of education; we have a bachelor’s degree, but our salaries are so low. And after the protests [and NSL] we could get charged – so why do we stay here and do this job?”

Some have chosen to leave. Three HK01 staffers, one of whom was senior, have immigrated to the UK, according to John. Several former staff at Apple Daily have also departed for places including the UK, Oscar says, due to poor working conditions, worsened by political pressures.

This kind of industry brain drain threatens to usher in a generation of younger, inexperienced journalists who may lack the judgement, skills and sources to provide the quality of journalism delivered by their predecessors. In particular, they may have yet to establish in-roads with government officials or police officers, relying on carefully tailored press conferences and statements.

“It’s impossible for new journalists to build those sources,” says Oscar, pointing to the precarious nature of building trust in professional relationships after the NSL. “If you have watched i-Cable TV after the mass walkout [in December 2020], there is quite an obvious difference in the quality of the programmes.”

Now that the NSL is a day-to-day reality, Oscar casts a gloomy eye over his career. He says he had, like many other journalists, pursued a career as a reporter with hopes that a more informed society would lead to democratic development. “To end up in a completely opposite direction – it is not what I expected.”

Jennifer Creery is an FCC Clare Hollingworth fellow and Curated Content Editor at the Financial Times. Prior to her current role she was an editor at Hong Kong Free Press.