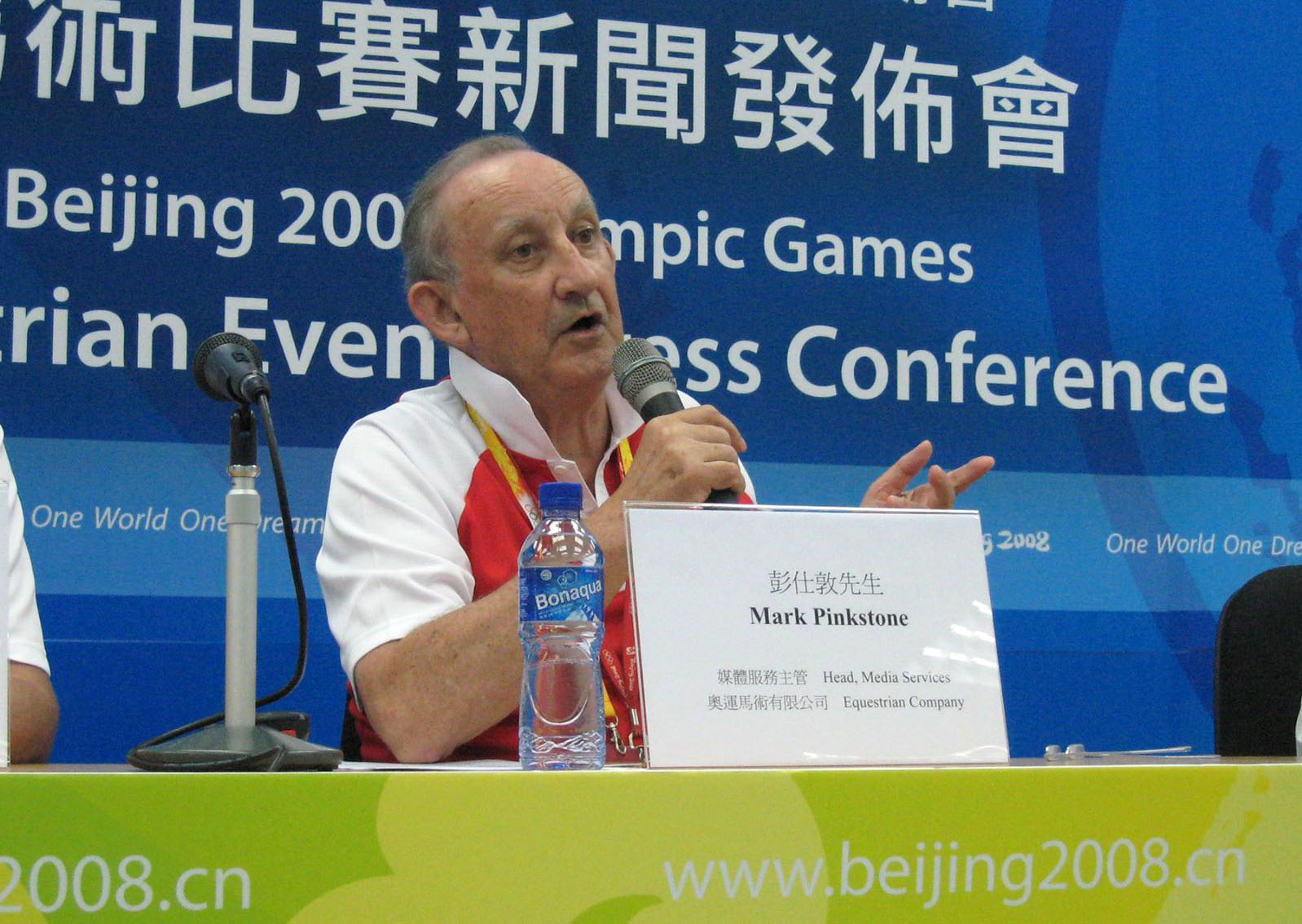 Club life member, Mark Pinkstone is about to celebrate 50 years working and living in Hong Kong. As Stephen Marshall writes, a lot can happen in a lifetime when you move from Cootamundra to Hong Kong in the wake of the 1967 riots.

It should have been the happiest of occasions. After a newsroom romance at the South China Morning Post Mark and his beautiful bride Tammy set out for their honeymoon cruise.

“During the aftermath of the 1967 riots we took an old river boat from Western District in Hong Kong to Taiwan. Going on board the boat, people on the pier abused Tammy left, right and centre for marrying a gweilo and they were throwing live cigarette butts in my face, there was pushing and shoving. Back then Western was very much a communist held area. We didn’t realise until we got there how serious it was. Some way to start a honeymoon,” said Mark Pinkstone.

A fourth generation journalist who hailed from his family’s rural newspaper, the Cootamundra Herald, in regional New South Wales, Mark had the travel bug after stints at the New Guinea Times-Courier, Melbourne’s Truth newspaper, and the Daily Telegraph in Sydney.

“There was an editor at the Illawarra Daily Mercury in Wollongong, south of Sydney (where I went during a newspaper strike in Sydney) we all hated, and after several beers one night at the local watering hole, six of us decided we’d quit the Mercury the next day, which we did. Someone then suggested Hong Kong would be a good place to go.”

True to their word, all six ventured to the British enclave. John Carroll eventually joined RTHK where he stayed until retirement, Brian Blackwell ended up at the China Mail, Hilary Alexander also joined the Mail before becoming Fashion Editor of London’s Telegraph, while Don Rudd and another joined Mark at the Post.

“Everything was corrupt back in those days. I decided to do an investigative piece from a Westerner’s perspective on what it was like to attend a traditional Chinese funeral, only to find out that widows had to bribe the gravediggers or a sod would never be turned.”

The article caused a fuss at the Urban Council. “At the time, the graveyards were run by the Urban Council, and shortly after the article was run on the front page of the Post, I was invited to lunch by an Urban Councillor. A colleague advised that towards the end of lunch I should leave my jacket on the back of my chair, go to the bathroom, and on my return, check to see if a red ‘pay off’ packet had been put in my jacket pocket to settle the matter, and if it had, to get up and leave. It was 1970 and Mark declined the lunch invitation and left the Post instead.

“In those days (after the riots) it was so corrupt a fireman wouldn’t turn on a hose unless he was slipped a bribe.”

Come 1977 Hong Kong was gearing up for the Joint Declaration and for Mark, the “dark side“ beckoned. “I joined the Government Information Service and was seconded to the Agricultural and Fisheries Department to head up the publicity drive for the new Country Park Authority. Governor Murray MacLehose had given the department one year to win the public over to his parks plan, or he’d hand the land to developers.”

History shows Mark and his team did a great job, and after returning to the GIS, he helped prepare the White Paper on electoral process and assisted in the research during the Handover negotiations. He rose through the ranks to become the number one PR man at the seat of power – the Chief Information Officer for the Government Secretariat.

“It was virtually a one-man show handling all policy secretaries from the Chief Secretary down. The Governor, we are now talking the Youde period, was handled by his own press secretary, and I looked after all the others. I had myself and three other people running the whole show. Every morning at 8 o’clock, I’d get my briefing notes of what the papers had been saying and then go to each of the Secretaries and brief them on what was going on and what would affect them. I would then make up the lines to indicate what they should say if necessary. Every day was a drama.” None more so than “Black Monday”, October 19, 1987, when Hong Kong sparked a global stock market crash.

“I was in my office early morning, listening to RTHK when they announced the Hong Kong stock market had closed, no trading for the day. I thought ‘Jesus Christ’, so I called the Financial Secretary, Sir Piers Jacobs, and said ‘did you know the stock market had just closed?’. He said he had spoken to Ronald Li – the infamous Ronald Li who was then chairman of the stock exchange and who subsequently finished up in jail for corruption – at four o’clock in the morning and they’d agreed to keep the market open, to keep stability.

“Ronald Li apparently panicked, closed the market, and didn’t tell the Financial Secretary. By the time Jacobs found out about it, it was too late and it was a major, major disaster, absolutely, talk about crisis management!” Many more dramas were to follow.

“I never believed I’d go to the dark side having been a journalist for about 10 years, and once a journo you never trusted the government. But once I joined the government you could see a great deal of the other side of the story, in particular to see how policy was formulated, how much work goes into policy and how much consultation is involved. A lot of people don’t realise this and that’s why it takes so long for bills to get approval. For example, another job I had as Chief Information Officer was to look after the Executive Council. I was privy to all the Exco papers and I was asked to comment on every aspect of every paper that went to the Executive Council. The papers were actually kept in a safe in my office because they were so confidential. When I took over the job, the bloke that I succeeded refused to give me the combination to the safe. In the end, I had to get it from the Director.

“There are always leaks in government, doesn’t matter where you are, and we were always suspected of leaking all the stories to the press. We were the obvious target, so much so, the clerk of the Executive Council would sit in my office every morning pretending to read the newspaper so that he could listen to our phone calls!. All of these experiences were very enriching. Although it wasn’t always fun and games; the media didn’t always behave well.

“One of the most bizarre was the BBC, I’ll never forgive them for it. What they did one day, was hire about 20 actors, dressed them up in PLA uniforms and marched them down Chater Road early in the morning, saying that the PLA was going to take over Hong Kong.

“People from around the world were calling their relatives in Hong Kong saying what’s this about the PLA taking over Hong Kong? The BBC’s defence was that they blurred the pictures a bit and that people would know it was not real.

“Another famous one was a Fortune Magazine cover story about the death of Hong Kong, which affected all our investors.

Mark meets the press during the recent CE elections.

“But on the whole, the job was great and being chief of ‘overseas’ I got to travel a bit as well. I got into the White House, Number 10 and the State Department and many of the reporters and photographers from then are still good friends today, such as Jody Cobb and Steve Raymer of National Geographic. I enjoyed working with sensible people like that, when you see the pros at work you are honoured just being in their presence and you learn a lot from them.”

When Mark retired from the Government in 1995, the FCC bestowed upon him Honorary Life Correspondent Membership for his contribution to foreign correspondents in Hong Kong and Beijing.

Come the Handover, Mark decided it was time for a new challenge, one that involved still living in Hong Kong but working outside, as Director of Corporate Affairs for the Kuala Lumpur listed, Datuk Keramat Holdings (DHK) Bhd Group of Companies. He was to handle bank acquisitions and sales, retail supermarkets, department stores, pharmacies and head up corporate affairs for the largest film studios in Europe, Leavesden Studios, host to James Bond’s GoldenEye, Mortal Kombat Annihilation and Star Wars: The Phantom Menace, as well as handling a bank acquisition in Geneva.

By the millennium Mark had largely moved to running his own show, the Beijing Olympics being a highlight when he headed up press operations and media services for the Hong Kong based equestrian events for the 2008 games.

Two months ago Mark turned full circle and moved from decades behind the headlines to creating them once again, when, as the former Chief Information Officer for Regina Ip’s Chief Executive campaign, he called the whole election process a “farce.”

“Unfortunately, Regina lost the race early in the game. But I wrote an exposé about the role China’s Liaison Office (CLO) had in swaying the elections.

However, I was criticized for not publishing the story before the elections.  But that is not right. I submitted the story to the South China Morning Post Op Ed Editor on March 21, one week before the elections, but it was rejected on the grounds there was ‘no space.’ A copy had also been sent to the Post’s Political Editor.

Mark was head of press and media services for the Hong Kong based equestrian events for the 2008 Olympic Games.

After the rejection, I posted the story on my Facebook page and this was picked up, in part, by Reuters. Still seeking to publish the full story, I gave it to Tom Grundy at Hong Kong Free Press and from there it went viral in the Chinese media. The Post then realised it had missed a good story (even though it was given to them two weeks beforehand) and decided to run it with a few follow-up questions. But lo and behold the headline blasted that I had apologised to the Liaison Office. What! Me apologise to the Chinese Liaison Office? Never! A good libel case could have followed but I rang an editor instead, who promised a retraction. And as Nury Vittachi said in a FB post, the heading didn’t match the story. Well, there was a weak new headline, so I let it go.

“The Post was once one of the leading English-language newspapers in the world. Today it is not. To paraphrase Donald Trump: ‘sad, so sad, so very, very sad…’,” said Mark.

Which shows 50 years on, he and his lovely partner in life Tammy, are still up for the good fight.