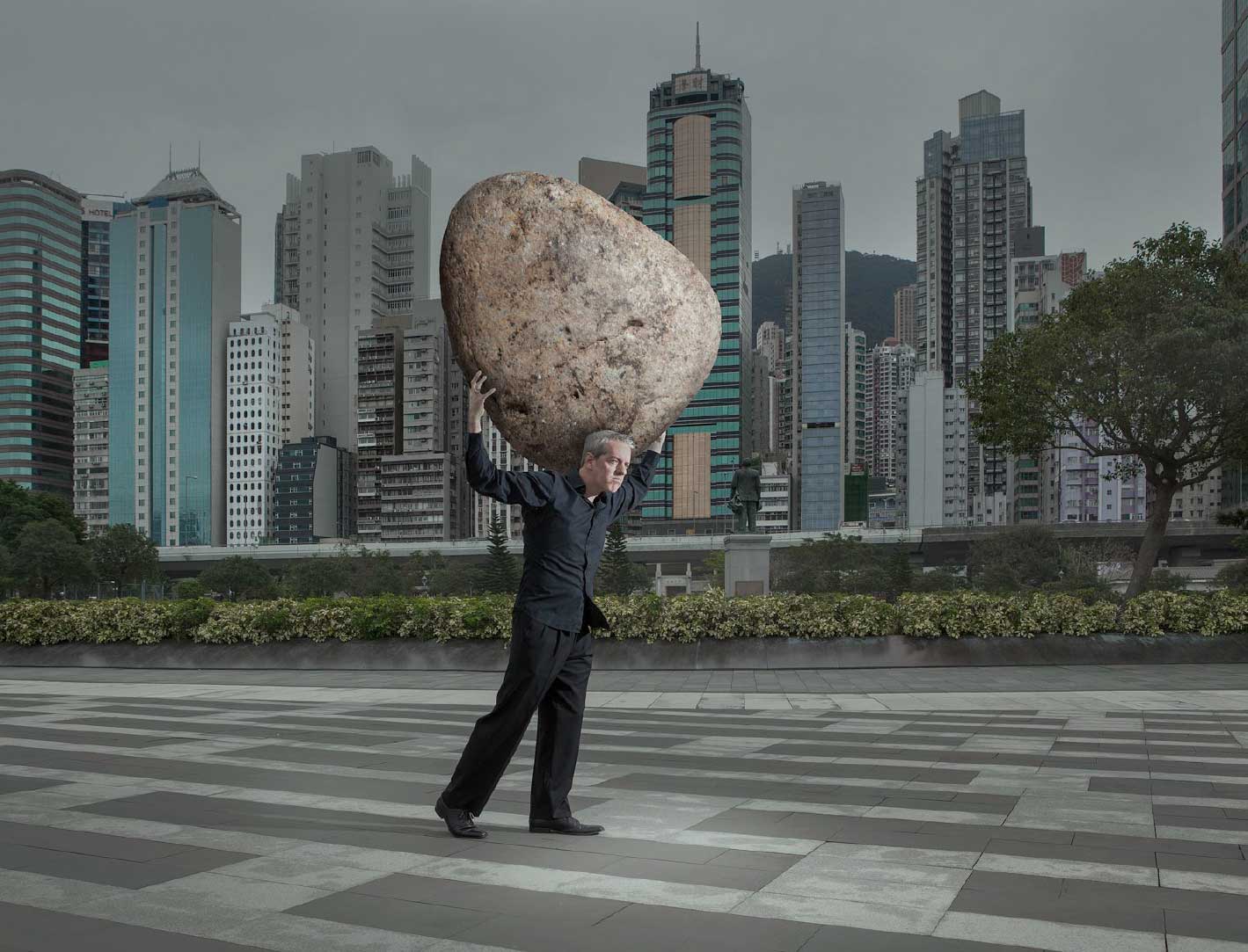 One in every four of us will struggle with mental health issues at some time, and FCC members Nic and Becky Gaunt decided to raise awareness of the issue in a creative and unique way. Kate Whitehead reports.

Fine art photographer Nic Gaunt and his wife Becky are hands down the club’s creative power couple. They have built a solid reputation for striking, edgy images and their recent Wall exhibition is no exception. Stones, a collection of 50 portraits that aim to raise awareness about mental health issues, is a deeply personal project.

“Hong Kong can be a very overwhelming and intense place, any feelings you have can be magnified,” says Nic. “Discussing mental illness here is more of a taboo than in the UK. I experienced this firsthand and decided to undertake this project to raise awareness.”

The British-born artist says he felt as though he had a huge weight on his shoulders, as though he were dragging a stone around all day. A strongly visual person, he wondered whether he could embody the notion in an actual physical stone. He shared his thoughts with friends. Some said that they had similar experiences, and so the idea for the Stones project was born. 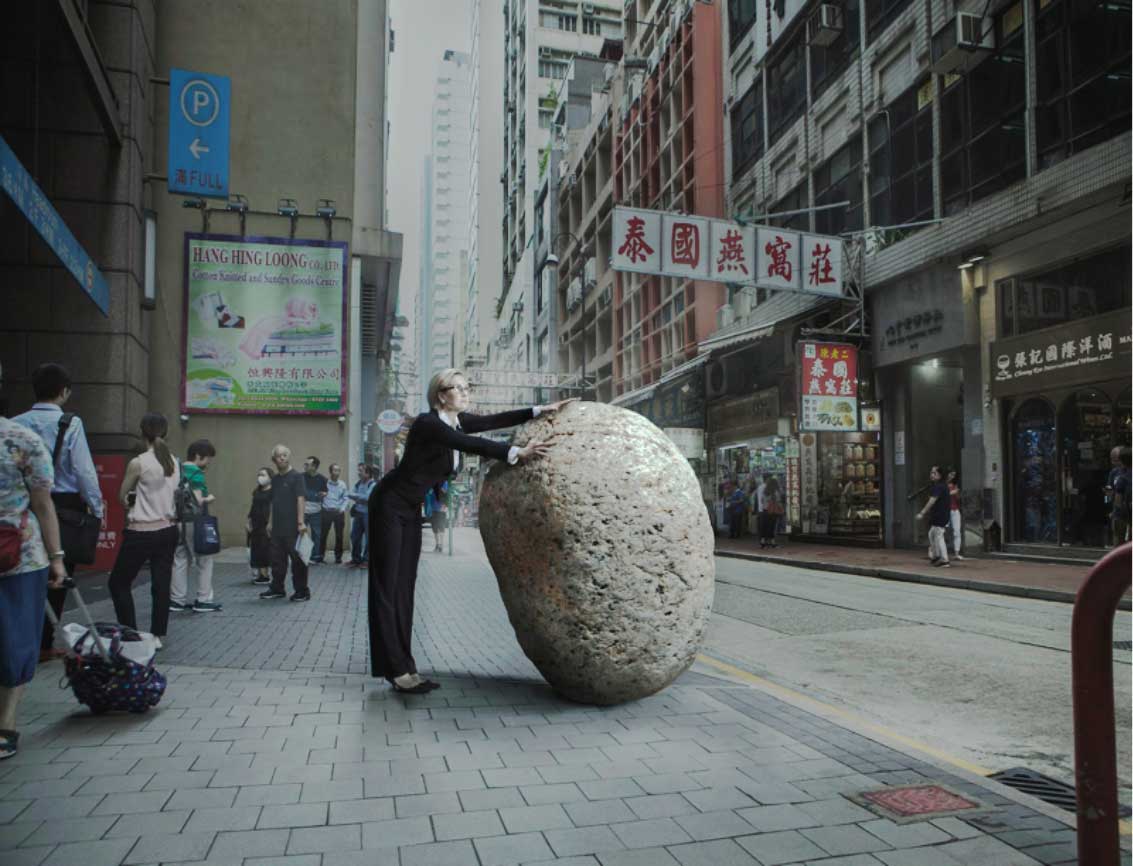 “A lot of people said they struggled or have friends or family who have struggled with mental health problems. They related to the idea. That was 12 months ago,” says Nic.

The project spread by word of mouth, as well as a social media call-out, and over the year Nic created 50 images. For some of those who posed for the photographs, it is their first public acknowledgement of a private struggle. Others are captured carrying a stone to represent the burden they share with a friend or family member.

The Club’s former general manager Gilbert Cheng is pictured leaning back against a huge rock on D’Aguilar Street, in Central. He wanted to join the project in the hope of helping remove the stigma around mental illness.

“We need to accept that we have among us people of all types of constitution and emotional threshold,” says Cheng. “We should educate them from a young age not to expect that life is a bed of roses, and that these beautiful flowers have fragrance but also thorns.”

For another Club member, Andrew Work, the premise of the project resonated with him. “Hong Kong is made up of many people, but when you are in your head, it can be a very, very lonely place. It weighs on you,” says Work.

The diversity of people who posed for the Gaunts shows that mental health issues are not bound by race, class or gender.

She also collected the stories of those featured and produced a book, The
Stone. Reading the personal, and often very raw and frank accounts of those pictured, makes the project even more powerful. These are people who are brave enough to stand up and say that they have struggled with a mental health issue – and by coming out Becky hopes that more people will feel comfortable about speaking up about their own struggles.

Ines Laimins, an actress, has featured in some of the couple’s previous projects and said she was keen to be involved with this one. “Everyone has struggled with something at some point, everyone can relate to this project in some way. [The Gaunts] take on projects that have a social impact, and I think this one, which brings mental illness into the open, is especially important,” says Laimins.

Those who volunteered to take part had seen the initial “Stone” images and many arrived at the shoot expecting to be pushing an actual rock. “One guy said, ‘Is it inflatable? Is it in your backpack?’” says Nic. 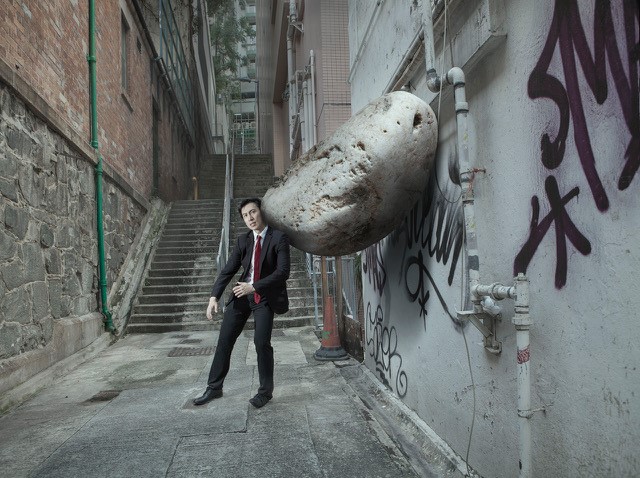 Rayve: “It is through awareness and empathy that we can actually help sufferers and make the world a better place to live.”

In reality, the stones are only a few inches big. Nic photographed the participants quickly on the street – just six or seven frames for each person – and shot the stones separately. He then used his digital darkroom skills to meld the two.

“It was a very time-consuming process, adding the shadows to make it look like the stone was really there,” says Nic.

Hongkongers’ mental health has deteriorated, with the ongoing protests adding to people’s stress. A study in October conducted by the Chinese University used the World Health Organisation Well-Being Index (WHO-5), with a range of between 0 and 100, and 52 as the passing score. An acceptable mental health level was between 52 and 68 while above 72 showed a good status. The study found Hongkongers scored 46.41, below the previous year’s score of 50.20, and well below the acceptable passing score.

The Gaunts hope that the exhibition will continue to travel after its introduction on the Club’s Wall, to help remove the stigma around mental health issues. According to the WHO, one in four people in the world will be affected by a mental health issue at some point in their lives.

This is not a commercial project for the Gaunts, they are only interested in raising social awareness and getting people talking. If you would like to display some of the images in your office or other communal area, please contact Becky at [email protected] If you would like to buy a copy of the book, The Stone (HK$500), please contact the Club’s reception desk. For more about the project go to www.nicgaunt.com

Kate Whitehead has lived in Hong Kong since she was seven. She is a journalist and author of two non-fiction crime books – After Suzie: Sex in South China and Hong Kong Murders. 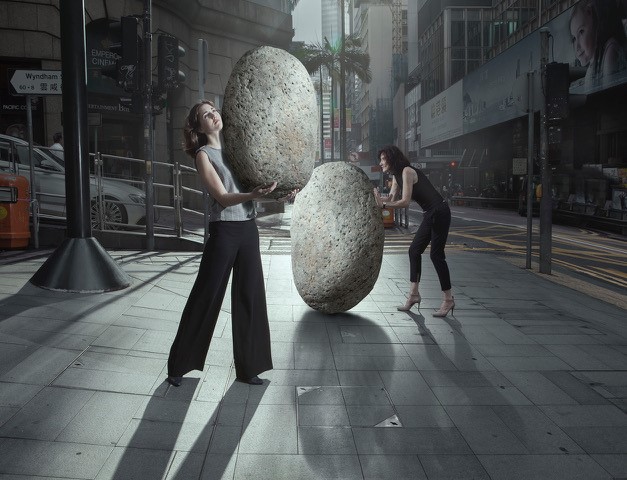 Brenda and Vivian: “It’s so important to raise awareness of a subject so many people turn their backs on. It’s also something many people don’t know how to deal with or how to process. In addition, anyone who has ‘the problem’ is often in denial and reluctant to get help.” 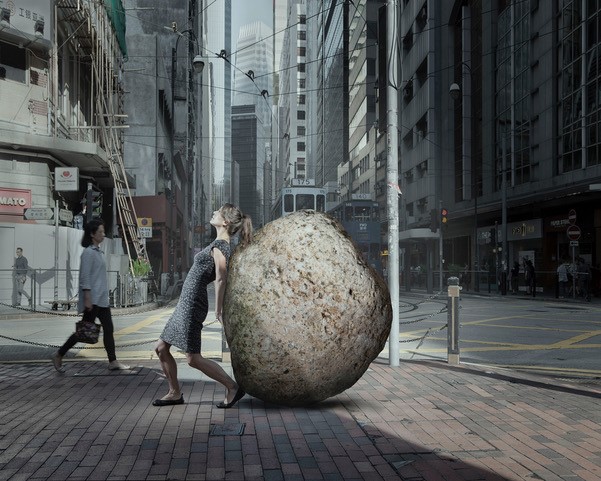 Carolyn: “I’ve known far too many people who have suffered in silence, been too scared to ask for help, or not got help when they tried. No-one should feel they can’t say anything about how they are feeling, and everyone deserves the support they need when they do. If you think a friend or a colleague might just need someone to ask them if they feel alright, then don’t hesitate. Ask them.” 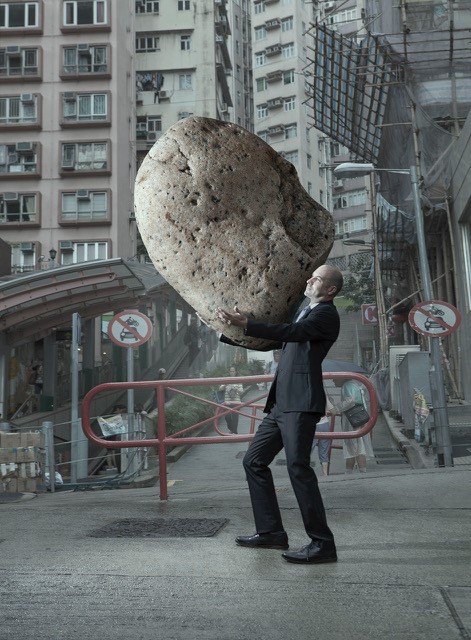 Christian:  “I have personally seen how mental health problems can destroy families, and lives. Most of the time it goes unnoticed and untreated until it’s too late. I remember my college roommate seemed like a happy healthy guy, until one Christmas Eve he was found dead, no one knew he was ill, no one knew he had stopped taking meds.”
We measure site performance with cookies to improve performance.