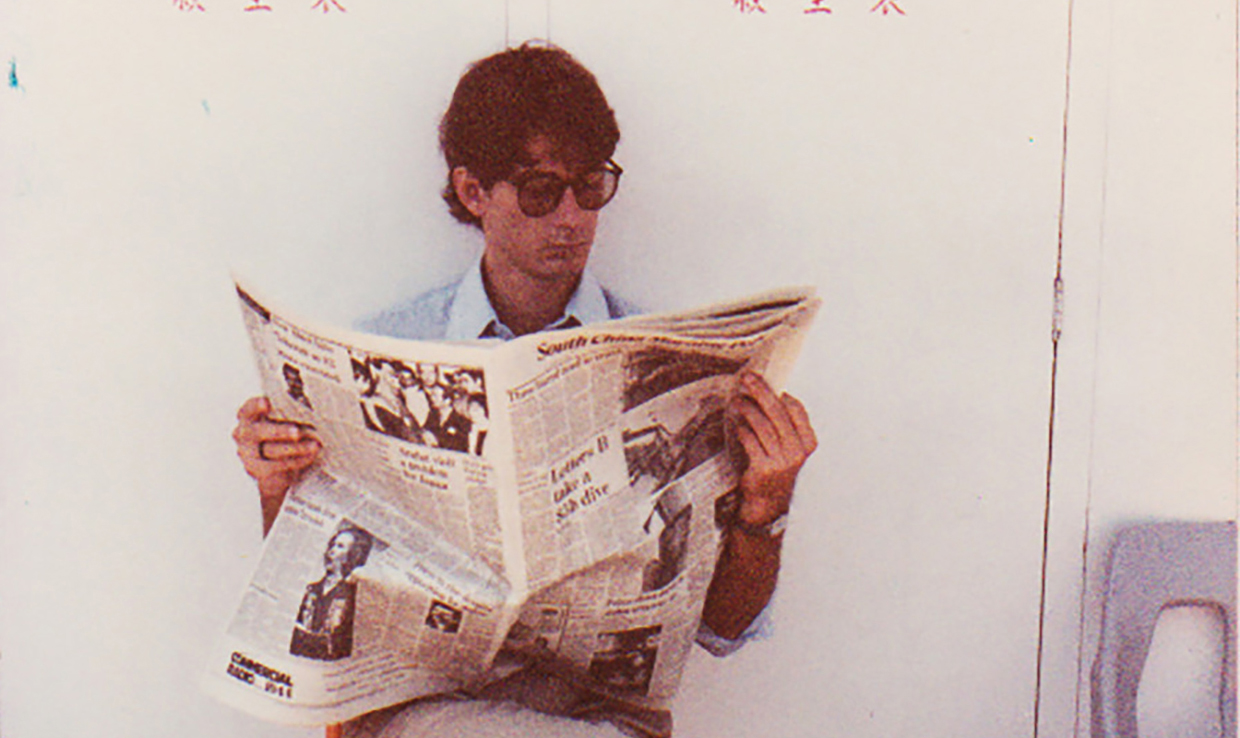 Paul Baran reads the SCMP on the Cheung Chau ferry in the 1980s.

Paul was initially a reporter and copy editor at the Vancouver Sun. Arriving in Hong Kong in 1980, he was a feature writer at South China Morning Post’s Sunday Magazine, and then freelanced for a variety of local and international publications, including the Asian edition of Business Traveller, Asia Travel Trade and Reader’s Digest. He returned to SCMP from 1983-1985 as the senior trade and finance reporter.

Paul also spent many hours hustling all comers in the FCC basement pool hall. In 1988, he was the Club’s 8 Ball Champion.

Paul also tried his hand at public relations with a brief foray into financial PR with start-up Media Dynamics Ltd before it was taken over by Edelman. Dealing with demanding PR clients, it seemed, wasn’t well suited to Paul’s freewheeling, independent approach to life.

He returned to his native Canada in 1999, where he continued working as a freelance business writer and was active as a volunteer in community projects. For a number of years, he helped organise the Kaslo Jazz & Blues Festival in British Columbia. Moving to Ladysmith, he was an avid boater and nature lover.

Paul’s conversations were always interesting, weird, stimulating. Sometimes all of those within the same story. He loved music, from Franz Schubert to Frank Zappa, and among favourite authors were Thomas Pynchon, Don DeLillo, David Foster Wallace, John Updike, John Cheever, and Patrick O’Brian.

One of Paul’s all-time favorite movies was It’s A Mad, Mad, Mad, Mad World — and, knowing Paul, this made perfect sense. He could quote many lines from it.

He was deeply intelligent, a trait that often surfaced in his sense of humour. Quips that initially appeared to have come out of left field were later found to have been delivered with the precision of a surgeon.

He cared deeply about people, inquiring about his friends’ fortunes every time he saw them. He asked often and, when they responded, he listened.

Paul Baran was an übermensch, huge-hearted, and a terrific journalist. He was passionate and playful, loyal and loving — to be Paul’s friend was a blessing, a gift. The world was brighter, lighter around him.

Paul is survived by his wife, Sue, a landscape architect who he loved with all his heart; he filled their life together with laughter and happiness. He was a very special person who touched the hearts of those around him and he will be truly missed by all his friends.