News The Correspondent On The Wall: Exiled To Nowh... 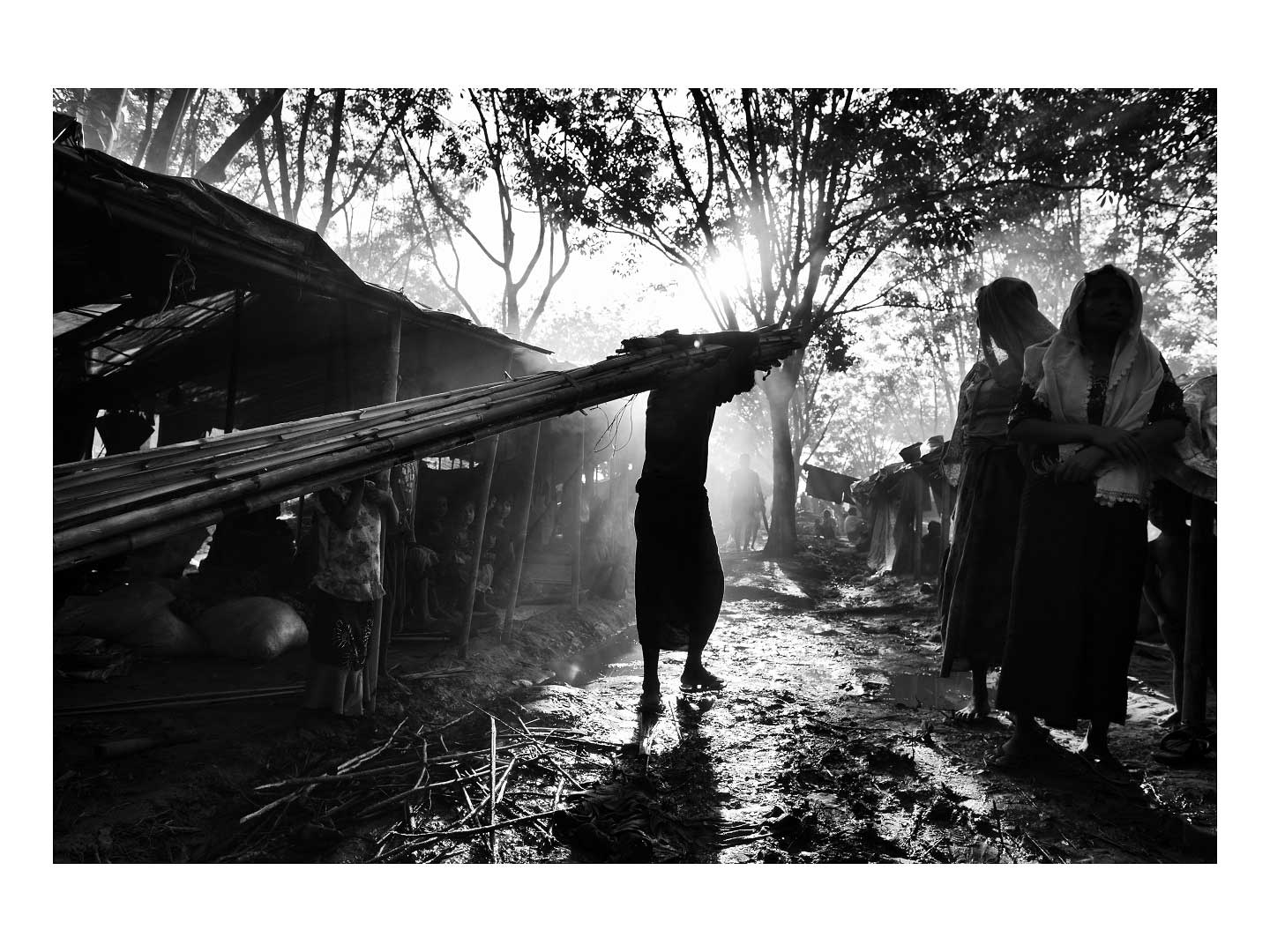 On The Wall: Exiled To Nowhere – Burma’s Rohingya

Over the past year, the Rohingya community in Burma (Myanmar) have been subjected to what UN officials have called a ‘text book case of ethnic cleansing’, while others have claimed it is just one more step in a genocidal process that has spanned decades.

A Rohingya man carries a load of bamboo which he will use to build his family’s hut. Photo by Greg Constantine.

This recent ‘scorched earth’ campaign by the Burmese authorities and members of the local Rakhine Buddhist community has destroyed hundreds of Rohingya villages, has resulted in the murder of thousands and has essentially eradicated the Rakhine State of the Rohingya by forcing 700,000 Rohingya out of the country and into neighbouring Bangladesh. It is the fastest and largest humanitarian crisis in the world today. 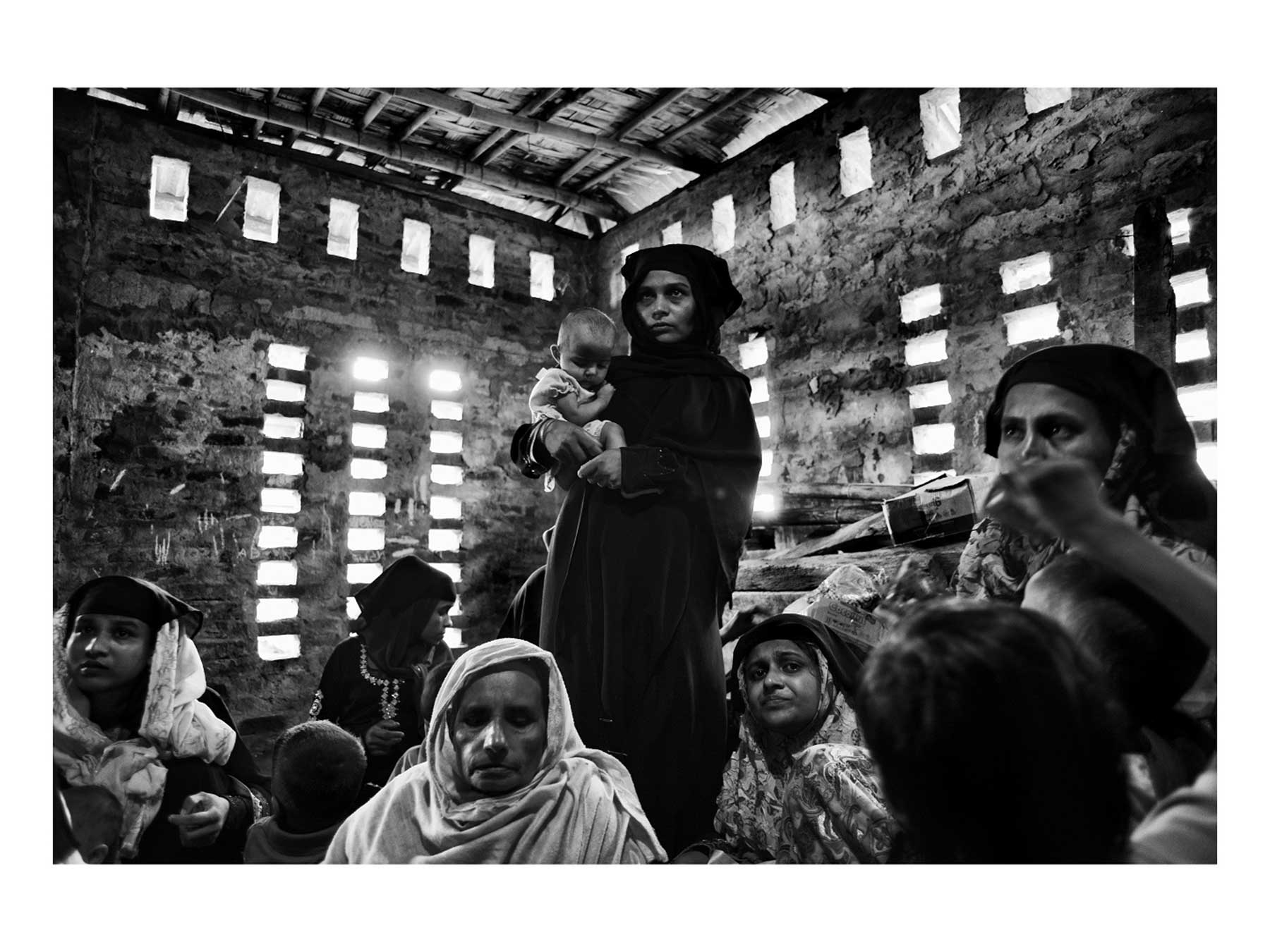 A Rohingya mother and child wait with other Rohingya to receive assistance at a makeshift medical clinic near the Kutupalong refugee camp. Photo by Greg Constantine.

While this wave of violence toward the Rohingya under the civilian-led government of the NLD and Aung San Suu Kyi follows decades of discriminatory policies targeted toward the Rohingya by successive military governments, little if anything is being done to hold anyone to account for the atrocities. 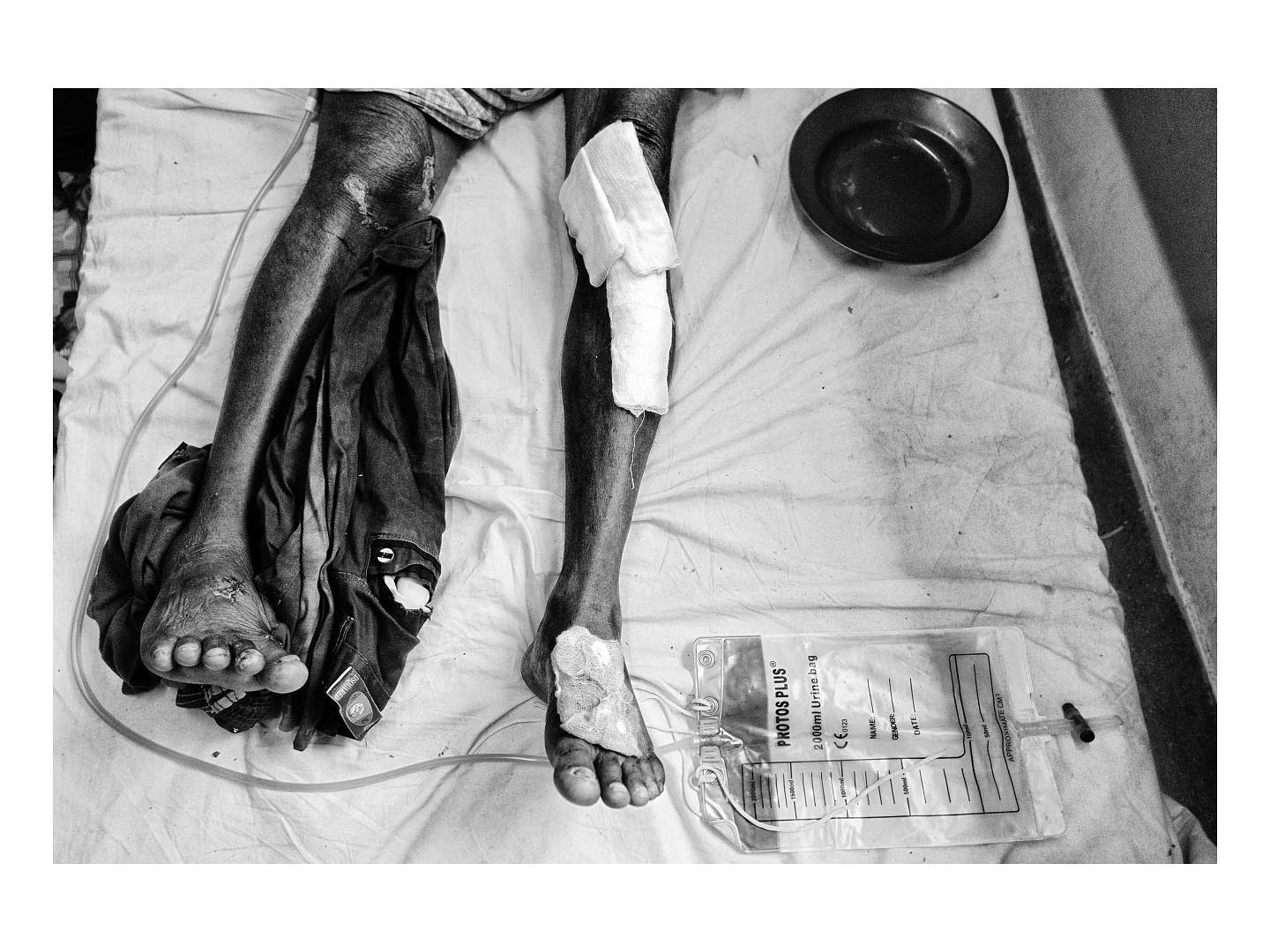 Sixty-year-old Hussein lay in a bed at the Cox’s Bazar Sadar Hospital. Shrapnel from helicopters attacking his village damaged both legs. Photo by Greg Constantine.

Photojournalist Greg Constantine has been documenting the persecution of the stateless Rohingya for more than 12 years. Since the publication of his acclaimed book, Exiled To Nowhere: Burma’s Rohingya in 2012, he has travelled inside Burma four times to continue documenting the plight of the Rohingya. The photographs on display at the FCC featured work created in Bangladesh in September 2017. Constantine dedicated this exhibition at the FCC to fellow journalists, Wa Lone and Kyaw Soe Oo. 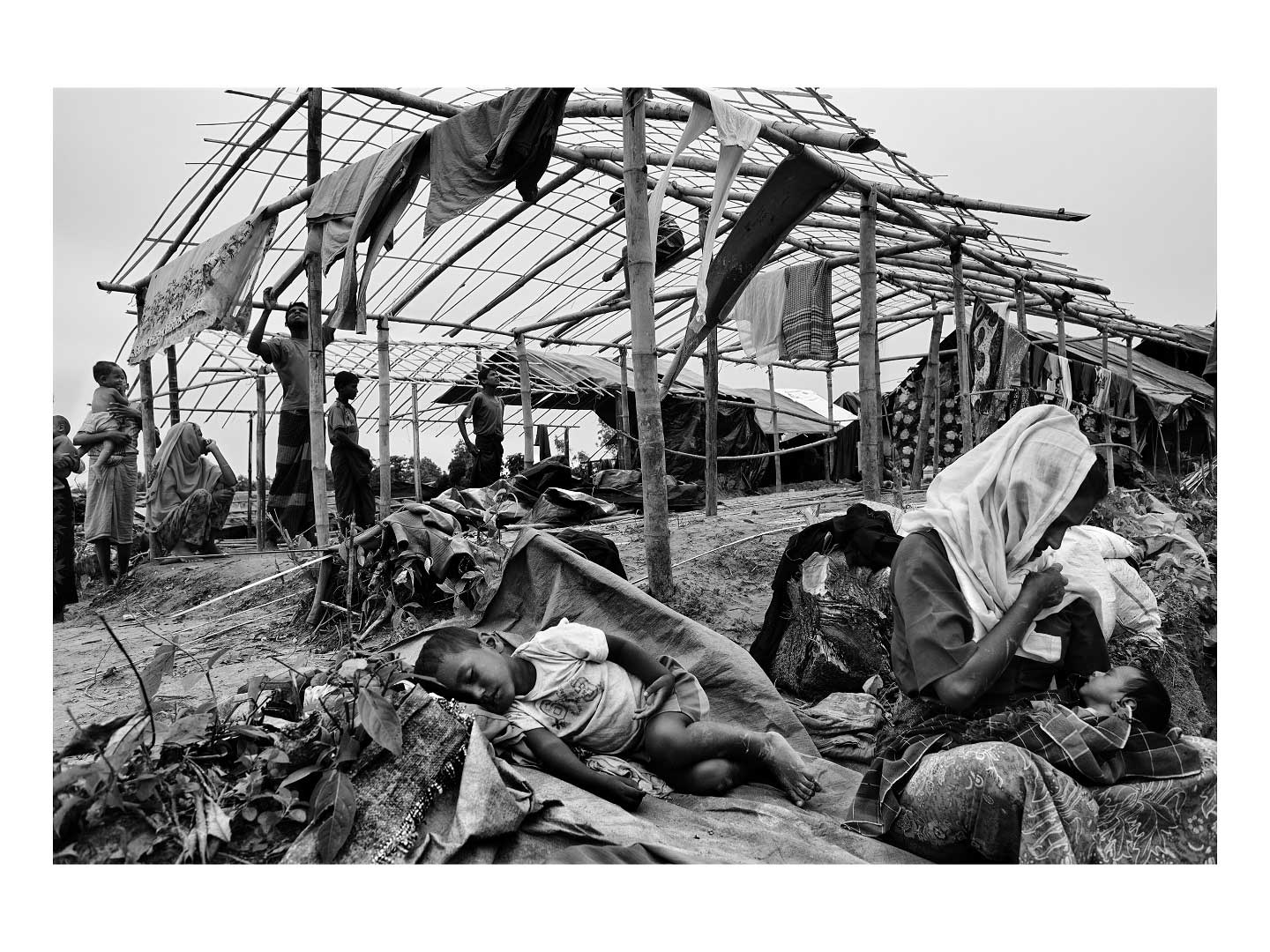 A group of Rohingya women wait for food assistance in the town of Shamlapur. Photo by Greg Constantine. 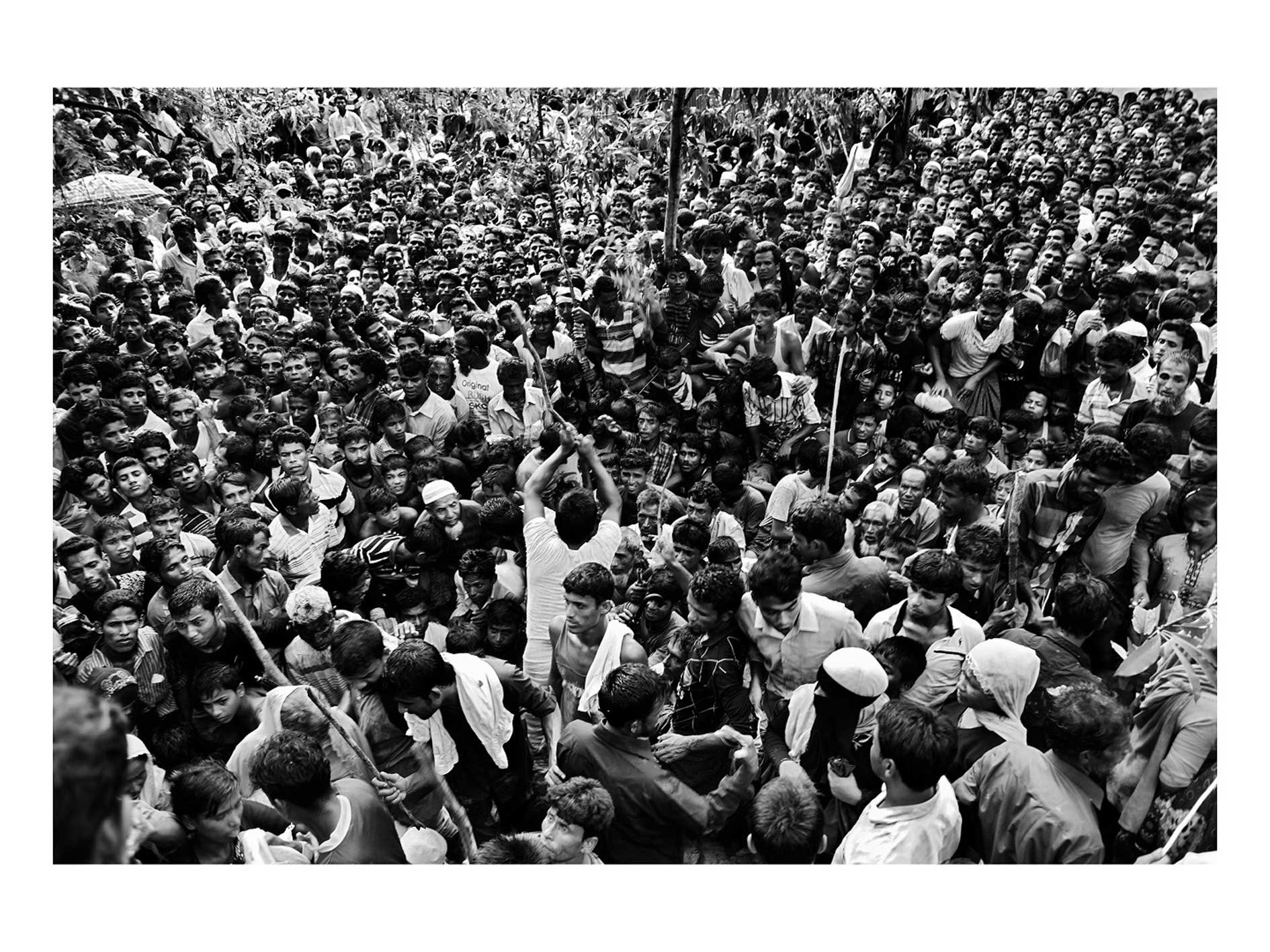 Hundreds of Rohingya men stand in line at a food distribution site and wait for humanitarian assistance. Rather than delivering relief, the trucks often served more as a magnet of desperation. Photo by Greg Constantine.
We measure site performance with cookies to improve performance.