News The Correspondent Outpouring of support for H... 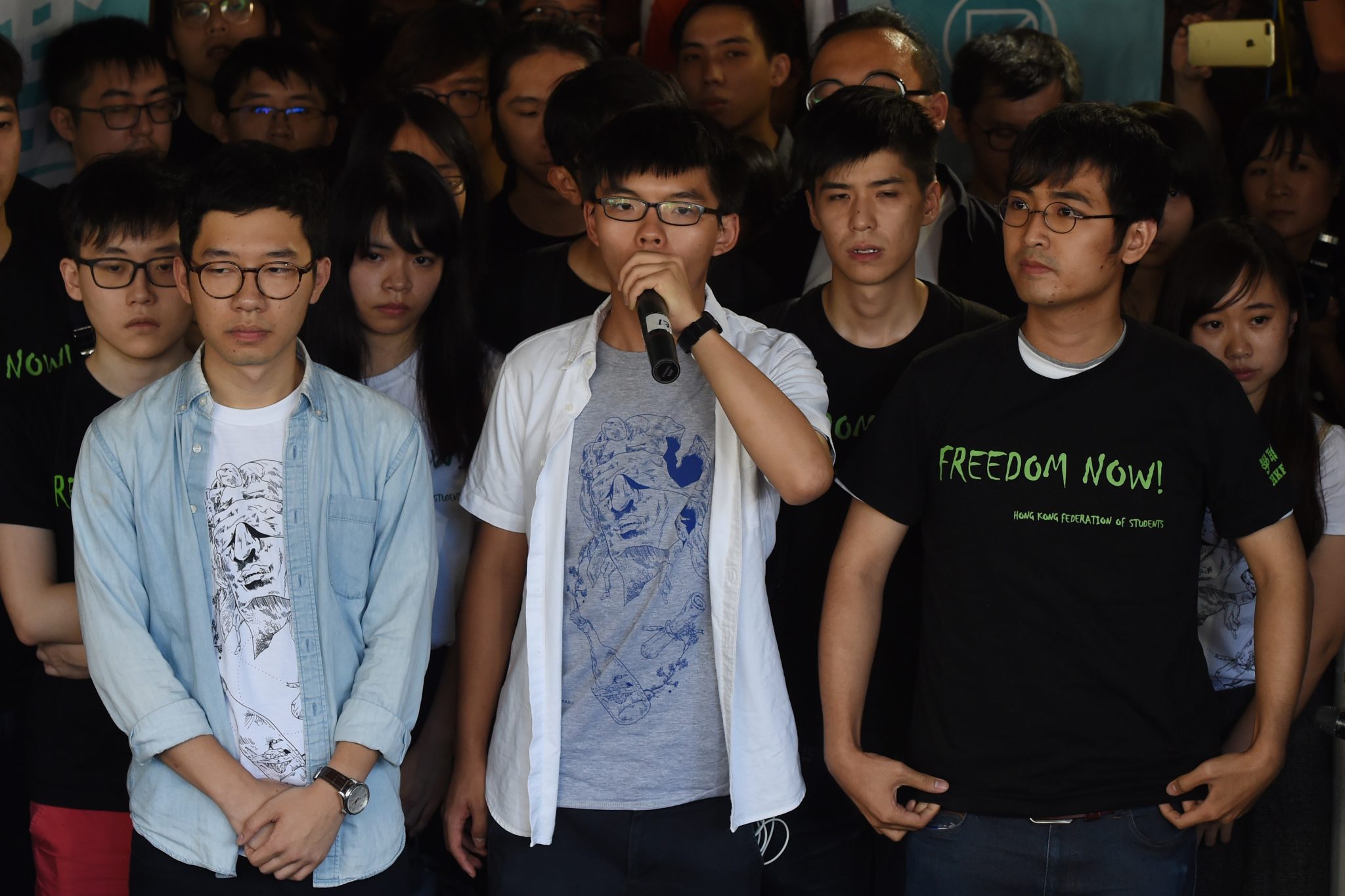 There has been a great outpouring of international and local support for Joshua Wong, Nathan Law and Alex Chow following their sentencing at the Hong Kong Appeals Court on August 17.

The following Sunday thousands marched – said to be the biggest protest since the 2014 Occupy movement – led by pro-democracy groups including the Civil Human Rights Front, League of Social Democrats and Demosisto.

Earlier, politicians from both sides of the Atlantic joined with Hong Kong-based rights groups, lawmakers, student leaders and pro-democracy groups in criticising the Hong Kong government, saying the appeals were political decisions intended to deter future protests and to keep young people out of elected politics.

However, the Hong Kong government has denied this, saying there was “absolutely no basis” to claims of political motives.

One of the strongest critics of the government is the former Governor Chris Patten, who in a letter to the Financial Times, said: “The imprisonment of Joshua Wong and two other leaders of the pro-democracy movement in Hong Kong is a serious error on the part of Hong Kong’s government. It will be very difficult to persuade the world that this does not represent a further deterioration in the quality of Hong Kong’s free and pluralist way of life.

“The responsibility for this deplorable decision rests clearly on the Hong Kong government’s shoulders. It decided — with the Secretary of Justice prominent in making the decision — to appeal against the non-custodial sentences passed on these young and brave democracy activists.

“It will be well nigh impossible to persuade Hong Kongers and the city’s well-wishers around the world that this was other than a vindictive move by the government to prevent these young men from being able to stand for election to Legco.”

Wong’s six-month sentence comes after having been tried and found guilty of unlawful assembly last year, and sentenced to community service. But in an unusual move the Hong Kong government, in the form of the Secretary of Justice Rimsky Yuen, appealed the sentence, arguing it was too lenient.

Law was sentenced to eight months, while Chow received a seven-month sentence. The sentences mean that they cannot stand for local elections in the next five years.

Two days before this public prosecutors also succeeded in revising the punishments for 13 activists involved in a protest at the city’s legislature against a development project in Hong Kong’s northeastern New Territories in June 2014. The 13, part of a wider group who in 2014 stormed Legco, were originally convicted of unlawful assembly and given 80 to 150 hours of community service by a lower court in 2016. Now they face jail for between eight and 13 months.

The deplorable decision will not of course curtail Hong Kong’s ambitions for greater democracy. It will surely have the opposite effect.

The Justice Department said in a statement released before the sentencing that “there is absolutely no basis to imply any political motive” on their part, and that freedom of speech is protected in Hong Kong. It added that the activists had shown “disorderly and intimidating behaviour”, and were convicted “not because they exercised their civil liberties but because their relevant conduct in the protest broke the law”.

In an interesting twist, it was rumoured that Hong Kong’s top prosecutors had initially “not recommended pursuing” the case further after the non-jail terms were handed down. This was overruled by Rimsky Yuen, who insisted on reopening the case.

The three Court of Appeal judges wrote in their judgment that the three could not say they were jailed for exercising freedom of assembly. “In recent years, there’s been an unhealthy trend in Hong Kong society. Some people use the pursuit of ideals… as an excuse to take illegal action,” Judge Wally Yeung wrote.

“This case is a prime example of the aforementioned unhealthy trend.”

One supporter of the court’s decision was from an unlikely source, the controversial columnist Alex Lo, who said that the three broke the law and should face the consequences.

In his letter Patten said that the apologists for the government’s decision will also have their work cut out to convince anyone that this is not a further example of Beijing tightening its grip on Hong Kong’s aspirations to remain a free society.

“The deplorable decision will not of course curtail Hong Kong’s ambitions for greater democracy. It will surely have the opposite effect,” he said. Wong, Chow and Law “will be remembered long after the names of those who have persecuted them have been forgotten and swept into the ashcan of history.”

In an open letter published a day after the sentencing, a group including the former Liberal Democrat leader Paddy Ashdown and the former UK foreign secretary Sir Malcolm Rifkind, criticised the ruling as “an outrageous miscarriage of justice [and] a death knell for Hong Kong’s rule of law and basic human rights”. The letter said “it was a dark day for Hong Kong and should be met with international condemnation”.

This letter was also signed by current and former UK MPs, former ambassadors from Australia and the US, a US Congressman; former Canadian MPs; a Malaysian MP and a human rights lawyer; a former Australian MP; and two former UK cabinet members.

Separately, the US Senator and one-time presidential hopeful Marco Rubio, who heads the Congressional-Executive Commission on China, said the “shameful” re-sentencing showed that “Hong Kong’s cherished autonomy is precipitously eroding”. He said the three and “other Umbrella Movement protestors are pro-democracy champions worthy of admiration, not criminals deserving jail time”.

Occupy Central co-founder and HKU law professor Benny Tai said he was “pessimistic” about his own case. “From the directions of this ruling, I think it likely I will go to jail.”

In March, Tai and his fellow Occupy founders – Dr Chan Kin-man and the Reverend Chu Yiu-ming – were charged for their roles in the pro-democracy street protests.The trio each face three counts related to causing a public nuisance. Each charge carries a maximum penalty of seven years in jail.

These selfless young people paid a personal price for the sake of social justice… and others like the middle-aged should also do their part.

Asked if he felt partly responsible for the young activists’ jail terms, Tai said: “Originally, my idea was that middle-aged people like us should bear the legal ­responsibilities of civil disobedience, but some young people asked ‘what about us?’

“Middle-aged people should feel ashamed. These selfless young people paid a personal price for the sake of social justice… and others like the middle-aged should also do their part.”

Just days later, pro-Beijing lawmaker Junius Ho called for the dismissal of Tai from his teaching post, saying that he is “unfit to teach” law at HKU.

The government’s vindictive pursuit of protesters who demonstrated their rights to free expression appears likely to continue as the Basic Law which enshrines these rights may well become irrelevant.

In Steve Vines’ cover story in this issue of The Correspondent on the likelihood that the anti-subversion Article 23 legislation will be tabled soon, he reflected on its impact on the Basic Law already under threat from China’s inclination to reinterpret the law for its own purposes.

While the Basic Law’s unequivocal pledge to “freedom of expression, of the press and of publication” should be reassuring “were we not in an era where the National People’s Congress Standing Committee seems so keen to ‘reinterpret’ the Basic Law and where China’s commitment to the pledges before [the handover] have been placed in question.

Even more so given that Chinese officials this year have said that “the Sino-British treaty for the handover of Hong Kong is nothing more than a historical document of no contemporary relevance”.

“No wonder people are so worried about what the pending Article 23 legislation will contain,” he said.