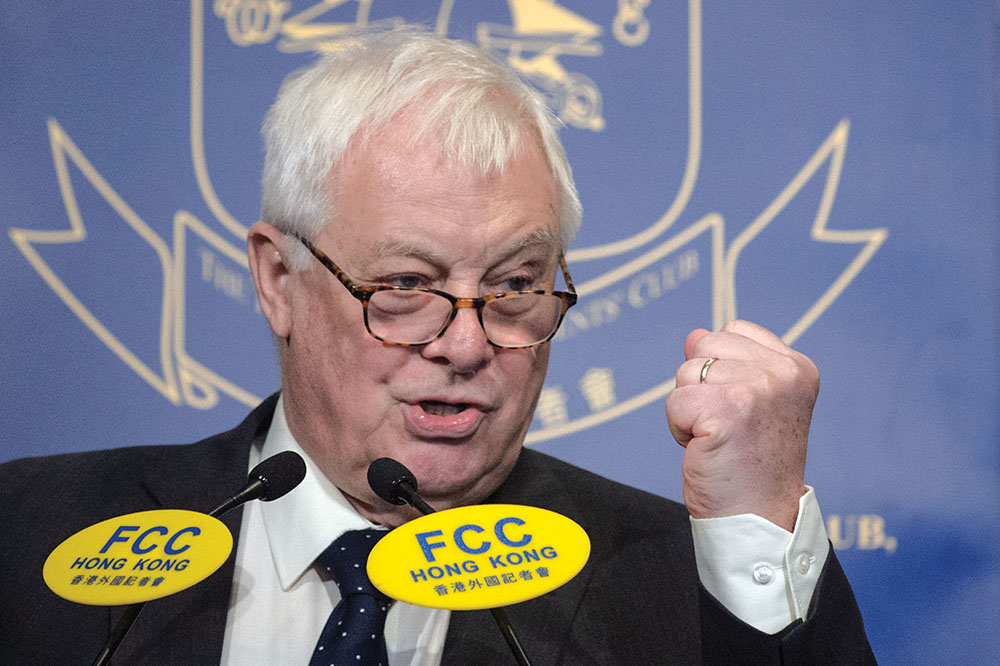 Almost 20 years after that rain and emotion-drenched night when Hong Kong returned to Chinese rule, the last colonial governor Chris Patten revisited his old haunts and proved as incisive, insightful – and newsworthy – as ever, as a sell-out FCC audience discovered. Jonathan Sharp reports.

According to the billing for his appearance at the FCC, Patten was going to give his views on what the world was like, and could expect, following this year’s two seismic electoral shocks, the UK’s pro-Brexit referendum vote and Donald Trump’s victory in the US presidential election. But if any of those who packed into the Main Dining Room thought that Patten was going to stick to that script and not hold forth on the fraught political environment in his old bailiwick of Hong Kong, then they were in for another shock.

In fact it was his trenchant views on what he termed the oath-taking “antics” in the Legislative Council by activists favouring Hong Kong’s split from China that made headlines, not just locally but also back in the UK.

Patten, who during his 1992-97 governorship sought to quicken the pace of political reform and was excoriated by Beijing as a “sinner for 1,000 generations”, emphasised that he remained as devoted as ever to the cause of full democracy for Hong Kong. He also admired the Umbrella Movement that blocked some Hong Kong streets for 79 days in 2014.

“Two years ago many brave young people in Hong Kong established moral high ground about democracy and governance. It would be a tragedy if that high ground was lost because of a few antics about so-called independence for Hong Kong.”

The antics he spoke of were the actions of young elected lawmakers Sixtus Baggio Leung Chung-hang and Yau Wai-ching, who were banned from taking their seats in Legco after giving their own colourful versions of the oaths at the swearing-in ceremony. They declared allegiance to the “Hong Kong nation”, unfurled banners that said “Hong Kong is not China” and Yau gave allegiance to “the Hong Kong special administrative region of the People’s Refucking of Cheena”, the last word, among others, deemed derogatory.  (The pair’s use of salty language is not confined to oath-taking ceremonies, as FCC stalwart Dr Feng Chi-shun reminded us in an opinion piece in the South China Morning Post. He also noted how, at a separate forum, an audience member got his own back at Leung Chung-hang by calling him “Lun Chung-hun” – Cantonese for “itching of private parts”.)

Patten said such actions by pro-independence localists – some of whom were in diapers or not even born when he checked out of Hong Kong in 1997 aboard the Royal yacht Britannia — were diluting, not strengthening, the support for democracy. They were making a mockery of a serious political argument. Independence for Hong Kong is simply not going to happen, so why waste energy, time and popular support by saying that it could come about? It was “dishonest, dishonourable and reckless” to conflate the drive for greater democracy with the argument for independence. Adopting what he called his “headmasterly” manner, Patten, who has been a frequent oath-taker in his marathon career in political and public service and is now ennobled as Lord Patten of Barnes, said: “Taking an oath is a serious business… it isn’t something of a lark.” Patten also told Agence France-Presse: “There are lots of people who agreed with them on democracy who won’t touch this stuff about self-determination with a barge pole.”

Understandably, the localists did not take Patten’s stern admonishing lying down. Leung told the Guardian that he and his Youngspiration party “respectfully disagreed with Lord Patten’s comments about the so-called ‘moral position’” of the 2014 protests, adding that the past two years had proved that a strong moral position yielded nothing “when you are negotiating with the immoral and authoritarian Chinese communist party”.

He was further quoted as saying: “If there is no legitimate election and political discussion, how can we even start our discussion on governance and democracy as advised by the very learned Lord Patten?”

Who loses under Brexit and Trump?

Lord Patten’s talk at the FCC made headlines both in Hong Kong and the UK.

The seemingly tireless 72-year-old Patten enlarged on this and many other themes at a succession of events during his Hong Kong visit. The day after his FCC appearance, he attended a Project Citizens Foundation forum entitled “Governance in Hong Kong: Are the Pillars Crumbling?” He said that during his career he had worked with several different bureaucracies – in the UK and Europe as well as Hong Kong.

“Without any question the most competent civil service that I worked with was that in Hong Kong in the 1990s. I hope it has not lost any of its vitality and morale since then.” The unequivocal response came from Anson Chan, the former Chief Secretary before and after Hong Kong’s handover to China, who told the forum in no uncertain terms that Hong Kong’s civil service had indeed gone downhill in many sad ways since she had been in charge.

Patten also said that his five years as Hong Kong governor were “the happiest years of my life”. And many Hong Kong people accord him a warm welcome whenever he comes back and gives us the benefit of his wisdom laced with dry wit. Which makes one wonder: how many other former governors of colonies, British or otherwise, are held in the same esteem in the territory they used to run as is Hong Kong’s last “colonial oppressor” – Patten’s joking term for himself?