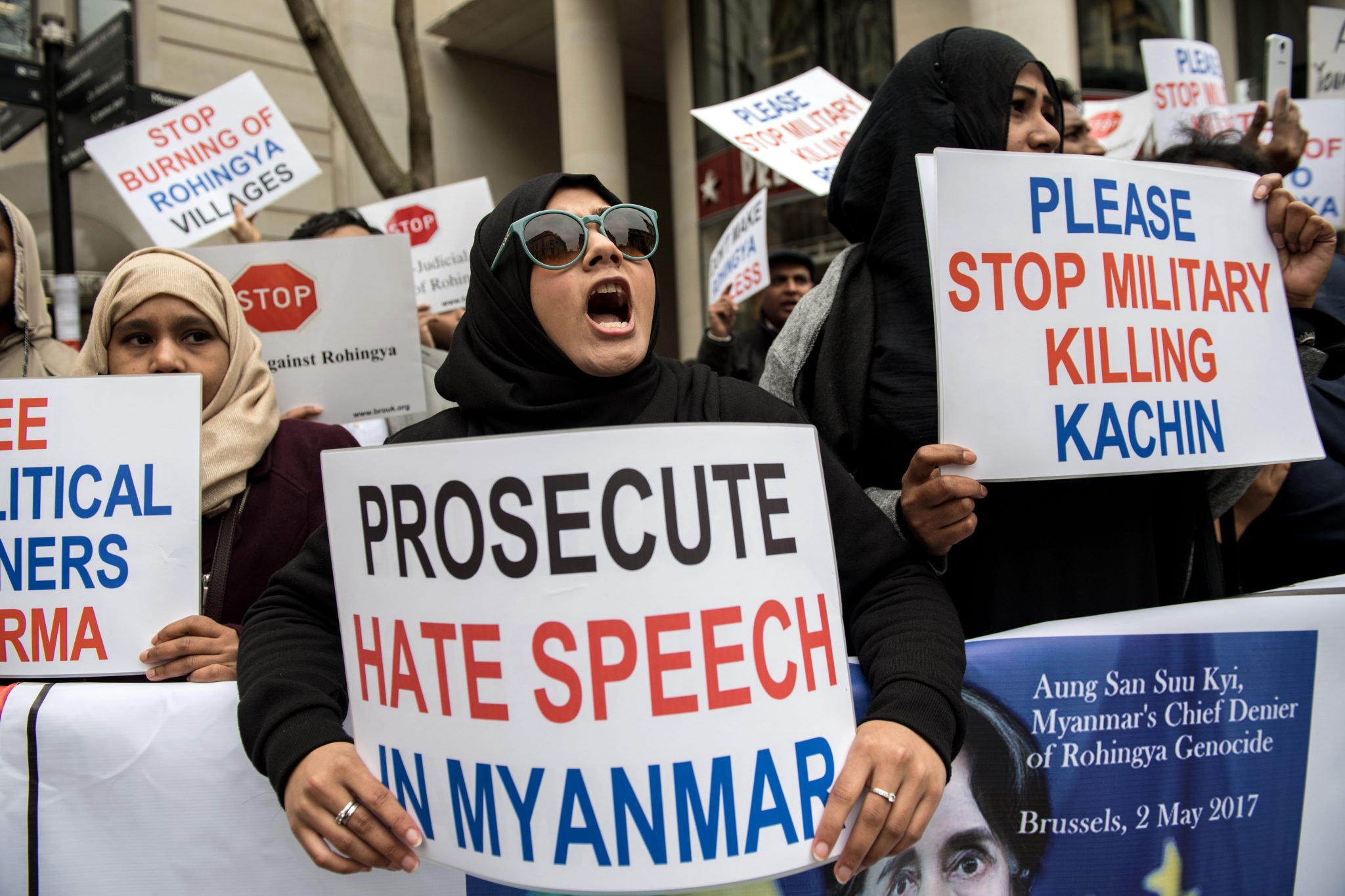 China’s harsh brand of media control has served as a role model for its neighbours south of the border where bright spots are hard to find, writes Luke Hunt.

Globalisation, the digital age and promises of democratic reform once inspired hope that a fresh era of press freedom was about to dawn across Southeast Asia. But two decades after the arrival of the Internet those hopes have dwindled amid deteriorating standards.

Underscoring this is the 2017 annual World Press Freedom Index, which highlighted Thailand, where the media industry is increasingly muzzled by a military government, and Cambodia where defamation laws have been criminalised to silence dissent.

Protesters hold placards and chant during a demonstration against Myanmar’s de facto leader Aung San Suu Kyi, as she attends an event at the Guildhall in the City of London on May 8. Photo: AFP/Chris J Ratcliffe

In compiling the index, Reporters Without Borders (RSF) noted: “The bad news is that media freedom is in the worst state we have ever seen,” adding that “media freedom has retreated wherever the authoritarian strongman model has triumphed.

“As we have reached the age of post-truth, propaganda, and suppression of freedoms, this 2017 World Press Freedom Index highlights the danger of a tipping point in the state of media freedom,” it said.

Analysts also said that countries like the Philippines and Indonesia, where press freedom had taken root, have also fallen foul of press watchdogs alongside Myanmar where an end to more than 50 years of military rule has not resulted in an end to the persecution of journalists.

“There are few, if any, press freedom bright spots in Southeast Asia these days,” said Shawn Crispin, Senior Southeast Asia Representative for the Committee to Protect Journalists (CPJ).

Some analysts have also argued that China’s rise and its sometimes brutal suppression of the media had set an example that was being embraced by its southern neighbours whether democratically elected or not.

The jailing of journalists under Suu Kyi’s watch will leave an indelible stain on her legacy as a democratic reformer.

“Hopes that the democratic transition in Myanmar would lead to more press freedom have been largely dashed as the elected government and still autonomous military use outdated laws to threaten and jail journalists,” Crispin said.

“It’s not what we expected under an Aung San Suu Kyi-led government and frankly she has been immensely disappointing considering her previous credentials as a pro-democracy icon. The jailing of journalists under Suu Kyi’s watch will leave an indelible stain on her legacy as a democratic reformer.”

He said there are rising concerns that the media curbs Thailand’s ruling junta initially put in place to consolidate their coup have been fully consolidated and would be hard to remove even if the country eventually moves back towards elected governance.

“Journalists who have stuck their heads up and criticised military rule have been consistently stomped down, particularly in the broadcast media,” Crispin added. “It’s a shame considering how far press freedom had progressed in Thailand to see it so easily and quickly reversed.”

Keith Loveard, a Jakarta-based analyst with Concord Consulting, said reporters in the region too often faced life-threatening challenges in exposing wrongdoing and abuse of power, arguably the most important roles of the journalist in any country.

Indonesia had improved on the 2017 World Press Freedom Index, up six places from 2016 to 124 out of 180 countries, the best performance for a Southeast Asian country, followed by the Philippines, Myanmar, Cambodia and Thailand rounding out the top five, all far ahead of China ranked a lowly 176.

But it noted growing concerns about the harassment of journalists by the security forces.

Despite the honourable protections offered by the Press Law, in reality reporting on Indonesia remains a potentially dangerous business.

Additionally, Indonesia’s Alliance of Independent Journalists recorded at least 78 cases of violence against journalists in 2016, compared with 42 in 2015 and 40 in 2014.

Loveard said most of these cases had gone unpunished and, most of the time, were not even seriously investigated.

“Despite the honourable protections offered by the Press Law, in reality reporting on Indonesia remains a potentially dangerous business. These attacks are just a part of the pressure on the freedom of the media that is often far more subtle.”

The scandal-plagued Malaysian PM Najib Razak at an Umno rally in May: only muted media criticism. Photo: AFP/Mohd Rasfan

He said much of the Indonesian media was guilty of being entrapped by patronage systems which are deeply embedded across Southeast Asian societies where “envelope” journalism is rife and too many reporters use their jobs for access to powerful figures and the opportunity to create side deals that are far more lucrative than their official roles.

“There remains a strong culture of immunity for the military and the police in particular and many other powerful figures assume that they are immune from investigation, so it requires considerable nerve to probe into the darker regions of Indonesian life.”

Elsewhere in the region, Vietnam and Laos remain journalistic backwaters governed by communists and were classified as Black Spots by the RSF, while Brunei has raised concerns with the institution of Sharia law.

Singapore is still stymied by its inability to cope with any form of criticism, highlighted by Prime Minister Lee Hsien Loong’s recent threat to sue his own siblings for defamation amid a family squabble.

In Malaysia, the scandal-plagued government of Prime Minister Najib Razak has faced only muted criticism, benefitting enormously from a press establishment that rarely deviates from the wishes of the long ruling United Malays National Organisation.

The election of President Rodrigo Duterte and his anti-drug policy has made the job of journalists more difficult.

Longtime correspondent and former FCC president Karl Wilson has focused on the Philippines for decades and says corruption is now endemic at all levels and more journalists have been killed in direct relation to their work there than anywhere apart from Iraq and Syria.

“The election of President Rodrigo Duterte and his anti-drug policy has made the job of journalists more difficult. The outspoken former mayor of Davao does not like journalists and has made that fact clear on a number of occasions,” he said.

Wilson said international media organisations like to say that 90% of cases in which journalists have been murdered since the fall of Marcos have been solved.

Still, that is hardly comforting and heavily mitigated by the 2009 Maguindanao Massacre when 58 people, almost half of them provincial journalists, were murdered allegedly by the Ampatuan family.

“Since then there have been three presidents who have promised swift action but in the end nothing. Witnesses have been murdered and the case against the Ampatuans has hardly moved,” Wilson said.

Protesters carry anti-martial law banners as they gather outside the House of Representatives in Manila in July: only in Syria and Iraq have more journalists been killed. Photo: AFP/Vincent Go

“It would have been a totally different story if this had happened in Australia, US or Britain. Why should our colleagues in the Philippines be any different?”

Foreign correspondents are also complaining that they are more often being subjected to the same scrutiny and pressures as local reporters.

Foreign journalists have rarely been subjected to the same restrictions as locals because correspondents had little impact on local readers and voters, thus remaining off the radar of the authorities.

However, this is changing for journalists who report in English due to the overarching influence that language has had across the Internet, which is increasingly responsible for shaping public opinion and influencing political thought.

Loveard said responsibility for this lies as much with media proprietors as it does with reporters in the field, regardless of the language and market they serve.

“There are of course many exceptions but there is still a long way to go, not least in the area of training,” Loveard added.

“What is more constraining is the domination of the media industry by powerful business interests who have zero understanding that ownership does not necessarily mean total control of editorial policies and biases.”