News The Correspondent Reciprocal Clubs: A look at... 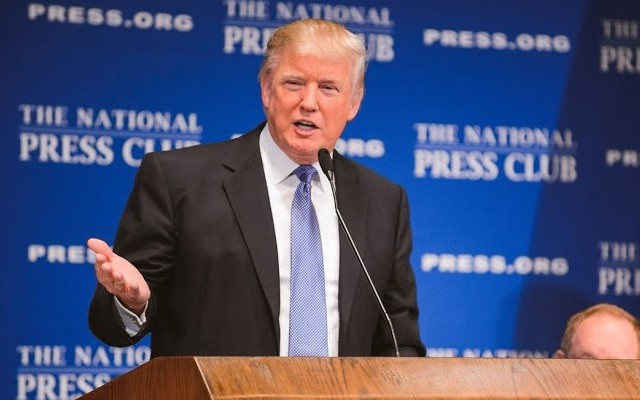 Reciprocal Clubs: A look at our partner press clubs around the world

The FCC Hong Kong has a long list of clubs around the world with which we have reciprocal arrangements.

Members are welcome at clubs for bankers, doctors, golfers, sailors, swimmers, rugby players, cricketers and aviators – a diversity of pursuits reflecting the interests of our own membership. Many of these affiliations were arranged by FCC stalwarts with social or professional connections to what are now partner institutions.

Not surprisingly, however, press clubs and associations comprise the largest body of affiliates. We are currently linked to a total of 36 in Asia, Australasia, Europe and North America.

Donald Trump at the National Press Club during his election campaign.

That’s the good news. The bad news is that more than a third of those organisations – for financial, political or other reasons – are unable to maintain clubhouses, so while their members are able to drop in on us, we can’t drop in
on them.

Many press organisations without premises, or with only an office, organise gatherings in bars, restaurants and other meeting places, and FCC members from Hong Kong who get in touch in advance will often be welcome to join them.

In Singapore, for example, where the FCC has reciprocal arrangements with no fewer than six clubs, four of which do have their own facilities, it might still be socially or professionally useful to get in touch with the two that don’t. The Foreign Correspondents’ Association (Singapore) and the Singapore Press Club both organise lively programmes of events for members, and are addressed by visitors of the same calibre as those at our speaker lunches.

The Foreign Correspondents’ Club of Thailand.

Albeit currently without a home, the FCA Singapore has been in existence almost as long as the FCCHK. Founded in 1956, it was, as the history on its website proudly notes, at an FCCA lunch in 1961 that that “then-Malaysian Prime Minister Tunku Abdul Rahman first mooted the idea of a ‘union’ of Malaya, Singapore and the North Borneo dependencies”.

Some of our professional reciprocals, of course, have been around for a good deal longer. Vienna’s Presseclub Concordia, founded in 1859, claims to be the oldest press club in the world, and the United States’s National Press Club in Washington was established way back in 1908.

Both of those do still have their own clubhouses. Some other historic journalists’ clubs have been less fortunate.

The London Press Club, founded in 1882, managed to stay in its off-Fleet Street premises in Wine Office Court for more than a century, but now operates as an association with just a London office.

The nearby Wig and Pen in The Strand – a meeting place for journalists and lawyers from 1908 – was an FCC reciprocal club until it closed after 95 years in 2003. The building, which dates back to 1665 and survived the Great Fire of London the following year, still stands. Last time I passed it was a Thai restaurant. It’s the sort of fate that gives one pause for thought every time our own lease comes up for renewal.

Fortunately the gap left by those two in London has been filled by the Frontline Club near Paddington railway station. It offers accommodation at very reasonable rates for London, and is within easy walking distance of the Heathrow Express. It’s the nearest thing in London to the FCC socially, and well worth dropping into even if you don’t decide to stay there.

There are reciprocal press clubs you can physically visit in many of the world’s major cities, some of which are fairly straightforward media facilities providers, and some of which also have a more social aspect.

An event at the Press Club de France in Paris.

Indeed many FCCHK regulars have at various times been members of one or another of those clubs as well. The late Diane Stormont, whose photograph looks down over the east end of the Main Bar, was a past president of both the FCCHK and the Seoul Foreign Correspondents Club.

In addition to our fully fledged reciprocal arrangements with overseas press clubs we are more loosely affiliated with all members of the International Association of Press Clubs, established in 2002, of which the FCCHK was a founder member.

Although many of our reciprocal clubs are also members of the Association, we are not automatically entitled to the use of the facilities of those which are not – although Journalist and Correspondent members wishing to gain access to some of them may find their FCC membership helpful when applying. It’s good to have connections.