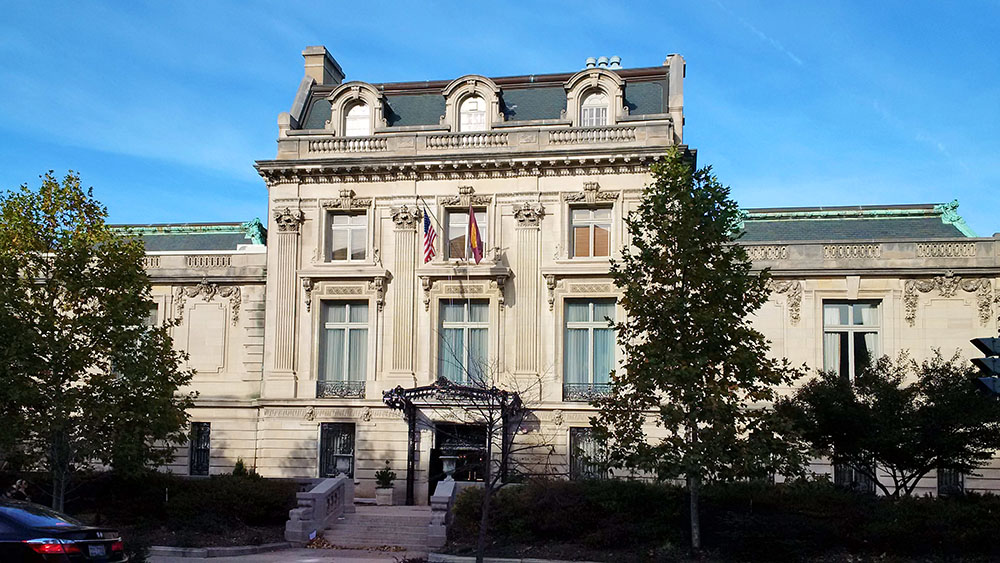 The Cosmos Club in Washington.

What better place could there be for an FCC member in America for the election to spend the night than the Cosmos Club in the nation’s capital?

Another visiting member, I saw on social media, scored tickets to New York’s Javits Center for the modestly (it seemed at the time it was announced) advertised “Hillary for America Election Night Event”. Her opponent invited supporters to a `Donald J. Trump Victory Party’ in the Midtown Hilton in the same city.

But having taken half a day to go to Virginia for a Trump rally and the security and waiting that involves, I was happy to watch the late results on a big screen like members back in Hong Kong, at a club whose members have included three US presidents and a dozen Supreme Court Justices. William Taft, the only person to have been both, is described beneath his portrait as a Cosmos Club member from 1904-13, and as a lawyer.

Like the FCC, the club’s members you’ll meet will regale you with stories about characters on its walls like Taft, or how Eleanor Roosevelt had stayed in the clubhouse when it was a private home before her husband’s first inauguration, or how they were in Italy after the Second World War and the plan was to hold the line against advancing Soviet forces at the Brenner Pass.

Like the FCC, the club’s members you’ll meet will regale you with stories about characters on its walls like Taft or Henry Kissinger…

Like the FCC, the club’s current Embassy Row home isn’t its first. That was Lafayette Square, by the White House. If you can’t score a stay at that residence’s Lincoln Bedroom, you won’t be disappointed with the mansion rooms of the Cosmos Club, whose rates including breakfast for reciprocal members start at just US$233.

Of course you have a copy of the Washington Post, New York Times or Wall Street Journal with that. If you want to pick up the Financial Times, that’s available at the National Press Club downtown, where I recommend lunch at their members’ bar “The Reliable Source”.

FCC members in Washington should also visit the Newseum while in town too. Like our club, that institution is an ode to and hopefully not a funerary celebration of the romance, rigors and responsibilities of journalism.

Which brings us back to why all of us will feel at home at the Cosmos Club. To be admitted as a member, you must be a person of distinction, character and sociability who has done meritorious original work in, or be well known to be cultivated in science, literature, the arts, a learned profession or public service.

I doubt I’d make the cut, so staying there for one of the most momentous weeks in a while was great. Needless to say the staff there are wonderful, there’s a small, tucked-away seemingly barely used gym, and your friends in town will all enjoy calling on you there.