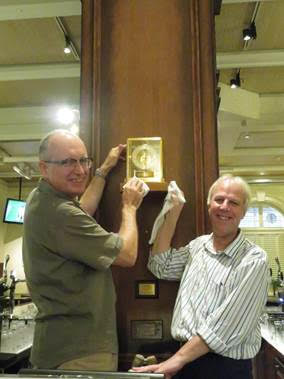 Carsten Schael and John Batten with the newly-installed clock.

Long-term FCC member, the late Walter Kent, will be remembered for his punctual time-keeping now that part of his bequest to the club has been put in its rightful place, at the Ice House Street end of the Main Bar.

It was Walter’s favourite drinking spot and an obvious choice as the permanent home of the Jaeger-LeCoultre clock that Walter, who died in 2016, received as a 25th anniversary gift for working at Chase Manhattan Bank.

“It is a fitting memorial for one of the FCC’s most loyal recent members,” said John Batten (pictured right being helped by Carsten Schael) when they fixed the clock to the Main Bar in August.