News The Correspondent Signs of the times: A look ... 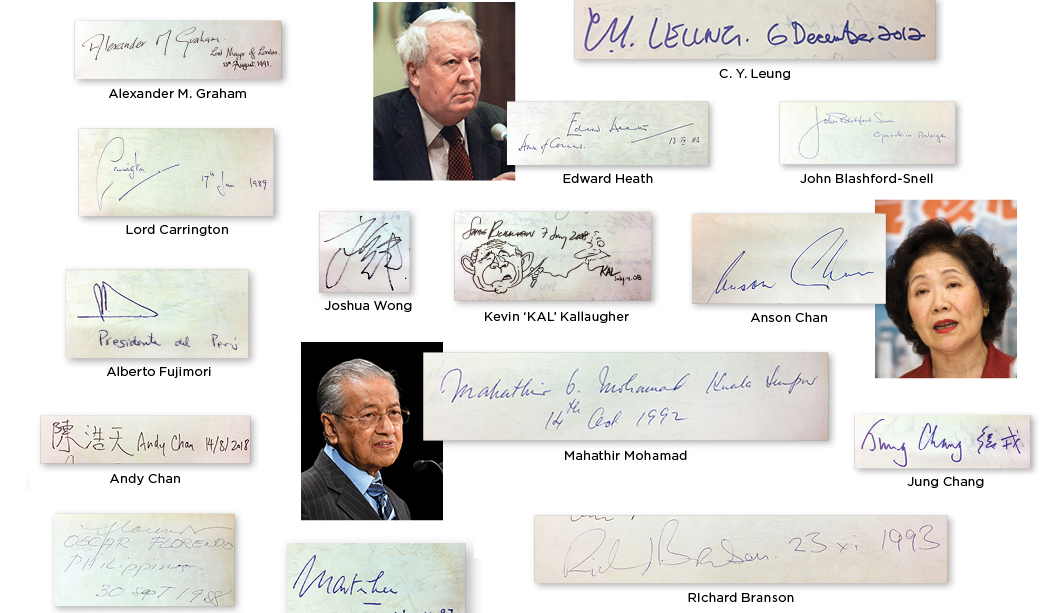 Signs of the times: A look at the famous figures who have signed the FCC visitors book

Some FCC guests leave barely a mark. Others, it seems, don’t want you to ever forget they were there. After 36 years, the Club’s guest book is full, so George W. Russell flicked through the pages to chronicle the passage of visitors. 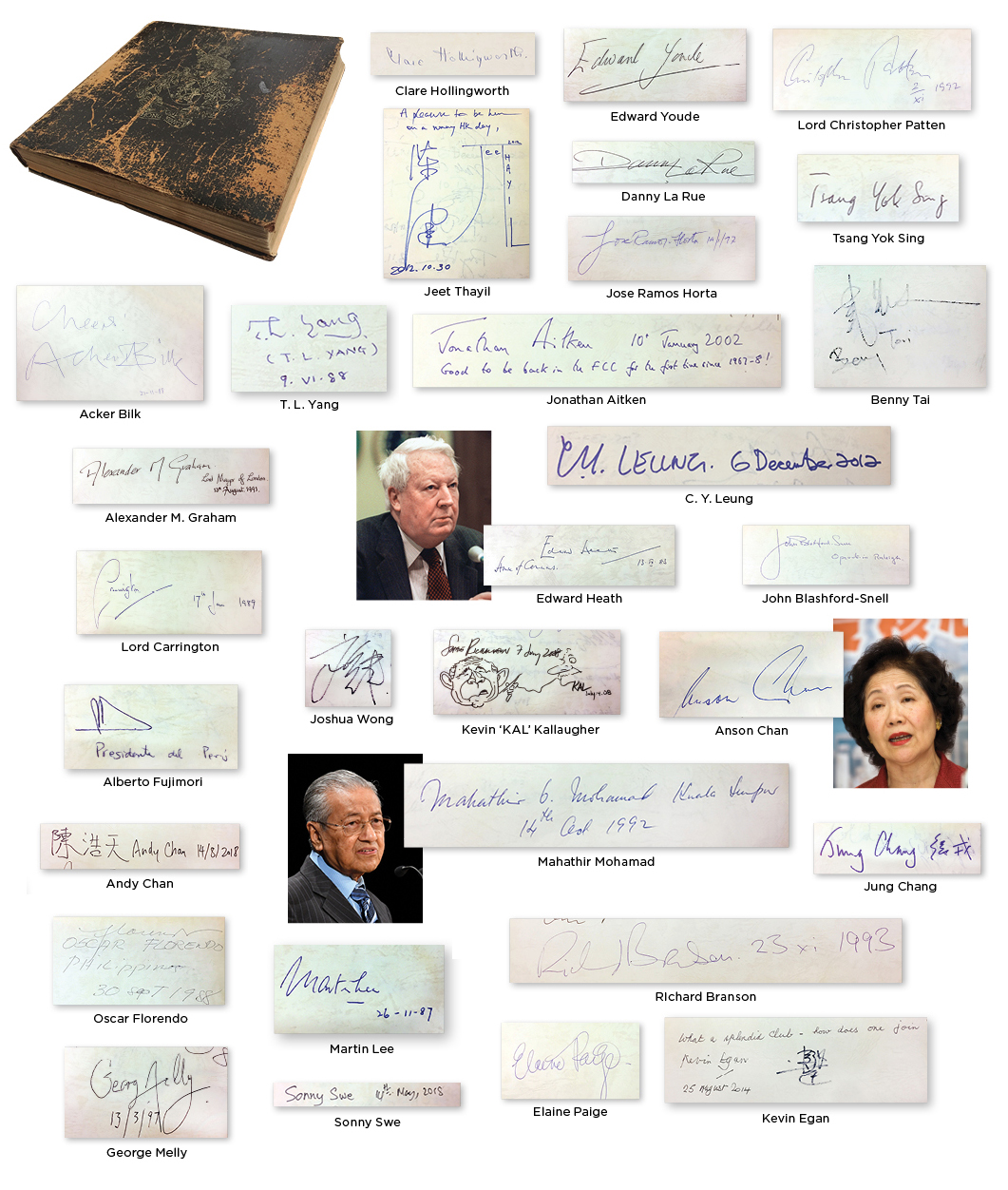 The FCC’s guest book is full of famous names – some infamous.

From bureaucrats to burlesque stars, senators to snooker players, the lunch – or dinner, or even breakfast – guests have been a mainstay of the FCC’s activities since it opened its doors. Many visitors, from the exalted to the ordinary, have been invited to sign their names in a brown, leather guestbook embossed with the club’s logo.

The first page was turned the same day as the FCC turned over a new leaf in the Lower Albert Road premises back in 1982, with then governor Sir Edward Youde leaving his imprimatur. Now, 36 years later, its pages are full and the club is deciding whether – and how – it should display this unique historical document that chronicles both the club’s life at 2 Lower Albert Road and Hong Kong’s history nearly two decades either side of the handover.

Some of our guests had high drama either behind them – the third Baron Lindsay of Birker, visiting in 1989, had been born in a cave while his parents (the second baron and his Chinese wife) were fleeing the Japanese as part of Mao Zedong’s Communist volunteer regiments during the Chinese Civil War – or regrettably, in front of them, such as Philippine Brigadier General Oscar Florendo, who visited in September 1988 and was fatally shot resisting a coup attempt against President Corazon Aquino in 1990.

Some guests were less heroic. Australian artist-entertainer Rolf Harris – a visitor in the 1980s who filled an entire page of the guest book with his distinctive sketches – would be later imprisoned on charges of indecent assault of teenage girls. Other jailbirds have included former British MP Jonathan Aitken (sentenced to 18 months for perjury in 1999) and Jeffrey Archer (sentenced to four years for perjury in 2001). Australia’s Alan Bond, a hero for bankrolling the America’s Cup yachting win in 1983 and a visitor to the club afterwards, served four years in prison for deception.

For the most part, the 1980s saw a parade of Hong Kong bureaucrats signing in – commissioners of tax and excise and the odd cabinet secretary. But leavening their presence was a horde of sportsmen (and they were mostly men). Australian rugby coach Alan Jones visited in 1984 and cricketer Tony Greig in 1988, while stars of the green baize that visited the FCC several times included former world snooker number ones Steve Davis and Cliff Thorburn.

As well as light entertainment, there were political heavyweights. Former British prime minister Edward Heath visited in 1983, and former foreign secretary Lord Carrington in 1988. Few serving heads of government have had the time to visit the FCC during their term of office, except for Hong Kong governors and chief executives like Youde, Chris Patten (several times), Donald Tsang and CY Leung. Murray MacLehose, governor from 1971 to 1982, signed the guest book in April 1992, well after leaving office.

Among international leaders, the club managed to snare Alberto Fujimori while he was president of Peru in 1991, Suleyman Demirel as president of Turkey in 1995 and Mahathir Mohamad as Malaysia’s prime minister in 1992, when he was a youthful 67 years old. Gloria Macapagal Arroyo visited as president of the Philippines in 2001. East Timor leaders Jose Ramos Horta (1997) and Xanana Gusmão (2001) both visited before their country’s independence in 2002.

Of course, the club has a history of holding the powerful to account, and a tradition of free speech. Many visitors have been welcomed to the club despite being unpopular with their home governments. Chinese dissident Liu Binyan, who spent more than two decades in Chinese labour camps, visited in 1989. Lau San-ching, the Trotskyist agitator who was both anti-Beijing and anti-British, was a guest in 1992, seemingly without incident. Several other thorns in the side of government followed in the next generation, including Benny Tai in 2014, who added “Occupy Central with love and peace” to his moniker, Joshua Wong of Demosistō in 2017 and the Hong Kong National Party’s Andy Chan in 2018.

International activists and opposition figures to have graced the premises include South Korea’s Kim Dae-jung in 1994 (who would become president four years later), Sam Rainsy of Cambodia in 1996, writer Fatima Bhutto of Pakistan in 2007 and Malaysia’s Lim Guan Eng in 2012, who is now finance minister after the shock election this year. Anwar Ibrahim, Mahathir’s protégé who became his archrival, and is now prime minister in waiting, signed the book in 1994.

For an international finance centre, there are surprisingly few business names in the guest book: Richard Branson dropped by in 1994, Body Shop’s Anita Roddick in 2000 and Steve Forbes in 2002.

The FCC has long been a supporter of literature and the arts, and the roll of literary talent entering the club has included Han Suyin, Khushwant Singh, Amit Chaudhuri, Elena Poniatowska, Pankaj Mishra and Jung Chang. Photographer Lord Lichfield visited in 1989 and jazz great George Melly left his name in 1997.

Some left more than their names. Barrister Henry Litton attached a surprisingly artistic self-portrait. Pro-democracy veteran Martin Lee, on a return visit in May 1998, appended the note “I said I would come back.” Underneath, journalist Christopher Lingle added that Lee was “a hard act to follow”. Kevin Kallaugher, the cartoonist KAL in The Economist, added a caricature of President George W. Bush.

While the final signature in the book is that of US Consul-General Kurt Tong, the last word should perhaps go to former second vice-president the late Kevin Egan, who after signing off after an event in 2014, added: “What a splendid club – how does one join?”