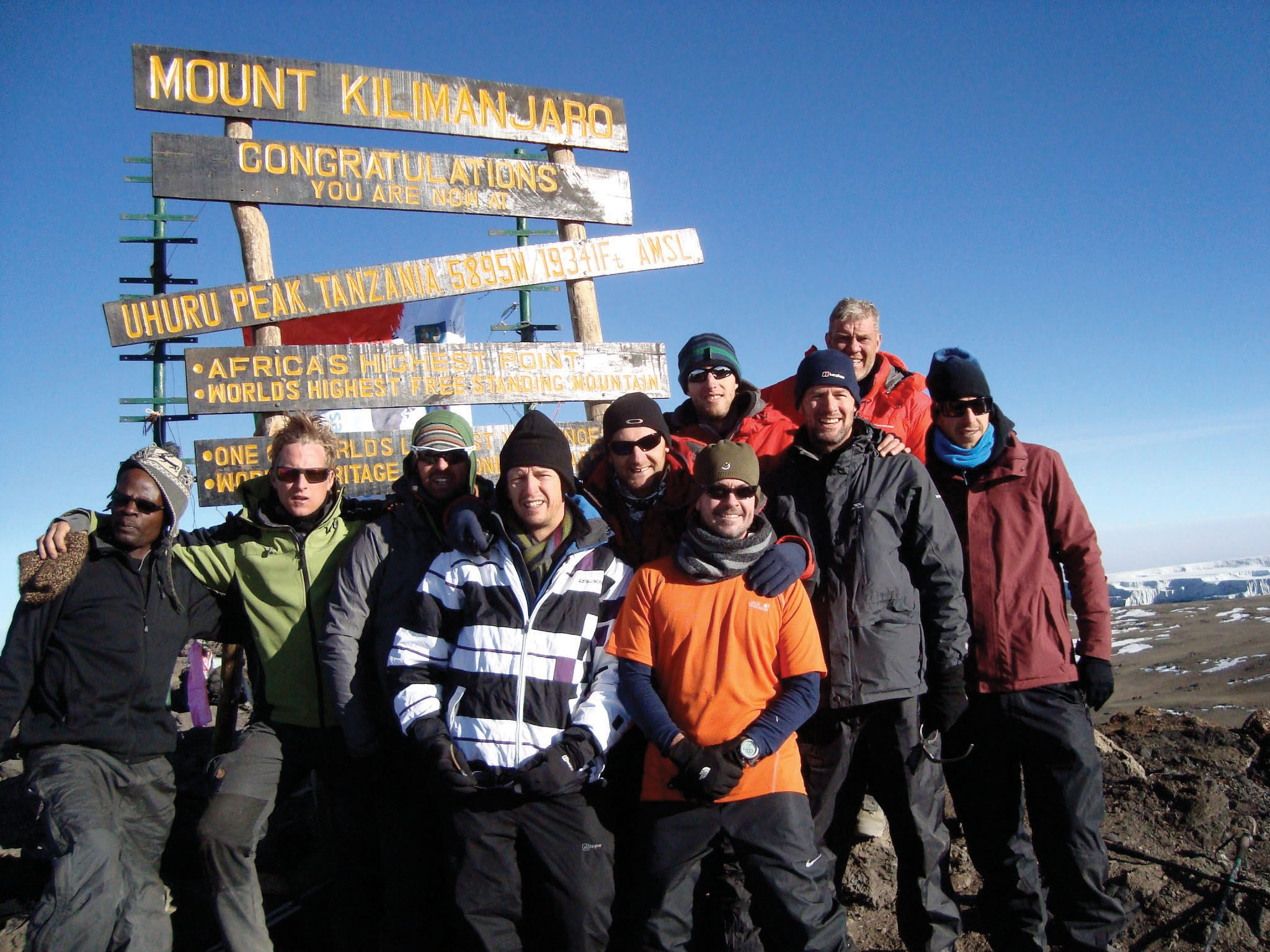 With the news that Pizza Hut just delivered a pie to the top of Mount Kilimanjaro, setting a new record for high-altitude PR stunts, Andrew Davison recalls his experiences in scaling Africa’s highest peak.

The 12-man team had some 50 guides, porters and cooks.

In 2014 an old friend came up with the idea of climbing Mount Kilimanjaro in Tanzania. We’ve still no idea what possessed him to come up with this idea, nor what compelled seven more of us to join him. And if motivation were ever a key component to successfully scaling Kilimanjaro, then our group were in trouble right from the start. None of us really knew why were doing this. We had no lifelong ambitions or bucket lists. Once the idea was on the table, there simply seemed no reason not to.

And so we found ourselves on an Ethiopian Airways flight from Addis Ababa to Arusha, in Tanzania, with a view of Kilimanjaro poking its head out above the clouds. Kilimanjaro at 5,895m high is the highest free-standing mountain in the world. In trekking terminology it falls into the “extreme” category of above 5,400m.

The day before departure we were given the four golden rules of climbing “Kili”: have the right equipment, poli, poli (walk slowly), drink lots of water (5 litres per day), and maintain a positive mental attitude.

The following morning we’re driven to the Londorossi Gate for registration, and then on to the edge of the Shira Plateau at a height of 2,800m, from where we will start. We’re introduced to the army of around 50 guides, porters and cooks that are required to get the 12 of us up the hill and down again.

The ice crystals on the outside of the tent in the morning are testament to just how cold it is, but it is clear with a bright blue sky

Walking across the Shira Plateau is easy if unspectacularly flat. We were already in poli poli mode. Surprisingly it’s difficult to actually find the rhythm to walk that slowly. The porters, who have lagged behind to finish the packing, shortly come racing past.

After three or four hours of gentle plodding, we arrive at the first campsite, at 3,550m, where the porters have already set up our tents. We’re each given a bowl of hot water for washing and introduced to the mess tent, where we’ll eat all our meals, drink endless cups of tea and coffee.

The food is surprisingly good given the location, a combination of carb-heavy potatoes or pasta, with a meat or veg sauce and a breakfast of porridge – ideal for slow-release of energy needed for hiking.

The ice crystals on the outside of the tent in the morning are testament to just how cold it is, but it is clear with a bright blue sky. The second day’s walking takes us further across the plateau, before taking a diversion to the summit of Shira Cathedral, a huge buttress of rock surrounded by steep spires and pinnacles. The mist surrounding the rock creates a ghostly effect with the tree moss – old man’s beard – hanging like damp Halloween cobwebs off the trees. This extra climb is part of the acclimatisation process and has induced some altitude sickness among our group.

Day three is a steady but reasonably easy climb up from the moorland of Shira Plateau and onto the broad upland desert beneath the Lent Hills. We’re at the campsite at Moir Hut at 4,200m in time for lunch, then have another acclimatisation walk in the afternoon. The peak affords a spectacular view over the plateau, with the clouds on either side curling up over the edges, and creeping across the plain towards each other like two armies moving into battle.

The following morning sees us ascend over numerous lava ridges across a dry, dusty moonscape, to the next camp at the volcanic plug that is Lava Tower (4,550m). Another acclimatisation walk takes us to Arrow Glacier, which seems to be in a rather sorry plight,. Our head guide, who has been climbing Kilimanjaro for 15 years, can recall a time when it was probably twice the length it is now. Research has indicated that the glaciers could have retreated entirely from Kilimanjaro by as early as 2020.

Some of the Kilimanjaro team struggled with the altitude.

Day five sees us descend from Lava Tower into the Great Barranco Valley and as the vegetation changes once again we find ourselves walking among large groundsel trees, their palm-like trunks topped with spiky leaf rosettes, and giant lobelia, a cactus-like flowering plant. In front of us now stands the Barranco Wall, a steep and exposed ascent of around 300m. The wall is near vertical, and while some of the porters will stroll up it barely using their hands, for most of us it represents the most physically challenging effort so far.

There is one more sharp descent to negotiate, and an equally sharp ascent, and then we’re at Karanga Valley campsite, at a height of 4,000m, which must make for our toughest day so far.

This is followed by a very short day; a short but steep climb out of Karanga Valley, onto a relatively easy path across a wide, shallow valley, gradually gaining altitude until we reach the Barafu Hut at 4,600m in time for lunch.

That night is to be our summit night – what this trek has been all about.

We’re in the mess tent for dinner at 4pm, prior to which we’re informed that one of the porters has succumbed to altitude sickness and needs to go down, despite having scaled the mountain countless times before. Unfortunately one of our own party has also decided he can go no further. He’s been struggling with fluid on the lungs for a few days but has now reached a point where the guides advise him not to continue. It’s a tough decision but undoubtedly the right one. Dinner this evening is a subdued affair.

We go to bed at 6pm. And wake at 11pm. And put all our clothes on, literally. And then we’re off.

As we leave camp there’s a steady procession of headlamps weaving their way up the mountain, like a line of fire-flies. And right from an early stage there are people being brought down, having succumbed to the altitude, the cold or simply exhaustion, including a member of our own team.

We walk in silence. At the very time you need some banter to sustain you, the well is dry as people struggle with the thin air, the cold and the relentless plodding. I’m fine for a few hours and even began to think that this Kilimanjaro lark is quite easy. However, at around 4am, as the tiredness and the altitude kick in, it suddenly goes from being a challenging but enjoyable experience to a brutal one. The last two hours or so to Stella Point are absolutely draining.

Stella Point comes into sight but I can’t summon the strength to make a final triumphant burst to the top and it remains the same slow plod for every last step.

Day five sees us descend from Lava Tower into the Great Barranco Valley and as the vegetation changes once again we find ourselves walking among large groundsel trees, their palm-like trunks topped with spiky leaf rosettes, and giant lobelia, a cactus-like flowering plant. In front of us now stands the Barranco Wall, a steep and exposed ascent of around 300m

It takes just a few moments to get our breath back, slow our heart rates down, and have a cup of tea. Then we are off again. To have reached Stella Point at 5,735m is to have climbed Kilimanjaro; the point at which you get a certificate. But there is another point, the highest point, Uhuru, at 5,895m, another 160m, and 45 minutes, up.

The team perfects the poli poli (walk slowly) rule on the way up.

Another of our team has been struggling all night, needing regular breaks, occasional vomits, and guide’s assistance. He’s ready to call it quits and go back down. But the guides think he can make it and push him on.

Finally, Uhuru Peak. Below us lies the 2.5km wide caldera, looking exactly as a volcanic crater should; the perfectly round inner Reusch crater like a valve just waiting to be released.

Our descent takes a couple of hours, slipping, sliding, half running, half walking, down to Barafu Camp, where we’re allowed to sleep for a while until the last of our group completes their descent. Then we endure a further 2-3 hour descent to Millennium Bivouac, our final camp and final night on the mountain. The last day is then a long descent all the way back to Mweka at 1,650m, by which time most people can think only of a hot shower and a thirst-quenching beer.

And that was Kilimanjaro. Several days of gentle walking followed by one night of hell… and no pizza.