News The Correspondent The yellow umbrellas are ba... 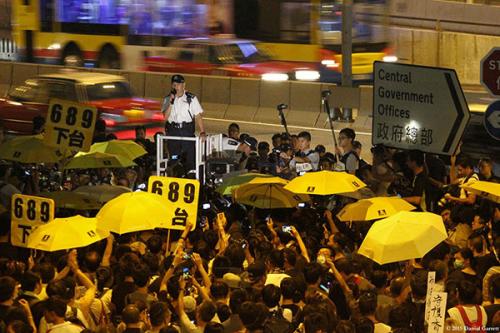 The yellow umbrellas are back, despite pressure from Chinese officials

The now ubiquitous yellow umbrellas surged around the Hong Kong government offices to mark the first anniversary of the pro-democracy Occupy movement which shut down  central Hong Kong for 79 days last year.

While Occupy failed to achieve its goals, the silent rally on September 28 showed that political activism was was alive and well in the city.

In the build-up to the rally, China typically unleashed a rash of tired political rhetoric warning Hong Kong of dark days ahead. Readers of last year’s September/October and November/December issues of The Correspondent will remember Beijing’s almost daily threats about the protests.

First, we were surprised to hear that Hong Kong’s economy “lags” behind regional rivals Singapore and Macau because Hong Kongers have failed to “de-colonise” after the 1997 British handover. This was from Chen Zuo’er, former deputy director of the State Council’s Hong Kong and Macau Affairs Office.

This startling assertion has, unusually, been met with a string of rebuttals from Hong Kong officials and Beijing-friendly politicians.

Chen’s remarks – which appear to reflect concerns that the central government’s authority was being challenged in Hong Kong – have also ignited debate on whether they might presage new hardline policies towards the city.

A few days before this China’s top man in Hong Kong, Liaison Office director Zhang Xiaoming caused alarm when he said that separation of powers does not exist in Hong Kong, and that the Chief Executive enjoys “a special legal status that transcends the executive, legislature and judiciary”.

Not to be left out of the fun, an anti-Occupy group attacked the leaders and participants of the Occupy movement, saying the activists had failed to “show repentance” over their conduct.

“I have not seen leaders and participants of the Occupy movement sincerely repent what they had done,” said Stanley Ng Chau-pei, spokesman of the pro-Beijing Alliance for Peace and Democracy. People should not forget the negative consequences of the protests, Ng said.

While he admitted that he has no idea at the moment on how Beijing can improve relations with Hong Kong, Ng – who is also chairman of the Hong Kong Federation of Trade Unions and a deputy to China’s National People’s Congress – said people should not put the cart before the horse by blaming Beijing for what happened last year.

Lee said he has yet to see any evidence of Xi pushing for human rights reforms in China. He said that local students still support “one country, two systems” and are not advocating for Hong Kong to be independent. He also said that the central government should keep their promise and implement universal suffrage in Hong Kong.

Joshua Wong said that a list of the names of 200 Scholarism members were made public after their computers were hacked, causing 90% of them to be refused entry to the mainland and Macau, which could affect their future. In May, Wong was denied entry to Malaysia by immigration authorities.