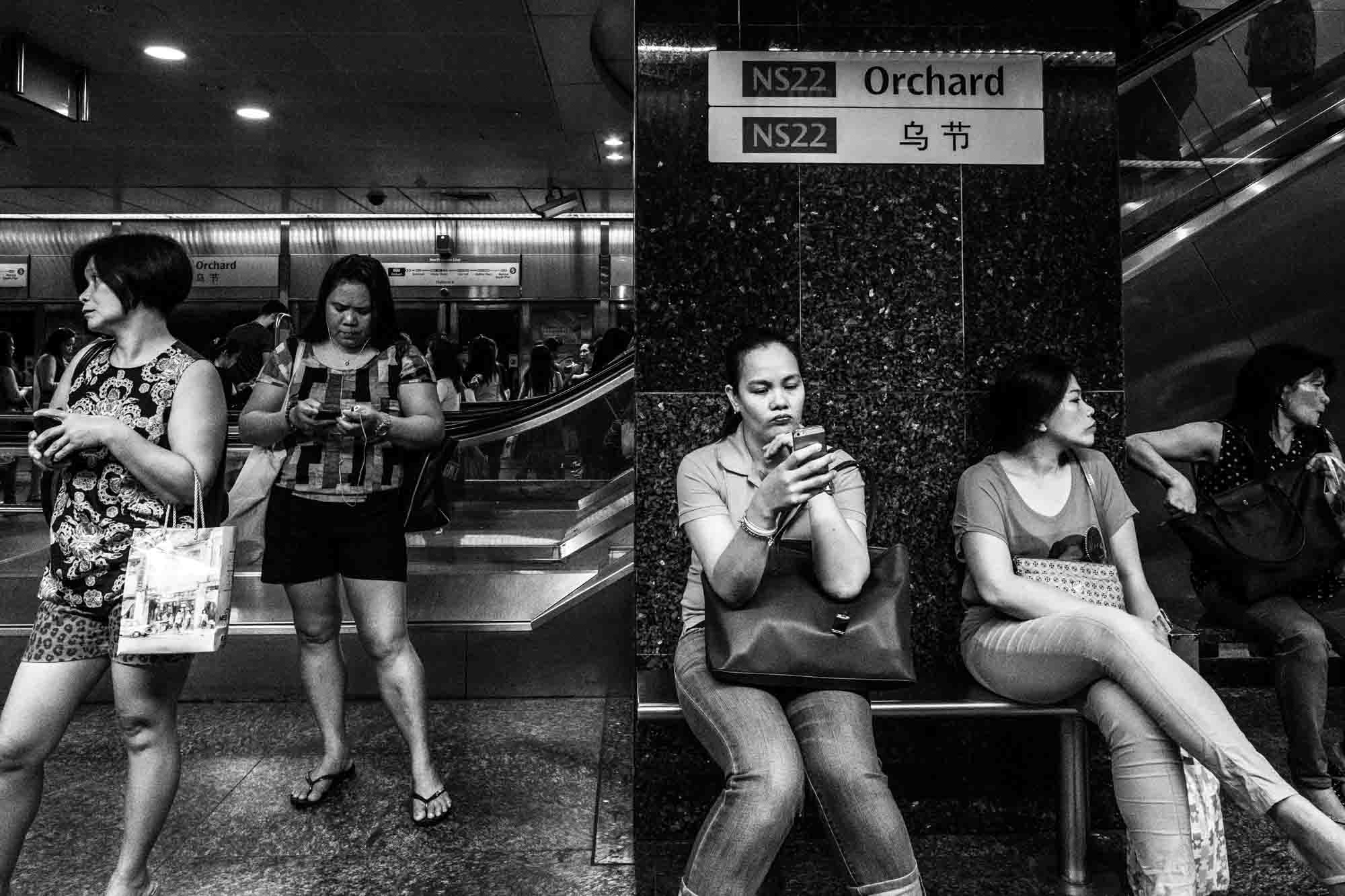 The images in the exhibition are part of a global project undertaken by Xyza Bacani to explore the intersection between migration and human rights. The project is supported by the Pulitzer Center. Bacani is a Filipino street photographer and a Magnum Foundation Human Rights Fellow, known for her stunning B&W images of Hong Kong street life.

Female migrant workers waits for the train in Orchard, Singapore. Orchard is full of migrants every Sunday. Photo: Xyza Bacani

Singapore is a prosperous country in Asia and migrant workers have played an important role in its success, but at what cost? Hidden behind a shelter in Singapore are hundreds of distressed migrant workers of different nationalities waiting for their cases to be heard and hoping to move on. These people are victims of human labour trafficking, emotional, psychological and physical abuses.

Women are most vulnerable to these types of abuses, but even male migrant workers are subject to exploitation. Migrant workers from China, Bangladesh, India and other Asian countries go to Singapore to work as construction workers with little protection from local labour laws.

When the article was published, a spokeswoman for the Ministry of Manpower of Singapore said that ‘Singapore authorities take strong action against employers who do not comply with the law in their management of migrant workers’. She noted that nine in 10 foreign workers reported that they were satisfied with working in Singapore, according to a survey published in 2014, but for hundreds of these migrants, it’s far from reality.”

A portrait of Huang Mei Xin, 32-year-old from China. According to him, he filed a work injury case when he broke his arm while at work. He said the alleged company misreported his case and he was not paid for his medical certificate wages. He is still waiting for his final medical assessment and still wants to continue working in Singapore. Photo: Xyza Bacani

Male migrant workers spending their day off in Little India. Most construction workers are usually from South East Asia and are paid less than locals on their work in Singapore. Photo: Xyza Bacani

Nre Nie Win and Phoo Phoo, age 26 and 25, from Myanmar, watch a movie on a mobile phone. According to them they were not given any holiday, wages were unpaid and they’re not allowed to use mobile phones. Photo: Xyza Bacani
We measure site performance with cookies to improve performance.