News The Correspondent What happens when governmen... 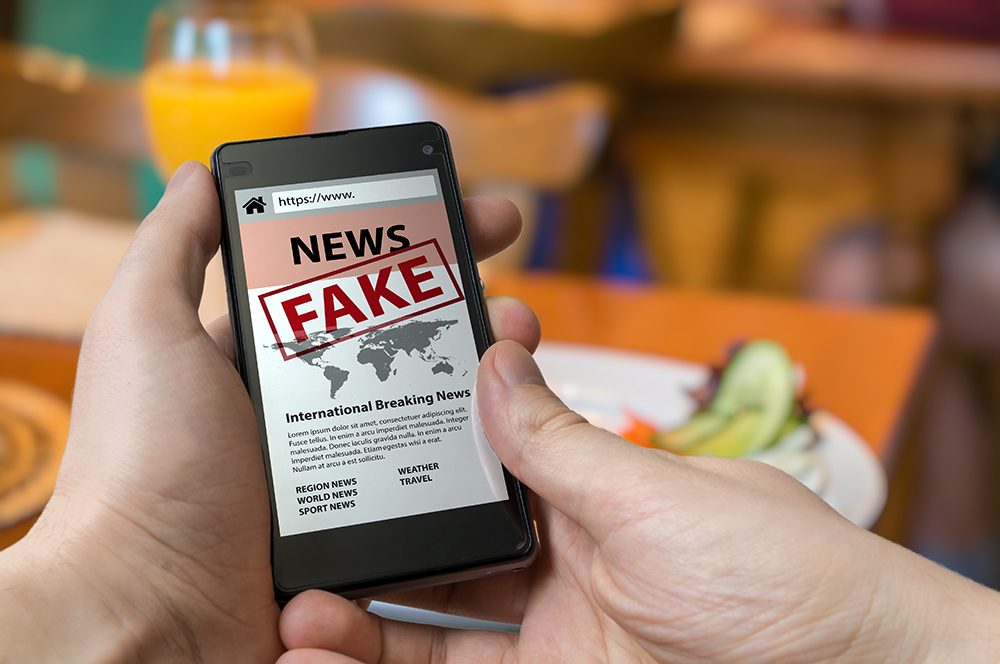 What happens when government ministers decide what is true and what is false?

The Protection from Online Falsehoods and Manipulation Act was passed in Singapore in May. Once signed into law, it will give government ministers sweeping powers to decide which statements are true and which false. Kirsten Han, an outspoken opponent of the act, explains her concerns.

In November 2016, a photo began to circulate on social media. Taken in a public housing estate in the north of Singapore’s island, it drew attention to one of the public housing blocks, claiming that the roof had collapsed.

But the roof hadn’t collapsed; it was merely an optical illusion caused by the building’s terraced design. When All Singapore Stuff, the Facebook page that had distributed the image, realised this, they swiftly removed the post, although not before it prompted a small flurry of worry and concern. Some people, it was reported, called the police.

As “fake news” goes, this was pretty small potatoes compared to the disinformation crisis spreading across other countries, such as Myanmar, India and Sri Lanka. But that didn’t stop the People’s Action Party (PAP) government in Singapore from pouncing on it as an example of why the city-state needs to take action to deal with the scourge of misinformation. 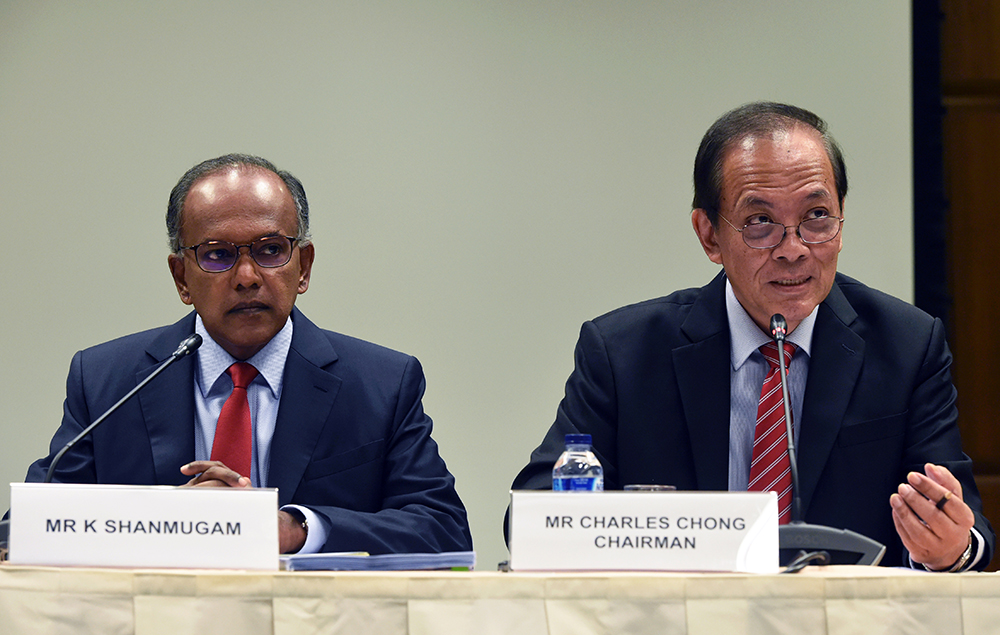 Singapore’s Minister of Law K Shanmugam (2nd L) and Charles Chong, deputy speaker of the parliament and chairman of the Select Committee on Deliberate Online Falsehoods, attend a press conference in Singapore on September 20, 2018

The Protection from Online Falsehoods and Manipulation Act, more commonly referred to as POFMA, is the PAP government’s newest weapon to, ostensibly, fight “fake news”. It’s the fruit of two years’ worth of chatter about introducing new legislation to combat “deliberate online falsehoods” — a move that K Shanmugam, Minister for both Law and Home Affairs, had said was a “no brainer” back in 2017.

The idea that something needs to be done about disinformation going rapidly viral on social media platforms like Facebook, Twitter and YouTube isn’t particularly controversial in itself. The problem comes in when trying to figure out the details: who gets to decide what is “fake”, and what should be done about it?

Under POFMA, any Singaporean government minister is given the power to issue correction notices, order takedowns, or direct internet service providers and intermediaries to block access to content. This exercise of executive power sidesteps the judiciary until the end — anyone inclined to challenge the minister’s order can only appeal to the High Court after the minister has rejected an application to review his or her own order. The law will apply to anyone in or out of the country, as long as the content is accessible by at least one end-user in Singapore. A clause at the end of the law also allows government ministers to exempt anyone they want from any provision of the act.

Essentially, POFMA has, in the first and second instance at least, made Singaporean ministers the arbiters of truth. 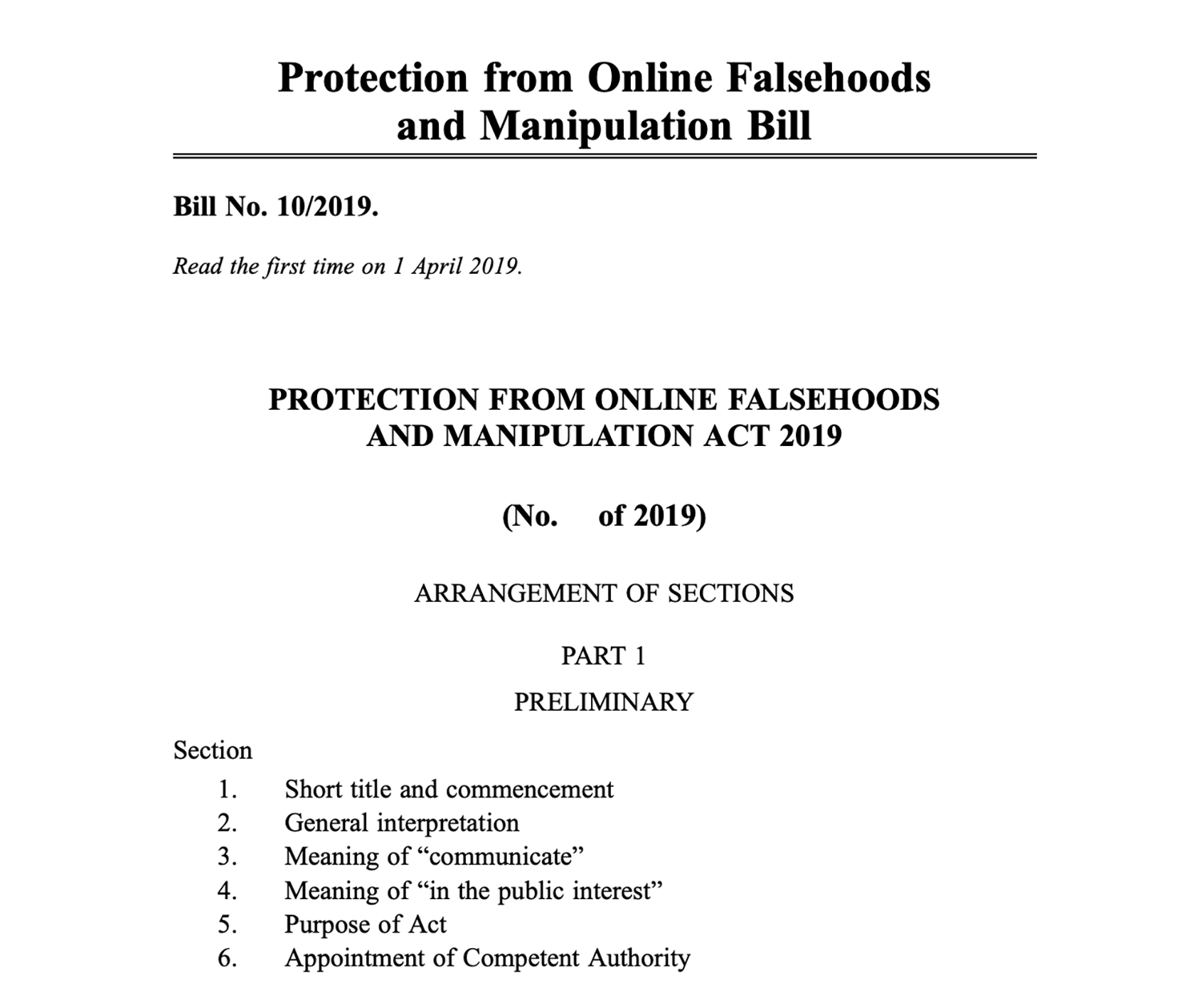 It’s problematic to give a government such sweeping powers over online speech, especially when it’s effectively a one-party state like Singapore. Predictably, civil society groups, journalists, academics and tech companies were concerned and unhappy about this state overreach.

The academics were among the first to marshal a strong, coordinated response: “Under these circumstances, POFMA is likely to make many academics hesitant to conduct or supervise research that might unknowingly fall foul of POFMA, or refer colleagues or students to faculty positions in Singapore’s respected universities,” they wrote in a letter to the Education Minister.

“This act discourages scholars from marshaling their expertise in precisely the areas where it is most needed — namely, pressing questions and challenges for which there are no clear answers or easy solutions.”

Journalists, including myself, followed with a statement: “By failing to distinguish between a malicious falsehood and a genuine mistake, the proposed legislation places an unnecessarily onerous burden on even journalists acting in good faith. Such a law will hinder rather than encourage the free flow of accurate information. News organisations might feel compelled to withhold important stories simply because certain facts cannot be fully ascertained. This is especially likely in Singapore where it is often not possible to get a response in time from the government.”

This resistance came in a context where it wasn’t even clear if Singapore was facing a disinformation crisis serious enough to warrant such a sweeping bill. Both the Green Paper and Select Committee on Deliberate Online Falsehoods had brought up examples of racist, hateful, violent speech found in other contexts, such as Myanmar, Indonesia and Germany, but were short on local examples.

Despite the resistance, the PAP government stood firm, as expected. “The Government is confident that most Singaporeans understand the bill’s main thrust. The concerted attempts by a small group of persons to mislead have not got any traction among most Singaporeans. The small group of persons I have referred to, speak in a shrinking echo chamber, with increasing shrillness,” wrote Senior Minister of State for Law and Health, Edwin Tong, in The Straits Times.

Parliament, dominated by the party, passed the law without amendments on 8 May 2019. But the Act has still yet to be signed into law — during the two-day debate, Shanmugam had promised that more details will be laid out in subsidiary legislation, which Singaporeans have not yet seen. It’s unclear when this “fake news” law will actually come into force.

Yet the law doesn’t actually need to come into force to become a worry — the passage of this bill in itself, in a country with a positive international reputation, legitimises such state regulation of online spheres of discourse. There’s also the issue of copycat legislation: would other authoritarian states look to Singapore’s POFMA and get ideas? And if the tech companies comply with Singapore’s demands under this law, would it legitimise similar demands from other jurisdictions, such as Turkey or China?

As Singaporeans wait and wonder who the first recipient of a POFMA directive will be, there are, unfortunately, no answers to these troubling questions.

Kirsten Han is a freelance journalist in Singapore focused on social justice, human rights, politics and democracy. She is also editor-in-chief of New Naratif, a member-funded Southeast Asian platform. Last year she was a guest speaker at the FCC and she won this year’s Commentary Writing (English) Human Rights Press Award.