News The Correspondent What Really Happened to Fli... 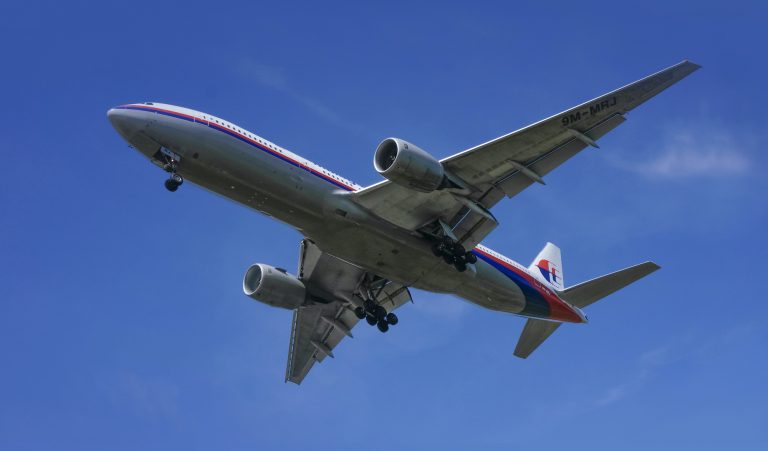 Flight MH370 took off from Kuala Lumpur for Beijing on 8 March 2014 with 239 people on board. Halfway across the Gulf of Thailand, the Boeing 777-200ER vanished from air traffic controllers’ screens without a trace.

The plane’s mysterious disappearance captivated the world. And when French daily Le Monde despatched its Hong Kong-based correspondent, Florence de Changy, to Kuala Lumpur to report on the tragedy, the veteran journalist had no idea it would lead to an ongoing, seven-year investigation and two books on the subject. The first, Le Vol MH370 n’a pas disparu [‘Flight MH370 Did Not Simply Disappear’], was published in 2016 by Les Arènes, and has since been translated into three languages with updates in each edition.

This February, HarperCollins published her second book: The Disappearing Act: The Impossible Case of MH370, which connects the dots from de Changy’s earlier investigations to reach a bold conclusion that discredits the official narrative as a sophisticated, costly and clumsy fabrication.

To recap: Within days of flight MH370’s disappearance, authorities claimed the plane had made a U-turn, flown back over Malaysia, and eventually crashed in the southern Indian Ocean. This was the official narrative when de Changy began reporting in Kuala Lumpur. But when she returned a year later to revisit the story, she discovered many details that simply did not add up. 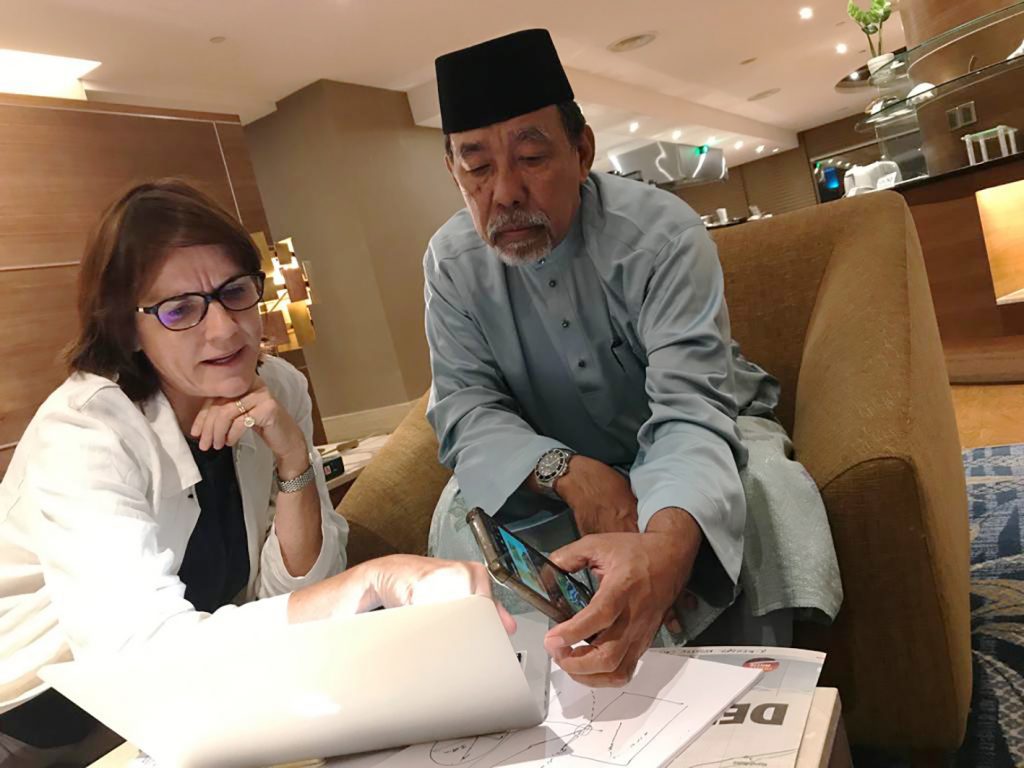 “One year on, and there was not a shred of tangible evidence that the plane had crashed in the Indian Ocean – not a single piece of debris,” says de Changy, who served as FCC President from 2017 to 2019.

Her follow-up story for Le Monde revealed gaping holes in the official narrative, which got people talking. In May 2015, the paper sent de Changy to the Maldives, where people claimed they had seen the doomed plane. Such tips turned out to be red herrings, but her articles caught the attention of French publisher Les Arènes, which led to a book deal.

“I started moving at a different speed, slower and more thoroughly,” says de Changy of writing Le Vol MH370 n’a pas disparu, which was published on the second anniversary of the plane’s disappearance. 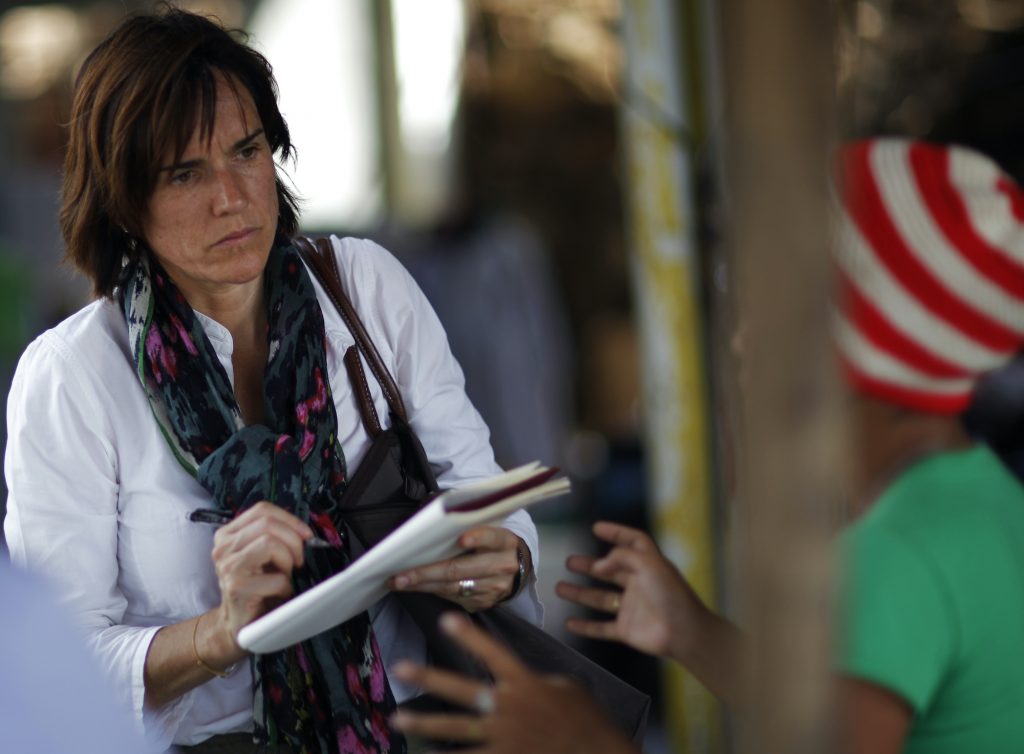 When official pronouncements didn’t add up, de Changy sought out insights from sources across Asia.

Step by step, interview after interview, de Changy discovered a wealth of intelligence and incongruencies. Among her interviews, the investigative reporter spoke with MH370 pilot Zaharie Ahmad Shah’s friends and family members. They protested what they considered a smear campaign to ultimately blame him for the incident by questioning his mental health and fitness to fly. De Changy also gained access to confidential records, which convinced her the pilot had been okay to fly.

Her investigation concluded that MH370 made no U-turn; no one turned off the transponder and ACARS (Aircraft Communications Addressing and Reporting Systems), as claimed by then Prime Minister Najib Razak; the plane never crashed in the southern Indian Ocean; and the subsequent Australian search operation was either a deliberate or passive act of diversion.

During her investigations, she assembled new evidence that begins to tell a different story and raises new questions. “I identified a problematic [electronic] cargo on the plane that had not been X-rayed, which is a no-no in terms of aviation safety, that was delivered under armed escort to the airport,” says de Changy. The 2.5-tonne cargo was listed as “Motorola walkie-talkies and chargers”. 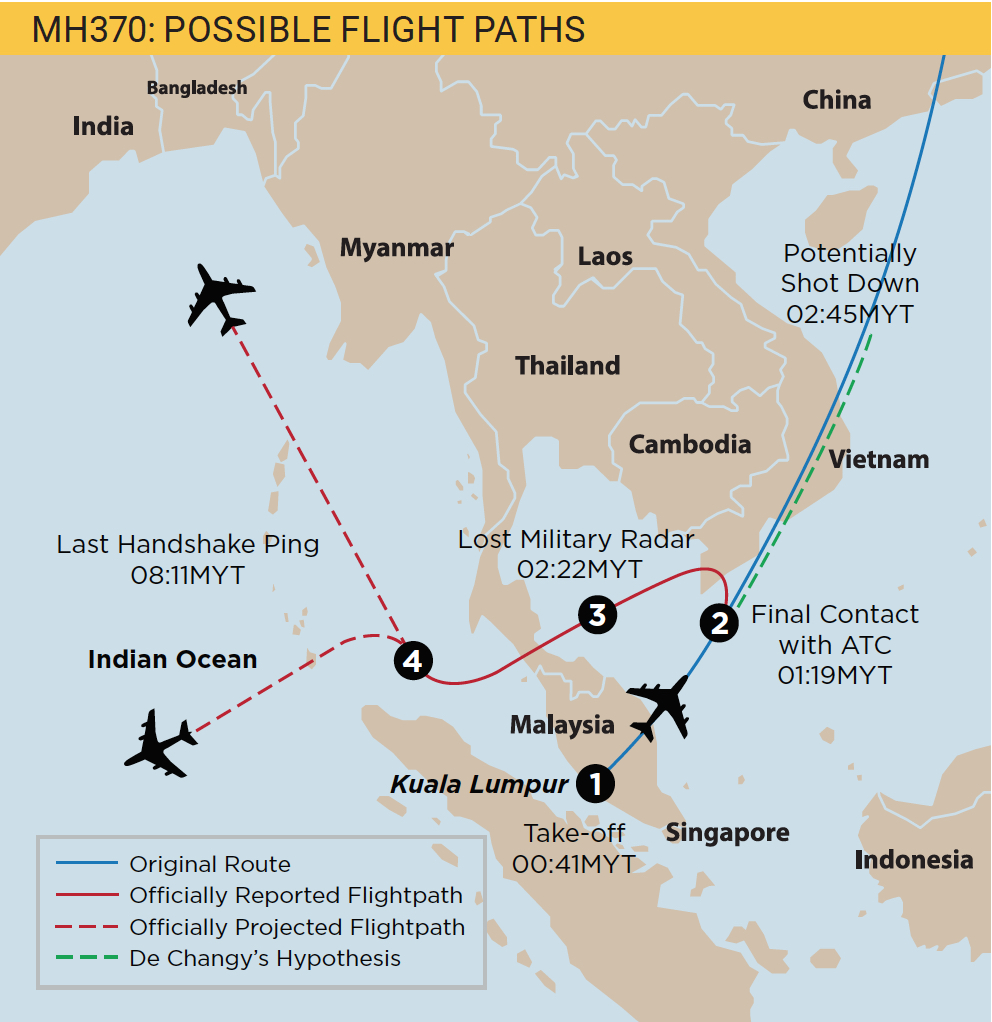 She also learned two US AWACS (Airborne Warning And Control Systems) – mobile, long-range radar surveillance and control centres for air defence – had been operating in the area. At first, de Changy didn’t know what to make of this information. But after the Chinese edition of her first book came out in 2017, a military contact informed de Changy about AWACS’ jamming capabilities, which led her to a hypothetical conclusion.

“Plan A was likely a cargo ‘confiscation’ [hijack] operation to cloak the plane with two AWACS, force it to land, seize the problematic consignment and let it fly off again. The plane would have landed in Beijing with a slight delay, a non-event by Chinese aviation standards at the time,” says de Changy, who points out that the intercept was planned at the point where Vietnamese air traffic controllers would have assumed responsibility from their Malaysian counterparts.

She believes this scenario – based on a mix of sources, clues and confidential documents – failed because the experienced pilot refused to go along with Plan A. “Disaster happened when the plane was about to reach Chinese airspace at around 2:45 am off the northern coast of Vietnam,” she says. De Changy hypothesises that the plane was shot down accidentally or intentionally – most likely by a fighter jet, missile or a new laser-guided weapon system that the US had been testing in the region.

In The Disappearing Act, de Changy continues to untangle this complex web of information. It’s well worth reading to find out about the confidential documents and off-the-record conversations that led to her conclude the official narrative is a fabrication. 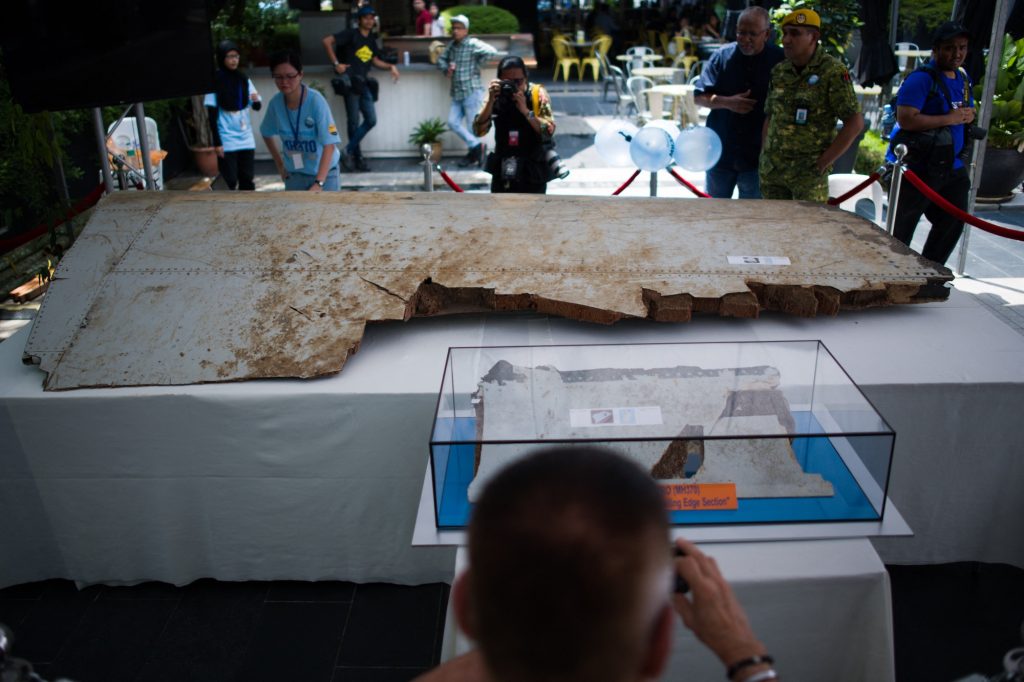 A recovered Boeing 777 wing flap identified to be part of the missing Malaysia Airlines flight MH370 on display during a memorial event in Kuala Lumpur on 3 March 2019.(Photo: Mohd Rasfan / AFP)

She admits there are still some gaps in the story but hopes that this book could motivate more people to come forward. De Changy has been trying to track down the two Cathay Pacific pilots who flew over the Vietnam coast the day after the incident and reported spotting a massive field of metallic debris to air traffic control. Although this report is in the official log, she hasn’t been able to identify the pilots. Perhaps this might be the time for them to speak up, says de Changy.

“With each [new book] deadline, you revisit documents, relaunch new leads, call people again – with every deadline, the story improves, and you push it further,” says de Changy.

Any book that dares to debunk the official narrative is bound to invite grilling, and de Changy has braced for criticism. However, she has already received many endorsements to date. Veteran investigative journalist Edward Jay Epstein says the book is a must-read for anyone wishing to understand one of the greatest mysteries of the 21st century. 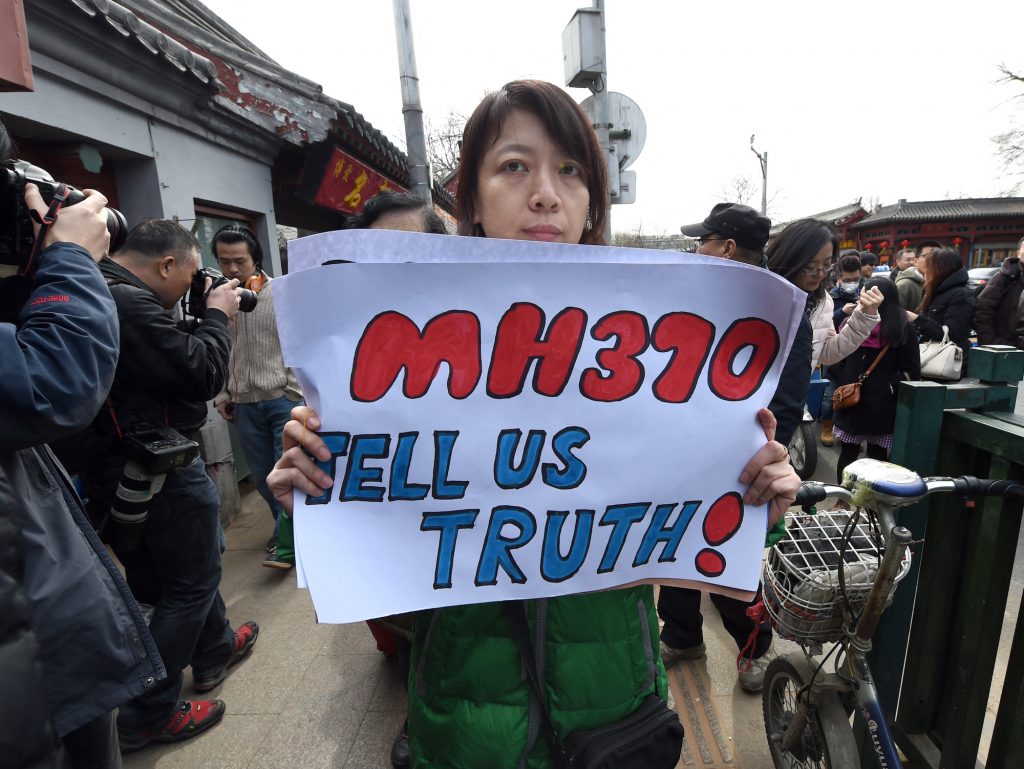 De Changy concludes: “As a senior journalist who has worked in this part of the world for some time, I could not let this nonsensical story go unexplained. I feel a duty to get to the bottom of it.”

Visit the FCC to purchase ‘The Disappearing Act: The Impossible Case of MH370’. Better yet, leave your book at the front desk and de Changy will swing by to sign it for you. 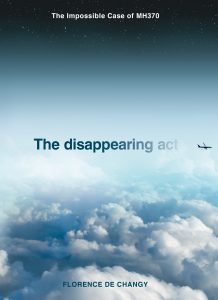 “It’s a five-figure deal [in euros], but don’t forget that in most of these deals, you share about half with the publisher, and your agent usually takes a cut as well,” says de Changy.

Looking ahead, de Changy may also have another TV project in the works in the US.

In 2019, when Harper-Collins announced the publication of her new book, Netflix expressed great interest. But the project remains under wraps for now. 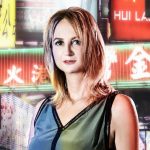 Kate Whitehead is the author of two books about the Hong Kong underworld and has worked for the South China Morning Post and Discovery magazine. She contributes to local and international media outlets while also working as a psychotherapist.