News The Correspondent Why fake news is good news ... 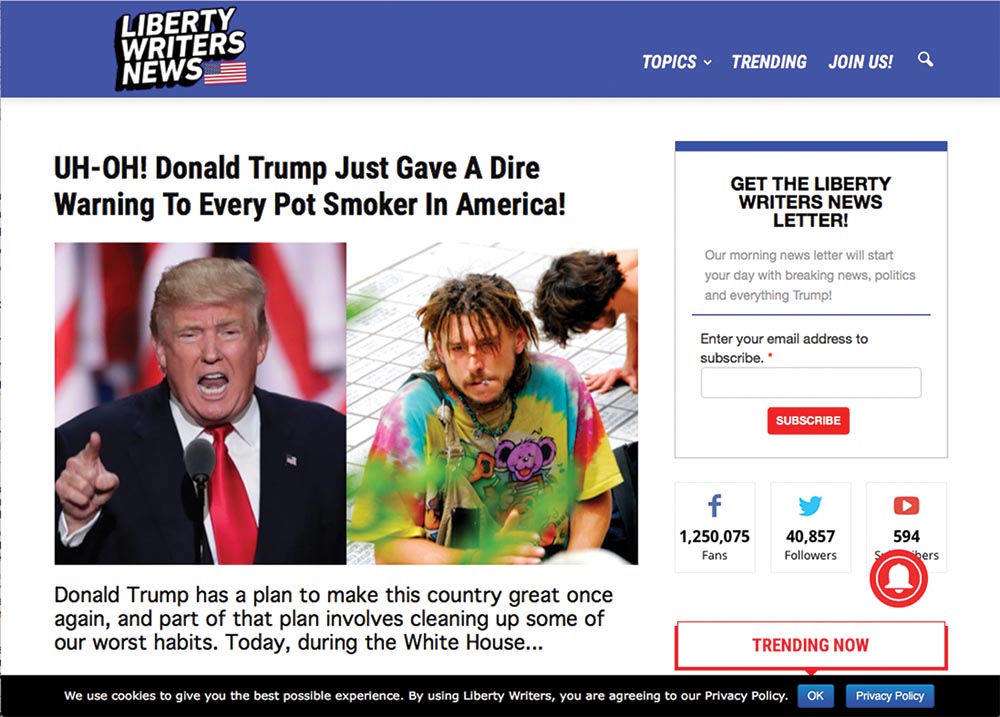 Why fake news is good news for some journalists

There is one sure way for an individual journalist to make money online: lie through your teeth to an audience that is not interested in facts and welcomes these “alternative” facts as the new gospel: fake news is good news, if it suits you.

Two young former restaurant workers Paris Wade and Ben Goldman and their website LibertyWritersNews did just that by tapping into the Donald Trump momentum last year. The game plan was think of a headline, say, “Can’t trust Obama”; then make up a story very loosely on the facts; than conclude with “Down with globalists… if you love this country”; then wait for a few seconds for a response (from the base – white, working class woman, Midwestern) like, “you are the only one I trust to tell the truth”. See, easy.

The more successful bloggers usually feed into their own websites, have an active Facebook strategy and have been picked up by other websites for a fee.

At a time of continuing discussion over the role that hyperpartisan websites, fake news and social media play in the 2016 election, LibertyWritersNews illustrates how websites can use Facebook to tap into a surging ideology, quickly go from nothing to influencing millions of people and make big profits in the process. At its height, the website gained 300,000 Facebook followers in October alone.

This single-issue approach often works best with special interest groups and helps drive advertising and sponsorship. The more successful bloggers usually feed into their own websites, have an active Facebook strategy and have been picked up by other websites for a fee.

News websites carefully maintain and feed their Facebook pages to bring in new readers as well as maintain their base. The US-based news website Quartz began operations on Facebook producing content for mobile phones and tablets as it found that growth in readership of news was on those devices. It was only later that Quartz designed a desktop version.

“Clearly we think a lot about Quartz’s presentation on Facebook based on the conviction that patterns of people finding content on their mobile devices via social networks actually reaches a wider demographic than you would have thought,” said Quartz’s founder and editor-in-chief Kevin Delaney.

Just as many individuals and companies can make a good living on Facebook selling products and services direct using all the nifty Facebook tools to gain followers and sales, so too can individual journalists. It all starts with having good content with interesting links, images, and updates every day. Then you add as many affiliate programmes as you can get, start writing e-books. By creating fan pages (and websites to go with them) you can then start selling posts on these pages. You can also join the Facebook posts market or Facebook fanpage market.

Another tool for journalists which has become popular in the last year is Snapchat which has become an important player in the social media landscape. While it has mostly been used by celebrities and individuals, many journalists and news organisations use Snapchat as a fresh way to deliver the news and connect with audiences.

Some of the news organisations that use Snapchat include the South China Morning Post; Al Jazeera English (using its network of 80 bureaus to cover underreported stories); BBC News (journalists report like they would in a television news segment);  The New Yorker (shows how they make their editorial decisions and interactions with readers); National Geographic (posts informal snaps of content); ABC News (Australia); CBS News; AFP; NBC; The New York Times; The Washington Post; Le Monde.

Former winner of the FCC’s Photographer of the Year Awards John Stanmeyer, a National Geographic photographer, understood the app’s power very quickly and used it both for the company and his own account.

For freelance journalists, it’s another useful tool to get the word and image out – and many around the world have taken advantage of it. Former winner of the FCC’s Photographer of the Year Awards John Stanmeyer, a National Geographic photographer, understood the app’s power very quickly and used it both for the company and his own account. He is also an avid user of Twitter and is considered a pioneer for using Instagram.

“Snapchat brings the reader into the story. Each viewer becomes a part of the assignment. They are my travel companions,” Stanmeyer was reported as saying. “When millions of readers pick up the magazine each month, they only see 12 to 15 photographs. But so much more takes place.”

As mobile devices increasingly dominate the scene, so too does the so called mobile journalist or mojo… believe it or not. These days there is a wealth of resources for budding mojos online. Both Twitter and Facebook have practical tips about the language that suits you better and for the type of phone you work with. Mojos are particularly active on Twitter.

While news outlets are increasingly open about the need to better engage their readers, definitions of what “audience engagement” actually is can be inconsistent at best and elusive at worst. Engaging and interacting with readers isn’t just essential for staying relevant – it can make or break a freelancer or newsroom’s financial survival as well.

It is straightforward enough to measure the metrics of a website or story through Google Analytics. For tracking how well your organisation is performing on social media sites, both Facebook and Twitter have built-in analytics. While traffic analytics can give an effective snapshot of an audience’s browsing habits, they don’t show the full picture of how readers interact with content. This can be done with a reverse Twitter or Facebook search which has proved an effective way to find people engaging with your news content. Another way is to place your link into Twitter and see who is talking about it – then to engage with that audience. There is also the Center for Investigative Reporting’s Impact Tracker, an open source platform for monitoring and visualizing stories’ long-term impact over time.

Producing online videos either as part of websites or on YouTube has become profitable and a competitive business. In mobile device-savvy Hong Kong where some 96% of smartphone users browse the Internet daily, the average user watches more than 147 online videos per month which averages to 12 hours of online streaming every month.

Tommy Leung produced a video – Everyday Narcissism Worsens – which became viral three years ago, where he uses a “freestyle” tirade about vain Chinese men who post “selfies” on social networks. It has since it had over 1.5 million hits and 15,000 likes. Using this self-made celebrity, Leung has turned it into a business making freestyle monologues about everyday bugbears as well setting up his own new media company which provides product placement services to brands and creates viral videos for clients,

Bren Lui is an established YouTube beauty expert who started video blogging when the programme first started in 2011. For Norma Chu, it all started with a food blog and her DayDayCook website which developed into YouTube channel of culinary videos and recipes. The site now gets 1.5 million page views per month and 120,000 unique users that Chu pushes to her website via her YouTube channel. To maintain the channel she produces some eight to 15 short videos a week.

Money making online: Journalists can make money online, but it does take a combination of opportunity, luck and plain hard work.

Funding from an angel investor (eBay founder Pierre Omidyar’s First Look Media) or funding from a corporation that is willing to make a long-shot, but potentially high yield investment (some of Bloomberg’s ventures)

Ads from real (not network) advertisers; add network ads; AdSense ads from Google; outbrain-style links to other people’s content that pay when readers click it; native advertising (paid content that matches the website’s editorial standards while meeting the audience’s expectations), and make the native ads yourself (and thereby get a production fee). Also build a microsite for the native content and get paid separately for that.

Subscription (no content unless you pay); paywall (some content, then you have to pay, like the New York Times); micropayment (pay for each individual piece of content); membership (content is free, but bonus stuff for members); tablet-only subscriptions; paid app; tip jar (asking for support without perks); Kindle subscriptions.

Promote yourself through: public events (ticket and corporate sponsor revenue); conferences for professionals (ticket revenue, badge sponsorship, mobile service sponsorship, booths/expo revenue); bring people in for content of event, then sell them something; native events put on for advertiser; paid parties: readers pay to socialise with you; teach classes for readers or other journalists; Webinars.

Publish an e-book of your digital content; Kindle singles and other e-books; sell unusual books for non-Amazon publishers; sell photo archives both digitally and as prints; sell access to archives.

Other sources. Use your Google page rank power to put in links to other places and get paid for referrals; sponsored tweets; get paid to make Facebook posts on a particular subject; ads in emails; build apps for people; produce higher-end specialised products; targeted research for subscribers who pay a premium (BI Intelligence); join an affiliate programme; get people to sign  up for an email list for an advertiser, as Upworthy does; sell your subscriber data; sell your email lists.

Build a platform, put great journalism and/or photos on it, and sell the platform (Atavist storytelling site now backed by angel investors).