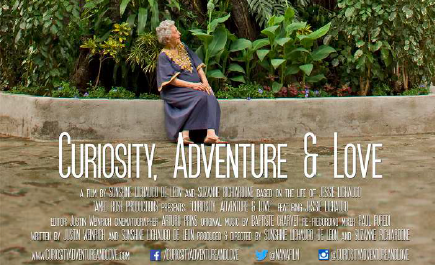 A documentary recounting the story of a young American woman’s life in the Philippines from the 1930s to today is set to be screened at its 6th film festival – but FCC members and guests will get a sneak preview of the film this week.

Curiosity, Adventure & Love is narrated by 105-year-old Jessie Lichauco, a Cuban-American migrated to the Philippines where she met her husband Marcial Lichauco, a Filipino diplomat and lawyer. She shares her experiences of the country as it went through war, occupation and reconstruction. It was announced on Monday that the film would be screened at LA Femme Film Festival in Los Angeles next month.

The film’s producer, Sunshine de Leon, is Jessie’s granddaughter. A freelance journalist, Sunshine said from a young age she knew her grandmothers story was fascinating and had initially wanted to write a book. Over the years Sunshine began to collect anecdotes from Jessie. But a chance suggestion changed the course of the book.

“So, when one day, a film-maker friend suggested that since she could still tell stories at her age and she remembered history with details that made it come alive, she would make the perfect character for a documentary movie I said, with complete naivety, “You are absolutely right. I am going to make a film”,” she said

Simple? Not quite – it would be eight years before the film was made.

“I think the film took a long time to produce because 1) I was doing it while working as a freelance journalist and 2) it was my first film and I had no training whatsoever in filmmaking and for the first few years was working completely on my own. I eventually met my co-producer and co-director Suzanne Richiardone – and from that point it took another four years.”

she continued: “I knew I had a good story but how to weave together the elements of that story in the most powerful way was a challenge. We were trying to blend history and biography with lessons in life and humanity.“

By recounting her life in the Philippines, Jessie sheds light on the country’s turbulent history, including the Japanese invasion and occupation during World War II; and life under the corrupt Ferdinand and Imelda Marcos.

“It’s important to understand the past in order to  comprehend the present and move forward in the best way possible. I hope that they walk away with a greater understanding of what has made the country into what it is today and I hope they learn from the wisdom she shares about how to live our best lives. and are inspired to do more to help the country (and the world!)”

Curiosity, Adventure and Love is showing at the FCC on Wednesday, September 20 from 7pm, where Sunshine will give a short talk to introduce the film. $100 (MEMBERS)  $150 (GUESTS). Fee will include one drink. Please reserve with the FCC concierge at (+852) 2521 1511 or (email) [email protected]