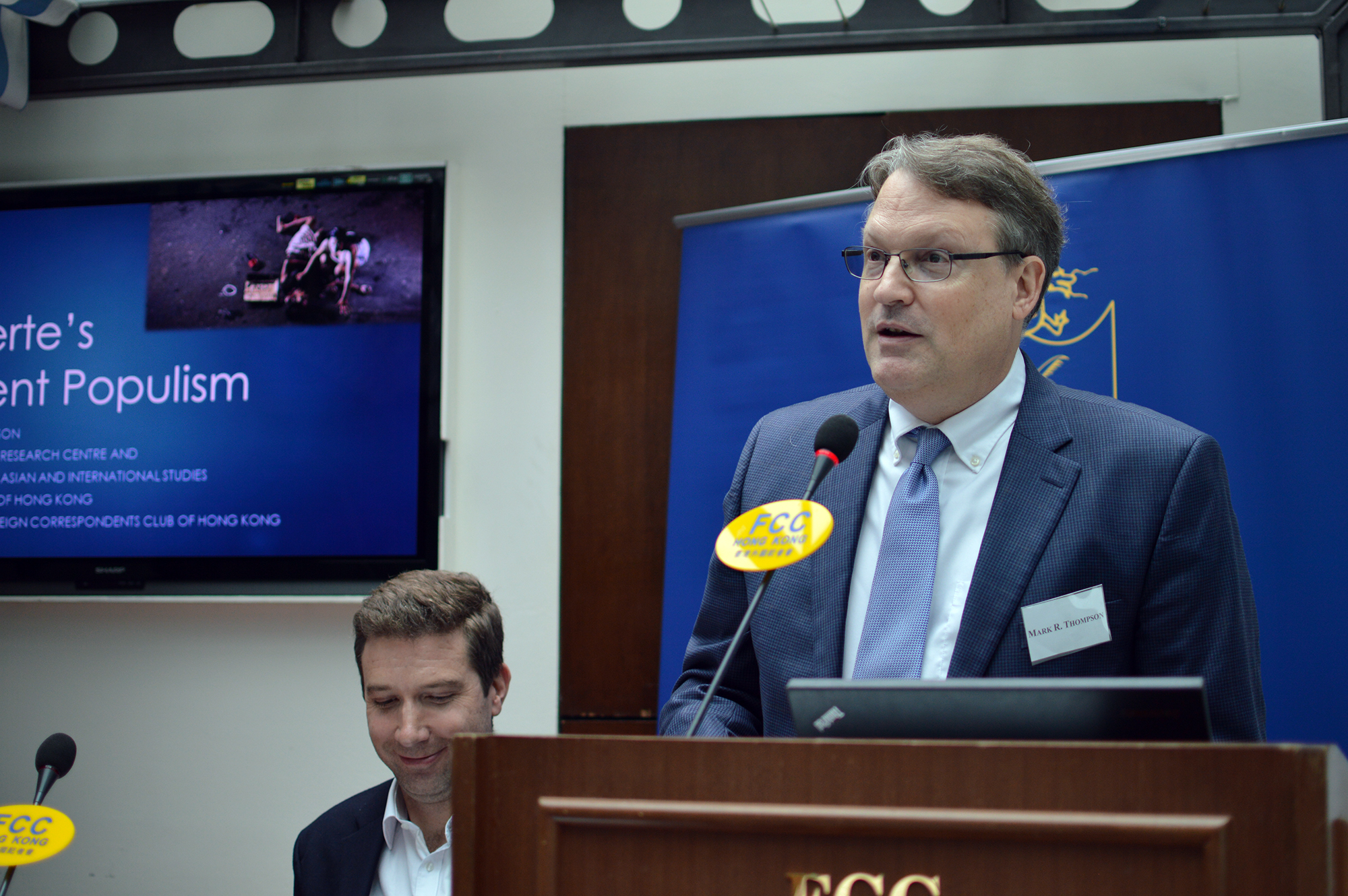 Filipinos support controversial President Rodrigo Duterte despite many fearing that his bloody war on drugs could target them, said an expert on politics in the Philippines.

The tough talking president and former lawyer has drawn criticism from human rights advocates for his open encouragement of the extrajudicial killings of drug users in the country. Prof Thompson said it the number of deaths so far is unclear but that it is certain to be more than the 3,000 killings that took place during the last year of Ferdinand Marcos’ presidency. Human Rights Watch puts the number at more than 12,000. Duterte offers cash rewards to police who carry out the executions which human rights groups like Amnesty International have pointed to as an economy of murder.

Mark R. Thompson, professor and head of the Department of Asian and International Studies (AIS), told the November 7 club lunch that Duterte’s approval rating was currently at around 80% – much higher than his American counterpart Donald Trump’s 35%. Unsurprisingly, this was not the only comparison between the two men. “Duterte out-Trumps Trump in terms of his language,” he said. “He’s willing to say things as they are and this gives Filipinos a sense of authenticity.”

For many Filipinos, this state violence has created a sense of political order amidst weak institutions, he added.

When he took office in 2016, Duterte openly broke with liberal reformers to declare his violent crackdown on drugs. Estimates at the time put the number of drug users in the country at 1.8 million of the 100 million population. Duterte later revised this figure to 3 million.

Prof Thompson, author of The Anti-Marcos Struggle, said most of the drugs are likely to come from China, and that in a recent case the Chinese authorities tipped off the Philippines to a smuggling ring that it was claimed was linked to Duterte’s son, Paolo.

Relations between China and the Philippines have in the past been strained amid court actions over the sovereignty of islands in the South China Sea. However, Duterte was quick to publicly realign himself with China as he cooled his relationship with the United States.

Despite moves to intimidate his opponents at home and abroad – the Commission on Human Rights has become a target, with Duterte threatening to abolish the Philippines’ National Human Rights Institution (NHRI) – Prof Thompson believes that the country is not yet an authoritarian state. “The press is largely uncensored,” said Prof Thompson, co-author of The Vote in the Philippines: Electing a Strongman. “Courts are not yet officially gagged but they are intimidated.”