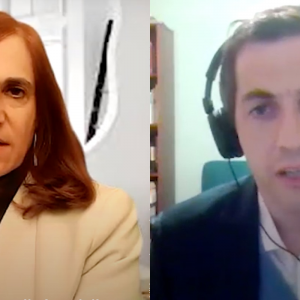 Experts: Competition and Cooperation Will Define Biden’s Approach to China

President Trump’s ratcheting-up of tensions with China will have lasting effects and won’t be easy to reverse by the incoming Biden administration, according to two Washington-based experts who discussed Sino-U.S. relations in a Zoom event hosted by the Foreign Correspondents’ Club of Hong Kong.

“The assessment by the Trump administration of the multitude of challenges that China presents has become widely accepted,” said Bonnie Glaser, director of the China Power Project at the Center for Strategic and International Studies. Referring to the notion China’s rise is bad for the U.S., she added, “It’s still not a consensus, but it’s certainly a majority.”

Fellow panelist Tom Orlik, Bloomberg’s chief economist, shared the sentiment. “There’s been a change in tone and approach to international relations under President Trump,” he said. “The diplomatic guardrails have come off.” Orlik, author of China: The Bubble That Never Pops, said even as the Biden administration returns to a more stable style of diplomacy, tension between the two nations isn’t likely to subside because of widespread anti-China sentiment among the American public and China’s continued economic growth, which challenges U.S. dominance.

Nonetheless, the panelists said, the world can expect to see a somewhat different Sino-U.S. relationship unfold during the Biden administration. Noting that President-elect Biden had identified Russia as the greatest threat to the U.S. while naming China a competitor in a recent interview, Glaser predicted that the new president will seek to find areas of cooperation with the world’s second-largest economy.

“Democrats want to engage China on climate change, global health, and North Korea,” she said. Orlik agreed, adding that under Biden, “There’s going to be procedure, meetings, policies that are announced. They will want to cooperate on North Korea and climate change.”

Even as the U.S. seeks more cooperation with China, many challenges lie ahead. “The overlap between business, markets, and national security is bigger than it used to be,” said Orlik. He pointed as an example to Huawei, the Shenzhen-based telecommunications giant that the Trump administration has singled out for violating U.S. sanctions on Iran as well as posing a potential cybersecurity risk and technological challenge to American competitors.

Glaser raised the issue of corporate espionage and the thousands of ongoing cases related to theft of trade secrets in the U.S. “I can’t imagine the Biden administration will want to dismantle this,” she said. “There’s a lot of concern about theft.”

On the question of China’s crackdown on Hong Kong, Orlik cited reports that high-level officials in the Trump administration had considered “the nuclear option” — sanctions on Hong Kong banks and even a strike on the city’s currency peg to the U.S. dollar — but ultimately decided not to do so because it would harm America’s own interests.

“The Trump administration didn’t go with the nuclear option, and Biden won’t,” said Glaser, “but there is more that can be done. I don’t think we’re going to see any reversal.”

The Trump administration will hold power until January 20, though, and the panelists said new executive orders may be issued in the coming weeks that may cause trouble for the Biden administration.

“There have been rumors about more actions and sanctions regarding Hong Kong and Xinjiang,” noted Glaser, adding that Biden could easily reverse those policies with his own executive orders once he enters office. Orlik commented that such a strategy would be put in place to make Biden look weak on China, yet he said for now  “the Trump camp is focused on the election, not other stuff.”

Even if the Trump administration does manage to issue a flurry of executive orders that Biden reverses, Orlik expressed doubts about the potential negative impacts for the new administration. “I question the political cost of undoing executive orders,” he said. “Will the broader public remember them? I wonder if we’re overestimating the risks.”