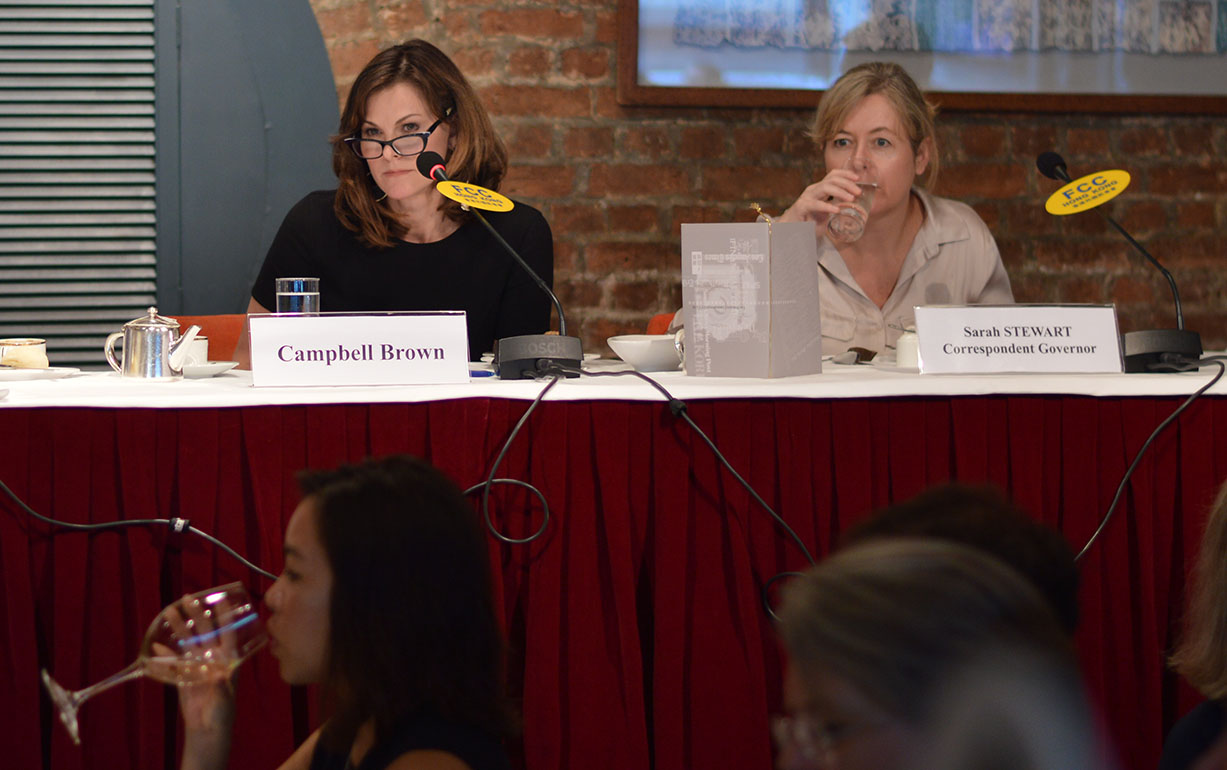 Facebook is working hard to develop systems to combat the tide of fake news – but it’s education among users that will make the biggest dent, according to the social network’s head of news partnerships.

Speaking at the June 14 club lunch, former TV news anchor Campbell Brown, who since January has been Head of News Partnerships for Facebook, said it was important to equip people with the tools make informed decisions on the type of content they share.

Facebook has recently come under fire over the proliferation of financially and politically motivated fake news on its platform. Brown reiterated that the social network was doing all it could to ensure that such hoax stories were downgraded in users’ news feeds.

“Now news literacy is even more vital than ever,” she said. “We can only do so much on the text side… We need to work on the education side. There is no shortcut to this.”

One of several initiatives the social network has launched is the Facebook Journalism Project which, Brown said, works in three ways: collaborative development of news products; training and tools for journalists; and training and tools for everyone. Essentially, it seeks to try to help all users to identify fake news with the help of education, software and fact-checking.

Brown said that Facebook was finding that a growing number of fake news articles appearing online were financially motivated i.e. the more clicks an article gets the more money it makes through advertising. She said the social network recognised the need to build systems that do a better job of rewarding quality journalism. The fruits of Facebook’s labour were already paying dividends, she said, in that clickbait headlines were now appearing lower in users’ feeds.

When asked to comment on how Facebook and internet search giant Google, the two biggest providers of news on the web, were now taking the lion’s share of digital advertising revenue at the cost of news organisations, Brown would only say that Facebook was working with news organisations to try to alleviate the pressure. “We recognise that publishers are struggling and trying to find new sustainable business models,” she said, adding that Facebook was “coming at this from many different directions” and “doing everything we can to ramp up on multiple fronts to work with publishers on this”.

Facebook was founded in 2004 by Harvard student Mark Zuckerberg. Initially it was a social network platform for Harvard students only, but became so popular it was expanded to universities across America and Canada. In 2006 membership was opened to anyone aged over 13 anywhere in the internet-accessible world. As of March 2017, the social network has 1.94 billion monthly active users.

In 2015, Facebook overtook internet search engine giant Google as the premier provider of news on the internet.

Aside from the occasional lawsuit – in 2004, Harvard seniors Cameron and Tyler Winklevoss and Divya Narenda filed an unsuccessful lawsuit alleging that Zuckerberg had copied their idea and illegally used source code intended for the website he was hired to create for them – Facebook had been relatively free of controversy. However, the social network found itself accused of proliferating misinformation during the 2016 U.S. presidential election campaign, giving birth to the now popular term, “fake news”. In short, fake news is deliberate misinformation written in the style of traditional news, designed to mislead in order to gain financially or politically. Facebook was accused, through its algorithm, of helping Donald Trump get elected by allowing fake news to outperform genuine news.

Facebook’s response to its critics was to pledge a crackdown on fake news by allowing users to report articles they felt were misleading, and then passing those stories to independent fact-checking services. If the articles are deemed not to be factual, Facebook gives them a “disputed” tag that warns users before they share the content. It promptly formed the News Integrity Initiative, saying: “We’ve joined a group of over 25 funders and participants — including tech industry leaders, academic institutions, non-profits and third party organisations — to launch the News Integrity Initiative, a global consortium focused on helping people make informed judgments about the news they read and share online.”

“The initiative’s mission is to advance news literacy, to increase trust in journalism around the world and to better inform the public conversation. The initiative, which is administered by the CUNY Graduate School of Journalism, will fund applied research and projects, and convene meetings with industry experts,” its website states.

Facebook’s efforts to stamp out fake news haven’t been all plain sailing. In some cases, it’s had the opposite effect and some articles that have been debunked have gone viral. Additionally, it appears Facebook may be too slow in adding its “disputed” tag to such stories.

According to a report last month in The Guardian: “ABC News, for example, has a total of 12 stories on its site that its reporters have debunked as part of its Facebook partnership. But with more than half of those stories, versions can still be shared on Facebook without the disputed tag, even though they were proven false.”

In March 2017, Facebook issued guidance on how to spot fake news stories:

Look closely at the URL

A phony or look-alike URL (the web address at the top of your browser) may be a warning sign of false news. Many false news sites mimic authentic news sources by making small changes to the URL. You can go to the site to compare the URL to established sources.

Ensure that the story is written by a source that you trust with a reputation for accuracy. If the story comes from an unfamiliar organisation, check their “About” section to learn more.

Many false news sites have misspellings or awkward layouts. Read carefully if you see these signs.

False news stories often contain manipulated images or videos. Sometimes the photo may be authentic, but taken out of context. You can search for the photo or image to verify where it came from.

False news stories may contain timelines that make no sense, or event dates that have been altered.

Check the author’s sources to confirm that they are accurate. Lack of evidence or reliance on unnamed experts may indicate a false news story.

Look at other reports

If no other news source is reporting the same story, it may indicate that the story is false. If the story is reported by multiple sources you trust, it’s more likely to be true.

Is the story a joke?

Sometimes false news stories can be hard to distinguish from humour or satire. Check whether the source is known for parody, and whether the story’s details and tone suggest it may be just for fun.

Some stories are intentionally false

Think critically about the stories you read, and only share news that you know to be credible.