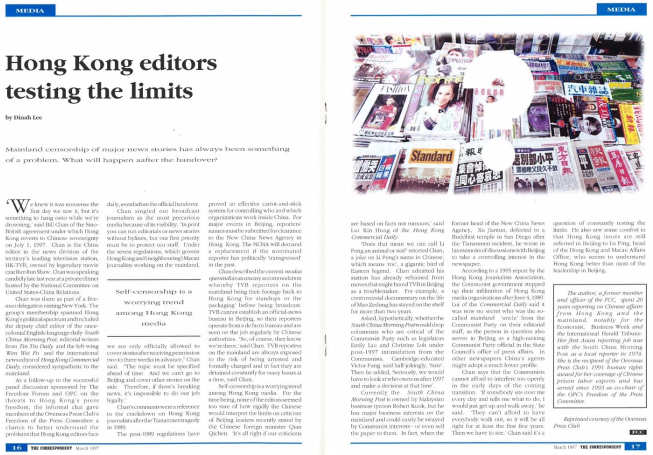 This article is reproduced from the March 1997 edition of The Correspondent.

Mainland censorship of major news stories has always been something of a problem. What will happen after the handover?

“We knew it was nonsense the first day we saw it, but it’s something to hang onto while we’re drowning,” said Bill Chan of the Sino-British agreement under which Hong Kong reverts to Chinese sovereignty on July 1, 1997. Chan is the China editor of the news division of the territory’s leading television station, HK-TVB, owned by legendary movie car Run Run Shaw. Chan was speaking candidly late last year at a private dinner hosted by the National Committee on United States-China Relations.

As a follow-up to the successful panel discussion sponsored by the Freedom Forum and OPC on the threats to Hong Kong’s press freedom, the informal chat gave members of the Overseas Press Club’s Freedom of the Press Committee a chance to better understand the problems that Hong Kong editors face daily, even before the official handover.

The topic must be specified ahead of time… Therefore, if there’s breaking news, it’s impossible to do our job legally.

Chan singled out broadcast journalism as the most precarious media because of its visibility. “I print you can run editorials or news stories without bylines, but our first priority must be to protect our staff. Under the seven regulations, which govern Hong Kong and (neighbouring) Macau journalists working on the mainland, we are only officially allowed to cover stories after receiving permission two to three weeks in advance,” Chan said. “The topic must be specified ahead of time. And we can’t go to Beijing and cover other stories on the side. Therefore, if there’s breaking news, it’s impossible to do our job legally.”

Chan’s comments were reference to the crackdown on Hong Kong journalists after the Tiananmen tragedy of 1989.

The post-1989 regulations have proved an effective carrot-and-stick system for controlling who and which organisations work inside China. For major events in Beijing, reporters’ names must be submitted for clearance to the new China News Agency in Hong Kong. The NCNA will demand a replacement if the nominated reporter has politically ‘transgressed’ in the past.

Chan described the current modus operandi as an uneasy accommodation whereby TVB reporters on the mainland bring their footage back to Hong Kong for standups or the packaging before being broadcast. TVB cannot establish and official news bureau in Beijing, so their reporters operate from a de facto bureau and are seen on the job regularly by Chinese authorities. “So of course, they know we’re there,” said Chan. TVB reporters on the mainland are always exposed to the risk of being arrested and formally charged and in fact they are detained constantly for many hours at a time, said Chan.

Self-censorship is a worrying trend among Hong Kong media. For the time being, none of the editors seemed too sure of how rigidly the Chinese would interpret the limits on criticism of Beijing leaders recently stated by the Chinese foreign minister, Qian Qichen. “It’s alright if our criticisms are based on facts, not rumours,” said Lui Kin Hung of the Hong Kong Commercial Daily.

“Does that mean we can call Li Peng an animal or not?” retorted Chan, a joke on Li Peng’s name in Chinese, which means ‘roc’, a gigantic bird of Eastern legend. Chan admitted his station has already refrained from moves that might brand TVB in Beijing as a troublemaker. For example, a controversial documentary on the life of Mao Zedung has stayed on the shelf for more than two years.

Asked, hypothetically, whether the South China Morning Post would drop columnists who are critical of the Communist Party such as legislators Emily Lau and Christine Loh under post-1997 intimidation from the Communists, Cambridge-educated Victor Fung said half-jokingly, “Sure.” Then he added, “Seriously, we would have to look at who owns us after 1997 and make a decision at that time.”

If somebody sits over me every day and tells me what to do, I would just get up and walk away

Currently the South China Morning Post is owned by Malaysian business tycoon Robert Kuok, but he has major business interests on the mainland and could easily be swayed by Communist interests – or even sell the paper to them. In fact, when the former head of the New China News Agency, Xi Jiantun, defected to a Buddhist temple in San Diego after the Tiananmen incident, he wrote in his memoirs of discussions with Beijing to take a controlling interest in the newspaper.

According to a 1995 report by the Hong Kong Journalists Association, the Communist government stepped up their infiltration of Hong Kong media organisations after June 4, 1989. Lui of the Commercial Daily said it was now no secret who was the so-called mainland ‘uncle’ from the Communist Party on their editorial staff, as the person in question also serves in Beijing as a high-ranking Communist Party official in the State Council’s office of press affairs. In other newspapers China’s agents might adopt a much lower profile.

Chan says that the Communists cannot afford to interfere too openly in the early days of the coming transition. “If somebody sits over me every day and tells me what to do, I would just get up and walk away,” he said. “They can’t afford to have everybody walk out, so it will be alright for at least the first five years. Then we have to see.”

Chan said it’s a question of constantly testing the limits. He also saw some comfort in that Hong Kong issues are still referred in Beijing to Lu Ping, head of the Hong Kong and Macau Affairs Office, who seems to understand Hong Kong better than most of the leadership in Beijing.

The author, a former member and officer of the FCC, spent 20 years reporting on Chinese affairs from Hong Kong and the mainland, notably for The Economist, Business Week, and the International Herald Tribune. Her first Asian reporting job was with the South China Morning Post as a local reporter in 1974. She is the recipient of the Overseas Press Club’s 1991 human rights award for her coverage of Chinese prison labor exports and has served since 1993 as co-chair of the OPC’s Freedom of the Press Committee.