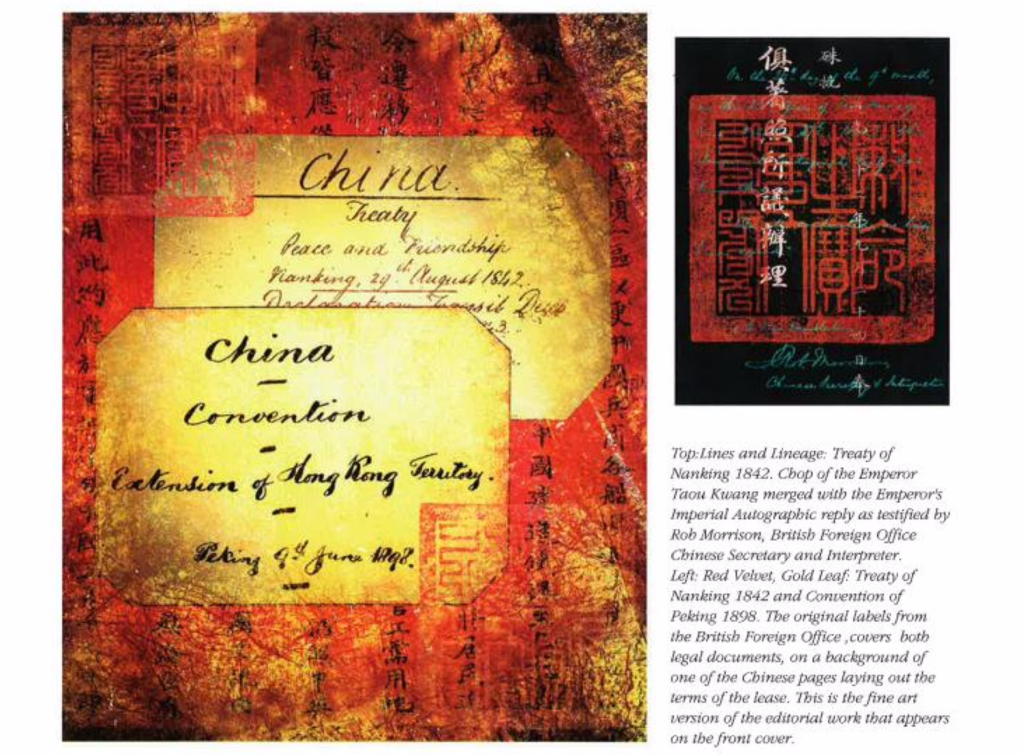 This article is reproduced from the June 1997 special edition of The Correspondent.

The image on this month’s cover is a montage of the original Hong Kong lease and Treaty of Nanjing created by Hong Kong graphic designer and club member Pat Elliott Shircore. It is part of a portfolio of editorial and fine art images that Pat has created from the original documents.

Hong Kong was ceded in perpetuity to Britain under the Treaty of Nanjing in 1842. Half a century later the ‘ownership’ was extended under lease, by the 1898 Convention of Peking, for a period of 99 years. In 1984 Margaret Thatcher’s Conservative government gave up all rights to Hong Kong and as is well documented, on June 30, 1997, Hong Kong will revert to Chinese sovereignty.

In the spring of 1996, Pat was working in her studio at home with the radio on when she heard a news item of no particular interest relating to the handover of Hong Kong, marking the end of the lease agreement with China. It suddenly occurred to her “What does the lease actually look like – physically” and realised that she had never seen a picture of it; so she asked around to see whether anyone else had. People had seen pictures of the 1842 Treaty of Nanjing, but no one had seen the lease.

Research unearthed the fact that there were eight original copies of the document, four in Peking and four in London, so last June she went to London and dug out the British copies.

To her delight she discovered they were not only interesting but also very beautiful. One copy is bound in the Foreign Office standard crimson clothboard, but another lies between two thin wooden boards, covered in silk brocade, lined inside with yellow Emperor silk and tied with yellow silk ribbons.

The documents are a mixture of both English text and Chinese calligraphy, British Royal seals and various Chinese chops amongst which is that of the Emperor Kuang Hsu; main signatories include members of the Tsungli Yamen (Chinese Foreign Office), Claude Macdonald and Lord Salisbury.

Pat returned to Hong Kong with colour copies of the 1898 Convention of Peking (“the Lease”), as well as relevant pages from the 1842 Treaty of Nanjing, and has produced a series of pictures loosely based on these documents. She scanned them into her Macintosh computer and has mixed the Chinese calligraphy, English text, chops, signatures and textures together with her own graphic elements, to create a series of unique digital art images.

Since contributing a set of twenty graphic illustrations to ProFile photo library, intended for use with editorial pieces, Pat has developed the theme much further and has completed a new art portfolio of thirty images that stress the artistic and stylistic beauty of the lease documents. Her work has resulted in strong, almost abstract images of striking colours and subtle textures which will be produced as a Limited Edition of 97 pieces, printed lithographically on fine paper with hand torn edges and bearing the printer’s imprimatur seal, which she will exhibit at the Lan Kwai Fong Gallery, June 24 to July 31 and also at the club itself during the Handover.