News News FCC archives: Not just a so... 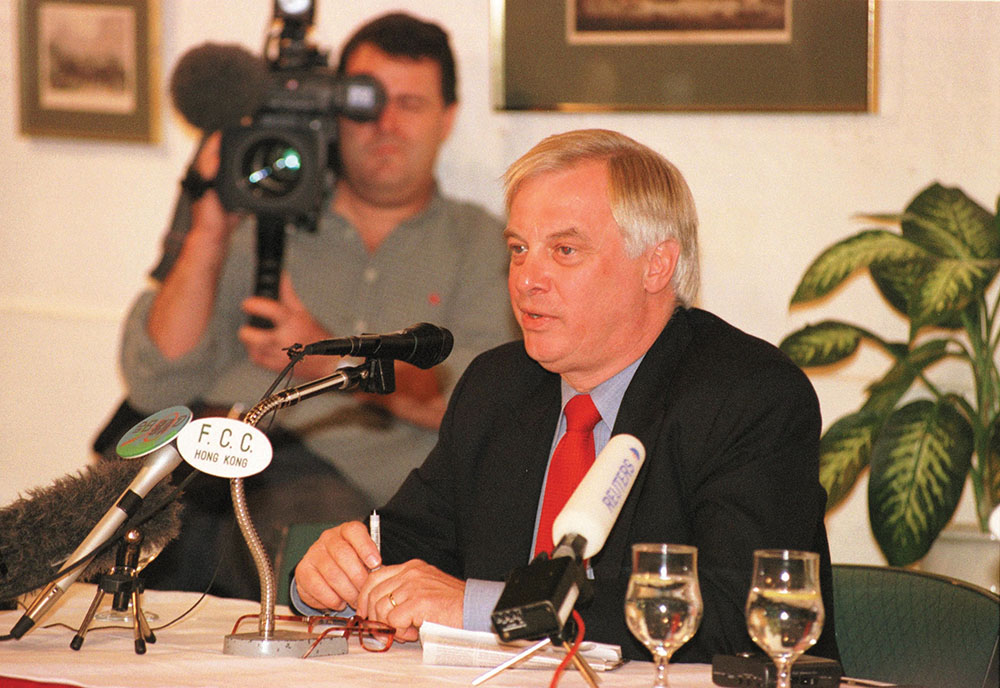 FCC archives: Not just a soundbite – Chris Patten’s plea as the Handover approached

FCC member and Governor of Hong Kong, Chris Patten, asks the world’s press not to forget the territory after the Handover in this piece reproduced from the 1997 special edition of The Correspondent

The journalists are coming. At last count more than 8,400 of them to cover one of the greatest end-of-millennium peacetime stories.

As Anson Chan said in a speech in Manila the other day, if Hong Kong can survive that, the rest should be easy.

But will it? That’s the 64,000 dollar question all those interviewers, commentators, analysts and writers will be posing as they report this postscript of Empire.

I’ve been asked the question a million times already – well, it feels like a million times – and will no doubt be asked again and again before Britannia glides through the great bowl of light that will illuminate our magnificent harbour shortly after June 30 has turned into July 1.

FCC members know my answer pretty well. It is that Hong Kong will go on being one of the greatest cities in the world – provided that the promises of the Sino-British Joint Declaration on Hong Kong’s future are honoured.

I have no doubt that so long as the combination of political freedom and economic liberty, underpinned by the rule of law, is preserved and strengthened, Hong Kong can fulfil its potential as the New York of Asia.

That’s been at the heart of the debate we have been having these last five years. The people of Hong Kong understand that if if some of our critics don’t. Some of them think the 28th and last British governor of Hong Kong should have tip-toed round this issue and gone for a quiet life.

Will Hong Kong remain free? What do you really think of Hong Kong’s future prospects?

That was never an option. The choice was clear cut. Either I stood up for the people of Hong Kong and the freedoms and rights they were promised by Britain and China in the Joint Declaration, at the risk of having the occasional row with China; or I could have done what the Chinese wanted me to do – and spent the last few years in a row with the democrats who, by any measure, represent majority opinion in this community.

What sort of questions would journalists be asking me and Britain now if I had chosen the latter course? I know what those questions would have been and, frankly, I could not have answered them with a clear conscience.

But questions remain, and they will be fired in from every corner of the globe as the transition reaches its midnight climax. Can it work? Will it work? Will Hong Kong remain free? What do you really think of Hong Kong’s future prospects?

I’ll answer as I always do – as a rational and curious optimist with a belief in the people of Hong Kong. They have made this place the spectacular success story it is today and they can go on to a better tomorrow.

They can do that so long as they continue to demonstrate the self-confidence to stand up for their rights, as they did so recently in the face of threats to roll back some of their civil liberties. These are people who know what it’s like to live in a free society.

It will not be for the people of Hong Kong alone to speak up for those rights and freedoms. Britain will continue to do so. So will many others.

The media should keep the spotlight on Hong Kong, too. Not just at the historic moment when the flags change, but in the weeks and months and years – the decades – that follow.

Hong Kong must not be allowed to become a sound bite of history. Don’t forget – none of us should forget – that China has promised in the Joint Declaration to allow Hong Kong to continue pretty much as you find it today for the 50 years up to the year 2047.

Now that’s a story worth watching.

Update: Lord Patten, on June 28, gave an interview to The Guardian where he spoke of a sequence of “outrageous breaches” of the Sino-British handover agreement.

He said: “I don’t think that the outlook outside the European Union is one in which we are more likely to behave honourably towards Hong Kong than we have inside.”

“The worry is that there will never be a point at which we say to the Chinese: ‘No,’” Patten added.