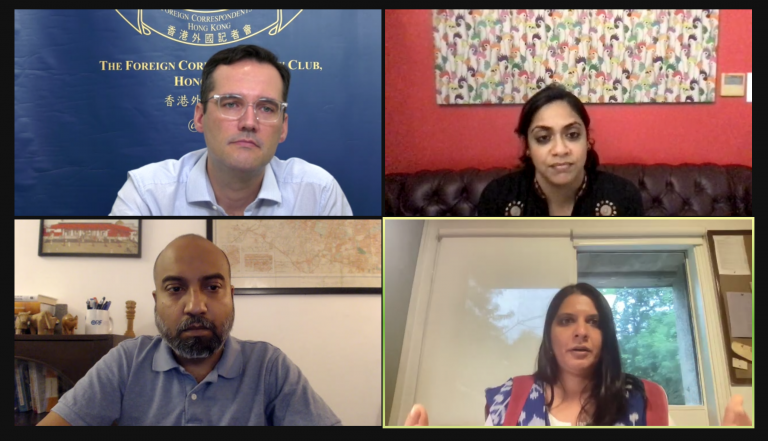 FCC Panel: Lessons Learned From the COVID-19 Pandemic in India

In the spring, distressing scenes of India’s second coronavirus wave spread across the globe, showing hospitals desperately trying to cope with an unprecedented surge in admissions and dwindling oxygen supplies. As a result, experts were left wondering, ‘What could we have learnt from the first wave to more adequately prepare?’, ‘What evidence and logic is guiding decision making?’, and ‘What impact will lockdowns and supply chain disruptions have on India’s already declining GDP growth prior to the pandemic?’

To get answers to these questions, Bloomberg correspondent and FCC Correspondent Governor Iain Marlow moderated an insightful discussion on India’s handling of the first and second waves of the COVID-19 pandemic with a panel of revered experts of global health, public policy and economics.

“To me, in some ways the most visible political act of the second wave that ran thought he month of April and May was the national government completely abdicating itself of all responsibility, and trying to push blame [and] responsibility on to state governments,” said Yamini Aiyar, President of New Delhi’s Center for Policy Research. She went on to discuss the implications of an extreme push toward centralized decision making by Narendra Modi’s government, in a country long governed by complex state and religious laws.

Devaki Nambiar, program head at Australia’s George Institute for Global Health discussed the importance of healthcare infrastructure in handling the COVID-19 pandemic alongside concurrent health emergencies such as a Zika outbreak in Kerala and a Calicut airplane crash, as well as “extraordinary exclusion[s]” stemming from English-based vaccine registration platforms “in a country where just about 4% of the rural population has access to computers.”

Mihir Sharma, Bloomberg Opinion columnist and research fellow at India’s Observer Research Foundation, outlined the challenges of surveying India’s large informal workforce noting, “We’re probably not going to know for the next 6-8 months exactly what the situation is in terms of employment and welfare on the ground”.