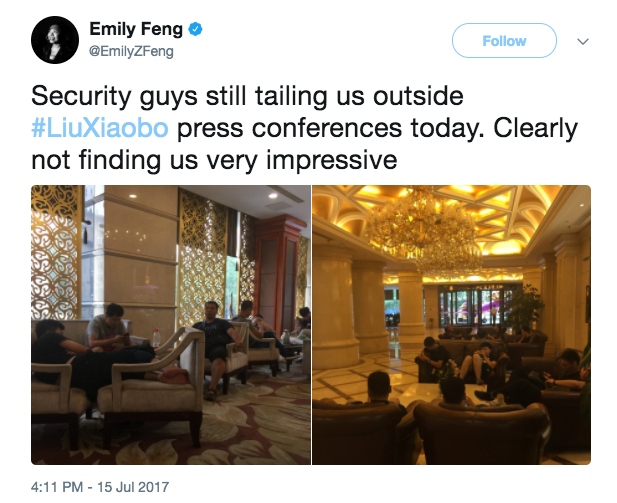 The FCCC is concerned by reports that foreign journalists in Shenyang covering the death of Nobel Peace laureate, Liu Xiaobo, have been harassed and intimidated by plainclothes security officers.

Reporters “were escorted everywhere by plainclothes men, who shamelessly followed them into restaurants and even bathrooms,” according to one report.

Another journalist said: “I entered the hotel lobby to catch a taxi. Four plainclothes state security officers, all men and wearing black, were already waiting. They asked me where I was going as well as where my friend, a photojournalist, was going. I ignored them. Shortly after I showed up at a nearby press conference hastily convened about Liu Xiaobo, the same men were already waiting in the hotel lobby. They stayed there for the rest of the day, glancing over at us periodically, about 15 feet away. They would follow us as we went to the bathroom or make calls outside.”

Further details described in the Tweets below have caused us concern.

The FCCC calls on the Chinese government to take steps to prevent foreign reporters from being subjected to such intimidation.

Oh, just a casual smattering of a dozen+ plainclothes men at the #LiuXiaobo presser. Most turn their backs to hide their face when filmed pic.twitter.com/zbolgmUK7l

Security goon still tailing me as I leave shenyang. Two days of surveillance exhausting. Can’t imagine what #LiuXiaobo and Liu Xia went thru