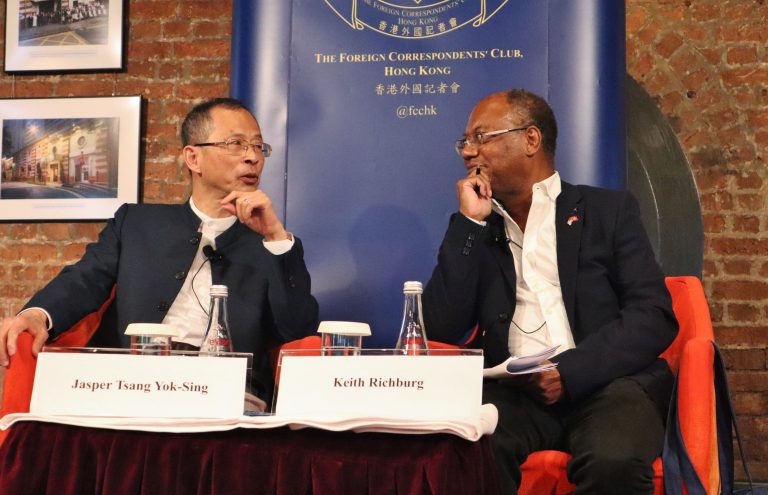 Former Legislative Council President and veteran pro-Beijing politician Jasper Tsang said he believed many members of the rival pan-democratic camp “satisfy the requirements to be patriotic,” but he said many of them failed to draw a line between themselves and the radicals.

Tsang called for the pan-democrats to reorient themselves and find new roles. He was previously quoted saying one sign of the success of China’s “one country, two systems” governing policy over Hong Kong was whether Beijing resumes dialogue with the pan-democrats.  However he told a luncheon crowd at the Foreign Correspondents’ Club Hong Kong on July 7, 2022 that “the timing is not right yet” to open a dialogue because the city was still recovering from the upheaval.

The 47 targeted, Tsang said, “were arrested and may be prosecuted because of suspected offences defined in the new NSL, four very specific offences and very clearly targeted. Either you sort of call for Hong Kong independence to try to break Hong Kong away from China, or you want to subvert the so-called government institutions. And most of them were suspected of having committed this offence.”

“What they told the public was, look, we’re gonna win the majority of the seats in LegCo and after that, we will make the government accede to our political demands,” something which Beijing considered a grave threat, Tsang told the luncheon gathering.

Tsang said people involved in the 2019 extradition bill protests were not conscious of being manipulated by foreign powers, but that many politicians in United States had spoken in support of the protests and said Hong Kong people are fighting for democracy.  He also said protest leaders were received by top U.S. officials in Washington and that American officials had bragged to him about fomenting similar “colour revolutions” in other Asian countries he did not name.

Asked to share information with the audience of any proof of involvement by foreign forces, Tsang replied, “I don’t know. It’s pure logic. Pan-democrats would be angry at them too, if they (the foreign powers) had done nothing.”

Tsang said he regretted many young people engaged in violent acts during the 2019 protests and were now in prison and with arrest records.  He said it will be up to the Correctional Services Department to help integrate those young people back into society.

Tsang also encouraged the FCC to invite Chief Executive John Lee Ka-chiu to speak at the Club and to take questions.

To watch the whole talk, please visit the FCC’s YouTube channel on youtube.com/fcchkfcc.